It’s 12:30pm: Break time is over. We strap on our kneepads, grab our buckets, and head to the macadamia nut orchard. We spend almost three hours every afternoon on all fours—tossing the bad nuts, picking up the good ones, and trying to fill as many bags as possible (as to not be reprimanded for a poor day’s work). Eventu-ally, these nuts would land at the farmers market, retailing for $16 per pound—and we’re doing the work for free. Why?

For me, this all started with a community garden plot in Oakland, California. I spent the summer of 2015 googling double-digging techniques, ways to keep Bermuda grass (kind of) under control, and how much water I could use without feeling drought-driven guilt. Who knew I’d find my happy place covered in dirt?

Fast forward a few months, and I’m on a one-way flight to Kona. My little passion for gardening had driven me to downsize every-thing—including a full-time job, apartment, and wardrobe—for a farmhand gig on Hawaii Island. I had found and interviewed for this job through an organization called WWOOF (World Wide Opportunities on Organic Farms). The plan was to exchange 25 hours of labor per week for room and board—and hopefully to get schooled in organic farming—while having spare time for my free-lance writing.

For a yearly fee, WWOOF acts as the liaison between farms and workers—but doesn’t necessarily have regulations or certifica-tions in place for either party. From adventure-seekers and artists to freelancers and retirees, the average age of Hawaii’s WWOOF-ers is between 18 and 25, but there are active members in their 50s and 60s. In exchange for work, the host farms must provide certain essentials, like shelter and food. A win-win? Maybe.

Symbiotic relationships are a special type of interaction between species. Sometimes helpful, sometimes harmful, these relation-ships are essential in nature, and they provide a balance that can only be achieved by working together. The structure of WWOOF, and other work-trade programs like Workaway and HelpX, have a mutually beneficial intent, but what happens when they result in something else?

“Would you like to sample our lilikoi butter? We make it fresh every week at our organic farm just up the road.” We’re at the farmers market just south of Kona, and Kelsey repeats her script-ed pitch to every passerby, just beginning her shift standing in the searing Hawaiian sun. Some stop, some walk hastily past this clear selling tactic. “Oh, this tastes just like a lemon curd that I make back home,” says an excited tourist from England. “Exactly, it’s made the same way, except we use passion fruit juice!” One of our hosts overhears. She promptly walks up with a cup of water, takes a handful, and splashes it in Kelsey’s face. “I told you not to call it curd, it’s butter!” she snaps. But she had that conversation with me last week—not Kelsey. These types of interactions were all too common. 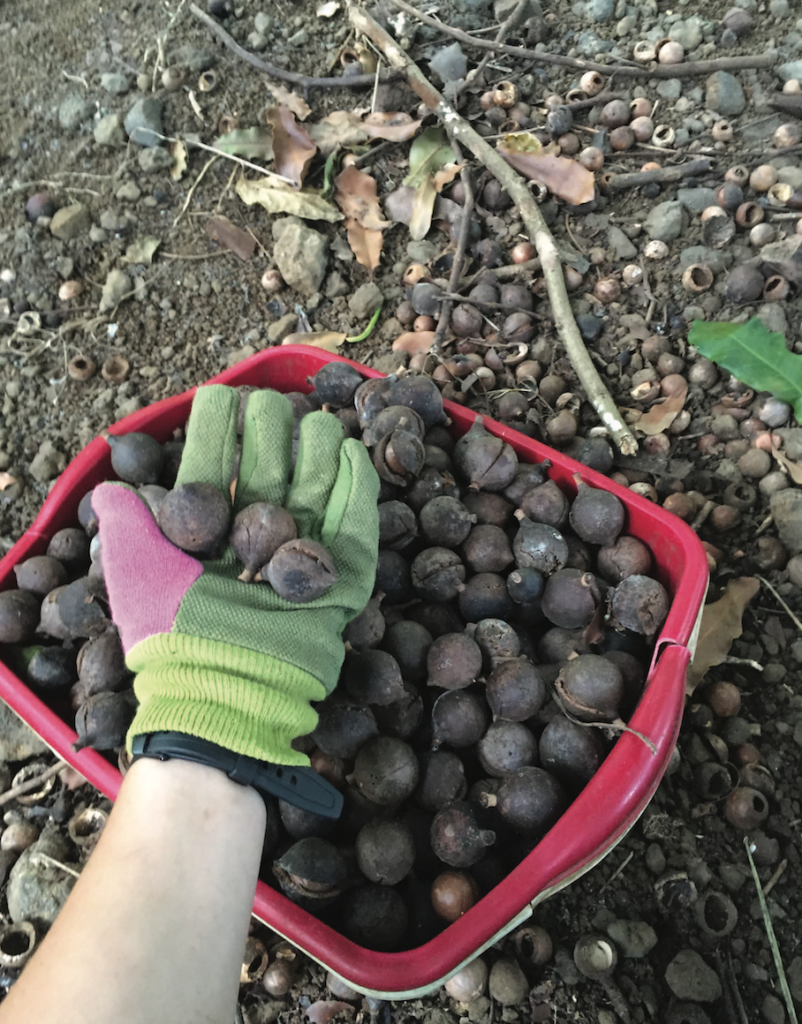 Meanwhile, in the Puna district, Gina had just stepped off the plane from Vancouver, Canada. “We arrived during the night, stumbling over tools and debris of half-finished projects. My host showed me to my sleeping area, a large tent on a raised plywood platform, with a tarp over top and a sheetless mattress inside,” she recounts. “What he had established was a homestead, and by no means a farm.” Over the next several weeks, it was clear that Gina was brought on more to help with home improvement projects, and less to be taught about farming. And when her host abruptly decided to leave for a month—with the offer for Gina to tend to his property by herself—she knew it was time to leave.

Did we know what we were getting into? Somewhat. (There was no review system on the WWOOF Hawaii website when we first signed up, but there is now.) Do we feel fortunate to have lived in Hawaii, rent-free? Every day. But the monotonous labor, unclear boundar-ies, and emotional degradation that we endured was unexpected. However, not all experiences are created equal, and work-trade op-portunities have also enriched many lives and allowed businesses to stay afloat.

“I’m no stranger to getting my hands dirty,” says Kevin, a Lake Tahoe native and artist. But when he first arrived to Hawaii, he had no inten-tion of working on a farm. His friend from home was caretaking a bed and breakfast on Hawaii Island, which informally hosts work-trad-ers. Upon visiting her, he was drawn to the land and decided to stay. Tasked with helping out at the B&B and surrounding property for a few hours a week, he picked a spot down the hill to hang his hammock, and was told to use the land in any way he needed. Some of the other workers lived in tents, a few in shipping containers. One worker lived in a dilapidated bus, whose exterior became a collabo-rative art project among their community. Kevin, who now works at a wood shop on Hawaii Island, says that he has been able to survive (and thrive) in these types of environments because of his adaptabil-ity. “It’s a really beautiful thing,” he says. “When you live that inti-mately with the land, you just kind of learn to grow with it.”

An offshoot of their international parent organization, WWOOF Ha-waii’s website states, “If you are looking for people to come work on your farm, WWOOF is not the way to do this. You should then hire employees and follow state guidelines. Your guests are not workers and should not be treated as such.” With over 250 registered farms spanning the islands, WWOOF does play a significant role in the farming industry. (They also have upwards of 2,000 active members who come to the islands each year.) 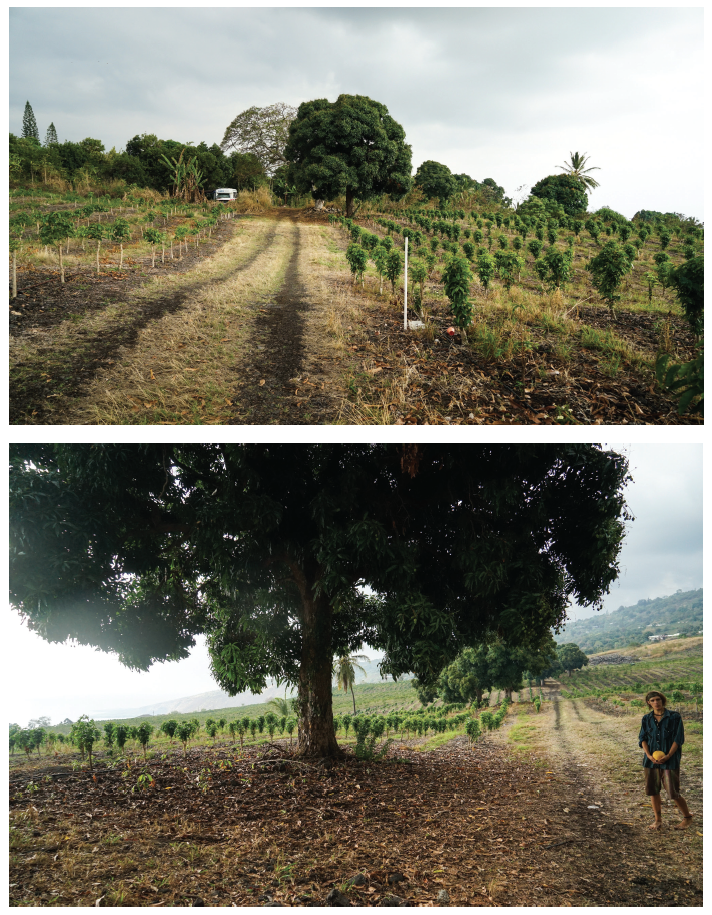 Let’s look at simple cost-versus-benefit breakdown, at Hawaii’s current minimum wage of $9.25 per hour. The maximum number of hours set forth by WWOOF is 25 hours per week, which equals around $693 per month. For those sleeping on wooden platforms or in small cabins and receiving only surplus fruit and basic food items, farm owners are able to drastically cut operational costs. On the flipside, hosting work-traders can be a risky business. And hosts have to train a new set of people every three months or so, which doesn’t necessarily result in more productive or lucrative venture. “What really makes a WWOOF host successful is their ability to make an impact on the world by sharing their passion with others,” says a WWOOF Hawaii administrator.

There is one common thread that weaves these stories together. We all feel the work we did was real and meaningful. Millennials are often criticized for being materialistic, for lacking humility. Maybe, for me, this was a little about bucking those stereotypes. I wasn’t looking for a participation trophy: I was looking to change my life. The character that was built, the deep appreciations I de-veloped, and the relationships that I cultivated (both with people and the land) could never have been accomplished from a cubicle. Looking back, I wouldn’t trade my work-trade experience for any-thing—probably not even a paycheck.