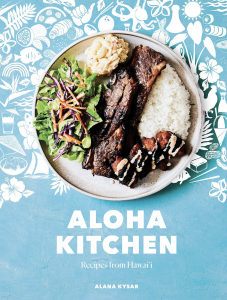 THE Hawai‘i DEPICTED ON TELEVISION and in film, on people’s Instagram accounts during and post-vacation, in advertisements and commercials—that Hawai‘i does not exist. Hawai‘i is wildness and scent and taste, smoke and lava and sweat and the pounding of poi, Hawai‘i is the wai, the water, thrusting through valleys, Hawai‘i is a collision of flavor born of the cultures that arrived here over the past centuries. And Hawai‘i is rarely depicted as holistically—or as deliciously—as it is in Maui native Alana Kysar’s debut Aloha Kitchen: Recipes from Hawai‘i (Ten Speed Press, 2019).

Aloha Kitchen delivers a visceral experience of the islands through photographs, food, and stories, tracing the culinary bloodlines of seven distinct regions of influence that inform local Hawai‘i cuisine. From native Hawaiian and Japanese to Filipino, Chinese to Portuguese, and Korean to European, Kysar reveals the imprint of immigration, colonialism, and plantation life on food in Hawai‘i, past and present. With a deft history lesson, Kysar illuminates Hawai‘i’s journey to statehood, and, for readers unfamiliar, clarifies the difference between local food (the food resulting from Hawai‘i’s collective regions of influences) and native Hawaiian cuisine—while forever abolishing the fetishization of “Hawaiian” food as anything containing ham or pineapple.

Kysar herself grew up in Kula, Maui, where the flavors of her Hilo-born, Japanese-American mother’s mochiko chicken and her Californian father’s taste for French fare informed her competence and creativity in the kitchen. After solidifying her eye as a photography coordinator at Williams-Sonoma, Kysar created Fix Feast Flair, a food and travel blog that showcased an uncommon talent. In 2015, Kysar’s stunning photography and distinctive recipes garnered her a SAVEUR magazine Blog Awards win for Best New Voice. But the more immersed Kysar became in the world of food media, the more she recognized the need for a cookbook that properly represented the food that informed her most intrinsic culinary proclivities: local Hawai‘i food.

In Aloha Kitchen, Kysar presents a work unrivaled in its ability to catalog and represent the diverse culinary voices that comprise local Hawai‘i cuisine. Kysar’s humble voice, generous spirit, and meticulous, approachable recipes—from classics like lomi salmon and the anatomy of a plate lunch to deep cuts like squid lū’au, pansit, and cascaron—make it an instant classic.

The book opens with stunning vistas of Hawai‘i’s backyards and shorelines, evoking the local lifestyle its pages so effortlessly embody.

Kysar describes: The aloha spirit…‘is the coordination of mind and heart within each person. It brings each person to the self. Each person must think and emote good feelings to others. Aloha must be extended with no obligation in return, and to live aloha, you must ‘hear what is not said, see what cannot be seen, and know the unknowable.’

Aloha Kitchen carries the potency of this charge to live, forge relationships, and cook “…placing the aloha spirit at the core of relationships and actions.”

Kysar’s Aloha Kitchen is a gift to Hawai‘i, and anyone lucky enough to taste the food that embodies the state’s history, diversity, and power. Welcome to the Aloha Kitchen: You won’t ever want to leave. [eHI]