Along a stretch of neglected pasture land bordering the highway, the castor bean plant fans out under the sun, nurturing poisonous clusters of small, spikey seed pods. Nearby, the Sacramento bur, not to be outdone by the castor bean, primes its own prickly, irksome burs for seed dispersion. Nasty as these two plants may be, neither can trump the ambition of the haole koa, a prolific roadside shrub distinguished by its flat, brown seed pods. Haole koa can thrive in the most depleted of soils, often reaching heights of 15-20 feet.

This scene is a nightmare to native plant enthusiasts, farmers, and highway maintenance crews alike. Whether bemoaned as an invasive species, a tenacious weed, or an obstruction to sight-lines, it’s easy to agree that these plants are a nuisance. There is someone, however, who sees things in a different light — someone who sees an all-you-can-eat feast where the rest of us just see problems. Enter our humble, hungry hero: the goat.

Recent elections on Kauai, Maui and Hawaii Island have shown that the public is wary of pesticide use. With the recent Ninth Circuit court ruling that all pesticide regulation must happen at the state level, individual islands have begun to look for ways to decrease their pesticide use at the county level. Translation? If an island can’t ban the use of potentially dangerous pesticides outright, they can at least advocate alternative, “green” practices in the county-run areas they do have control over- namely county parks and roadways.

On Maui, Autumn Ness, executive assistant to Councilwoman Elle Cochran, has been whittling away at the pesticide issue for years. In early 2017, Ness began a dialogue with a mainland non-profit called Beyond Pesticides, after reading that they had helped Reno, NV transition to pesticide-free city parks. It was Beyond Pesticides who suggested the Department of Transportation (D.O.T.) could utilize a herd of goats to manage weeds along the highways.

Though the D.O.T. has used Roundup in the past to manage roadside vegetation, it’s been over two years since this pesticide was employed. Former D.O.T. Construction and Maintenance Superintendent for the Maui Highways Division, Steve Rodgers, discontinued the use of Roundup along roadways in 2015 after the D.O.T. received numerous complaints from the public, and one formal warning notice from the Department of Agriculture citing them for violation of pesticide law. Under Rodgers, the D.O.T. transitioned to using an organic pesticide called Avenger, and increased manual cutting/weed-whacking. When Rodgers retired, his duties were shifted to Donald Smith, who was the Maui District Engineer at the time. Smith largely continued along the trajectory Rodgers had set, and it was he who okayed a pilot program to test the viability of goat weeding.

Belonging to a subsect of herbivores known as browsers, goats prefer to eat the leaves, bark and new shoots of woody plants (as opposed to grazers like cattle, sheep, and horses which prefer to eat grasses). The goat’s digestive enzymes differ significantly from that of other livestock allowing it to eat many plants that are dangerous to other animals. Known to eat 25% of its body weight each day, the goat’s mighty appetite also marks it as a prime candidate for large scale weeding projects.

The idea of goats weed-eating the highway was clearly delightful, but was it practical? Beyond Pesticides donated a portable electric fence and paid for the services of Lani Malmberg, professional gypsy goat herder, but the project still needed a herd of goats to get going. Many island ranchers were unwilling to participate in the experimental project for fear of their goats’ safety, but finally a father and son pair, Paul and Kory Lopes, stepped forward with a 50-head herd.

Paul Lopes, an experienced Maui livestock operator, had used goats and sheep to clear pasture land for private projects many times before, so this wasn’t a new concept to him. He did have some reservations about browsing the herd so close to a busy road (citing theft as a primary concern), but after Malmberg assured him that she would personally reimburse him for any lost goats he agreed to rent the animals out for seven days.

With twenty-two years of goat herding under her belt, Malmberg was confident in her ability to keep the Lopes’ goats safe. Malmberg first learned about the weed-eating potential of goats while earning her Master’s Degree in Weed Science from Colorado State University. Under the business name of Goat Green, Malmberg and her herd of goats travel up and down the western half of the United States working on an array of environmental stabilization projects including reclamation and re-seeding of oil fields, fire and erosion mitigation, flood control, and, of course, weed control.

“A weed is just a symptom of an underlying problem,” Malmberg says. She explains that weed problems often have their roots in human behaviors, such as over-grazing cattle, or repeated chemical pesticide treatment. By using goats to eat the weeds she says she’s “applying a counterbalance to what caused the problems in the first place.”

Goats go beyond mere weed-eating; they also fertilize and aerate the soil, recycling nutrients back into the earth and leaving the land healthier than it was when they arrived. This cuts down on the amount of time and money that would go into amending the soil in preparation for new plantings. Goat weeding can even reduce future irrigation costs. “Organic matter is what holds water in the soil,” explains Malmberg. “For every 1% you increase the organic matter in the soil you can hold another 25,000 gallons of water per acre.”

Maui’s goat pilot program was a success. The herd ate all the targeted weeds, and even worked on some the cane grass within their enclosure. They did adjust to the nearby traffic and eventually became comfortable browsing right alongside the road. None of the animals escaped or came to any harm.

Autumn Ness explains that many of the weeds encroaching on our highways are tall, invasive species that easily grow to block sight-lines. “The long-term goal would be to have goats work on the same stretch of highway three times in one year and then have volunteers… go in and replant that area (because now the soil is fertilized and tilled) with a low-growing, sprawling native, and then the D.O.T. doesn’t have to worry about that, we’re taking it off their To-Do list completely! That’s the goal. The state highways could be native plant corridors throughout the islands.” It seemed we could be onto something.

And then – the Department of Transportation stopped cooperating. When Donald Smith moved on to a new post in the summer of 2017, Robin Shishido was appointed to take his place. Upon assuming control of the highway maintenance program, Shishido promptly ordered 42 gallons of Roundup with the intention of reintroducing the pesticide to the county roadways. At the time of writing, Shishido remains unsupportive of the goat tactic and will not allow this program to move forward within the D.O.T.

A SHIFT IN HOPE

Even with the D.O.T. withdrawing their support, all progress is not lost. In May of 2017 Beyond Pesticides visited Maui to lead a series of workshops focused on large-scale organic maintenance. Employees of the Maui County Parks and Recreation Department received training sessions to help them embark on a one-year, pesticide- free pilot program in four island parks. There is even some talk of using the goats within the parks. Another training, open to any interested landscape managers and staff of island resorts, golf courses, schools, apartments, and landscaping companies, was widely attended.

One such advocate of green practices at the corporate level is Duane Sparkman, Engineering and Landscape Manager of The Westin Maui Resort & Spa. Sparkman began phasing out chemical pesticides at The Westin Maui in 2013 when the Coral Reef Alliance approached him with concerns about chemical runoff from the resort entering the ocean. Sparkman’s commitment to sustainability efforts has helped The Westin Maui emerge as a corporate leader in the integration of these organic methods, earning the resort an Ocean Friendly Business recognition from the West Maui Kumuwai. Practices include, recycling the resort’s green waste into mulch and compost, using more drought-resistant, native plants in landscaping, and utilizing only organic herbicides and pesticides.

Sparkman’s dedication to this issue has marked him as a valuable mentor within the local community. His experience dealing with these issues at a corporate level translates well to the county initiatives Beyond Pesticides has been facilitating, and he’s been assisting with the pesticide-free parks program. “The bigger picture,” he says, “Is to protect the environment and the people that live here… Maui County can become a pinnacle of organic applications and maintenance.” The Westin Maui serves as a shining example that these methods can see great success, even on a large scale.

The days of living in a segmented world driven by profit and the pursuit of individual goals must come to an end. A safe, weed-free roadway doesn’t do any good if the people who travel on it get sick from long-term exposure to Roundup. Earth, ocean, people, and plants, are all components of a whole, living system; there is no success for one at the expense of the others. A goat-based weeding program is exactly the type of symbiotic relationship that would honor this system and benefit all. One man’s weeds are another goat’s meal. 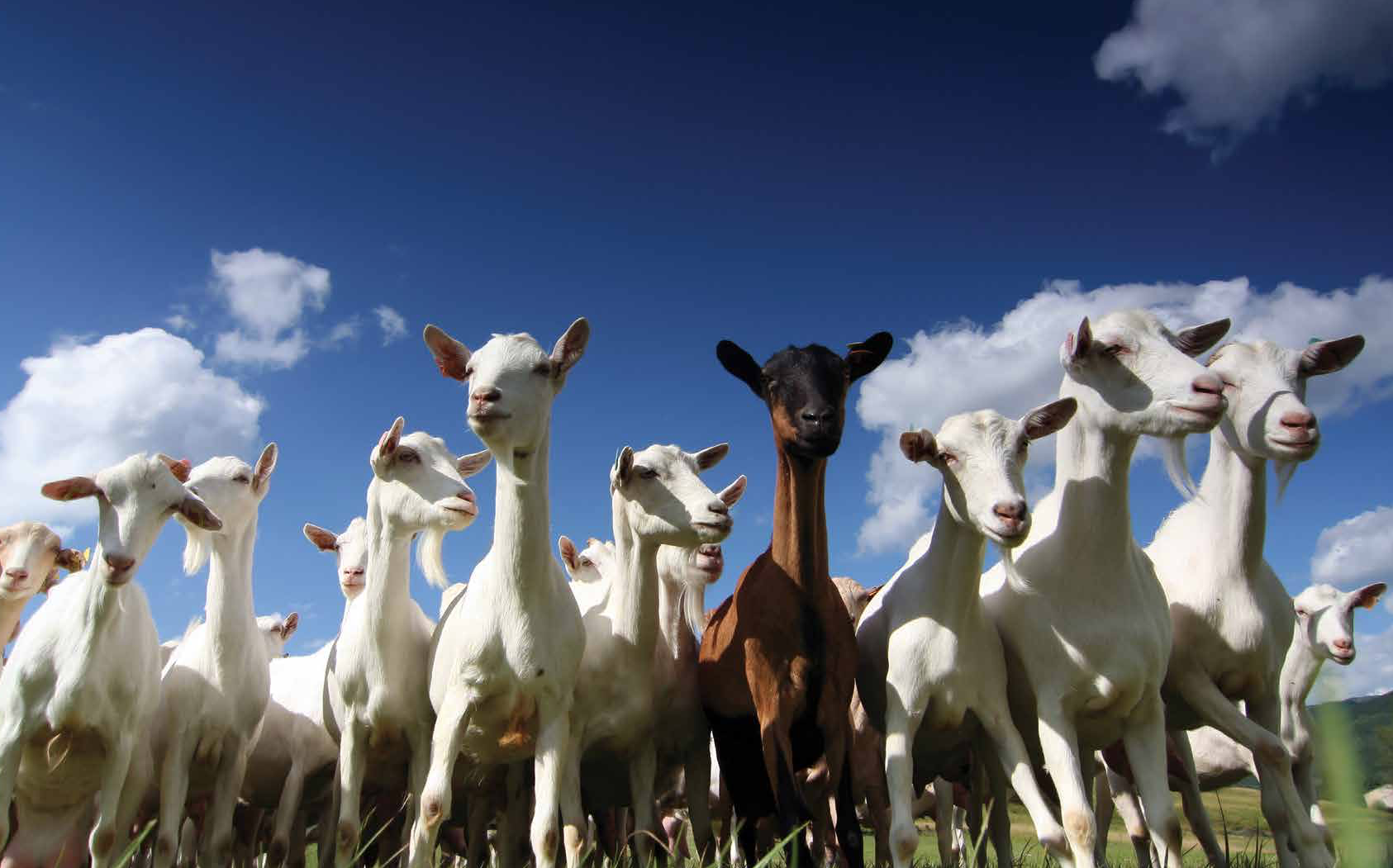