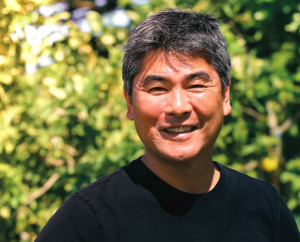 Roy Yamaguchi is a phenomenon: An international culinary creator and visionary of Hawaiian fusion cuisine; recipient of the prestigious James Beard Award; television host of “Hawaii Cooks with Roy Yamaguchi,” airing in more than 60 countries; cookbook series publisher and founder of a rather significant collection of restaurants including 30 Roy’s Restaurants in the United States and Guam, the now closed Tavern by Roy Yamaguchi and his latest creation, Eating House 1849, he’s pretty much killing it. And rightly so, considering his pragmatic approach to his work.

“How do I do it?” He asks, “I just put my head down and I do the work. I never look up. I never ask myself ‘why.’ I don’t ask any questions. And I never take any of it for granted.”

The menu for this latest venture Eating House 1849 in Kaua‘i took two years to conceptualize, a testament to the quality of both care and resolve given to his work.“I knew that our Roys’ lease was going to be ending over in Po‘ip–u, and I had already begun dreaming up a new concept based on Peter Fernandez’s mid-1800s style of using only what was available from local farmers, ranchers, foragers and fishermen,” he remarks.“When I had a chance to shop at The Shops at Kukui‘ula and saw the surroundings, it really kind of fit everything into place.”

Yamaguchi’s idea is to take the Portuguese – Filipino flair of Roy’s and blend it with American cooking. “What you see on the menu today is only about 10 percent a reflection of what it looked like a few years ago,” he reveals. “It’s gone through a lot of transitions of writing, tweaking, tasting, executing and starting the process all over again until it’s right.”

In this case,“right” is not tuned to a creative vision per se,but the inextricable link between taste and memory. “My grandfather worked on a Maui plantation and ran a restaurant in the 1940s,” he recalls. “I remember visiting him during our summer vacations and eating his plantation paella, a Hawai‘i-style approach to a traditionally Span- ish dish. Generally paella is more or less a dry, rice dish, but my grandfather would start his off with a tomato base and make it very brothy and rich – more of a stew or a soup. I remember he used to make this for the farmers, served up in a cast iron dish. It brings back a lot of memories.”

Chances are,Yamaguchi has also created a taste memory for you as he attributes any success he has had to the community at large with whom he feeds, employs and otherwise intermingles. “No, my inspiration doesn’t come from food; it isn’t a question of what I eat periodically,” he says.“I get inspired every day that I work. From colors that I see to textures that I feel to people that I meet. It’s not about food- it’s about life. And no B.S.”

“Many years ago we tried to figure out what Roy’s really is,” he goes on to explain.“It’s about ‘No B.S.’ We have a job to do. We have our missions. On a day-to-day basis, we’re cooking for guests. We want to make sure that our staff is happy and we treat them with respect. We want to take care of our guests’ needs with a ‘get the job done’ attitude, and deliver a wow factor that we hope will get them to come back.We operate such that what we did last night determines how successful we will be today. We have to prove ourselves over and over again on a sec- ond-by-second basis. Their perception could change within seconds! So we take care of each and every guest.”

And with this, I realize that Roy and I are both exhaling; caught up in a moment of excitement for what he very clearly has a passion and a calling for: Quality.

I release him from our discussion with one final question: “What’s the best thing that happened to you all week?”

He repeats my words.Twice. Mulls it over and states plainly, “I got home yesterday after four days on the main- land, all business, opened the fridge, grabbed some leftover dim sum, ate that and relaxed.That was nice.”