It’s 4:45p.m. on Tuesday, and the night is about to start at Mud Hen Water. Staff members crowd around a laminate turquoise table like a large family – laughing, listening, planning. A smoky coal aroma tickles the nose, and music bounces off concrete walls. Light bursts in as a giant garage-door wall is raised, opening the building to Honolulu air. Next door are big brother and big sister restaurants Town and Kaimuki Superette. All three are part of Ed Kenney’s culinary family, and together they champion a vision for local food that Kenney – simultaneously chef, restaurateur and local food leader – let loose over a decade ago.

Outside, Wai‘alae Avenue (wai‘alae, literally “the waters frequented by the mudhen,” and thus the restaurant’s name) hums the tune of rush hour. Five o’clock is here. Suddenly the turquoise table is cleared. The bar fills, families are seated, and the Mud Hen turns to greet its guests.

Mud Hen Water’s menu is thoughtful and complex. If not on their single-page, ever-rotating menu, then in the words of those preparing and serving it. General Manager Jordon Joern describes the preparation of their I‘a Lawalu with the detail of someone recalling the best wave they ever rode: local a‘u ku– is wrapped in a banana leaf, nestled next to veggies (local) and a green banana tamale (inspired by Puerto Rican cooking introduced during plantation days), then soaked in house-made coconut cream (they use the whole coconut in their kitchen, husk and all) and finally buried in coals of kiawe (a good use of an invasive plant) to slow cook on the hearth in traditional lawalu style. “These are all the flavors Ed remembers as a kid,” said Joern.

“These ideas have been running through his head for the past 15 years, and he’s finally been able to bring them to life with Dave – they’re brilliant together.” (David Caldiero is Kenney’s collaborating chef.) “It was a risky move, but they did it, and now all these local Hawaiians have said, ‘Yeah, this reminds me of my grandma’s kitchen, this is so familiar to me.’”

Each dish, mostly tapas-sized, builds on old Hawaiian ways of cooking and familiar island flavors, and then re-imagines them in a local, sustainable, radically minimal-waste kitchen. Veggies come straight from local farms that Kenney helped keep alive a decade ago, before “farm-to-table” was hyphenated. Fish on the menu are paired with a code that diners can scan with their smartphone, leading them to where their dish came from – and even who the fisherman was. Hummus is made from koena, the starchy part of the kalo (taro root) that is usually thrown away when making poi. And even the bar works to repurpose kitchen leftovers. 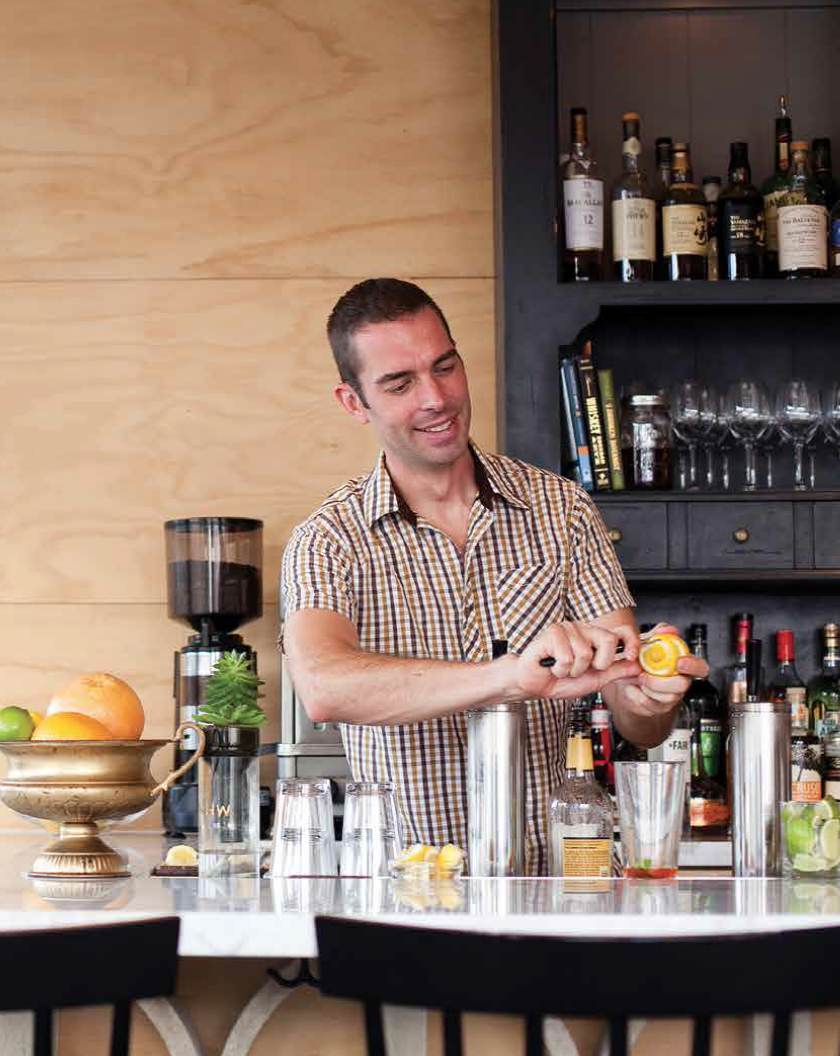 “The Kitchen Cocktail started with me thinking how we could use potential waste in a productive way,” said Kelly Jeffers, Bar Manager. “I use extras from the farm to create a new cocktail daily or weekly to pair with specials on the menu. A lot of people come in and ask for that as soon as they sit down – they love tasting what’s new.” Jeffers is also very proud of what’s behind the bar. “The team was really willing to go out on a limb with me in buying local and environmentally- conscious spirits and liquors. I love having these to work with. High quality ingredients aren’t quick or cheap, but using them comes down to passion. And as a team we’re definitely passionate, willing to put in the time, and see that vision to fruition. ”

The thoughtful vision of Mud Hen Water’s dining and bar menu is impressive, yet one gets the feeling that neighbors would still flock, even if food wasn’t being served. A sense of place, warmth and ideas is nearly palpable between the cinder block bar, reclaimed floor and smoking coals on the hearth.

Regulars here, as well as the farmers, and the entire Kenney staff, are referred to as “Townies” – and treated like family. “Every night at our family meeting we discuss the Townies coming in and how we’re going to make their night great,” said Joern. The familial spirit goes both ways. “People come in and give really good feedback, and Ed is really receptive to that. He’s happy to take feedback, experiment with it, and improve the menu.”

One thing is clear. “This isn’t just a job to us,” said Joern, with enunciated emphasis. “This a choice of a lifestyle, and our collaboration just happens naturally – if you care about something, you’re going make sure it flourishes.” Jeffers readily agreed. “Everybody – host to sous chef – shares that same passion. Ed and Dave exude this love for what they do, and it’s just contagious.”

On the southeast, open-air side of the restaurant, a massive mural presides over repurposed picnic tables. Painted by Swedish artist Case following the Charlie Hebdo tradegy, three brightly-colored hands interweave into a peace sign – a representation of how a community supports freedoms, freedoms support values, and values support community. Below the hands, Mud Hen staff whisk by with hot plates. A laugh is shared with their Townies. And Kenney’s vision is realized, in big ways and small, one night at a time. 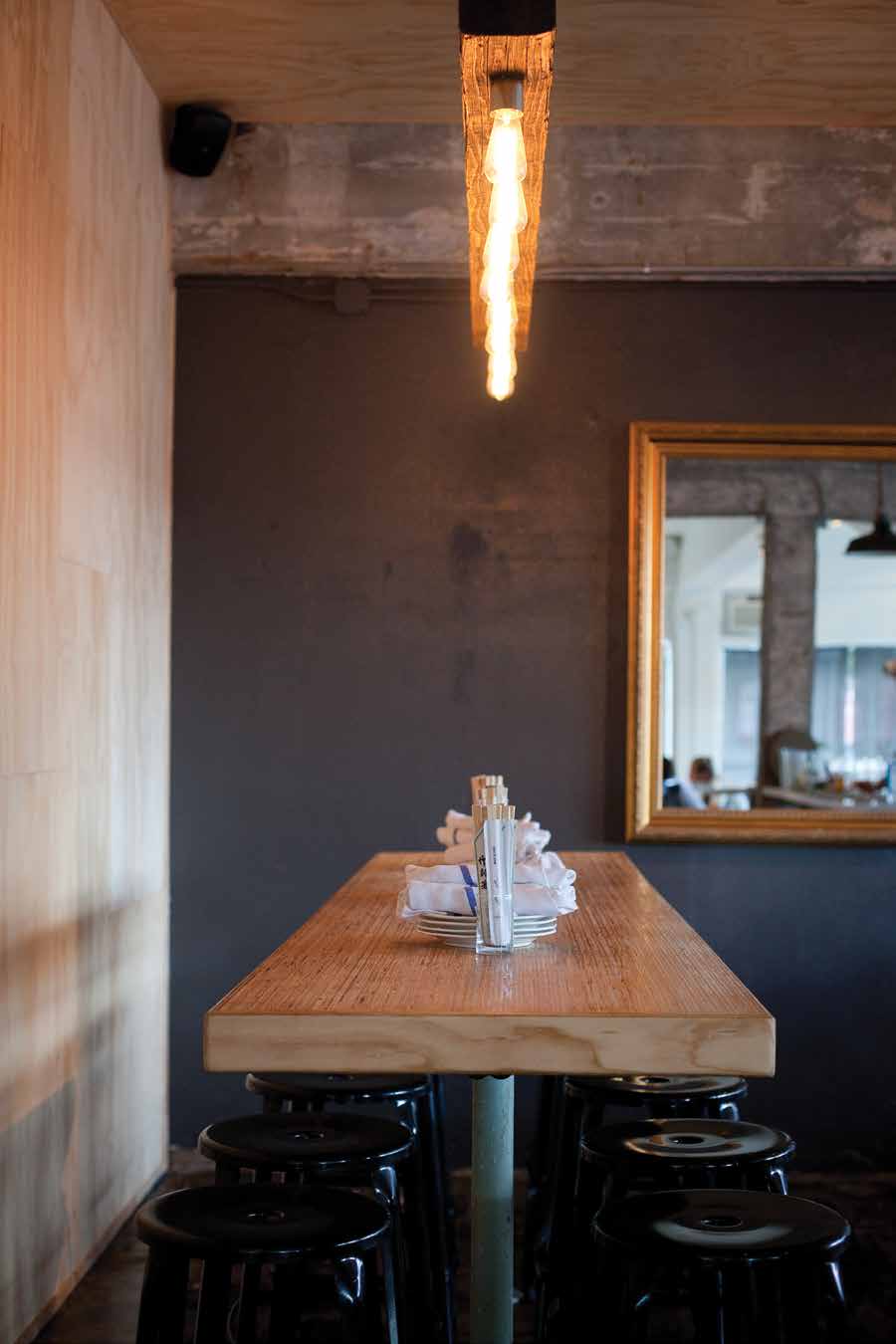