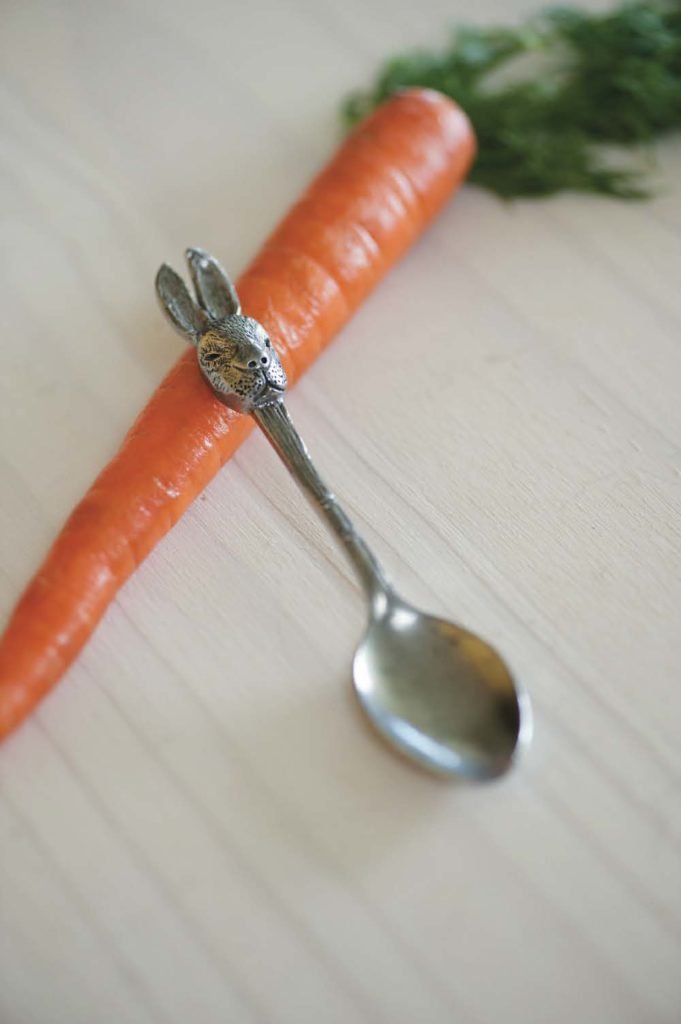 From her open-air, Balinese-style home at Kealakekua Bay, artist Willa Marten spreads some golden-hued Big Island honey onto a slice of toast using a pewter honey “paddle” spoon that she cast herself. Engraved with elegant flourishes and ornamental motifs, her artfully crafted “flat” honey spoon incorporates a hooked design that balances perfectly on the lip of a jar or on the rim of a mug.

Excess honey oozes slowly off the surface of the spoon and down into the honey jar, as Willa observes the proceedings. An aficionado of spoons, Willa fashioned her design after a historic honey spoon she saw in a book about antique utensils. “It’s an old design,” she notes. “The honey paddle is a multi-purpose spoon. You hang it on the rim of a honey jar after you’re done scooping so that the honey drips back into the jar. It’s a serving utensil in the sense that it can be used communally by everybody at the table.” 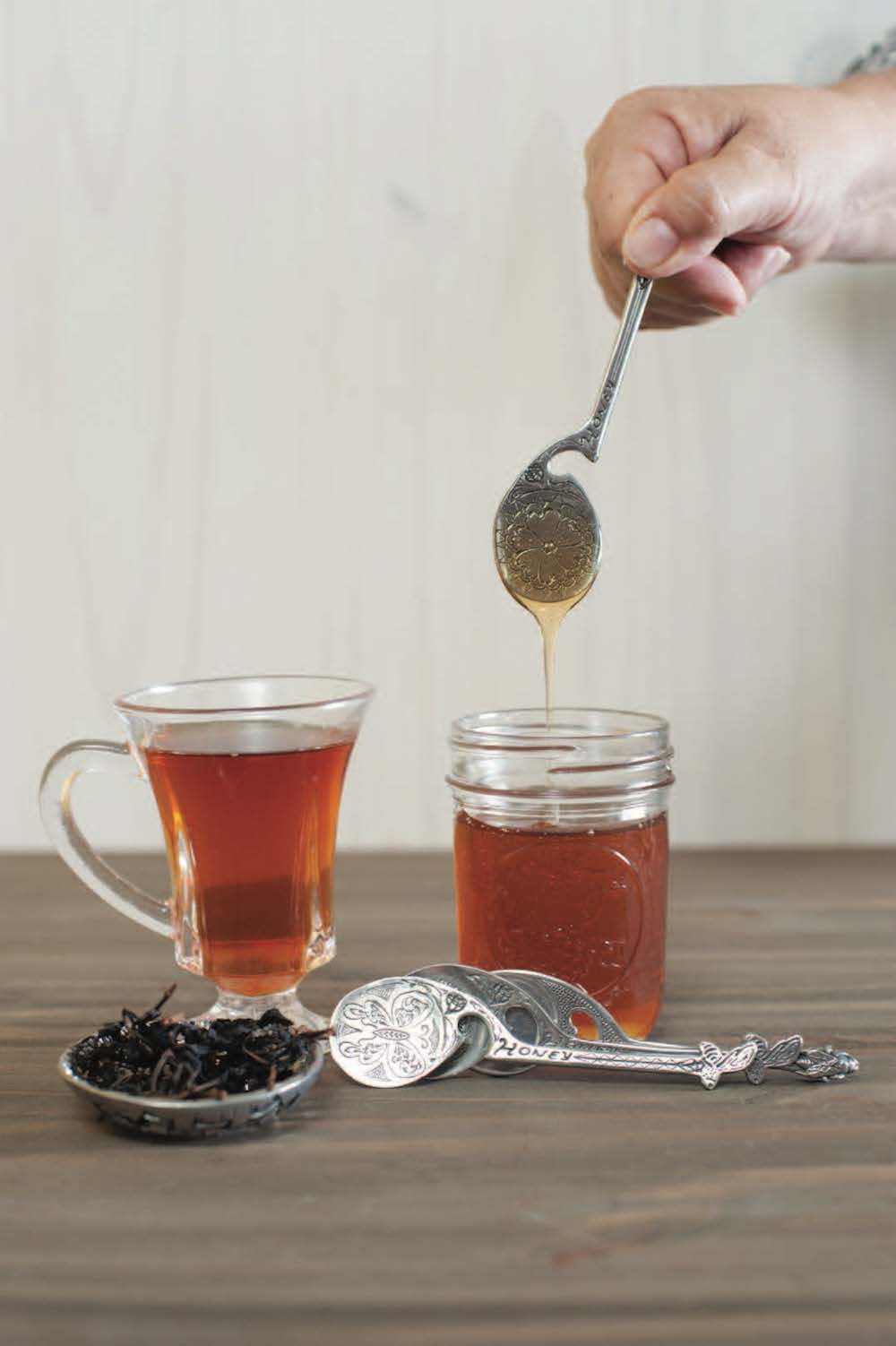 Cast with carved or engraved bees on the ends of each stem, Willa’s honey paddles are just some of the many fascinating replicas of antique spoons she’s made out of pewter through the years. Her larger spoons, based on 17th- and 18th-century designs, feature the traditional “rat tail” back for reinforcement. Her trinity spoon has three small points at the top, a design derived from 1600’s Europe.

Showcased at stores and art galleries (Gallery of Great Things in Waimea, Blue Ginger Gallery in Kainaliu; and the Spoon Shop in Kailua-Kona) — as well as online at PewterSpoons.com and at the South Kona Green Market in Captain Cook — Willa’s spoons and assorted pewter creations have built a following among collectors.

Tracy Ackerman, owner of The Spoon Shop, displays the spoons in a place of honor at the front counter of her gourmet kitchen store in Kailua-Kona.

“Willa’s pewter spoons are so interesting and original,” says Ackerman. “The honey paddles in particular are really different. They are flattened and so unique. People love them. We took them to a meeting of the American Culinary Federation this April at the Waikoloa Beach Marriott, and we sold out of them almost immediately.”

Willa’s connection to spoons runs deeps. Her late husband Buz’s father, Donald Marten, created replicas of historic spoons for the Plimoth Plantation heritage site in Plymouth, Massachusetts in the 1960s. The living-history museum occupies the 17th-century original Plymouth Colony settlement, displaying a trove of artifacts unearthed at the site including some of the oldest European spoons dating from the 10th century brought over by America’s early settlers. 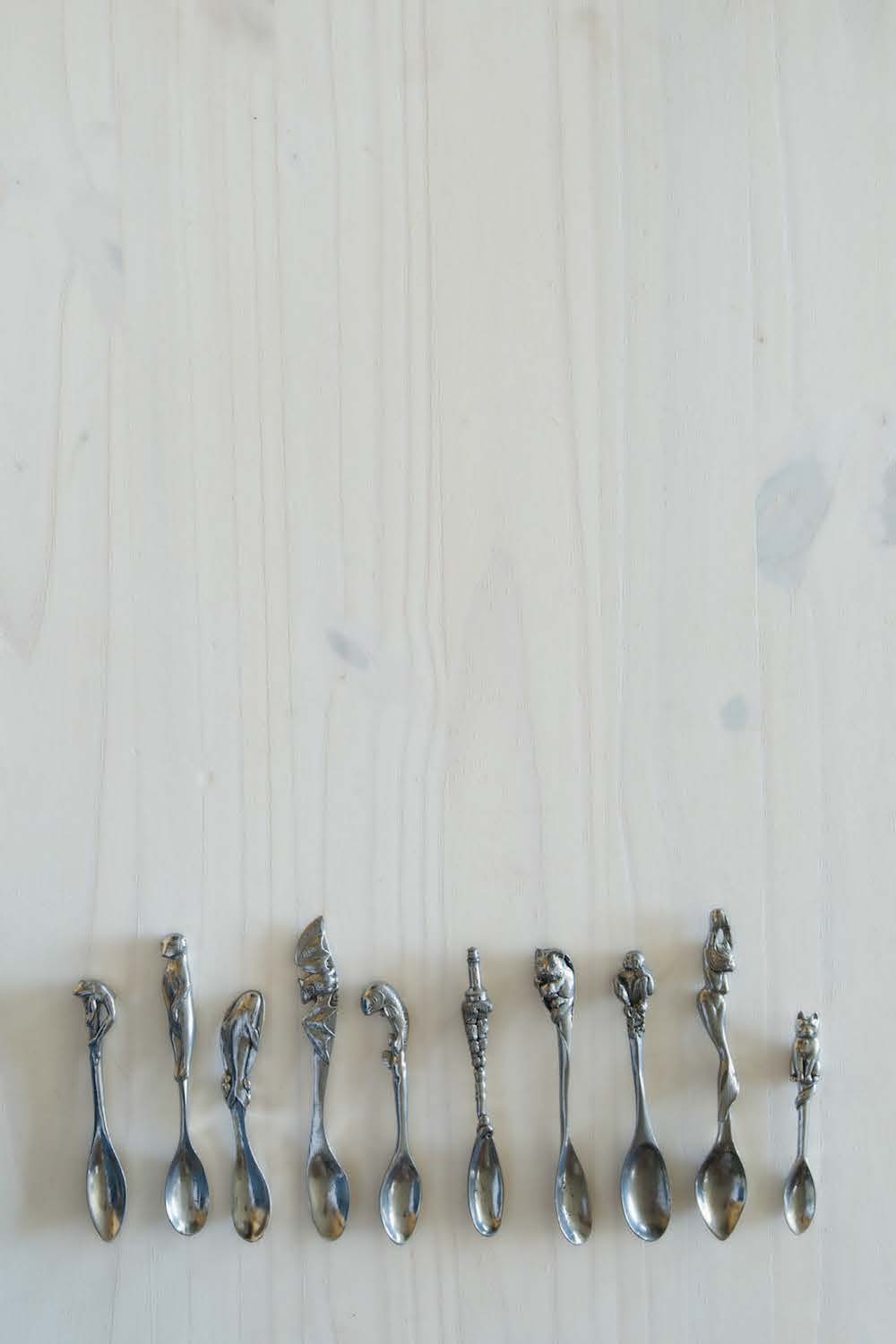 These historic spoon designs had been preserved for posterity in traditional “sand” molds cast by the museum’s director, Jim Deetz, according to Willa. A professor of archeology, Deetz kept in touch with Donald’s son, Buz, who had inherited the pewter equipment from his father.

“That’s how we got into this spoon thing to begin with,” said Willa. “Buz brought the equipment from Massachusetts to Northern California. When Jim Deetz later became the head of anthropology at UC Berkeley, he tracked us down and asked us to make forks and keys for the anthropology museum on campus. In the meantime, I decided I also wanted to design my own antique-style spoons.”

On the cutting edge of the arts scene in Northern California, Willa became involved with the Renaissance Pleasure Faire in the late 1970s. The event’s founder, Phyllis Patterson, heard about Willa’s spoons and forks from Deetz, who was an expert on the era. She asked Willa to make Elizabethan-themed pewter spoons with the Renaissance Faire logo, and soon therefore, Willa’s pewter designs began to take off.

“Everything had to be as authentic as possible,” said Willa. “I started to orient my entire line toward to that period in history, the Elizabethan period. I was with the fair for 30 years, at the various locations throughout California.” 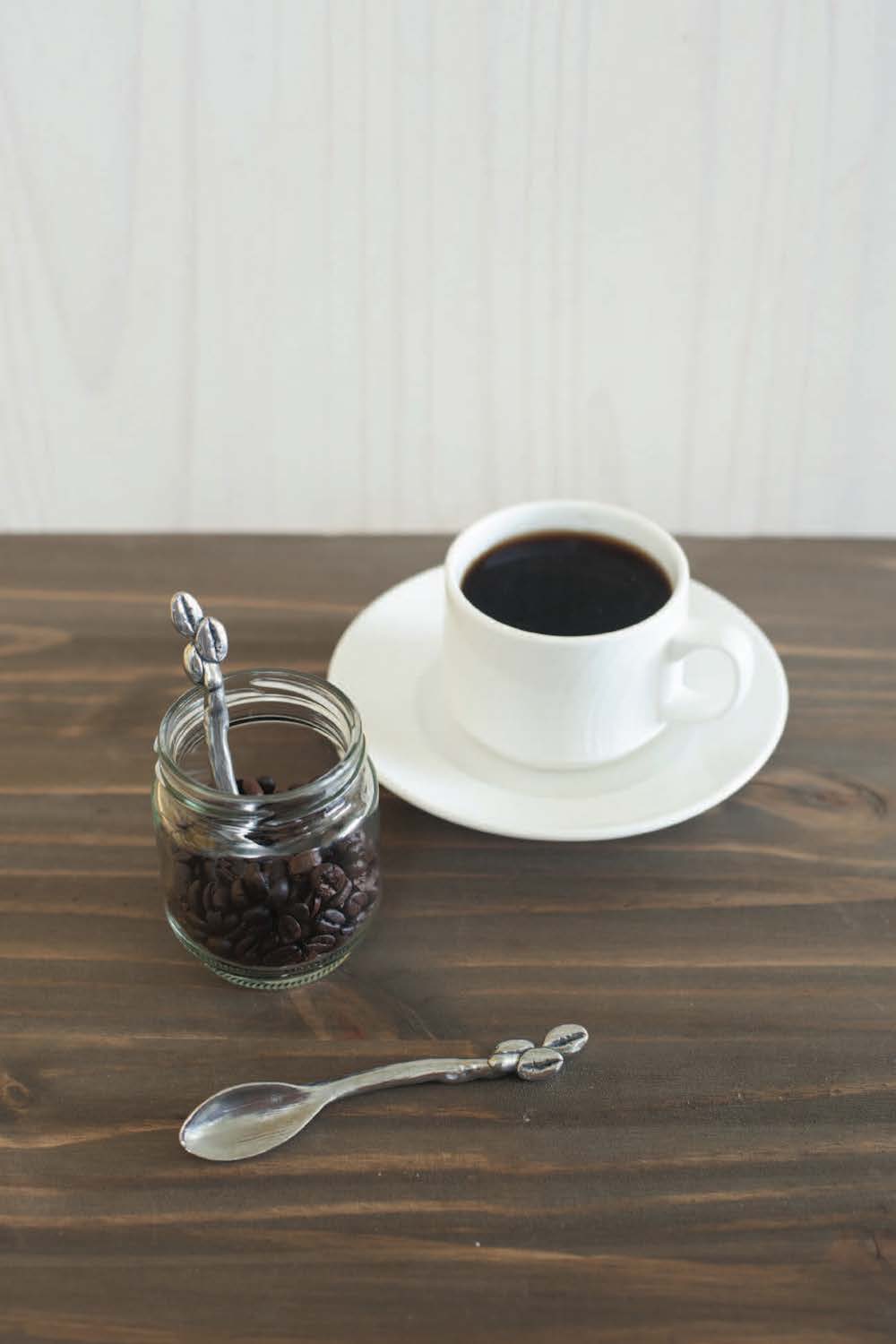 After Buz passed away, Willa met famed netsuke carver, David Carlin. David helped take the spoons to the next level, carving everything from animal heads, insects and mermaids to sculpted ornamentations that become cast in pewter. Willa also did her own carving, engraving, mold making and reproductions. Her “seal top” spoon is an exact replica of a spoon that includes a royal family seal on the end of the stem for making impressions into sealing wax.

Pewter is a tin alloy. Because it’s a soft metal, pewter is cast at low temperatures, around 640 degrees. The process begins with creating a master original out of engraved metal, wood or an actual object. Willa finishes her pewter objects at her home in Hawaii after casting them at her pewterworks facility in California.

“I purchase a lead-free alloy, which is 92-percent tin, 7-percent antimony and one-percent copper,” she says. “I put the vulcanized rubber mold into a spin casting machine and pour the pewter through a funnel as the machine is spinning fast. There is a whole art to cutting the mold, as well as to determining the spin ratio.”

A consummate cook, Willa spends as much time in the kitchen as she does on her art. Open entirely to the elements, her Kealakekua Bay kitchen in South Kona is characterized by a massive lava-rock counter where she prepares everything from organic beet soup to jams, jellies and lilikoi butter. When serving appetizers to her guests, she brings out her tiny salt spoons made of pewter that rest in tiny pewter bowls shaped like seashells.

Willa derives great satisfaction from creating functional items that people can use. Unlike other types of metal work, pewter is non-toxic and relatively easy to work with, yet technique sensitive as an art form.

“I get all ages of people who appreciate the spoons,” she says. “Dolphins and whales are my two new spoon designs. I also have a new design with a coffee bean on the top for the Kona Coffee Cultural Festival. It’s very interesting to be able to make utilitarian pieces out of pewter. It’s fun to experiment and see how things come out.” 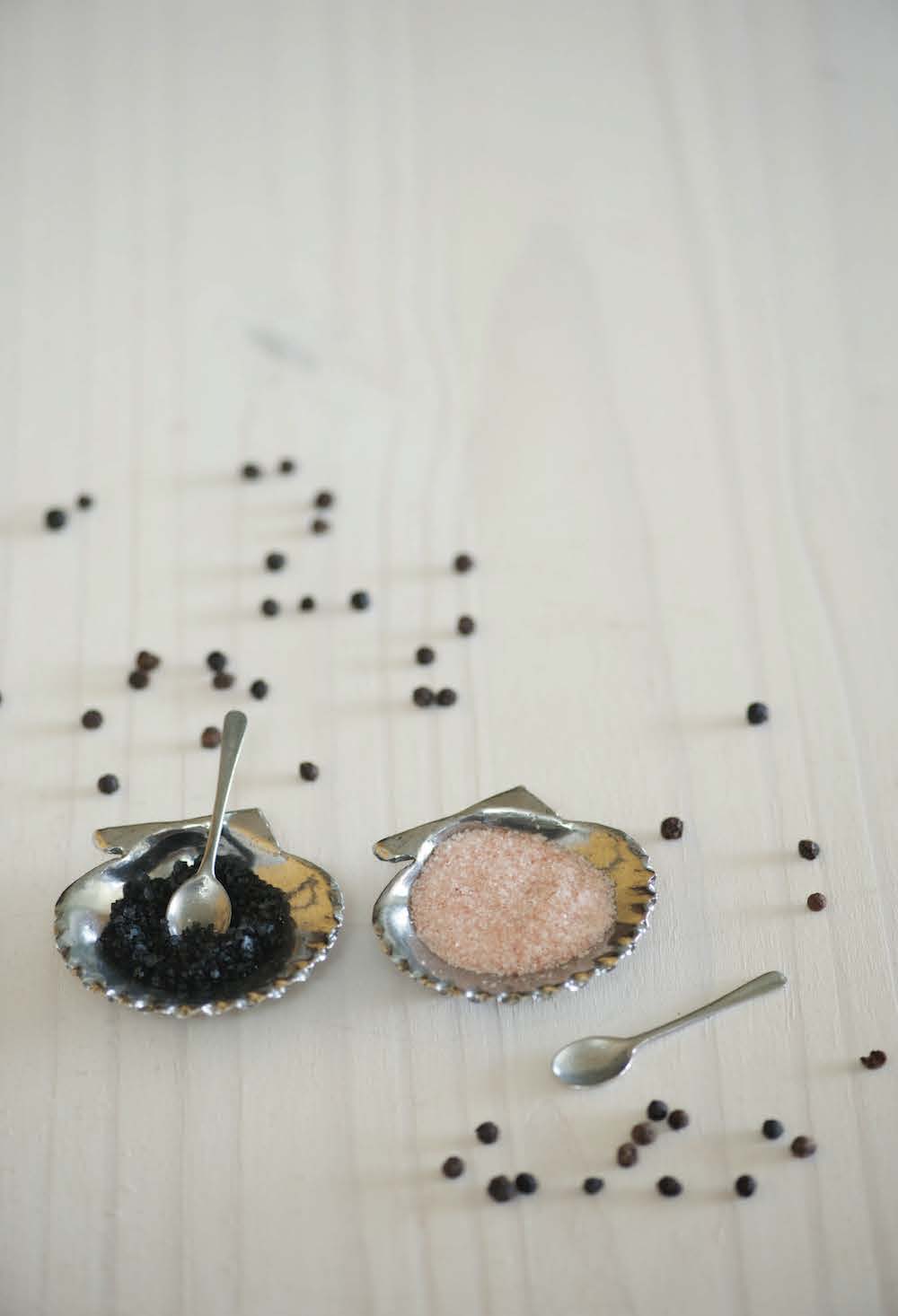