Revolutionaries spring from many wells. Joan of Arc was raised in poverty. Mahatma Gandhi started his career as an attorney; Cesar Chavez, a migrant worker. Perhaps one day it will be recalled that Chef Chris Sayegh, better known in the cannabis community as The Herbal Chef, began his mission by dropping out of a pre-med track at the University of California at Santa Cruz. 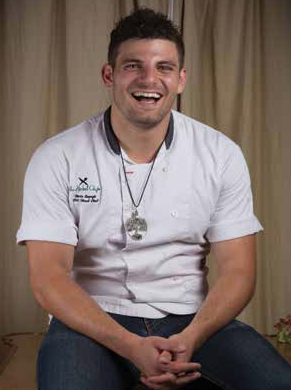 “When I went off to college, I started using cannabis, and I wanted to know more about what I was putting into my body. What I learned is what we’re being told about it is completely false. The reason it became illegal was because of propaganda drummed up by Big Tobacco, Big Oil and the cotton industries.”

One of the first-known plants to be domesticated, hemp has been cultivated by humans for over 12,000 years. It can be used to create plastics, textiles, fuel, building materials and even food, and it utilizes few resources to do so. A quickly growing cash crop at the turn of the century, regulations and restrictions began to appear in 1906, and The Marihuana Tax Act of 1937 was later passed, levying a tax on anyone – from physicians to farmers – who dealt commercially in cannabis, hemp, or marijuana.

“I was studying molecular biology and my interest in cannabis then shifted to the medicinal side,” Sayegh continued. “I began writing all my papers and gearing my focus toward understanding what goes on inside the human body when we ingest cannabis. The first thing I learned is that we have an endocannabinoid system, and it’s the largest system we have. Biologically, we’ve had the nervous system mapped out for ages, the endocrine system has been studied for years, but for some reason, the endocannabinoid system wasn’t even discovered until 1990.”

The system, identified by Israeli researcher Dr. Ralph Mechoulam, consists of a series of receptors configured to bind with both the endocannabinoids naturally produced by the body, as well as plant-based cannabinoids, especially tetrahydrocannabinol (THC) and cannabidiol (CBD), present in cannabis. As anyone who’s ever used the plant might attest, the endocannabinoid system (ECS) plays a part in a host of physiological processes including mood, memory, pain-sensation and appetite. The Herbal Chef WRITTEN BY VANESSA WOLF PHOTOGRAPHY COURTESY OF CHEF CHRIS SAYEGH AND EDIBLE HAWAIIAN ISLANDS.

“This is the energy center of our body,” Sayegh elaborated. “This is the energy source of our major organs. It’s responsible for homeostasis when it’s fueled properly, yet when I began researching this in 2010, my university had 16 papers on it – nothing. And that’s where this idea, The Herbal Chef, began.”

The Herbal Chef encompasses a variety of business endeavors, including frozen, CBD-infused meals for chemotherapy patients and diabetics, ticketed public events, and private fine dining experiences. This year welcomes a book, a TV show and a line of edibles including pancake and waffle mix, mocktails and granola bars. If that’s not enough, Sayegh’s Herb, the first Cannabis restaurant in the world, is slated to open in Los Angeles this August.

“I really want people to pay attention to the ingredients, a lot of times I go fishing, hunting and foraging for them. These are 10 and 15-course meals that span two to three hours.

“But in addition to the culinary experience, I include controlled amounts of turpines, cannabinoids, and THC in order to induce a state of euphoria. In the first two or three courses, that’s maybe 2 or 3 milligrams. This is a gradual come up, so you’re never too overwhelmed at any stage. It’s an experience that’s positive and even euphoric, and you’re kept in a state such that you remember it afterward.”

Until very recently, the concept of cannabis cookery brought to mind pungent desserts produced in smoke-filled rooms or salad bowls teeming with fresh marijuana leaves, a la Cheech and Chong, but Chef Sayegh’s approach – and finished product – are a far cry from pot brownies.

“I rarely use the plant in my food. It’s not a pleasant taste. It’s extremely bitter, actually, and that works with some things, but you will not taste it unless I want you to taste it.”

Similarly, his recipes read like those of any fine chef. A salmon toast preparation is fairly straightforward – well, minus the cattail pollen in the creme fraiche – with THC added just before serving. A traditional tartar features the usual suspects of capers, Worcestershire and egg yolks, yet is infused with cannabis vapor for up to two days.

Sayegh does “very particular” wine pairings, as well. “There’s an average of 10 mg THC throughout the courses, and the tannin of the wines matches with the turpenes in the cannabis in a way that creates this really beautiful ambiance.”

So what about the roles of sativa and indica, typically categorized as the two strains of weed responsible for ‘mental’ or ‘body’ highs, respectively?

“There’s no difference in the strains when you break them down molecularly,” Sayegh explained. “When you break it down into an oil or water-soluble form, the turpene profile is what gives it differentiation. Let’s say that you extracted and got 10% THC, 3% CBD and 1% Myrcene, plus some other cannabinoid, the Myrcene is the dominant turpene there. That tells you what the high will be like. Myrcene is considered to create indica-like effects, so basically a body high. However, if it has Limonene – like what’s found in citrus – it will be a euphoric high.”

Although clearly a chemist, whether or not Sayegh considers himself a revolutionary is unknown. “I do not refer to myself as a cannabis chef,” he noted. “I think it’s ridiculous that’s a differentiation. It’s another ingredient, and you have to be very skilled to use it, but at the end of the day I am a chef.”

“I have to be precise. I’m setting an industry standard. I now have an entire industry that’s looking up to me and asking me what to do next. And it’s important that it’s done right, because it’s about more than the food or even the cannabis. A lot of this has to do with the psyche and truly helping people. It’s all centered around healing.”

Hemp and cannabis = Tomato and tomahto?
Pretty much.

The International Association of Plant Taxonomy has concluded “both hemp varieties and marijuana varieties are of the same genus, Cannabis, and the same species, Cannabis Sativa.”

In other words, the distinction lies in the growth and utilization of the plant, with marijuana focusing on the production of the potent, resinous female glands, known as trichomes. The trichomes contain cannabinoids, most notably THC and CBD. In contrast, hemp is a taller variety with only trace amounts of cannabinoids present.

There are 85 known cannabinoids, chemical compounds which work by imitating endocannabinoids, which are Hawaiian Moons Natural Foods Grocery•Juice Bar•Deli naturally produced by our bodies and work with the endocannabinoid system to regulate the hormonal, physiological and immune systems.

Responsible for most of cannabis’ psychological effects, THC stimulates the brain to release dopamine, creating euphoria, and is responsible for the “high” associated with marijuana use. This is the component that is still largely illegal in the United States.

CBD, in contrast, is not psychoactive and, in fact, blocks the high associated with THC. It has also been shown to combat nausea, seizure activity, and cancer/tumors, as well as anxiety, depression and psychosis. It is legally available in oil distillations. 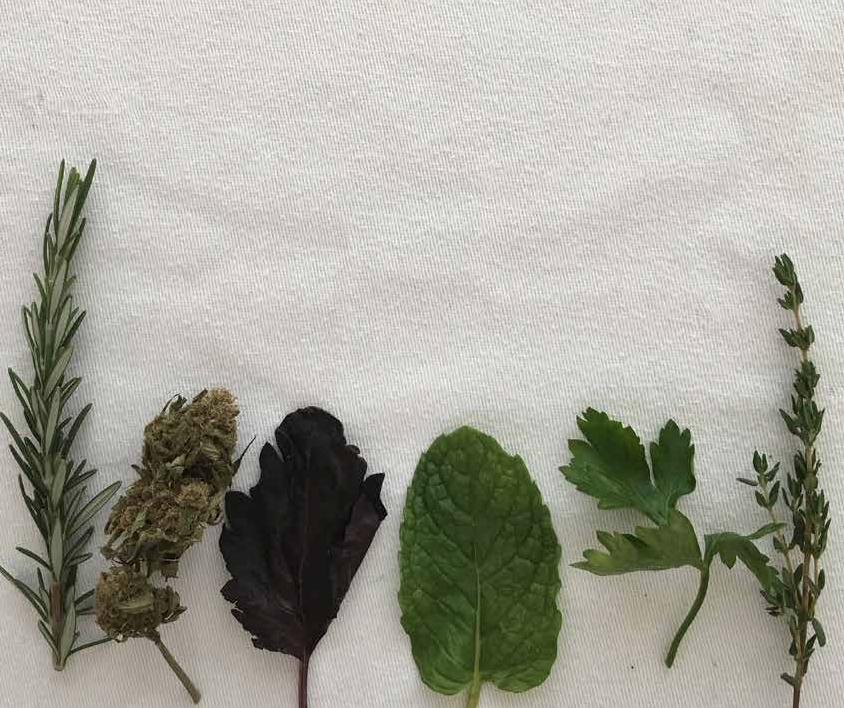