These Guys Are the ‘Reel Deal’

“Good morning, fishroom.” Mike Pascher, head fish cutter for Mama’s Fish House, fields phone calls from fishermen while deftly butchering a glistening, burgundy-fleshed bigeye tuna. “They call me right from their boats,” Mike tells me. “Sometimes I can hear the reel ratchets whirring in the background.”

Mama’s Fish House in Ku`au serves 1,000 customers daily, requiring Mike to purchase some 500 pounds of fish every day—most of it from Maui fishermen. “We wrote checks to 200 fishermen last year. Some came once; some came every week,” he says.

Executive Chef Perry Bateman stops by the fishroom to see how the day’s procurements are going. He tells me there are two types of fishermen: “heavies” and “lights.” “For ‘heavies,’ that’s their entire livelihood,” he says. “They fish every day to provide for their `ohana [family]. ‘Lights’ are weekend fishermen—they crack a beer and relax. If they catch, they catch; if not, no worries. It’s more of a hobby for them.”

Greg Lind from remote Hana town is a “heavy.” Greg and his family follow the traditional Hawaiian lifestyle of fishing, farming and raising cattle. He fishes his homeport of Hana Bay in his 25-foot boat, which he recently renamed Kaihawanawana after his 1-year-old daughter. He mostly fishes alone, although his 4-year-old son, also named Greg, accompanies him on weekends. He makes the 50-plus-mile drive to Ku`au on the infamous Hana Highway several times a week.

This morning, Greg backs his white Chevy flatbed truck up to the dock at Mama’s and offloads yesterday’s catch—mahimahi and ono—into a voluminous dark blue bin that Mike has placed on a rolling cart. Inside the fishroom, Mike, with the help of an assistant, hefts the bin onto a giant scale and weighs each species, noting the poundages in his spiral notebook: 78.4 pounds of mahimahi and 32.2 pounds of ono. He ducks into his cubbyhole of an office in a corner of the fishroom, prints out a check and hands it to a beaming Greg. As far as fishermen go, there’s no “Net 30” at Mama’s.

Quiet and unassuming, Greg tells me he’s learned a valuable lesson over the years: “Don’t call Mama’s until you’re done fishing for the day. Somehow, as soon as I make that call, the fish stop biting.” Greg’s next stop before returning home is to fill up with gas in nearby Pa`ia, where the price is currently $4.55 a gallon. “It’s $5.55 in Hana—I have a 50-gallon tank, so that saves me almost 50 bucks,” he says with a shy smile.

The next fisherman to bring in his catch is Jamie DeBussey, who primarily fishes off Maui’s north shore in his 21-foot vessel Blessed. Jamie moved to Maui from Florida in 1992 to surf. “I was a pro surfer,” he says. “I never dreamed I’d become a commercial fisherman.” But in 1995, he got hooked on windfishing (trolling while windsurfing), saved money from his job at a surf shop and bought his first boat—a 12-footer. A few years later, he built a 16-foot blue boat he never named. “It was such a ‘ghetto boat’ it wasn’t even worth naming,” he says. “People thought I was nuts for fishing 50 miles offshore in that boat all by myself,” he says. “I became known as the crazy guy in the little blue boat.”

A deeply spiritual man, Jamie believes a higher power watches over him every time he goes out fishing. “Deep-sea fishing is one of the deadliest occupations,” he says. Since he fishes alone, Jamie ties himself to his boat with a heavy-duty bungee cord and makes sure he’s always near the engine’s kill switch. A few years ago, he was fishing near Hana when a fierce wind came up and huge waves were breaking all around him. “I was icing my fish when an eight- to 10-footer [wave] hit my boat,” he recalls. “The boat started rolling over, so I quickly moved to high side. I knew at that moment I was in serious trouble—one more wave would roll me completely over. The engine was sputtering, and after what seemed like forever, the bilge pump kicked in. I was bailing like mad with a bucket, too, and it still took over an hour to pump out all the water.”

Today, Mike pays Jamie for 38.4 pounds of mahimahi. “You have to be obsessed to be a commercial fisherman,” Jamie says. “It’s almost like a sickness—like a young kid who wants to surf every day.”

At 35 years old, Layne Nakagawa is one of the youngest commercial fishermen on Maui, and one of only four bottom fishers. He started fishing when he was 4 years old with his father and grandfather. “I was practically raised at the harbor,” he says. His elders were demanding taskmasters, and he learned his craft well: “You can’t screw up on a boat—there’s nowhere to run,” Layne jokes.

Layne began fishing commercially while still in high school. Although he fishes alone on his 31-foot boat, named Naomi K. for his mother, he and other bottom fishers share information on wind patterns, ocean currents and moon phases, to determine where the best fishing is on a given day. “Bottom fishing is a highly skilled occupation,” he says. “You have to throw your anchor accurately within a hundred feet or so, and it’s all about pinpointing the right spot. The fish won’t come if you’re on the wrong side of the spot.”

Layne serves on the advisory board of the Western Pacific Regional Fishery Management Council, which, among other objectives, protects fish stocks and habitats, and collects data to help determine how many fish are in the ocean. In addition to 27 pounds of opakapaka, today Layne has brought in a magnificent 20.8-pound long-tailed red snapper (onaga), caught at a depth of between 700 and 900 feet near the island of Kaho`olawe. Layne estimates the fish was well over 60 years old, and its brilliant scarlet hue is complemented by distinctive caudal fins that end in long, slender points. It’s the most beautiful fish I’ve ever seen.

“Mama’s Fish House gives us an opportunity to contribute to fishery science,” says Layne. Fish cutter Sean Asuncion has extracted the onaga’s reproductive organs so its sex can be determined (this one is a female who has already spawned, according to Layne), and will soon remove the otolith so the fish’s age can be verified. “The otolith is a structure in the inner ear where calcium carbonate is deposited throughout the fish’s life cycle, forming rings—much like tree rings,” Layne says. “By counting the rings, it’s possible to determine the age of the fish.”

After all fish business has been transacted for today, Mike goes back to the computer in his tiny office and updates the restaurant’s menu to reflect what the fishermen have brought in. Greg Lind’s ono will be served in a ti leaf, with coconut rice and papaya salsa; Layne Nakagawa’s onaga will be sautéed with Hamakua mushrooms, garlic butter, white wine and capers.

In May, Mama’s Fish House became the first private business in Hawai`i to fund a fish aggregation device—a deep-sea buoy that attracts pelagic species targeted by commercial, subsistence and recreational fishermen—for the benefit of all Maui fishermen, not just those who fish for Mama’s. “Mama’s asked me to build the buoy myself,” says Layne. “How could I say ‘no’? Mama’s has been supporting my business for 17 years.” Launched 30 miles off the coast near Ha`iku, Layne says the buoy will take the concept of sustainability in a whole new direction.

Chef Perry hopes other businesses will follow suit and fund additional community buoys. “There are plenty of fish out there,” he says. “Even if we had a hundred buoys, we’d never deplete the supply. Let’s all come together as a community to benefit everyone.” 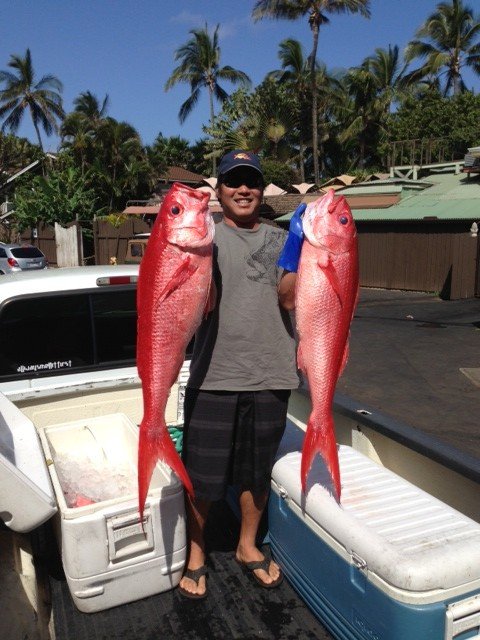