THE PAST
THE HISTORY OF KALO: THE FACTS, FOLKLORE, AND DOWNFALL OF HAWAII’S KALO
WRITTEN BY SARAH SCHULTZ

BEST KNOWN FOR ITS STARRING ROLE in poi, the popular (sometimes polarizing) Hawaiian dish, kalo, was a staple starch in the precontact diet of Hawaiians and has been grown across the archipelago for a millennia. But kalo, also known as taro, is so much more than a complex carbohydrate: Specific varieties were reserved for royalty or ceremoniously offered to the gods, and it‘s integral to the genesis story of the Hawaiian people. To truly understand Hawaiis reverence for this root vegetable, let‘s dig a little deeper, shall we?

TALES AS OLD AS TIME

Radiocarbon data unearthed within the last decade puts Polynesian settlers in Hawaii sometime between 1000–1200 AD. Their voyage spanned across the uncharted waters of the Pacific, aboard archaic canoes. The stars, trade winds, and sea swells were their only maps. Be it by luck, advanced algorithms, or some sort of divine intervention, paradise was found.

With them came the flora and fauna that had sustained their people for generations prior. The roots, cuttings, and seeds were later coined as “canoe crops,” noting their wildly adventurous journey. Archaeological evidence indicates that kalo, banana, breadfruit, coconut, mountain apple, sugarcane, and yam were among these foods. They became the very heart and soul of Hawaiian culture, but kalo is arguably the most sacred, the most storied.

Early texts describe the creation of the islands as a partnership between Wakea (sky father) and Papa (earth mother); who also gave birth to the beautiful goddess Ho‘ohokalani. Through royal ancestral union, or ni‘aupi‘o, Wakea and Ho‘ohokalani conceived a child, a son. He did not survive but was named Hāloa, or long breath. From his resting place rose the first kalo plant. Their second son, born healthy and strong, is said to be the first human Hawaiian. The Hawaiian word for family, ‘ohana stems from the word ‘ohā, the bud of the kalo root. Herein lies the unrivaled kinship that Hawaiians had— and still have—with both kalo and the land.

Not too far a departure from Ireland‘s potato or the mainland‘s corn, kalo’s starchy root was always on the menu, regardless of age or class. (More colorful varieties and tastier pois were grown or reserved specifically for royalty, or ali‘i.) In addition to its energy-sustaining carbohydrate content, kalo is packed with potassium, fiber, calcium, and iron. When properly cooked, every part of the plant can be eaten.

The cooked root, or corm, was commonly hand-pounded into a pulp, or pa ‘i‘ ai. The pulp was saturated with water and the fibers were strained, then the mixture was eaten fresh or left to ferment for days. Voila—the purple-gray paste known and loved as poi.

PLANT KALO STALKS WHEN IT RAINS

Before the modern marvel that is refrigeration, a nutrient-dense food with an extended shelf life was something of a godsend. The pudding-like consistency and wealth of health benefits made it especially important for infants and the elderly. Early Hawaiians did not traditionally use utensils; poi was characterized as one-, two-, or three-finger, denoting how many you needed to scoop up a mouthful, and they could allegedly eat up to 15 pounds of poi daily.

Beyond its place at the table, kalo was used in medicine and ritual. The stalk could zap the sting from insect bites and reduce fever, while thick (think one-finger) poi was applied as a topical remedy. Rain water caught in the leaves of the ‘apuwai variety was considered sacred and aided in spiritual healing.

It can be reasoned that for a population of about 400,000 ancient Hawaiians, tens of thousands of acres were utilized to sustain kalo as a principle food source. The early settlers would have likely confined production to the wet, windward sides of the islands,but as the population spread out, they adapted to new natural resources and growing conditions.

Wetland kalo was first planted near river mouths and marshes, then eventually in flooded fields known as lo‘i. This ingenious irrigation system followed the land‘s natural contours and the laws of gravity; fresh water was diverted down man-made canals that were reinforced by rocks to the uppermost lo‘i. The water flowed down from patch to patch, finally returning to the stream. The construction and cultivation of kalo lo‘i was back-breaking, muddy work, but it did yield a higher-caliber poi than its upland cousins.

While not all corms are created equal, farming in non-irrigated upland areas was just as important as lo‘i cultivation. Upland, or dryland, kalo thrived in regions with rich, mulched soils and reliable rainfall. These tougher corms could take up to a year to mature and became ‘table kalo,‘ cut and cooked into pieces like a potato.

For centuries, these sustainable traditions were upheld under the code of mālama ʻāina, or caring for the land. Kalo was the connection to everything—earth, ‘ohana, and the divine13—but it was with the fateful arrival of European settlers that this deep-rooted bond began to loosen. 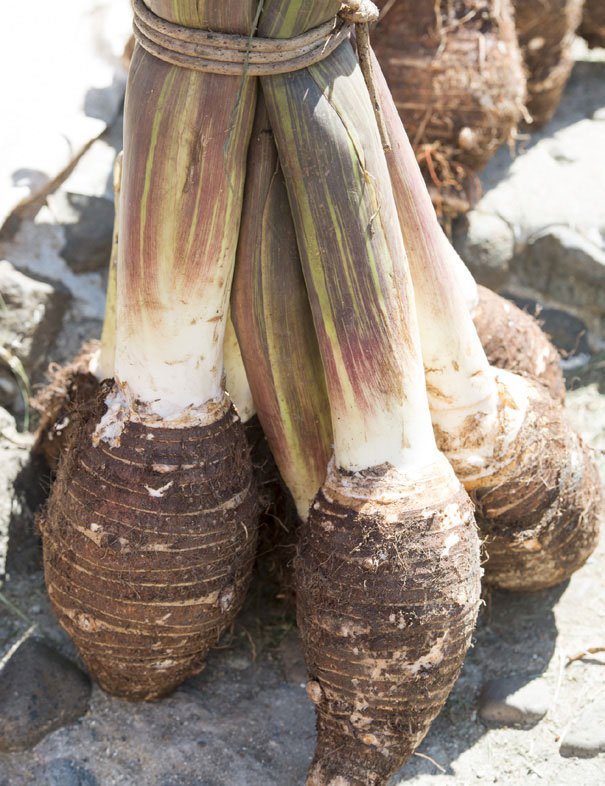 As with the totality of Hawaiian culture, kalo‘s lineage can be traced closely against immigration patterns. Polynesian settlers brought Hawaiian kalo to life; with the arrival of Europeans in the late 1700s, it went through its first major decline. Europeans lacked both a palate for poi and a regard for kalo‘s sacredness. The island‘s population and plant life were struck with new diseases brought from the west, reducing the supply and demand for kalo.

An influx of Asian migrants in the mid 1800s soon took the reins on kalo farming and poi production. The ancient lo‘i systems began to mirror the design of rice paddies, and at the very start of the 1900s, Chinese farmers were growing 50% of the total kalo crop and mass-producing 80% of all poi. With this, the art of lo‘i and handcrafted poi was pushed even further out of sight. As demand for kalo continued to dwindle, many of those paddies made the final switch to rice production. An estimated 1,280 acres were being used for kalo production in 1900; rice occupied almost eight times that acreage by 1907.

In the 1930s, the University of Hawai‘i‘s College of Tropical Agriculture and Human Resources undertook a massive research project to collect, identify, and give safe haven to heirloom Hawaiian kalo varieties before they became merely a part of the past. It‘s believed that there were once 150-175 unique kalo plants in Hawaii, of which 84 were found and preserved during this effort. In the past three decades, a handful of those have been lost at the hands of natural disasters and budget cuts.

Proverbs are quite simple by nature, but sage in wisdom. Still waters run deep. Every cloud has a silver lining. E kanu i ka huli oi ha‘ule ka ua, meaning, ‘plant kalo stalks when it rains‘, is an old Hawaiian adage that says do the work when you‘re afforded an opportunity. Today, we‘re at yet another crossroads in kalo‘s history. This plant is woven into the fabric of Hawaiian culture, the thread that binds people to their land and ancestral roots. The opportunity to preserve the past, navigate the present, and fight for kalo‘s future is here. Let‘s get to work. [ eHI ]