DRIED CORIANDER SEEDS are used to flavor specific dishes such as curries. The seeds are derived from the cilantro plant after going to flower then seed. Cilantro seeds when toasted, taste warm, aromatic, some-what sweet with a floral aroma and are known as the spice of coriander.

Green coriander seed-pods are a rare find at a farmers’ market. The fresh coriander seed-pods are best when eaten raw. Add them to salads or sprinkle them into a stir-fried dish. They can be used to create unique cocktail profiles by infusing them in simple syrup or a neutral spirit like vodka. You can also brine them similar to capers. The taste is citrus-like, minty and a little floral.

We encourage you to plant and grow your own.

Vetiver grass, or Chrysopogon zizanioides, is a perennial bunchgrass of the family Poaceae, native to India. Vetiver is most closely related to Sorghum but shares many structural characteristics with other fragrant grasses, such as lemongrass, citronella, and palmarosa. Vetiver was brought to Hawaii by the USDA for two main reasons: to help with soil erosion and to absorb toxins from the soil.

The grass grows rapidly with a very strong root system. Although technically invasive, it is considered tolerable because of its uses and can be eradicated easily once the roots are removed and destroyed. Livestock have also been known to eat the grass.

The roots have two medicinal qualities. Once harvested and cleaned, an oil can be extracted from them; you can rub vetiver oil on the bottom of your feet to encourage relaxation and promote a great night’s sleep. Because of its grounding effects, vetiver oil is commonly used in massages. It can also be made into a tea, which, when drunk, will induce a similar tranquil effect.

This plant belongs to the family Anacardiadeae, which includes the terebinth and the pistachio. Though sumacs are generally encountered as shrubs or small trees, they can grow up to 40 ft tall. Sumacs propagate both by seed (spread by birds and other animals), and by new shoots from rhizomes, forming large clonal colonies. The leaves are spirally arranged; though some species have trifoliate or simple leaves. The leaves contain a high proportion of tannin which is used in the manufacture of leather, giving rise to its Hebrew name, og ha-bursaka’im (“tanner’s sumac”).

The flowers appear in dense spikes 11” long. These greenish, creamy white or red flowers are very small and each has five petals. The female trees bear reddish fruits (in Syriac sumac means “red”) arranged in dense clusters called “drupes” or “sumac bobs”. The fruits are shaped like lentils, and are hairy with an acrid taste. The dried drupes of some species are ground to produce a tangy, crimson spice.

Sumac was used in drinks in the colonial United States, giving rise to the tradition of “pink lemonade”. The fruit (Rhus typhina, staghorn sumac) can be soaked in cold water to make a refreshing, vitamin C-rich beverage. Ground sumac powder can be used as a spice to add a tart, lemony taste to salads or meat. In Arab cuisine, it is used as a garnish on dishes such as hummus and tashi, and is added to salads in the Levant. It is also one of the main ingredients in Palestine’s national dish, musakhan.

In Afghan, Armenian, Bangladeshi, Indian, Iranian, Mizrahi, and Pakistani cuisines, sumac is added to rice or kebab. In Azerbaijani, Central Asian, Jordanian and Turkish cuisines, it is added to salads, kebab and lahmajoun. The variety Rhus coriaria is used in the spice mixture za’atar. 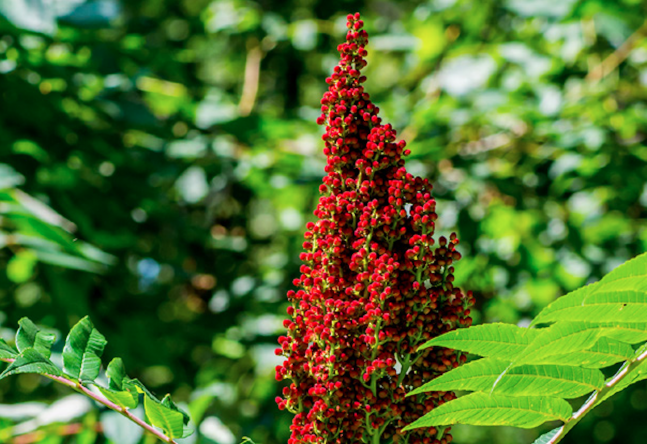 Hibiscus is a genus of fl owering plants in the mallow family, Malvaceae. When in full bloom the hibiscus flower is large in size, containing several hundred species that are native to warm-temperate and tropical regions. The flower includes both annual and perennial plants, as well as woody shrubs and bushes.

The tea made of hibiscus fl owers is served both hot and cold and is well known for its color, tanginess and flavor. In Hawai‘i, tea can be prepared by first steeping the petals in hot water and then adding lemon or lime juice (which turns the beverage from dark brown/red to a bright red).

Dried hibiscus is edible, and is often a delicacy. You can now fi nd hibiscus fl owers dried, candied and made into a syrup. You can also find the flowers used as a decoration to food, tablescapes and worn as an adornment.

Acmella oleracea (syn. Spilanthes oleracea, S. acmella) is a species of flowering herb in the family Asteraceae. Also known as the toothache plant. Its native distribution is unknown, but it is likely derived from Brazil and widely grown in tropical climates, such as Hawaii. It is grown as an ornamental and it is used as a medicinal remedy in various parts of the world. A small, erect plant, it grows quickly and bears gold and red inflorescences.

For culinary purposes, small amounts of shredded fresh leaves are said to add a unique flavor to salads. Cooked leaves lose their strong flavor and may be used as leafy greens. Both fresh and cooked leaves are used in dishes. They are combined with chilis and garlic to add flavor and vitamins to other foods.

The flower bud has a grassy taste followed by a strong tingling or numbing sensation and often excessive salivation, with a cooling sensation in the throat. The buds are known as “buzz buttons”, “Szechuan buttons”, and “electric buttons”.

Jaboticaba (myrciaria cauliflora)—Although native to Brazil, these fruit trees are found in many backyards in Hawai‘i. The tree is a slow-growing evergreen. It has salmon-colored leaves when young, which turn green as they mature. The tree prefers moist, rich, lightly acidic soil. Its flowers are white and grow directly from its trunk. Jaboticaba may flower and fruit only once or twice a year, but when continuously irrigated it flowers frequently, providing fresh fruit year round in tropical regions.

The fruit is a thick-skinned berry and typically measures three to four centimeters in diameter. Resembling a slip-skin grape, it has sweet, white or rosy pink gelatinous flesh encased in a thick, purple, astringent skin. Embedded within the flesh are one to four large seeds.

Jaboticaba fruit is largely eaten fresh; its popularity has been likened to that of grapes in the United States. The fruit begins to ferment three to four days after harvest, so it is often used to make jams, tarts, strong wines and liqueurs. Due to its extremely short shelf life, fresh Jaboticaba fruit is very rare in markets. 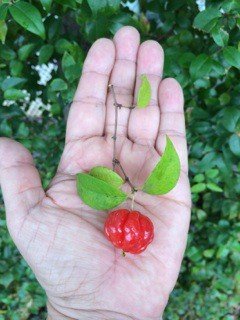 The shrub or tree grows to 25‘ high, has slender, spreading branches and aromatic foliage. The 7- to 8-ribbed fruit is 3/4 to 1 1/2 “ wide, turns from green to orange as it develops and, when mature, bright-red to deep-scarlet or dark, purplish maroon when fully ripe. The skin is thin, the flesh orange-red and very juicy; acid to sweet, with a touch of resin and slight bitterness. There may be 1 fairly large, round seed or 2 or 3 smaller seeds.

The Surinam cherry grows in almost any type of soil–sand, stiff clay, soft limestone–and can even stand waterlogging for a time, but it is intolerant of salt.

The ripe fruits is eaten out-of-hand. Cut a slit vertically on one side, spread open to release the seed(s), and kept chilled for 2 or 3 hours to dispel most of their resinously aromatic character. If seeded and sprinkled with sugar before placing in the refrigerator, they will become mild and sweet and will exude much juice. They are often made into juice, jelly, relish or pickles. Brazilians ferment the juice into vinegar or wine.

The seeds are extremely resinous and should not be eaten. The leaves have been spread over the floors of homes and when walked upon, they release their pungent oil which repels flies.