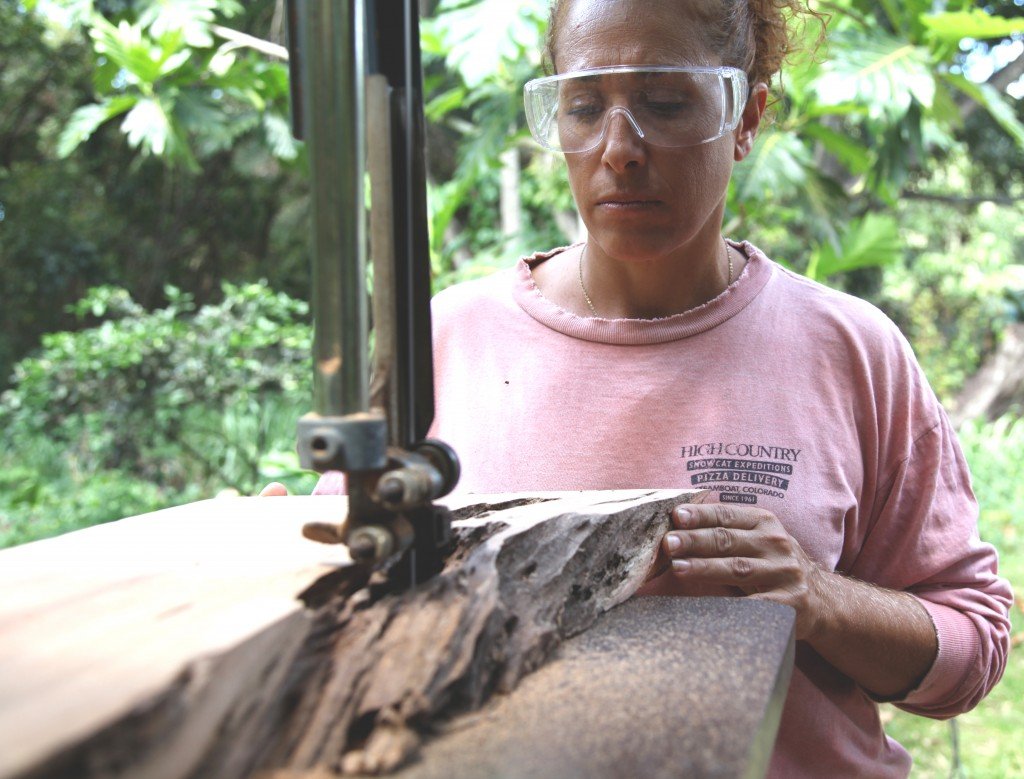 There isn’t a part of Jennifer Homcy’s home in Hale‘iwa that doesn’t have to do with her woodworking business.

There’s almost always a stack of logs in her front yard, dropped off by people who have heard she creates one-of-a-kind cutting boards, serving trays and frames out of salvaged wood.

Her backyard is her workshop, where the cutting, shaping and sanding is done under ‘ulu (breadfruit) and mango trees. One of the sheds is filled with rough-edged, mismatched pieces of monkeypod, shower tree and mango, their fate not yet determined. Band Saw, a charcoal-gray stray cat who got his name because the vet bill when Homcy found him totaled the cost of the new band saw she had been saving for, is often perched on the railing, overseeing the work out back.

And inside this 1930s home, which Homcy converted into the ultimate beach escape, is where her pieces of functional art soak in mineral oil and dry, then are stored in racks and on the dining room table she bought at the swap meet 13 years ago.

These are the headquarters of Foundwood, a woodworking company that uses only reclaimed wood to create heirloom pieces for the kitchen and home. It’s been a longtime hobby of Homcy’s that turned into a full-time business last year (2013), one that has allowed her to reconnect with her father, Dave, who died in 2003. 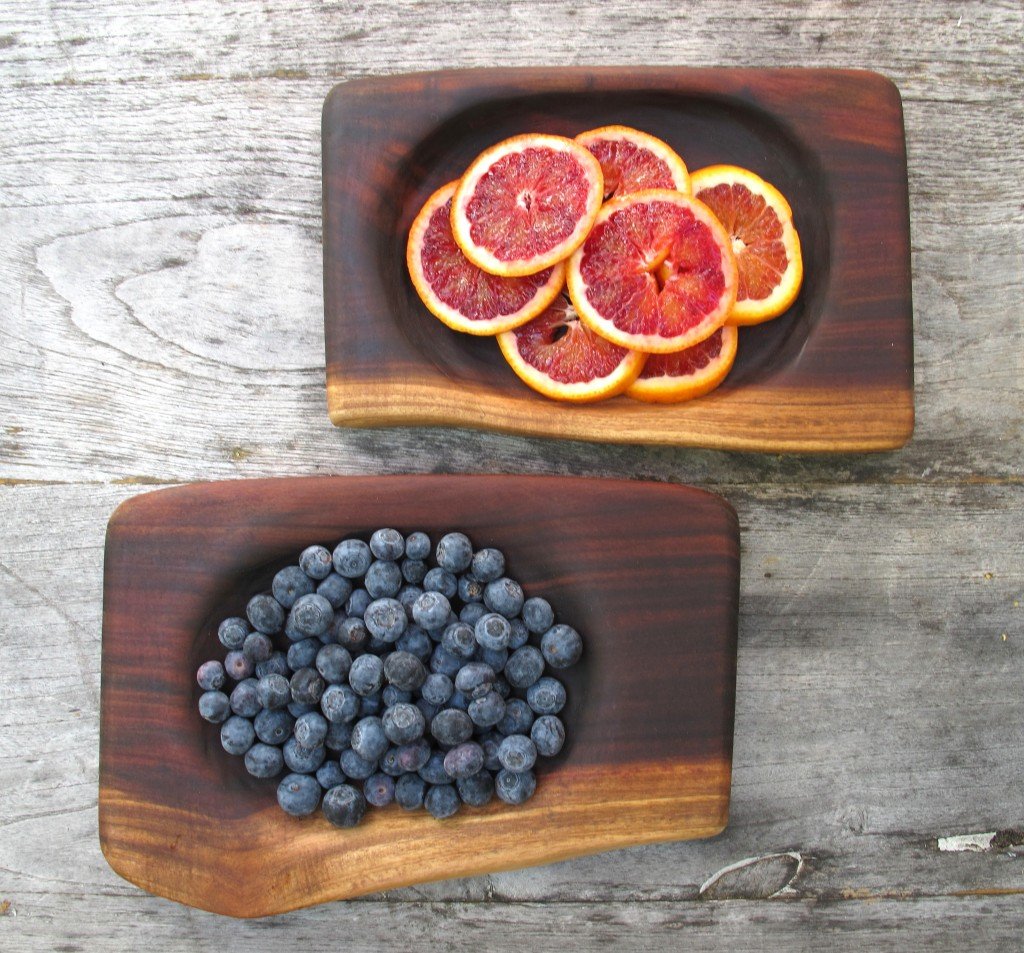 The senior Homcy started Foundwood in Florida nearly four decades ago. It was his hobby, too, collecting driftwood that washed up on Juno and Jupiter beaches. He turned these salvaged wood pieces into beautiful cutting boards and sold them at art festivals.

“And now 35 years later,”says Homcy, tanned and relaxed in a tank top and yoga pants, “I’m going back to my roots.”

A scientist by trade, Homcy grew up on the beaches of Florida, collecting driftwood and shells. She wasn’t planning on being an artist; in fact, as far back as she can remember, she has always had a love for animals, which ultimately turned into a career in marine biology.

“I rescued a bug out of my grandma’s pool when I was two,”she says, laughing.

At age 5, she volunteered at a wildlife sanctuary. As a teenager she was actively involved in marine conversation programs. And at the University of Southern Florida, she majored in biology and environmental science. She spent more than a decade working in the field.

But at the same time, she was always tinkering with wood, creating unique frames out of salvaged wood just as a hobby.

When her brother, the famed surf cinematographer and photographer Dave Homcy, moved to O‘ahu’s North Shore in 1995, Homcy started visiting the Islands more often. And in 2001, she made the move official, first taking a job with the National Oceanic and Atmospheric Administration, then as a boat captain for whale-watching and snorkeling tours. And for a few years, she worked as a science teacher at Kapolei Middle School. But her side business making frames and cutting boards started to take off, and she decided to pursue Foundwood full-time last year.

“It had started to grow beyond my capacity doing this part-time,”Homcy says. “It just grew organically.”

Homcy started making cutting boards about three and a half years ago. The first time she made a few, she took them to the Hale‘iwa Farmers’Market and sold all six before the market even opened. The next time, she brought 15 — and those sold by 10 a.m.

“I started to realize by that point there was something going on here,”she says.

Now, her one-of-a-kind cutting boards — all made from untreated reclaimed wood, mostly from trees that have been removed for development and salvaged from the chippers of tree trimmers — are her best-sellers, particularly the heart-shaped boards that start at $30. In fact, she’s so busy churning out these boards — with two full-time helpers, she can turn around 80 pieces a week — she barely has enough time to take on custom orders.

“There’s been a reinvigoration of food,”she says, attributing her boards’popularity with the coincidental rise in food and environmental consciousness. “And now it’s become an art.”

While the wood types vary on availability, she has used monkey pod, kamani and milo, Cuban mahogany, mango, eucalyptus, sometimes lychee or Malaysian tamarind trees for her various wood projects. And regardless of the wood, Homcy always works with the shapes and grains of each slab to create functional pieces that are venerable works of art.

That’s what William Chen, former chef de cuisine of the Beachhouse at the Moana Surfrider in Waikīkī, loved about her work. The restaurant purchased more than 30 different serving trays and small plates made from koa and monkeypod.

“The nice thing about it,”he says, “is that they’re all unique and all made from salvaged wood. Every piece has character. They’re just beautifully made but industrial, too. You can put them in the dishwasher.”

That’s the goal: to create unique pieces that are both beautiful and functional, that can hang on your wall as art but then be taken down to use as a cutting board or serving tray. That means all of her kitchen pieces — each a different shape, size and color —are soaked for a few days in mineral oil that’s non-toxic, odorless and food-safe.

It’s about repurposing the wood in a way that makes sense.

“Everybody needs a cutting board,”she says, grinning. “Even if you don’t cook, you still gotta cut a lime for your cocktail.”