When food is served family-style, you can tell who grew up with a passel of siblings: they’re the ones hawk-eyeing the dish as it’s passed from person to person. They calculate how many spoonfuls remain while ladling heaping portions into their neighbors’ bowls. Around the dinner table, I notice two opposite reactions in myself and those beside me. First, a mixture of impatience and anxiety. What if there is not enough? Because we’re adults and mostly mature, we’ve learned to quell the inner child that might tantrum if we don’t get as much as the others did. I have never gone hungry; I have no reason to worry that the bowl will be scraped clean before it reaches me. But just as often, I worry about those after me. Will they get enough?

Which gives rise to the second reaction: selflessness. Almost invariably, dinner guests take smallish portions, and leave something in the bowl. No one wants to be the one who empties the dish. And somehow, despite (or maybe because of) this self-deprivation, everyone leaves full. It reminds me of the parable when Jesus fed 5,000 people with just a few fish and loaves of bread. The more people shared, the more there was to share.

Last spring, Kāne‘ohe taro farmer Daniel Anthony asked Edible Hawaiian Islands to help fund the documentary, “I am Haloa.” The film, which is in post-production, follows three Kamehameha School seniors as they cultivate, harvest and eat taro three meals a day for 90 days. As the young women travel across the archipelago working with farmers and chefs, they root themselves in their native culture. For Hawaiians, taro is not only a dietary staple, it’s their eldest brother.

Our publisher Dania Katz knew immediately that she wanted to support the students’ effort. But rather than writing a check, she sponsored a benefit in the spirit of the film: a taro-themed supper. “I decided to feed the community,” says Katz, “to share how eating together can uplift a neighborhood or support a need in the community.”

When Travaasa Hana jumped in to co-sponsor the event, agreeing to host chefs, organizers and media at the five-star resort, everything fell into place. The dinner’s setting couldn’t have been more apropos: on the eve of the 22nd annual East Maui Taro Festival, at the resplendent Kahanu Garden. Just outside of tiny Hana town, the garden is home to the state’s largest living breadfruit collection, as well as a Polynesian canoe garden and Pi‘ilanihale Heiau, one of the most significant ancient temples in all of Hawai‘i.

Guests arrived in the late afternoon as the sun gilded the forested hillside. A huge rainstorm had swept the air clean the day before and the rolling lawn was extra green. 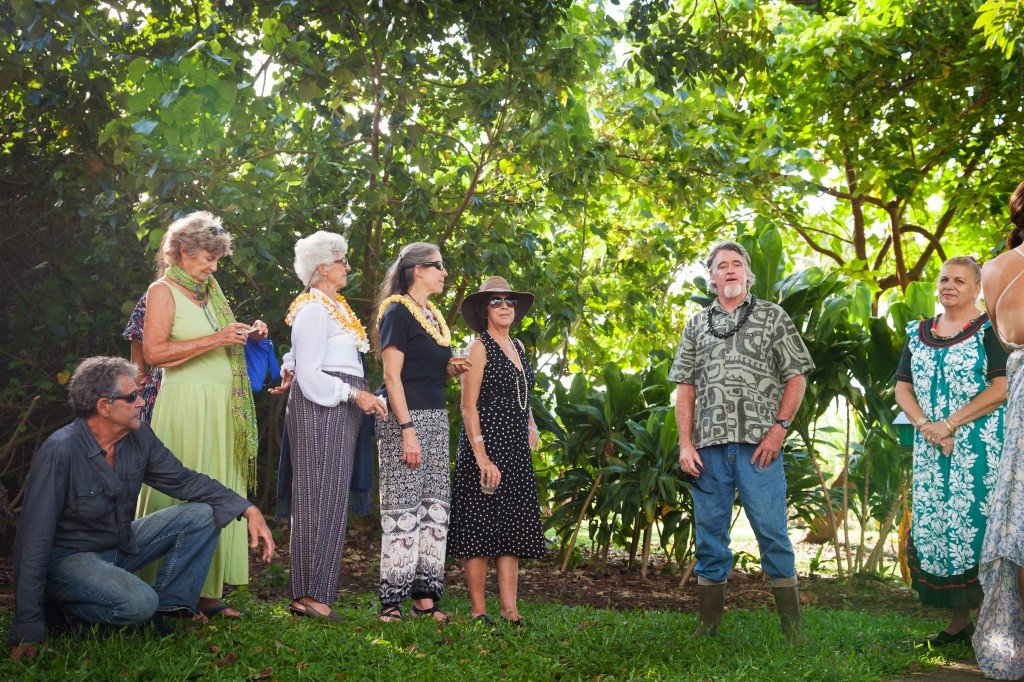 Before we sat down, we toured the grounds. Quite by chance, Native Hawaiian cultural advisor and artist Sam Ka‘ai was in attendance and gave an impromptu talk in the canoe garden. He described how his ancestors migrated across the Pacific using the stars as guides and carrying in their voyaging canoes everything necessary for survival: breadfruit, bananas, sweet potato and taro.

Looming behind him, Pi‘ilanihale Heiau stood as testament to a powerful people. Ka‘ai further explained that the Hawaiian word for land, ‘āina, doesn’t just mean acreage, but the fertile soil that produces ‘ai, food. And with that in mind, the procession returned to the mobile kitchen where the chefs had prepared a feast.

Sitting on the grass and dressed in a malo (loincloth), Daniel Anthony pounded chunks of steamed taro with a stone pestle. Every so often, he’d scoop a few doughy clumps onto fresh leaves and his young helpers would scamper off to distribute them in the crowd. In my mind, there is no better food than this. Pa‘i ‘ai has a consistency similar to Japanese mochi: chewy, starchy and satisfying. It’s packed with vitamins and minerals (more calcium and iron than rice or potatoes) and is fit for travel and long-term storage. It’s what nourished the first Hawaiians on their trans-Pacific voyages. When mixed with about three times more water, pa‘i ‘ai becomes poi. But unlike poi, this labor-intensive treat can’t be machine-made. It has to be hand-pounded.

To eat pa‘i ‘ai is to savor a labor of love. Before you can make this Hawaiian specialty, you must first build a kalo lo‘i (taro patch) with sturdy rock walls and fresh stream water flowing through. Then you plant rows of huli (taro starts) in the soft mud. As the shoots grow, you have to protect them from pests: diseases, snails, grazing animals. Nine months later, you can wade into your patch of heart-shaped leaves to yank the fist-sized roots free from the mud. You wash and steam them, and then the fun begins: pounding.

If Anthony is any indication, we should all be eating more taro. His enthusiasm and energy seemed boundless as he methodically mashed the roots he grew into delicious appetizers. His farm, Mana ‘ai, is one of the few in the state that consistently produces pa‘i ‘ai. His family helped legalize the commercial production of this traditional food.

Anthony serves as a mentor to the student filmmakers producing “I am Haloa.” In addition, the young women have apprenticed under top Hawaii chefs to create novel recipes that spotlight taro. Lee Anne Wong of Koko Head Café is the film’s culinary advisor. She flew over from O‘ahu to cook for the benefit dinner, alongside culinary whizzes Isaac Bancaco, James Simpliciano, John Cadman and Derek Watanabe. 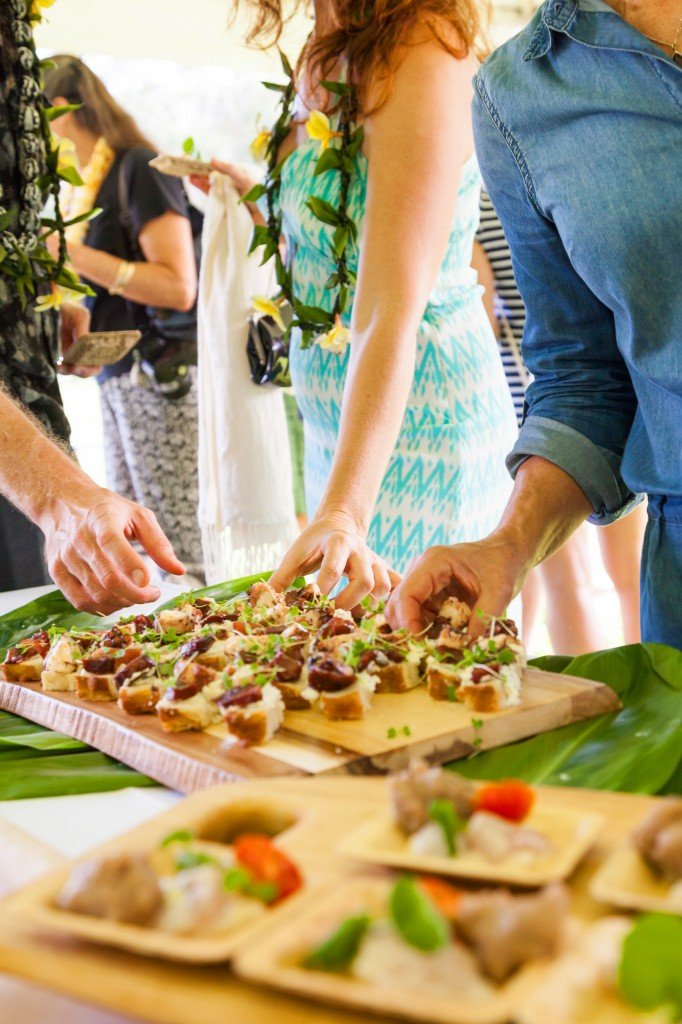 Bancaco is a Maui chef currently on a meteoric rise in the culinary universe. He served bite-sized versions of popular dishes from his restaurant, Ka‘ana Kitchen at Andaz Maui: octopus, smoked meat and Surfing Goat Dairy cheese atop a pa‘i ‘ai crostini; and a sliver of Kona kampachi poisson cru with Hawaiian chili and liliko‘i (passion fruit) suero.

For dessert, John Cadman presented his signature Pono Pies—nutritious indulgences made with breadfruit grown on site. Each sweet slice incorporated a cornucopia of canoe plants: taro, breadfruit, and haupia (coconut cream), garnished with chunks of purple sweet potato and macadamia nuts. The guilt-free treat was so tasty that people joked about sneaking bites from each other’s plates—though by then everyone’s belly was comfortably full.

The event was a sell-out success, with all proceeds going directly to the “I am Haloa” campaign. Eighty-plus people gathered around the table to share a truly memorable meal, thanks to the many hands that volunteered to help make it happen. The following day, Hana residents shared their treasures with the greater community at the annual Taro Festival. Booths featured handcrafted kapa (barkcloth), homegrown plants, kupe‘e (nerite shell) necklaces, poi mochi and heaping plate lunches. Musicians and hula dancers performed with great heart and sincerity. People from near and far relaxed on the grass, enjoying the entertainment, food and company.

Whenever we sit down together to eat, we’re bound by invisible but profound ties. The lessons we learn during family-style meals can inform us how to manage our natural resources. The ‘āina, the land that sustains us, is ours to share. And according to Hawaiian belief, the natural elements aren’t “resources” at all, but beloved family members.