“Buying local is a priority,” says Ron. “Every year, we make more connections and it just keeps getting better and better.” The couples’ success, they feel, is a result of building and nurturing those commitments. Their loyalty to regional growers is transparent: their menu reveals numerous island sourced products. Their annual anniversary festivities revolve around their Earth Dinner, a tradition started to honor Kaua‘i food growers with a meal created from their harvest.

“We’re learning how to answer the environmental questions better,” says Ron. “I think it’s best to do your own research and learn, instead of accepting what’s common.” The Millers have numerous eco-friendly practices in place at the restaurant, assessing everything down to the crayon stubs left at the table by sticky-fingered toddlers. (They’re given to a local candle maker!) After exhaustive recycling and composting measures (food scraps, cooking oil, office paper, wine corks), close to nothing goes to waste from the restaurant’s daily operations.

Ron got his start in restaurants as a dishwasher and busboy at The Sun Porch in Hopwood, PA back in 1982. He upgraded to the kitchen a few years later. The creativity and camaraderie were appealing to the young, self-proclaimed hippie. He decided to make cooking a career.

Honing his craft at the Allen Room, a homey, 35-seat restaurant in Pennsylvania, Ron learned to make each meal from scratch. Every day he produced a new, handwritten menu and had at least five stocks simmering on the back stove. He learned how to turn a restaurant into a successful business while working at a giant 400-seat restaurant in northern Virginia. It was here that Ron met and married Krissi. In 1997, they moved to O‘ahu, where Ron worked at Roy’s Hawai‘i Kai, an award-winning pioneer of Hawai’i Regional Cuisine. An opening at Gaylord’s at the Kilohana Plantation brought the Millers to Kaua‘i. When Hukilau Lanai opened in 2002, the Millers joined the team; eight years later, they bought the restaurant.

As an innovative chef who likes to push his culinary boundaries, Ron actively cultivates his passion for learning. On a recent trip to San Francisco, the Millers ate at 10 restaurants in five days. A traditional Burmese pickled tea leaf salad, called Lahpet Thoke (pronounced “la-pay toe”) caught Ron’s fancy. To add it to his menu at Hukilau Lanai, Ron sourced Cloudwater Tea, the only tea farm on Kaua’i that produces whole leaf tea grown without herbicides or pesticides, harvested and processed by hand.

Ron rang in the new year by hosting a charcuterie class at Hukilau Lanai taught by Francois Vecchio [[visiting from where?]], a skilled craftsman with great passion [[for what?]]. In three days, Vecchio showed Ron and his staff, as well as other notable chefs from O‘ahu and Kaua‘i, how to turn whole, local hogs into a wide variety of charcuterie, including aspic, sausage and salami.

Incidentally, adventurous eaters craving the Hukilau Lanai charcuterie plate, a revolving medley of headcheese, pâté, and mortadella, must be added to a wait list for the housemade delicacies. The Miller’s skilled staff also makes knackwurst and bratwurst for their annual Oktoberfest Fest menu. 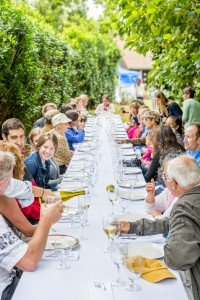 Outstanding In The Field, a national pop-up known for its elegant al fresco dinners, scheduled a Kaua‘i event this past January. It was no surprise that the organizers called on Ron to create the locally-sourced, six-course meal. About forty guests dined together at the long, open-air table set under the shade of mango and tangerine trees at Kaua‘i Kunana Dairy, a certified organic goat farm in Kilauea.

At the dinner, chef Vecchio was honored and charcuterie was served, along with big salads of pickled vegetables and Kunana Diary goat cheese. Fresh mahi mahi, braised goat, Kaua‘i clams and shrimp, ‘ahi, and Koloa Rum were also featured through the meal.

With characteristic aloha, Ron has graciously shared a few of his recipes from that stunning dinner with us here. 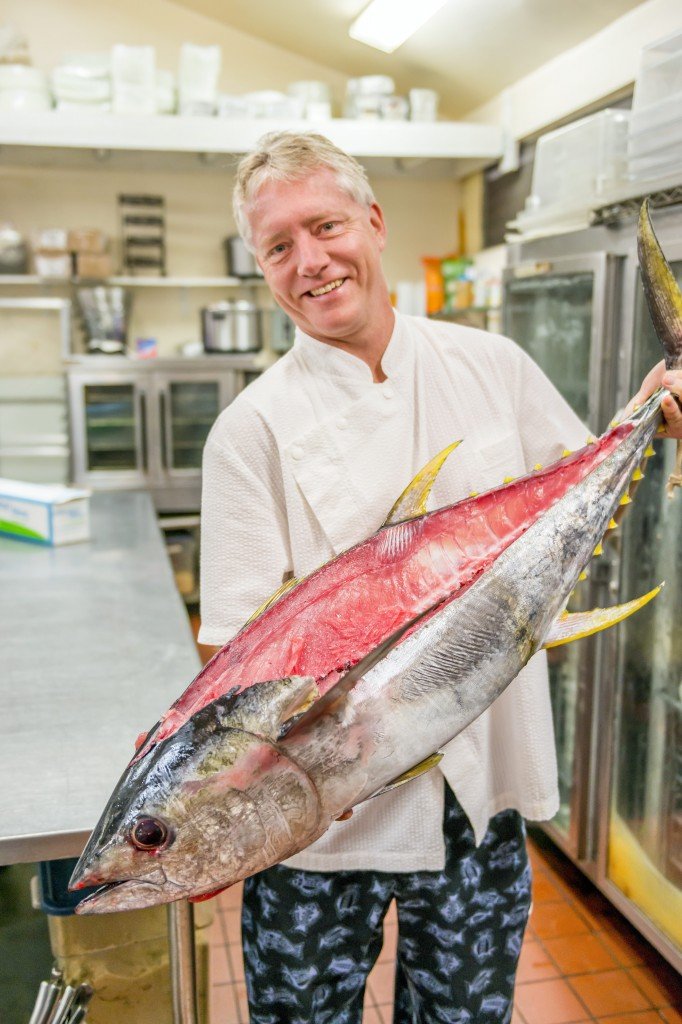