Robert Kanna encountered his first shellfish growing up on Kaua‘i’s west side. “My dad would go diving and we’d play in the tide pools and salt ponds,”recalls Kanna. His interest in sea creatures piqued, Kanna attended Oregon State University where he earned a degree in fisheries science.

After returning to Hawai‘i, a stint at O‘ahu’s Oceanic Institute led Kanna to a job in aquaculture on Kaua‘i’s west side where he started farming Pacific white shrimp, sold as Kauai Shrimp.

Mercenaria mercenaria, known as littleneck clams or simply hard clams, occur naturally along North America’s eastern seaboard. The farm starts with 4 mm clam “seeds” from Florida and New Jersey which are shipped to Kaua‘i planted in upwellers and later cages. Salt water pumped from 500-foot deep wells passes continuously over the clams for 11 months, providing them with oxygen and phytoplankton until they’re big enough for market.

Kanna’s crew currently harvests only about 125 pounds a week, which is quickly bought up by local chefs and two Kaua‘i grocers: Ishihara Market in Waimea and both Foodland stores on the island. Outside of Kaua‘i the only place you’ll find these clams is Mama’s Fish House on Maui.

What are Kauai Clams like? Above all, they’re fresh—reaching market just a day or two after being harvested. Kanna’s favorite way to eat them is raw: “No shoyu, no lemon, no nothing,” he says—just straight from the shell. “The flavor is amazing.” 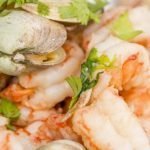