Slowing down has allowed James Babian to reenergize his love for food and family. Last year, Babian transitioned from a grueling position as executive chef of a four-star resort to ownership of a family-run restaurant. Now he’s able to wholeheartedly pursue his passion for providing the Big Island with an authentic taste of Italy.

In early 2013 Chef James Babian and his wife Christine opened Pueo’s Osteria in Waikoloa Village, a restaurant that caters to locals, visitors and their peers in the hospitality industry. [Pueo is the native Hawaiian owl, and the restaurant caters to night owls by staying open until midnight.] The idea came from his and his wife Christine’s love of Italian food after a recent trip to Italy. James has Sicilian roots on his mother’s side and always remembers growing up being exposed to superb food and how it positively affected his soul.

Indeed, the restaurant has a family feel. Christine is there all the time, greeting everyone hello and goodbye. Her influence extends to the decor, menu and recipes. Through the osteria (basically an Italian version of a bistro), the Babians reinterpret the authentic flavors of Italy without ever losing the flavor of the islands.

After working in his family’s restaurant on the East Coast where he grew up, Chef Babian attended the California Culinary Academy in the early ‘80s. He came to Hawai‘i in 2000 where he worked at the Fairmont Orchid as Executive Chef. After seven years, he moved to the Four Seasons Resort Hualalai, ranked as one of the top resorts in the world. During his time there, he helped champion the concept of RSA, “Regional, Seasonal and Artisanal” menus.

His steadfast philosophy is to create rewarding dining experiences that are culinary adventures. “I like to stay in the region, buy products only when they are in season, and support all the local artisan food producers I can,” explains Chef Babian about his locally sourced ingredients, which include goat cheese, macadamia nuts, Kona coffee, honey and Hawaiian salt.

Life is different now that he runs his own restaurant catering to the dinner crowd, in contrast to to the 12-14 hour days he spent as an Executive Chef at the resort.

“I spend much more time with my family than when I was working at the Four Seasons,” Chef says. At the resort, I was ultimately responsible for running six operations including the restaurant and 24-hour room service. Now, I run one restaurant and I can get a knife on a cutting board again. I am back out at the Farmer’s Markets, talking to farmers, buying fresh produce and being involved with the daily creation of specials.”

Clearly, he is happy to be in his element of crafting menus utilizing both the finest imported Italian products while choosing the freshest local
ingredients. “If you want to experience how the food tastes in Italy, this is the place. We buy 80-pound wheels of Parmesan each week. My team and I look at three to five variations of a recipe to decide how we can make it more flavorful by applying the plant to plate concept,” Babian explains.
“I don’t know who has more fun, me or the guests!” 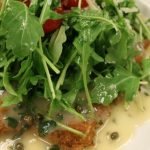