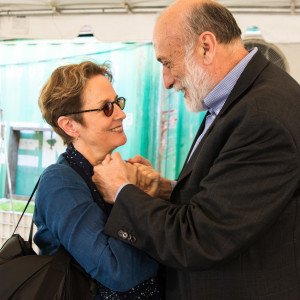 A Conversation with Alice Waters and Carlo Petrini

The backyard of Roberta’s, the Brooklyn restaurant where the event was held, was a sea of pizza boxes and checkered picnic blankets. Whatever total capacity was for the outdoor space, it had been reached. Most of the audience were in that 20s-to-30s age group who had never really lived in a world without the influence of Alice Waters or Slow Food (Chez Panisse was founded in 1971 and Slow Food in 1989).

Though in the last decade we’ve witnessed local eating become trendy and urban farming a viable business model, the situation in the United States at the time of Slow Food’s founding was a bit of a culinary wasteland. There’s a good chance your neighborhood farmers’ market didn’t exist. Agricultural biodiversity had nothing to do with heirloom or traditional foods; it was the choice between red, green and yellow apples.

It took the combination of many voices to get us to today’s culinary landscape, and Alice Waters and Carlo Petrini were among the first to lead us there. Petrini planted the seeds of what would become the international Slow Food movement when he protested a McDonald’s opening on the Spanish Steps in Rome. For Waters, it was taste and a trip to France that led her to a lifetime of championing fresh, local foods.

Although in different countries and at different times, they were on the same page. Since 2002, Waters has served as vice president of Slow Food International, solidifying the ideological connection between her work and Petrini’s.

Carlo Petrini spoke in Italian throughout. “Not speaking English is also an example of biodiversity,” he said, getting a laugh from the audience. Though Petrini had a translator on hand, Patrick Martins of Heritage Foods USA did the official translation for the event.

If Petrini’s answers to the moderator’s questions felt like speeches, it may have had something to do with the audience hearing his appeals in Italian first. In a particularly evocative moment, he spoke of what it would be like to describe our current food system (“a criminal food system”) to his grandparents: “Do you know we live in a society where people spend more to get thin than to be fat, to nourish ourselves?”

That’s just the first of many problems Petrini and Waters continue to address when it comes to food. The difficulties seem endless—dwindling biodiversity, water scarcity looming on the horizon, land grabs — and though groups work tirelessly to combat them, it’s an uphill battle. Instilling Slow Food values, a phrase both Waters and Petrini mentioned multiple times, is central to this work.

“When you edibly educate kids,” Waters says, “they have a different set of values when they grow up.”

In a perfect world, Waters would love to see this form of education in every public school, “middle school kids, when they’re in the garden, don’t feel like they’re in school.” She would love to see children get school credit for eating well and be taught to cook with the seasons—ideally with locally and sustainably produced food. Nowadays, though, students lucky enough to have a garden or cooking program have classes slotted in as extracurricular enrichment. But food, Waters believes, is central to a real education. “They aren’t kitchen or garden classes; they’re courses in the lab of the garden and in the lab of the kitchen,” she says.

Though Petrini’s vision of educating new generations focuses more on the family—traditions and knowledge passed down from grandparents to grandchildren—he stands firmly beside Waters’ convictions.

“Alice seems all passive and tranquil but she is a force of nature,” he says. Farmers’ markets did not exist on the scale that they do now when he met her. Today a resurgence of markets in the United States and Europe has led to these events being known not in their native tongues but under the Americanized label of “farmers’ markets.”

It’s fascinating that the United States has become such a mecca for the food movement—and maybe it’s because we only had room to improve after exporting fast-food culture. In the last 20 years, Petrini had seen “unbelievably good things” coming from this country. He recalled there being only two kinds of beer when he first came to the United States. Now microbreweries spring up faster than a litter of rabbits. Organics and school gardens are proliferating. Where once generic cheddar, Kraft singles or Velveeta were the norm, domestic artisanal cheeses have come into their own.

“You were eating all these delicious microbes out of Europe and killing the same microbes here in the States,” Petrini says. Not any longer.

Because one of the most important changes is that events like the Carlo Petrini and Alice Waters talk exist at all. Though Slow Food certainly paved the way for creating a community around food, there are now scores of events and organizations devoted to eating carefully sprinkled throughout the United States. Even in New York City, people are doing their best to connect to their food. When Petrini asked how many attendees had gardens, roughly half the audience at Roberta’s raised their hands.

Her reflection goes to show that not everyone falls into food advocacy for the same reasons or knows how far it will take us. Yet here we all are. And largely thanks to Petrini and Waters’ leadership, change has happened, is happening, and will continue to move forward for another 25 years and beyond.
For a recording of the interview, go to heritageradio.org.

Tove Danovich is the Founding Editor of Food Politic: Journal of Food News and Culture. Her work has been published in Modern Farmer, Miracle of Feeding Cities, Civil Eats, and others. She is currently working on a book about animal agriculture, sustainable farming, and vegetarianism.