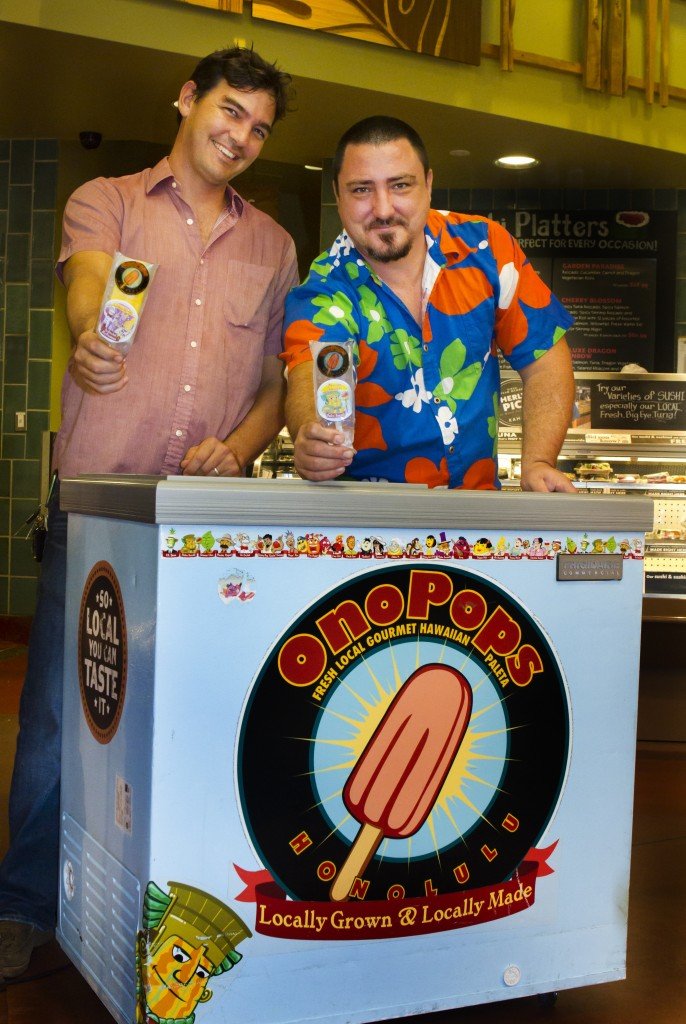 Josh Lanthier-Welch can recite every ingredient in every flavor of popsicle he’s ever created. As chief operating officer and executive chef of OnoPops, headquartered in Hawai‘i Kai, Josh has progressed from pouring his fruity concoctions into molds and freezing them at home, to producing up to 2,700 frozen delights per day using sous vide machines, blast chillers, and a state-of-the-art Carpigiani batch freezer.

It began in the fall of 2009 with a call from Josh’s brother Joe, OnoPops’ chief financial officer and director of sales. “Joe called from a gourmet popsicle shop on the east coast,” Josh recalls. “He left me a rambling message about how he was eating a basil-blueberry popsicle and couldn’t believe how good it was. He said we had to do this in Honolulu.” Josh was working as a chef in San Francisco at the time. “My first response was, ‘There’s no way I’m moving back to Honolulu to open a popsicle company.’”
But Joe persisted, and when the restaurant Josh had been working in closed due to the recession, and their parents’ ‘ohana unit became available, “I had no more right of refusal,” laughs Josh. “It all added up just like that.”
In April of 2010, the two Punahou School graduates launched OnoPops with eight initial flavors, all made with local ingredients. Within six months, consumers could purchase OnoPops at Whole Foods and Foodland. In September of 2013, OnoPops was named Whole Foods’ Partner of the Year. “We were struggling to break even, and at a point where we were wondering whether or not we should keep going,” says Josh. “This recognition from Whole Foods gave us a new wave of optimism. They offered us an opportunity to participate in their small producer loan program, and with this kind of partnership we can keep going.”
This spring, OnoPops expanded to the U.S. Mainland in 35 Whole Foods stores, and the Welch brothers have dreams of franchising their brand. “The heart of OnoPops will always be our three core ingredients—Waialua Estate chocolate, Kona coffee, and Mauna Kea green tea—no matter where in the world OnoPops are made,” says Josh. But the rest of the ingredients will always be sourced locally.”
Josh opens up a chest freezer, the vapor dissipates to reveal OnoPops in every color of the rainbow. “We have a repertoire of 75 flavors, with 25 to 35 on hand at any one time,” he says. “I’m always thinking ahead about new flavors. Josh and I do an eight-popsicle tasting and the hands-down winner, at least in my book, is the Mexican Chocolate. It’s definitely not the Fudgsicle I grew up eating. Creamy, rich milk chocolate is infused with a touch of local cinnamon, vanilla, and mild organic ancho chile powder. It’s the stuff dreams are made of.”
Josh attributes the success of OnoPops to dogged hard work. “I spend about fifty hours a week making popsicles, and between five and fifteen selling them and doing product demos,” he says. “I’ve sacrificed being anyone other than the ‘popsicle guy.’ But I’m not complaining one bit.” 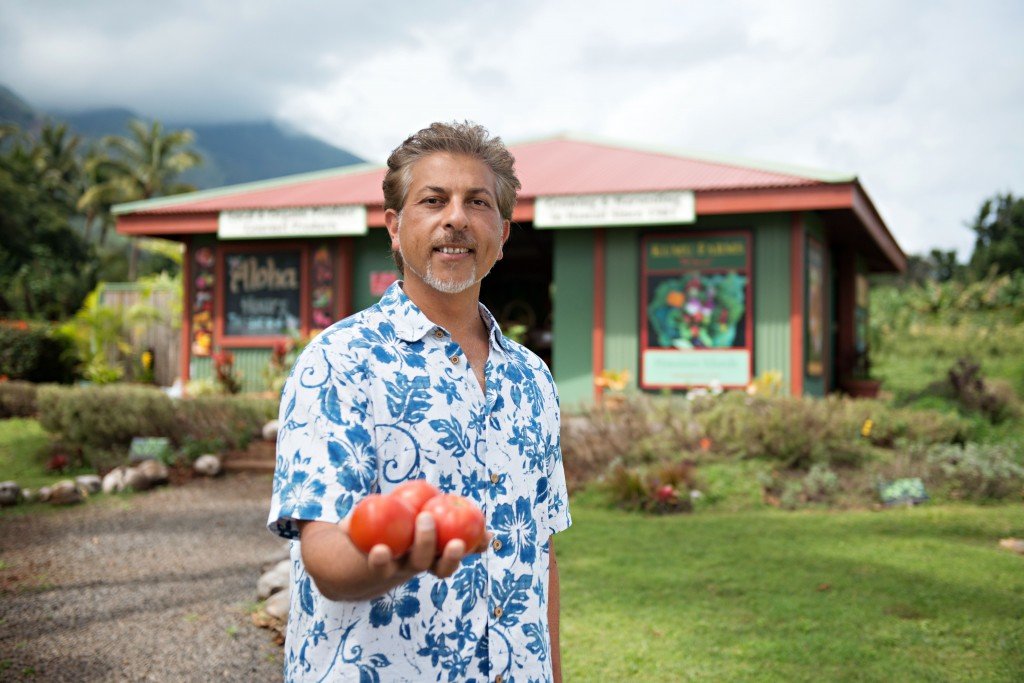 Dressed in sneakers, denim jeans, and a long-sleeved plaid shirt, Azeem Butt could pass for a Silicon Valley engineer. This is no coincidence. Prior to founding Life Foods, Inc., in January of 2013, Azeem was involved in several technology and telecommunications start-ups in the San Francisco Bay Area. “But food has always been my passion,” he says.
Headquartered in Wailuku, Maui, Life Foods manufactures a line of 12 products: patties, condiments, dressings, hot sauces, sauerkraut, kimchi, tempeh, and gomasio—all of which are superfoods-based, 100 percent organic, non-GMO, vegan, and soy and gluten free. “Our goal was to have a strong presence on Maui and Moloka‘i, which we accomplished last year,” Azeem says. “This year, we’ve expanded to O‘ahu, and we’ll add more products to our line.”
The first three months in business, Azeem didn’t sell a single product. Instead, he tested his goods at farmers’ markets. “We did more than 7,000 tastings, and handed out surveys to obtain feedback,” he says. “Our chefs continuously made refinements based on the comments we received. By the end of March, people were asking, ‘Where can I buy these patties?’ and, ‘I love this ketchup. Where do you sell it?’ When we placed our products at Alive and Well, Down to Earth, and Mana Foods, we already had customers waiting to purchase them.”
Azeem acquires as many ingredients locally as possible, to support what he calls Life Foods’ farm-to-shelf approach. “Our goal is what I call the ‘green circle,’ where we source within 300 miles, and produce from our facility to the shelf within three weeks,” he says. “We’re not quite there yet, because some of our dry goods, plus mung beans, come from the Mainland. There’s currently no local source for these ingredients.”
Life Foods grew from Azeem’s desire to provide healthy vegetarian food options for himself and others. “A lot of good product ideas come from a personal passion for something,” he says. “You can’t just pick what you think is a random need in the marketplace—it should be your own need. Otherwise, you won’t have a connection to it. I actually have people come up to me at farmers’ markets, shake my hand, and say, ‘Thank you so much for doing this.’ That never happened to me before, and I think it’s because Life Foods products fulfill my food needs, and theirs as well.”
Azeem’s mission was validated at last year’s Body and Soil Farm-Health Conference, held annually on Maui. “We were one of many vendors selling food,” he recalls. “Right next to us was a company barbecuing locally grown beef patties. The aroma was extremely enticing, and I was sure we’d have a lot of our food left over. Amazingly, six out of ten guests chose our patty over the ones made from beef. It was my most satisfying moment yet.”
Azeem has plans to take Life Foods to the national stage. “I want to establish kitchens that create farm-to-shelf products in all areas of the country,” he says. “The model we’ve created here on Maui can be replicated all around the United States.” 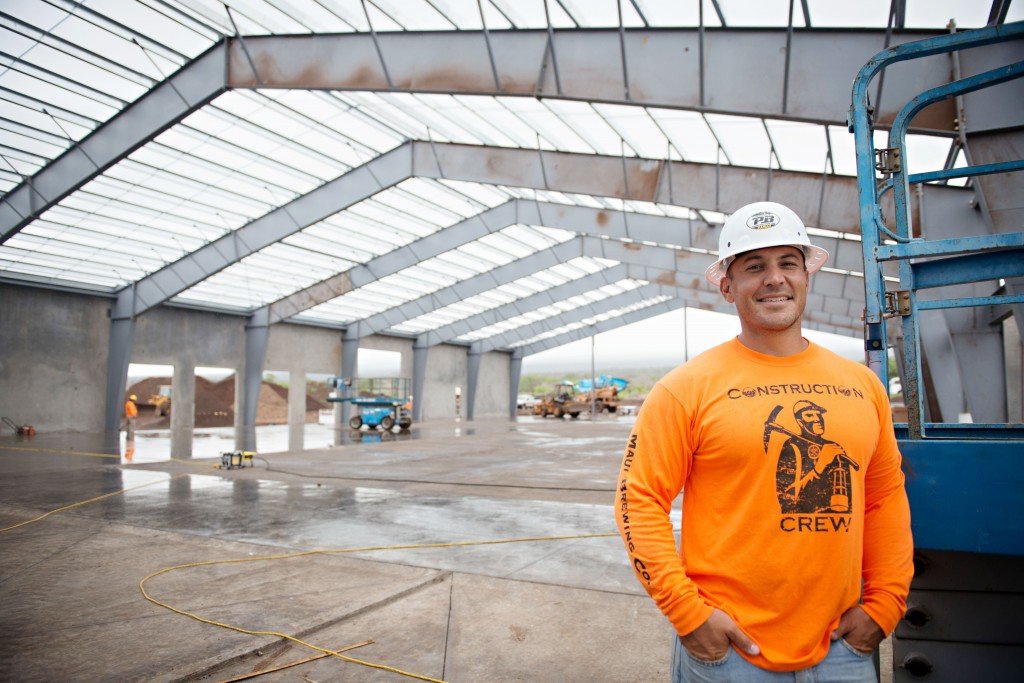 In 2005, Garrett Marrero, along with wife Melanie, founded Maui Brewing Co.’s  Kahana brewpub, where they produced 300 barrels of handcrafted ales and lagers their first year in business. Two years later, they opened a production facility in Lahaina, where they currently brew more than 20,000 barrels per year. This year, they’ll open a larger production facility, brewpub, and tasting room in the Maui Research and Technology Park in Kihei, where they’ll be able to double production.
When I meet up with Garrett at his construction site in Kihei, he’s sporting steel-toed work boots, faded jeans, and a bright orange Maui Brewing Co. t-shirt. He tells me he’s always ready to fill in if needed to keep the $17 million construction project on schedule. “One day, my contractor didn’t have a welder to finish a critical job,” he recalls. “So I got in the ditch at nine o’clock that night and shone my truck’s headlights so I could see what I was doing. These guys had never before seen a company owner go out and buy boots and jeans, and pull tools out of his truck.”
Garrett believes his hands-on approach is one of the keys to his success. “In the beginning, Melanie and I did everything on a shoestring budget and wore a lot of hats,” he says. “But this made us very skilled at what we do, and we are intimately familiar with every aspect of our business. It strengthens our team when employees see that we’re willing to do whatever’s required to get the job done.”
Equally as strong as his work ethic is Garrett’s commitment to the Maui community. “Using the best local ingredients available to us is something we do as a matter of course,” he says. “We incorporate local guava, mango, papaya, and even breadfruit in our beers. Our breadfruit beer is still the most requested brew, even though we only made it once because it was such a challenge to produce. Sourcing 3,000 pounds of fruit in just the right stage of ripeness, plus ten pounds of toasted papaya seeds, made it a labor of love.”
Maui Brewing Co.’s symbiotic relationship with local farmers should be a model for all businesses. “We purchase produce from farmers who use our spent grain to feed their cows, then we serve their beef in our restaurants,” Garrett says. Breads and buns served in the brewpub are also made locally with spent grain. “If something can be produced for our restaurants on island, it is. We even make our own ketchup, salad dressings, and mustard.”
Garrett’s beers are distributed in 11 states and four foreign countries. “It’s gratifying to go to a restaurant somewhere in Virginia and see Maui Brewing Co. on the menu,” he says. “It conjures up a ‘we did that’ kind of pride.” Garrett says his best-selling brew in Hawai‘i is Bikini Blonde Lager. It’s easy to see why. With light carbonation and crisp, fruity notes, this filtered Munich Helles Lager brewed with floral hops and Pilsner and Munich malts is appealing to even a non-beer-drinker such as myself. Cheers!