Falling In Love with Koji

I’m in love with a mold. I know this seems a bit odd, pretty weird even, but my work as a zymologist is driven by my fascination with the transformative actions of bacteria, yeasts, and molds on foods. Falling in love with a microbe isn’t all that strange in my world. When a relationship like this one blossoms, monumental advancements take place within gastronomy. These microbes are the ones responsible for some of our most beloved foods. Cheese, chocolate, beer, bread, pickles, and miso are all foods that we love dearly, so why shouldn’t that feeling be parlayed to the beings re-sponsible for making them?

I fell in love with the mold known as koji a little more than two years ago, while working with my friend Jonathon Sawyer at Tren-tina. Chef Sawyer asked that I start making miso out of garban-zo beans for use as an ingredient. Koji, whose scientific name is Aspergillus oryzae, is the mold responsible for the autolysis, or breakdown, of beans into a fermentable medium. You simply cannot make miso without koji. This was the start of a love affair that has grown into an undying passion for me.

When you work with fresh koji, it’s easy to understand how one can fall under its spell. Molds responsible for making foods like blue cheese and charcuterie smell either sour or of ammonia, or they reek like a damp cellar or wet dog. Koji smells like a sweet fra-grant combination of apples, fresh yeast, champagne, and honey-suckle. When you smell it for the first time, you see why people decided to use it as a food more than 9,000 years ago. It’s irre-sistible. Foods made with koji contain such depth of complex and nuanced tastes and flavors that they are unrivaled.

After 9,000 years of dominance in Asia, koji is finally embarking on a much-welcomed global conquest, making an appearance in restaurant kitchens from Copenhagen to St. Petersburg, Mexico City, and even Cleveland. You don’t have relegate koji to Asian-style foods. It’s just as much at home with a burger and fries as it is with miso soup and sushi. I predict that in the next five to seven years, koji, in some shape or form, will be a go-to ingredient in your kitchen.

Koji has a long and varied history. It’s believed that it was domes-ticated shortly after rice, somewhere around 7,000 BCE on the Korean Peninsula or in China. After domestication, its users real-ized it could transform the unfermentable long-chain starches in rice into simple fermentable sugars. Its discoverers also realized it could do the same for the complex proteins found in beans by turning them into extremely tasty amino acids.

After these discoveries, people developed many applications for koji, and it spurred countless types of foods. The most commonly known ones are Japanese: soy sauce, miso paste, and sake. Ver-sions of these foods exist in their own unique ways in China, the Koreas, Thailand, Vietnam, Taiwan, and several other Asian and Southeastern Asian countries. In fact, within each country there are several diff erent versions of each of these foods. Koji is Japan’s national mold. Koji makers in Japan are so revered, that they enjoy the same status we grant to our celebrity chefs. Koji’s magic is that powerful. 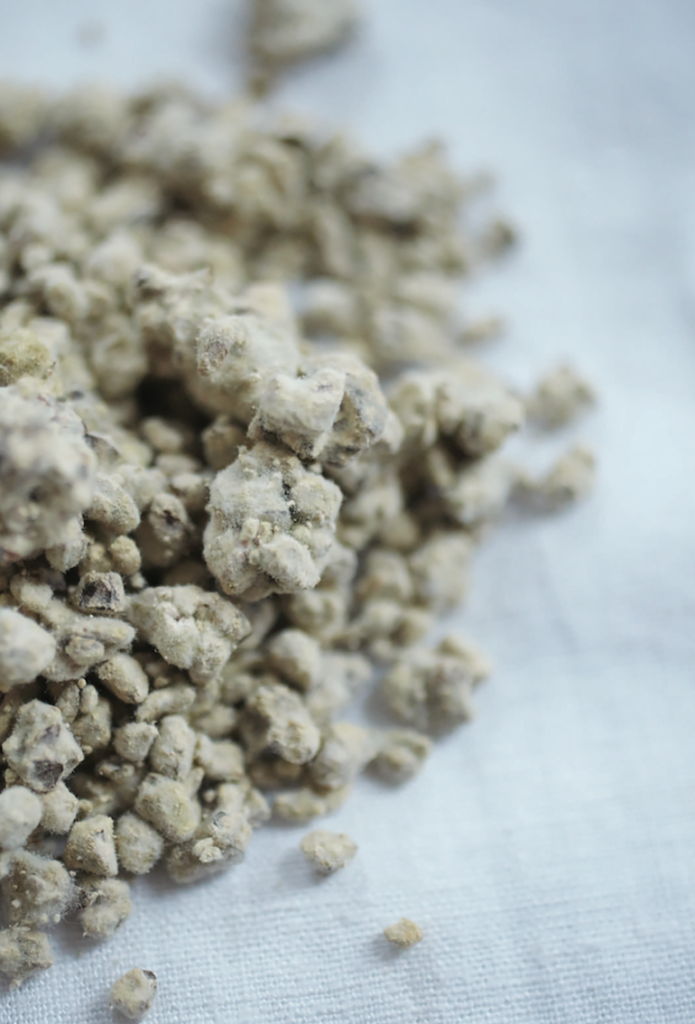 Koji is a mold, and molds are fungi. Fungi are enchanting organ-isms that are so distinct in their physiology and morphology, they have a taxonomic kingdom all to themselves.

The lifecycle of a mold or fungus begins as a spore. The spore is something akin to the seed of a plant or the egg and sperm of an animal. Once a spore starts its life, it produces tiny filaments called hyphae. These hyphae eventually form mycelium, a dense mass that resembles the roots of a plant. The hyphae and myce-lium grow on and in various substrates, wood, insects, soil, and animals, and break them down using enzymes. The fungus then absorbs the remaining base nutrients after this breakdown.

Koji produces two types of powerful enzymes—protease and amylase—as it grows on cooked grains or seeds or just about any-thing. Proteases break down proteins, and amylases break down carbohydrates. Koji is unique because of how fast it does this.

Once koji spores have been incubated on cooked rice or other foods, the fl avor, taste, and aroma changes associated with this enzymatic breakdown are fully noticeable within 48 hours. That’s incredibly fast. It may take many months to see a similar transfor-mation if you were to look at this process in a fruiting fungi, such as oyster mushrooms.

Soy sauce, miso paste, and sake are just the tip of the iceberg. Many more foods are made using koji. Two of the most prominent are Amazake (sweet koji) or Shio (salted koji). These two foods are made by mixing koji with cooked rice and water in Amazake, and koji with water and salt to yield Shio. Both Amazake and Shio are used to make a variety of foods or even consumed as is.

The Japanese drink Amazake is consumed for its healthful proper-ties, much as many Americans drink kombucha or other hip pro-biotic beverages. Amazake is also an important ingredient in sake and rice vinegars. When pitched with yeast, Amazake ferments into sake, which can then be fermented into vinegar.

Shio is used as a seasoning when cooking and also as a medium to cure or pickle vegetables and proteins. Other uses include making a variety of amino (umami) sauces, ice cream, and baking bread. 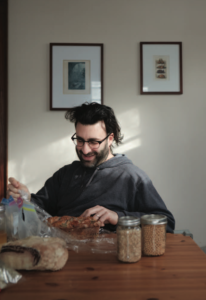 Two years ago, I had an epiphany. Given koji’s traditional uses and its ability to transform foods, could I harness this in a new and surprising way? Could I use koji as an age-accelerant for fresh cuts of meat and seafood or for charcuterie? I decided to put this to the test.

The first thing I did was set out on a mission of academic research. I couldn’t find any easily accessible information about using koji in this way. So I reached out to various people in Japan to see if this was some-thing that had been done before. Again, nothing. After that I decided to just go for it.

My first test was growing the mold on scallops. I figured that if I could do that without spoiling them, I was on to something. I gently seasoned the scallops, coated them with rice fl our and koji spores, then set them up in an incubation chamber with 95% humidity at 90° for 48 hours to culture. When I checked them after the 48-hour time limit, I was amazed. The intoxicatingly delightful aroma of koji mixed with the crisp briny aroma of the scallops was so intense that I started to salivate. I cooked them up immediately and was further amazed. The fl avor, taste, and texture were unlike any food I had ever experienced. 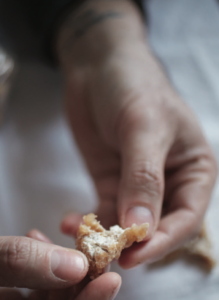 This spurred more investigation and experiments. Beef, llama, venison, lamb, duck, chicken, and a host of grains, seeds, and pulses were all sub-jected to koji culturing. Each experiment yielded a food that amazed and enchanted my colleagues and me.

I also realized how fast this process is. I could create a koji-cultured steak in two days that was comparable to a 30-day dry-aged steak. Cuts of charcuterie that would normally take two months or more to make using traditional methods were ready to slice and eat within 14 days. This was truly unique, not only due to this accelerated timeline but also due to the intoxicating aroma, flavors, and tastes developed by the koji.

Koji’s uses and results in the kitchen are so magical that once you ex-perience them, you’ll become as passionate as I am. From an aging and charcuterie accelerant, to a seasoning and pickling medium, the uses for koji are just beginning to be explored in a broader and nontraditional context. I’m curious to see where this wonderful modern embrace of an ancient food might lead us.

This story originally appeared in the Spring 2017 issue of edible Cleveland (ediblecleveland.com).

HOW TO MAKE KOJI AT HOME