Going locavore is relatively easy in Hawai‘i. Island farmers produce almost every imaginable vegetable, fruit, protein, and spice, year-round. Grains are scarce, but they can be replaced with breadfruit and tapioca, both of which make great flours. And thanks to local coffee, cacao, and wine orchards, even your vices are covered. In fact, when creating a 100-percent Hawai‘i-grown menu, you’ll encounter just one missing ingredient: cooking oil. Unless you press your own, you’ll have to cheat.

Dig a little deeper, though, and you’ll unearth a bigger dilemma. “Grown here, not flown here” may apply to your sweet potatoes, kale, and carrots, but all of these crops rely to some degree on imported fuel. Fossil fuel powers the farm equipment and the planes and barges that deliver seeds, tools, and bags of fertilizer. Add this all up and you realize: sustainable, local agriculture requires sustainable, local energy. The tourists snapping giddy selfies at the new sunflower farm on Maui probably aren’t pondering these issues. But this field of bright blooms, which belongs to Pacific Biodiesel, is more than just a cheery roadside attraction. For sustainability advocates, it could be a game-changer. 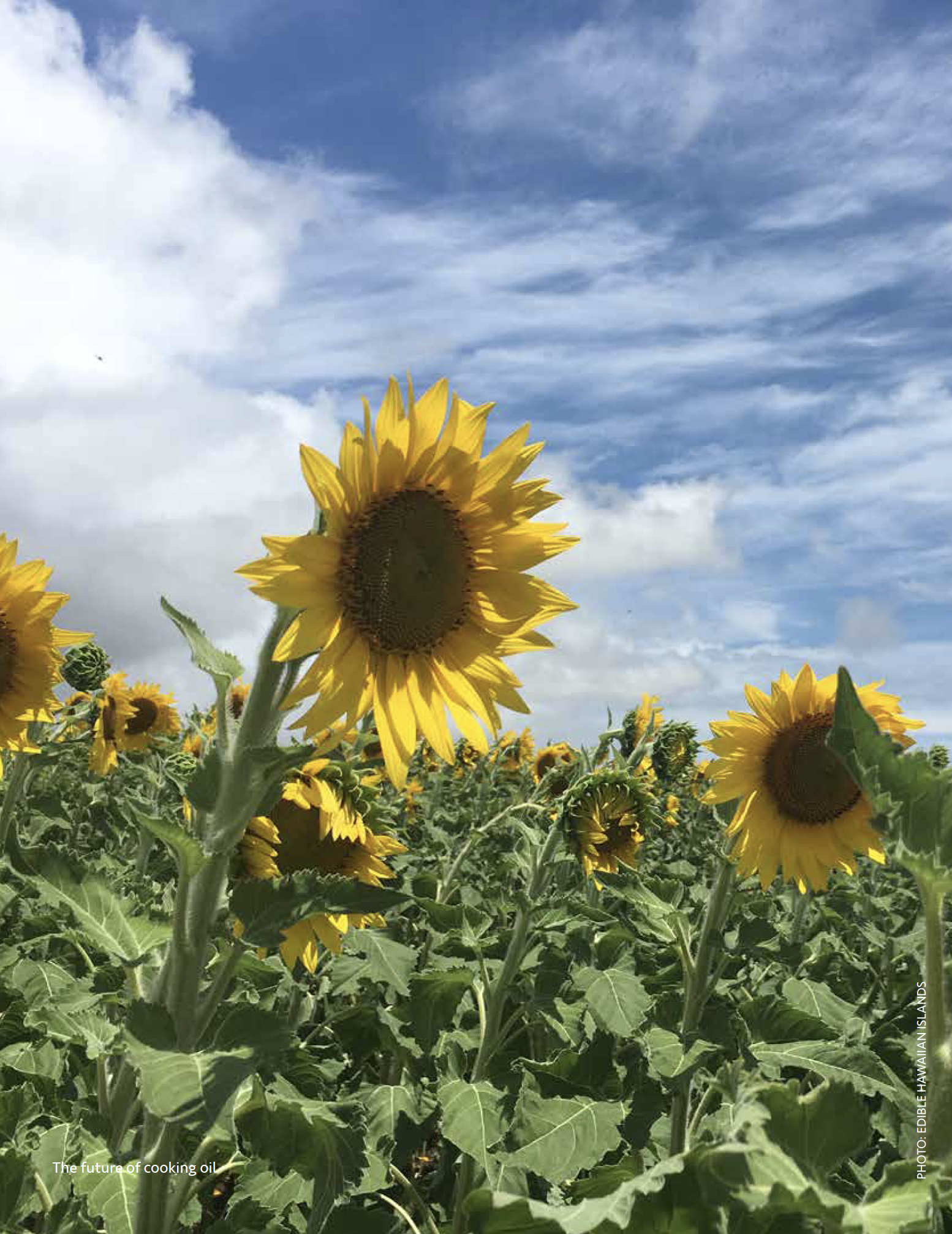 Twenty-four years ago, Pacific Biodiesel owner Bob King was the mechanic in charge of the generators at the central Maui landfill. Restaurant grease was a regular problem there, so Bob proposed converting the waste oil into fuel. He’d heard it was possible. “A year later,” he says, “I had built a biodiesel plant. I don’t wait around when I have ideas.” Bob and his wife Kelly began collecting used cooking oil from Maui restaurants and turning it into tank-ready fuel. Their plant was the second of its kind in the world and their retail pump the first in the nation. “We were pretty early in the industry,”

Bob says. So early, in fact, they snatched up the domain www. biodiesel.com. Over the years, the Kings built twelve biodiesel facilities across the U.S. and Japan. They weathered industry bumps. When regular diesel prices dropped, many biodiesel companies couldn’t compete and folded. Pacific Biodiesel hung on.

In 2012, the Kings opened a state-of-the-art distillation facility in Hilo. “We had to do a systemic change to meet new emissions standards,” says Bob. They had a choice: relocate to the mainland where the majority of their business was, or expand operations in Hawai‘i. “We chose to stay. We picked the Big Island because that was where the innovative farmers were at,” he says. Used cooking oil wasn’t as available as it had been, so they started collecting trap grease—a good deal grimier and harder to recycle. Their new plant allowed them to turn even this waste product into high-quality fuel. “It comes out clear like water,” says Bob.

Where Hawai‘i restaurants once paid landfills to accept their waste oil, Pacific Biodiesel now takes it for free—at a $250,000 annual savings to the industry. The company produces 5.5 million gallons of biofuel a year. Its major clients include the City and County of Honolulu, Hawaiian Electric Company, Daniel K. Inouye International Airport, and Campbell Industrial Park. Trilogy Excursions’ fleet of sailing catamarans runs on biodiesel and thousands of Hawai‘i residents rely on it to fuel their cars. 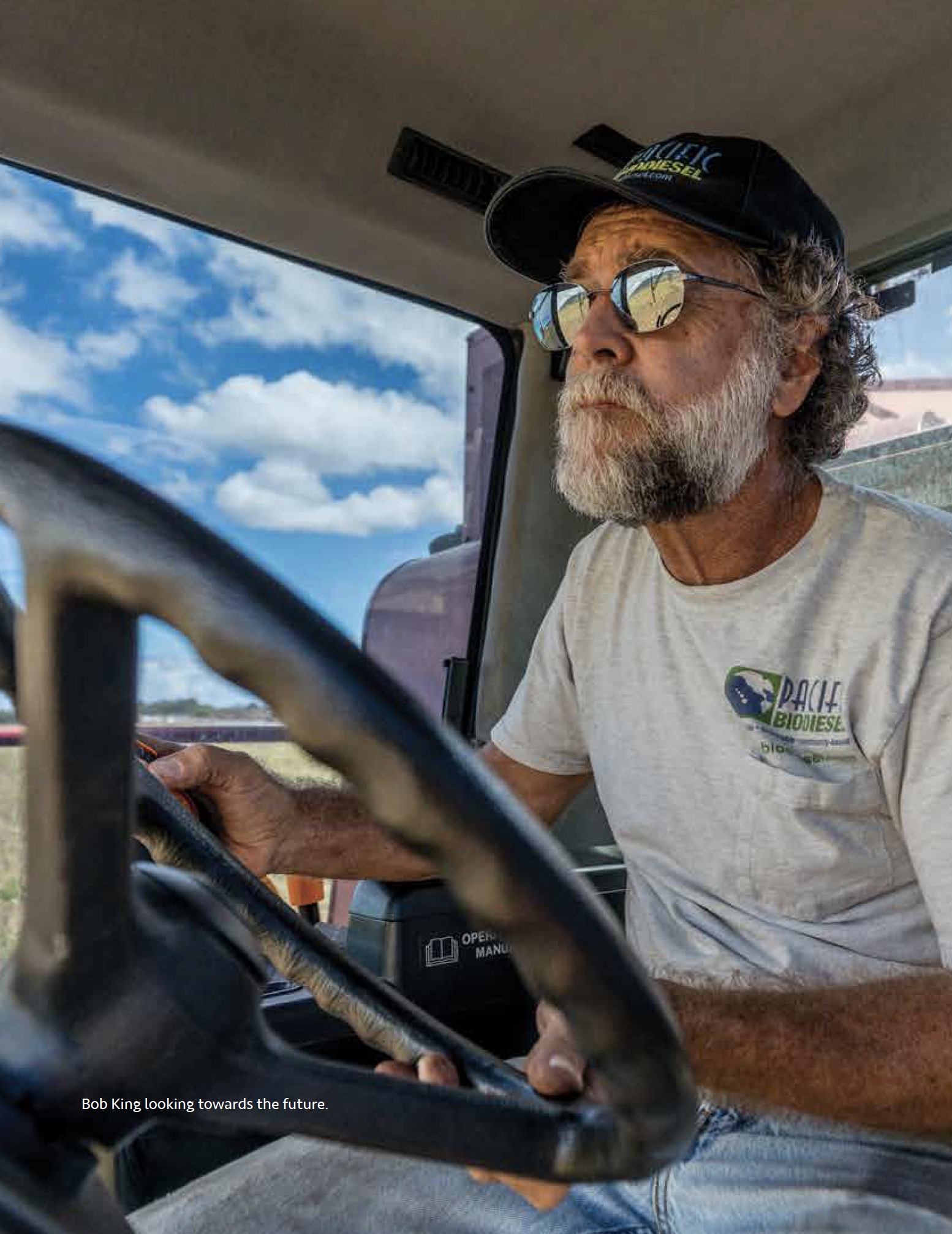 Demand for biodiesel in Hawai‘i exceeds supply; Pacific Biodiesel has to import waste oil from the mainland and Australia. While it’s still better for the environment than fossil fuel, imported grease doesn’t quite fit the company’s mission: to promote a clean, sustainable energy future through the community-based production of renewable fuels. The Kings recognized early on that to meet increasing demand, they’d have to supplement waste oil with something equally eco-friendly. That’s where the sunflowers come in.

“We always knew we wanted to transition to a crop,” Kelly tells the group. But she admits they thought other people would do the farming—which is why they built their distillation plant in Hilo’s farm country. As it turned out, local growers weren’t ready to make the leap from food to fuel crops, so the Kings led the way. In January 2017, they leased 115 acres from Maui Tropical Plantation owner and developer Mike Atherton. They invested in a big red combine and crushing mill and planted oilrich sunflower seeds on former sugarcane land. Central Maui’s arid wind tunnel is a tough climate for many crops. But sunflowers do well in the wind, says Bob. “Over and over, it amazes me how resilient this plant is. It just wants to live.”

The Kings’ first sunflower crop in April of 2017 drew attention— to put it mildly. Around 50,000 people pulled over alongside busy Kuihelani Highway, irresistibly drawn to the blooms. It became a traffic hazard, prompting Maui County to install “No Parking” signs along the highway. The Kings turned this unexpected popularity to their advantage. Partnering with Maui Tropical Plantation, they planted a decoy sunflower field across the street and away from traffic. And now people can also tour the farm—in biodiesel-powered buses. 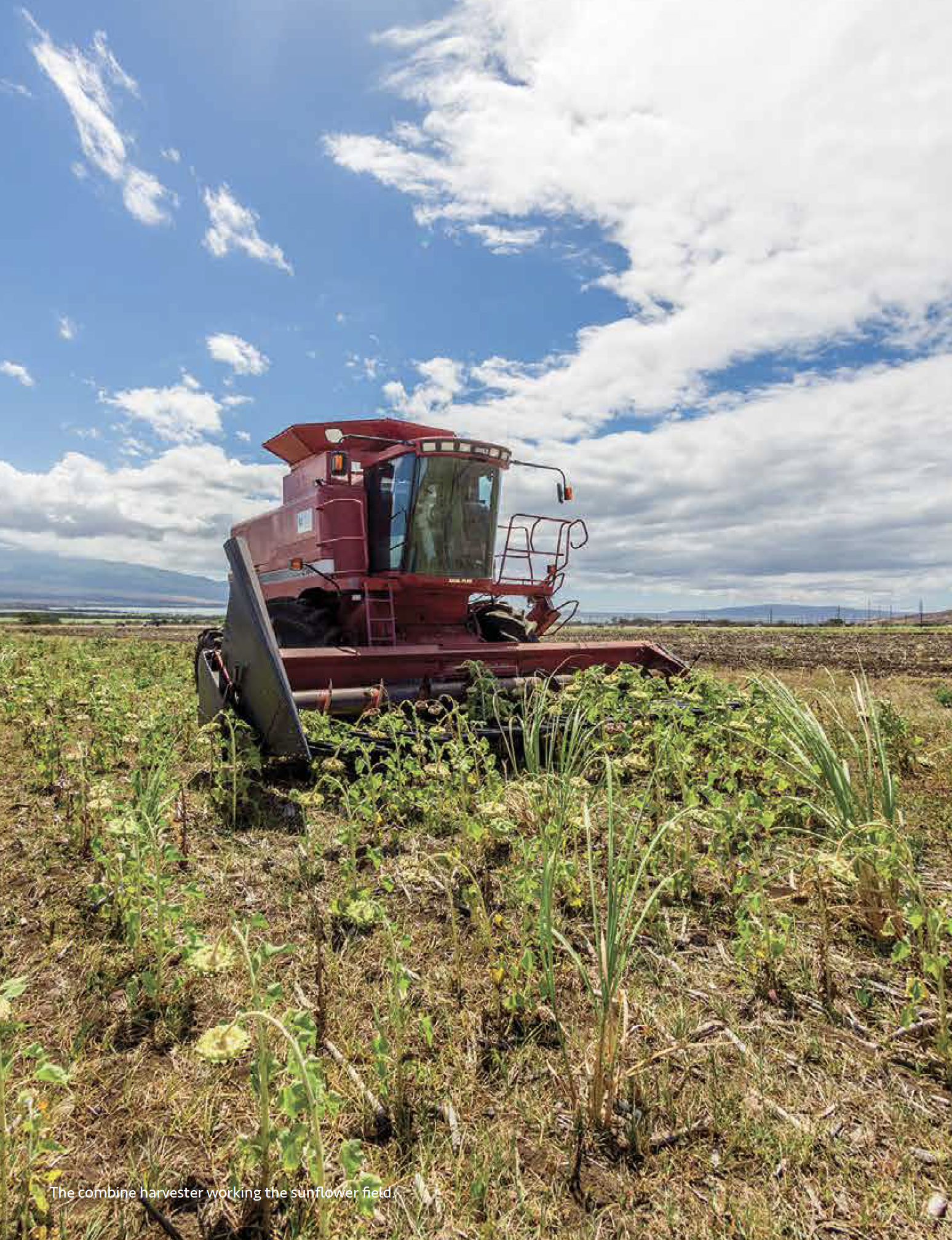 The Pacific Biodiesel farm is a zero-waste operation. The recyclers-turned-farmers don’t use pesticides, additives, or genetically modified seeds. The combine and trucks run on the company’s fuel, naturally, and dark, silt-y piles of compost fertilize the fields. Rainwater serves as the main irrigation. Sunflowers can generate 100 gallons of oil per acre and the production cycle takes “100 days from soil to oil.” During the flowers’ ten-day blooming bonanza, they are pollinated by hundreds of thousands of honeybees. Local honey is a sweet byproduct of the operation. The primary products: biodiesel and cooking oil.

“We live on an island,” says Kelly. “If the ports stop working and we have crops that can be food or fuel, that’s really good.”

Sure, the sunflowers are stunners, but how does their oil taste?

The Kings have produced three batches of sunflower oil so far. Still in the testing phase, they’re passing out small bottles to local chefs for review. The Maui-grown oil has several things in its favor beyond its local origin. For starters, it’s expeller pressed. Most conventional cooking oil is extracted using chemicals and high temperatures, which results in bland flavor with few nutrients. In contrast, Pacific Biodiesel uses a crushing mill to extract the oil. The result is a bright yellow, viscous liquid—much like bottled sunshine.

The feedback thus far has been positive. Allen Hess of Mai Grille on Hawai‘i Island described the sunflower oil as “sweet, light, and grapeseed-ish” with a lingering flavor that includes herbal, seed, and pollen notes. He tested it in a wide variety of applications, with everything from roasted vegetables to raw poke, goat cheese, and whiskey. “It worked great with lighter fish and ingredients,” he says. “It was a big surprise with whiskey; they were very good together.” 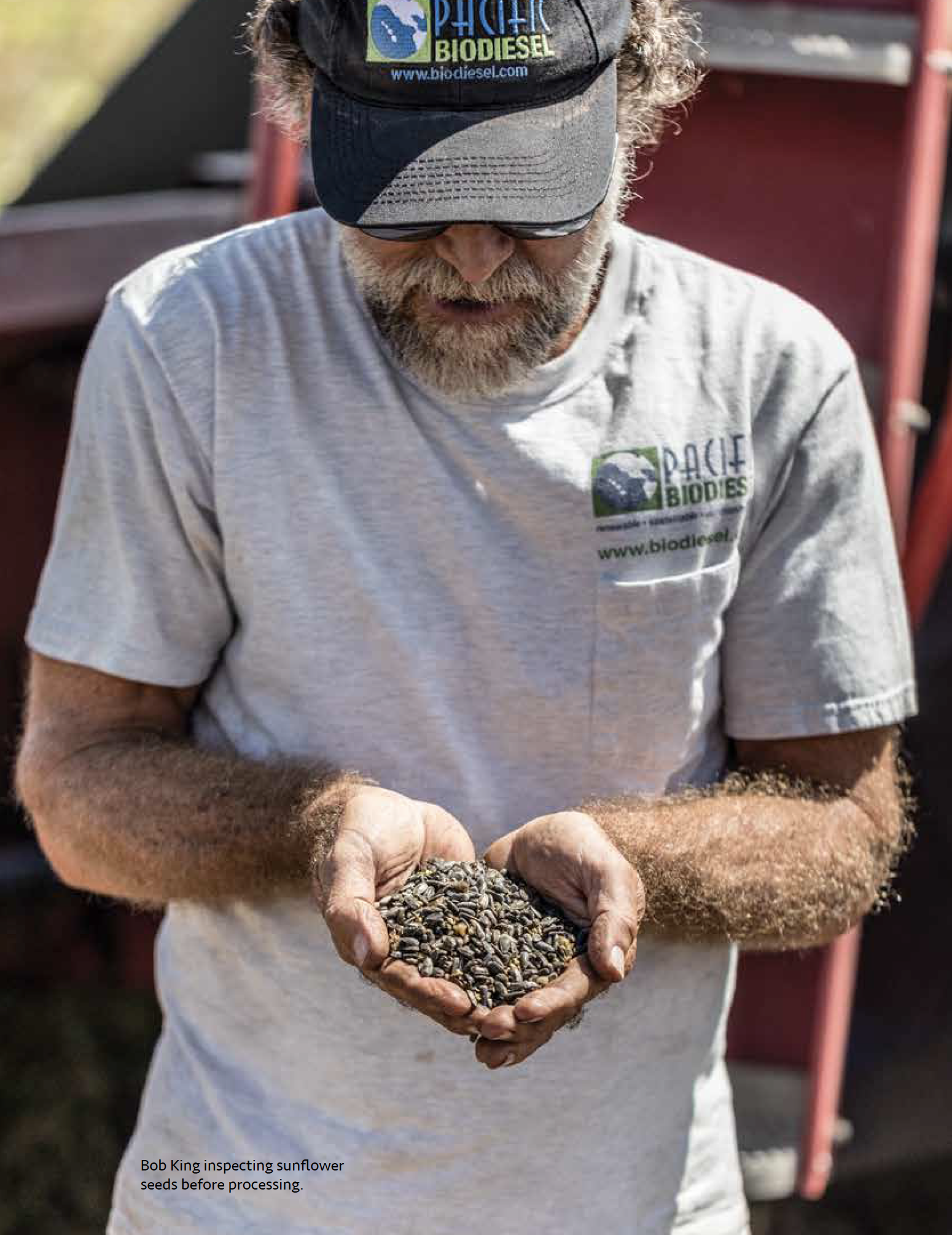 “The sunflower oil has a clean taste, subtle scent and flavor,” says chef Jana McMahon from Maui. “It’s very versatile.” Chef Lee Anne Wong of Koko Head Café on O‘ahu praised the oil’s clean flavor, comparing it to “fresh young olive oil, with plenty of grassy and green notes.” “The sunflower oil is an everyday use type for me, so I’m excited to cook with it more.” Ron Miller of Hukilau Lanai restaurant on Kaua‘i agrees. “This is the first cooking oil produced in Hawai‘i that I have used,” he says. “Of course quality trumps all; we can’t use a local product unless it is of high quality. I believe we have it.”

In addition to sunflower, Pacific Biodiesel team is developing other food-grade oils: macadamia, avocado, kukui, and coconut. True to their recycling roots, the Kings buy up macadamia nuts that can’t be sold whole and press them into oil. As if the entrepreneurs don’t have enough pots boiling on the stove, they’ve also launched a cosmetic line. “Kuleana” incorporates all of these locally grown oils into beauty products, massage oil, and reef-safe sunscreen.

Growing food has to be the priority on Hawai‘i’s agricultural land, says Bob. But high-value fuel and cosmetic crops can help prop up food farmers. “The bigger the toolbox, the more options they have,” he says. The same goes for local chefs, who now have another essential ingredient to work with.

Turn the page for Recipe Wave, where we invited three talented chefs, each from different islands, to taste-test the sunflower oil and macadamia nut oil. We thank them for generously sharing their professional thoughts and recipes. 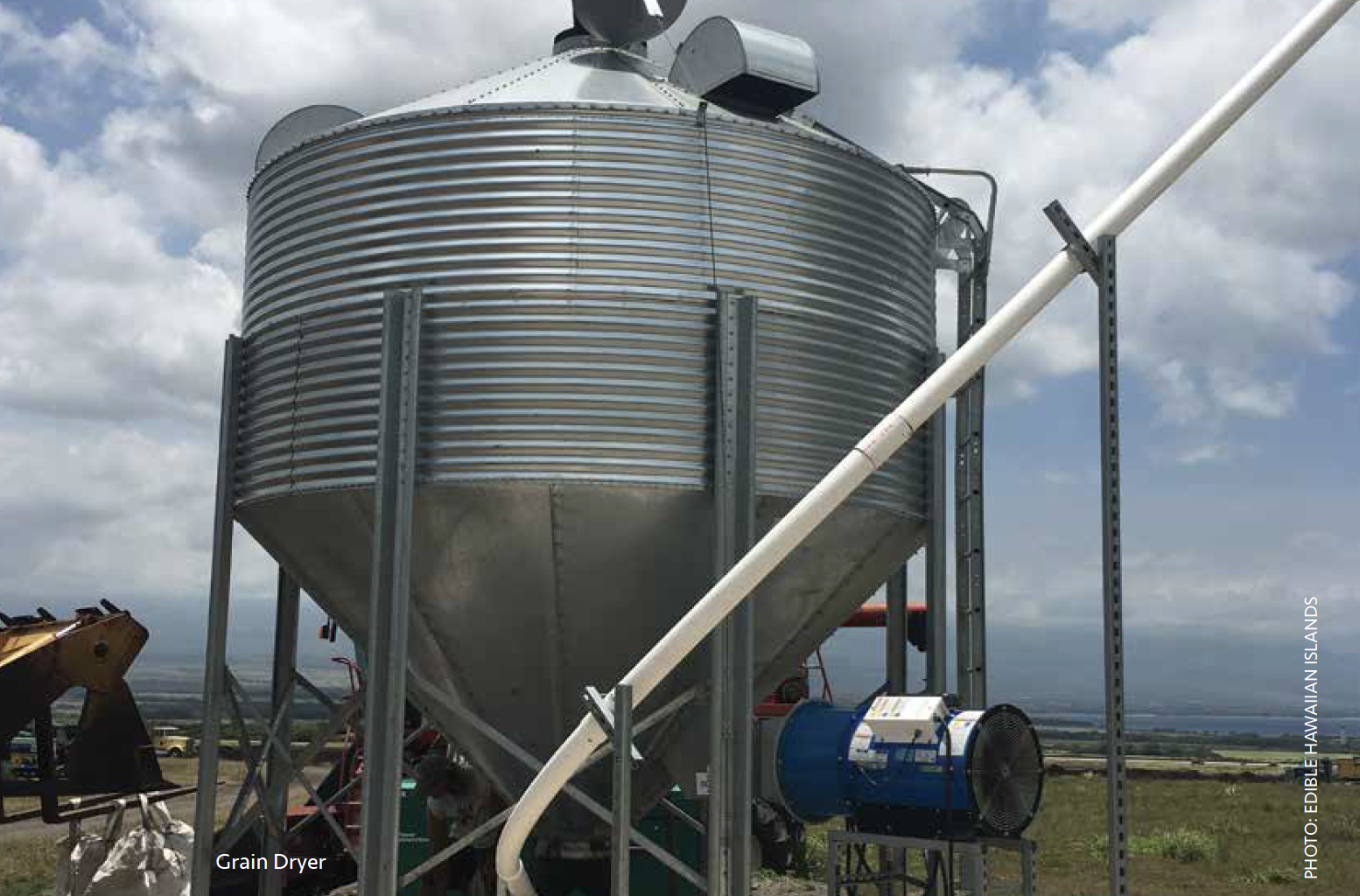