WRITTEN BY ROB PARSONS
SUGARCANE IN HAWAII, FROM THE FIRST PLANTING TO THE END OF AN ERA

SUGAR CANE HAS ENTERED A NEW ERA. The last harvest and closure of the Hawaiian Commercial & Sugar (HC&S) plantation on Maui in December 2016 marked the final chapter in a bittersweet century-and-a half of large-scale sugar production throughout Hawai‘i. Arguably, no other crop has had the influence and impacts of the sugar trade, changing the economy, water systems, eco-systems, land ownership, ethnic mix and politics of Hawai‘i.

But sugar cane, or kō (its Hawaiian name), has a history that pre-dates the plantation era by about a thousand years. As a “canoe crop,” brought by voyaging Polynesians, sugar cane was widely cultivated for hundreds of years, utilized in a variety of manners, and, “played a vital role in the culture and livelihood of Native Hawaiians,” according to ethnobotanist Dr. Noa Kekuewa Lincoln.

As part of his extensive 2017 study, “Kō: An Ethnobotanical Guide to Hawaiian Sugarcane Varieties,” Lincoln opines that traditional varieties will be vital in developing restorative agricultural systems. “Contemporarily, there is a revived interest in indigenous crops and cropping systems,” states Lincoln on the UH-CTAHR webpage for sugar cane. “If the world is to embrace more resilient farming that utilizes fewer inputs and greater diversity, then heirloom varieties – such as kō – will be needed in developing new crops that will thrive in diversified, place-specific agricultural systems.”

The post-plantation era of sugar cane in Hawai‘i may indeed embrace cultivation of long-neglected varietals for uses both traditional and innovative. Thus, King Sugar, long the dominant economic and political force, may now assume a more subservient role in local agricultural production and cuisine. At the same time, fallow plantation lands afford prime opportunities to expand local food production of all sorts. 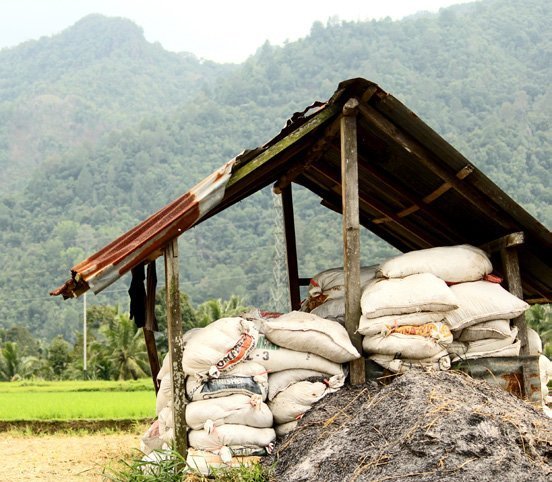 Sugar cane originated in tropical Southeast Asia and the South Pacific. Research indicates it was cultivated in New Guinea several thousand years ago, and spread throughout Polynesia to India, where a crystallization process was developed, making it easier to transport. From there, it migrated with the Arabs, who brought the confection to Europe around 600 years ago. It was grown in the Canary Islands, and brought to the Americas by Christopher Columbus.

The voyages of Columbus and others did not, however, provide a short-cut to the lucrative Spice Trade with Asia. As colonization efforts spread from Europe to the Western hemisphere, the economic potential of growing sugar in tropical regions was realized and exploited. The ensuing Trade Triangle over the next few hundred years brought millions of African slaves to the Caribbean and the Americas, to work on Spanish, French, British, Dutch and Portuguese colonial plantations—all to satisfy the covetous consumption of processed sugar back in Europe.

Across the globe in the Pacific, early traders in the Sandwich Islands capitalized on the native sandalwood tree. Desired in China for making incense and fine furniture, and ultimately sanctioned by King Kamehameha, Hawaiian forests were rapidly plundered in a short period, from 1810-1830.

On the heels of the sandalwood trade collapse, Hawai‘i became a hub for another extractive trade: whaling. In the early and middle 19th century, whale oil was widely used as a source for lighting, heating, and fuel for industrial machinery. As many as 400 whaling ships sailed the Pacific, using Hawai‘i as a port-of-call for provisions. This fostered expansion of farming and ranching, and Hawai‘i also supplied potatoes and vegetables to the West Coast during the Gold Rush and Civil War.

With the discovery of petroleum oil in Pennsylvania in 1859, and the decline of the Pacific whale population, the whaling industry dwindled. In its place arose sugar cane cultivation, the first plantations established in the 1830s. The Civil War shut down sugar production and importation through the South, allowing Hawai‘i to compete in the California sugar market. The Board of Immigration was established in 1866, focused on recruiting plantation workers.

Plantation work was hard, whether in the fields or the wood-powered, steam engine-driven mills. Workers cleared fields, planted and harvested cane, chopped and hauled wood, developed flume systems that delivered water, tended horses and livestock, built plantation camp housing and stores, and performed a myriad of other tasks. Elaborate railroad systems were constructed on O‘ahu, Kaua’i, Maui and Hawai‘i islands to transport sugar from the fields to the mills and docks.

Both Hawai‘i and the mainland United States suffered an economic depression during the 1880s, and King David Kalakaua plunged the monarchy in debt to the sugar planters. By 1890, nearly three quarters of all land in Hawai‘i was owned by foreign investors, the majority of it planted in sugar.

When Kalakaua’s sister, Liliuokalani took the throne in 1891 as queen, she sought to introduce a new constitution to regain power lost to the “Bayonet Constitution” of 1887, which increased authority of the government while reducing that of the monarchy.

American-born plantation owners believed they could only secure their business interests by establishing a new government and aligning with U.S. interests. Ultimately they prevailed in deposing the Hawaiian monarchy, which Queen Liluokalani reluctantly acquiesced to in order to avoid bloodshed. The Queen believed the U.S. government would, upon learning the facts, reinstate sovereign power. But her pleas went unheeded and in 1898 Hawai‘i was annexed as a U.S. territory.

In the early 20th century, sugar and pineapple were the main economic drivers, with rice coming in third among export crops. By 1934, 130,000 acres of sugar plantations yielded 900,000 tons of sugar, quadrupling the output of 30 years before.

Through World War II, labor disputes, and the transition to statehood in 1959, sugar held its sway. Only with the rise of tourism did sugar begin to topple from atop the economic pyramid. With tourism came real estate interests and rapid urbanization. Hotel and building jobs competed for workers, and the sugar plantations, now with union representation, struggled to compete. Ultimately, plantations sold off their land holdings for profit, as world sugar prices dropped and tariffs rose.

In the late 20th century plantations shut down, one by one, on O‘ahu, Maui and Hawai‘i islands. Hoping to double their diminishing profits, Kaua’i’s Gay & Robinson plantation launched a last gasp effort into sugar cane-based ethanol biofuel production, which proved unsuccessful. Large tracts of agricultural lands were leased to the seed corn industry, while others were used for urban expansion. HC&S, the final sugar operation to close, recently sold its 35,000+ acres of agricultural lands to Mahi Pono, a California-based entity which has vowed to increase diversified local food production.

Dr. Noa Kekuewa Lincoln’s extensive research shows that Hawaiians used sugar or kō, for a variety of essential purposes. It was chewed for quick energy and served as a “famine food,” in times of scarcity. It sweetened bitter remedies in the la‘au lapa‘au traditional healing practice utilizing medicinal plants. As a salve, it was applied to wounds to promote healing.

Raw cane was chewed to strengthen one’s teeth. Warmed wai kō (sugar water) was a remedy used to treat infants. Kō was also part of religious ceremonies and offerings. The Manulele variety was associated in the practice of hana aloha, to attract the attention of a distant person to induce them to fall in love.

Cane juice mixed with charred kukui nut shells was used to make ink for tattoos, perhaps because it helped heal the skin. Sugar cane leaves were woven into thatch for interior walls of the Hawaiian hale, or house.

Sugar cane blossoms were utilized in lei making, especially the lei haku, or head lei. The flowers were also used to line slopes for the holua (land sled) tracks, to make them slippery.

Dr. Lincoln’s ethno-botanical expertise is both scientific and anecdotal, and serves to inspire preservation of heirloom species to fill the void left in Hawaiian agriculture in the post-plantation era. 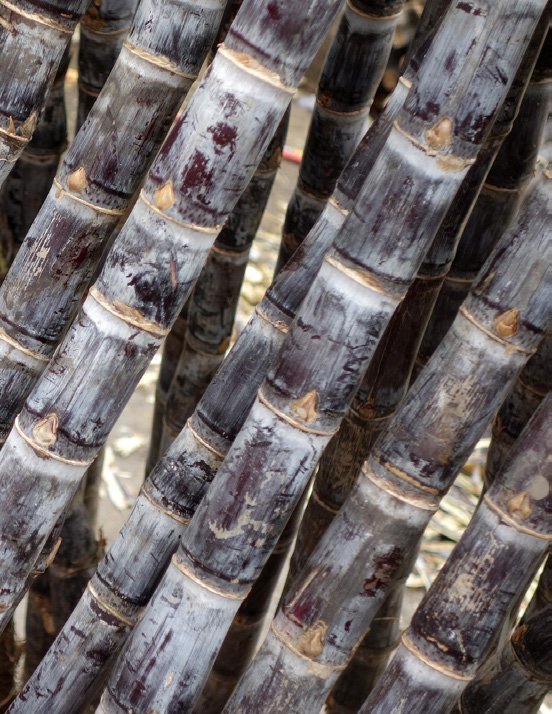 Fresh cane juice, however, contains complex sugars that provide the body with sustained energy and don’t leave behind toxins. Studies show that fresh cane juice, high in minerals and vitamins, has a number of healthful properties. It may improve digestion, possesses laxative properties, can help lower harmful cholesterol, strengthen the immune system, and help regulate blood sugars due to its low glycemic index. And, it tastes good!

Farmer’s Market shoppers on O‘ahu may have run into freshly squeezed cane juice drinks, thanks to the passionate efforts of self-described, “Sugarista,” Sourivahn Sivongxay of Hawaiian Sugarcane LLC. “Vahn,” for short, was born in Laos, is a sugar cane farmer’s daughter and farmer herself, restaurateur, entrepreneur and U.S. citizen, after her family took refuge in America.

“Never in my wild dream,” Vahn exclaims, did she expect, “to be making fruits, plants or serving juices or beverages for a business.” Her drinks have become so popular that she is looking to expand.

Kōloa Rum CEO Bob Gunter moved to Hawai‘i in the 1970s and worked for ten years on Lihue Plantation. There, he says, he became enamored with plantation life. After a stint with Kaua’i Electric, he moved to Maui, but was eventually lured back to Kaua’i to explore possibilities of designing a rum operation.

Ten years ago, Kōloa Rum launched, and now may be found in 27 states and four countries. “We use the phrase, ‘It all started here’,” says Gunter, noting that Kōloa was the site of the first successful sugar mill in Hawai‘i. They are in the process of moving their distillery into historic Kōloa Town, with a dozen acres to be planted in cane around the facility. By next year they will have exhausted the supply of nearly 200 tons of sugar purchased from HC&S before their closure in 2016.

“We wouldn’t be here without Dr. Noa Lincoln,” who helped them select specific varieties, said KōHana brand manager Kyle Reutner. Working in conjunction with UH-CTAHR, they took long-forgotten Hawaiian kō and have out-planted 38 acres, up from just a quarter-acre first grown in 2009.

“We equate the difference to when people first taste an heirloom tomato,” says Reutner. “When you have better starting material, you have a superior end product.” He adds that they strive for minimal processing, hand-harvest with machetes, and says their rum is comparable to an estate-produced fine wine. KōHana rums are found in Whole Foods, specialty liquor stores, and in fine restaurants and bars throughout Hawai‘i.

And thus, with a nod to Hawai‘i’s cultural past, the new era of sugar has just begun. [eHI] 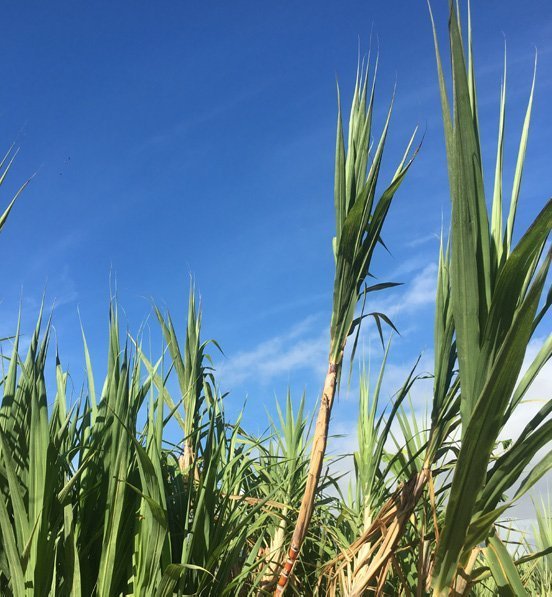