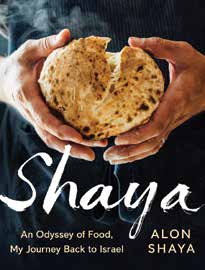 SHAYA: AN ODYSSEY OF FOOD, MY JOURNEY BACK TO ISRAEL
Size: 7.4 x 1.3 x 9.8 inches
Pages: 440 pages
ISBN: 978-0451494160
Author: Alon Shaya was born in Israel, raised in Philadelphia, and calls New Orleans his home. The three celebrated restaurants he started and ran as executive chef/partner–Do-menica, Pizza Domenica, and Shaya–reflect his culinary journey and love of Israeli and Italian cuisine. In 2017, Alon Shaya formed Pomegranate Hospitality to foster opportuni-ties for colleagues, partners, and friends in a comfortable and professional environment where cultural differences are celebrated. Alon Shaya has been nominated for five James Beard Awards. In 2015 he was named “Best Chef, South” while at Domenica, and a year lat-er, ‘Shaya’ was hailed as “Best New Restaurant”. He was called one of the “50 People Who Are Changing the South” by Southern Living magazine, and by The Forward as one of the “50 Most Influential Jews in America”, published by Alfred A. Knopf, and with Pomegranate Hospitality he is opening two new restaurants: Saba in New Orleans and Safta in Denver.

Alon Shaya’s is no ordinary cookbook. It is a memoir of a culinary sensibility that begins in Israel and wends its way from the U.S.A. (Philadelphia) to Italy (Milan and Bergamo), back to Israel (Jerusalem) and comes together in the American South, in the heart of New Orle-ans. It’s a book that tells of how food saved the author’s life and how, through a circuitous path of (cooking) twists and (life-affirming) turns the author’s celebrated cuisine–food of his native Israel with a creole New Orleans kick came to be, along with his award-winning New Orleans restaurants: Shaya, Domenica, and Pizza Domenica, ranked by Esquire, Bon Appétit, and others as the best new restaurants in the United States.

These are stories of place, of people, and of the food that connects them, a memoir of one man’s culinary sensibility, with food as the continuum throughout his journey–guiding his personal and professional decisions, punctuating every memory, choice, every turning point in his life. Interspersed with glorious full-color photographs and illustrations that follow the course of all the flavors Shaya has tried, places he’s traveled, things he’s experienced, lessons he’s learned–more than one hundred recipes–from Roasted Chicken with Harissa to Speckled Trout with Tahini and Pine Nuts; Crab Cakes with Preserved Lemon Aioli; Roast-ed Cast-Iron Ribeye; Marinated Soft Cheese with Herbs and Spices; Buttermilk Biscuits; and Whole Roasted Cauliflower with Whipped Feta.