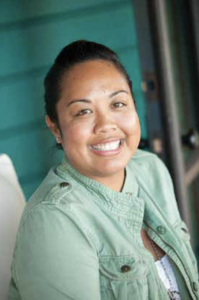 INTRODUCTION: Publisher Dania Novack-Katz recently asked Pomai Weigert to write about her personal experience with our food system in Hawaii. Dania is tired of hearing that we import 90% of our food with no focus on inspiration or progress update. Here, Pomai, who was recently named one of the most important women in Hawaii Agriculture by Forbes magazine, shares her insight and point of view.

When I was asked to write a personal essay regarding my perspective on the current food systems scene in Hawaii, I felt excited for the opportunity but also a tad bit vulnerable. Strengthening local food security has been a greater part of my life’s work and there are so many routes I could take this conversation.

This assignment had me recounting my whole career. All the connections I’ve made and rely on, all that has happened in the world and in Hawaii since I started working in agri-tourism in 2008… It’s only been 10 years but it feels like forever.

It made me recall a memory that often centers me, from when I was a young student at Maui Community College still trying to figure out what to do with my life. I took a class back then from Kahu Lyons Naone on the Hawaiian Moon Calendar. As we were studying worksheets and learning the names and phases of the moon, he said, “You can use these charts to predict and guide you, but the truth is in the sky. Don’t always believe what’s on paper. Believe what you see with your own eyes.”

I think about those words all the time. They guided me as I embarked on my career as a researcher and agri-business consultant for Hawaii. Every time I step on to a farm or ranch, teach a class, visit a place and meet with people- I think about what he said. I have seen many things in my line of work, things that will never be put on paper, things that can never be put on paper. Things that never get counted or caught, things that go unseen, unspoken, and undiscovered. This is the “dark data,” the data that’s gone unrecorded but is happening every day. When it comes to statistics, I’ve learned that what’s on paper is not always what’s on point. I’ve gathered my own data, written my own reports and am my own source. When they ask me how I know, I tell them it’s what I’ve seen.

First, agriculture is a touchy subject in Hawaii — consider that a fact. There are many factors that contribute to this; differences in culture, class, history, generation, business, technology and value systems to name a few. Historically, Hawaii is a society that has been broken down and re-built on the back of agriculture over and over again. Like nature, things come and go in cycles. We are currently in a re-grow cycle. We have crossed over from a plantation template and are in a new era of agriculture and food.

You’ve probably heard most of the food production statistics we have, they haven’t changed much in 10 years. The buzz words still ring to the tune of 90% imports, food insecurity, “average age of the farmer is 60-something years old,” Big Ag vs. Small Ag. I know these by heart, but I don’t believe them anymore. I’ve seen different. I know different.

Today, the people that grow our local food are from all walks of life; all ages, backgrounds and belief systems, much the way many of our ancestors were when they came to Hawaii in the plantation days, looking for opportunity, promising to work hard and filled with hopes and dreams. It wasn’t easy and it didn’t come without sacrifice. Those things are still the same, but farming in Hawaii no longer consists of working on a plantation. Today, farming in Hawaii is a chosen lifestyle. There are new buzz words now: beginning farmer, aina based education, farm to table, agri-tourism, sustainability, locavore. I know these by heart too, and I believe them. I have seen them. I know them.

Our focus on locally grown food has also shifted; it’s no longer about what we don’t have, it’s about what we do. Communities across the state are adapting to different environments, people, and resources. They’re rallying efforts to grow food in ways that are bold & collaborative. They’re developing partnerships, challenging paradigms and transforming leadership. Drawing lines and picking sides is no longer the greatest priority. Succession and survival are, and not just physically but culturally, spiritually and emotionally. Growing food for Hawaii and buying food from Hawaii is a way of life many of us believe in—by actually doing it and supporting it. This isn’t just about food; it’s about life.

Over the last 10 years, new, non-traditional plans of action have been designed to meet our demand for food. Statewide programs like GoFarm Hawaii were formed specifically to generate a new generation of ag-producers that support Hawaii’s Sustainable Food Systems. Since 2012 they have trained 200+ new farmers, produced over 45K pounds of food each year, and fed roughly 500 families in Hawaii in 2017. They are not the only program doing this.

Aina based education models have also carved out a space for themselves in Hawaii’s food movement scene. Land and cultural stewardship have become one of the regenerative avenues many Hawaii Farmers and Native Hawaiians have taken to by incorporating cultural practices and values into their farm models and succession plans. We’re reviving native food production and creating stronger pipelines to distribute these staples to native people & local residents on every island. Each week, places like Waipa Foundation produce up to 1000+ lbs. of food and feed up to 300 families on Kaua’i every Thursday. I have yet to visit an ahupua’a in Hawaii that doesn’t produce some type of native staple for themselves and their region.

Women are also changing the game in the food systems industry. Nationally, women make up 40% of the farming community, and I suspect it’s at least that much here in Hawaii. Women have always been in agriculture, they just haven’t always been seen. They are the unsung heroes and boss ladies in this business and they are no longer “behind the scenes.” They bring a different energy, vision and vitality to an industry that has been male dominated for generations.

New niche networks in farming are sprouting up as we speak including veterans, retirees, and people with multi-disciplinary backgrounds. Not to mention all the “supporting” roles the food system encompasses: distributors, aggregators, retailers, restaurants, chefs, friends, family and more. Farming food is no longer the sole responsibility of the farmer, but has crept into the consciousness of the people they feed. Everyone plays a part whether they grow, sell, buy or eat.

These are the circumstances and this is the glimpse I want you to see, so that you know what is here and what is coming, so you can prepare, strategize and be brave. It is with my aloha that I share these words with you so that you may do good work, make good choices and prevail.

Pomai Weigert was born and raised in Hawaii. She is an educated world traveler, a global & local agri-business researcher and consultant, a local food rocker and an avid farm lover. She was recently named one of Hawaii’s Top 5 Women in Food by Forbes Magazine and was an inaugural Tedx Speaker for Maui. She has worked with many of Hawaii’s top agriculture and tourism outlets & organizations, shared insight, led training in both sectors and currently helps pioneer healthy food systems through the University of Hawaii.