Guests at Honolulu’s newest fine eatery, Senia, can expect to be dazzled before even taking a bite. Restaurant co-owners, chef Chris Kajioka and chef Anthony Rush have not only spent months crafting transcendent menu items but also amassed a collection of custom ceramics created especially to show off their edible art. Each dish promises to be a feast for the eyes as well as the palate.

“I’m really into plates,” Kajioka admits. “I spend a lot of time with ceramicists. It makes a big a difference.” Kajioka is one of several Hawai‘i chefs who feel that the plate is as important as the ingredients it holds, and that handmade ceramics are worth the investment.

In his former post at Vintage Cave, Kajioka essentially had a blank check with which to stock his kitchen. He contracted eight artists to supply ornate platters that resembled slabs of old-growth wood, glass sea urchins, and round dinosaur eggs. At $295 a seat, guests expected this level of artistry and refinement.

Now at his own more casual restaurant, Kajioka has toned down, but not much. He hired four ceramicists, including Jono Pandolfi, a cult favorite in the culinary world. Pandolfi teaches pottery at Parsons School of Design and supplies tableware to top kitchens across the country, including Tosca, wd-50, and Eleven Madison Park. Pandolfi’s pottery has sophisticated simplicity: clean lines, bold glazes, and rustic finishes.

Kajioka also gravitates towards simplicity, which allows unexpected beauty to emerge. “With food, fewer items are more impactful,” he says. “It goes the same way with plates. It could be really simple, with only one detail. Maybe only one person sees it.”

More than one person will certainly notice when the Périgord truffle tureen comes out of the kitchen at Senia. It’s an attention grabber. Kajioka commissioned numerous special dishes for his twelve-seat chef’s counter, including this stunning black tureen brushed in gold. Its creator, Christina Liu, drew inspiration from the whimsical Chelsea porcelain tureens of the 18th century, which paid homage to popular fruits and vegetables. 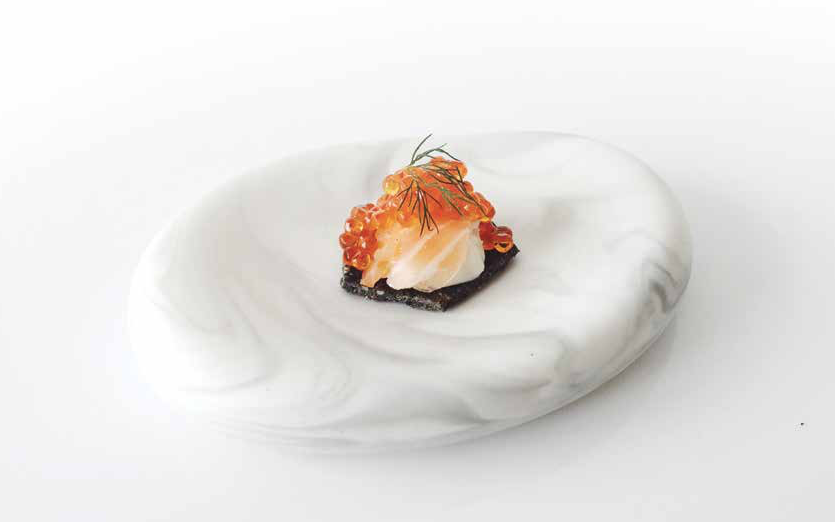 Liu explains: “By immortalizing the ultimate luxury food item in clay—truffles can be, pound for pound, more expensive than pure gold—I wanted this tureen to reflect on the decadence and opulence of the grand dinners in which prized tureens would often make an appearance.” To mimic the truffle’s earthy texture, she perfected a crackled glaze that most potters avoid. The black shell opens to a hollow bowl, which Liu finished with gold. It’s the perfect receptacle for a genuine Périgord truffle.

Liu created the three custom vessels for Senia: the tureen, a deep, compact bowl with a wide rim reminiscent of Saturn’s rings, and a dreamy, marble-like dish she calls the “pebble pillow.” For the latter, Liu used a marble-like, self-glazing clay. She swirled white and gray clays together to create something that resembles wave-polished stone. Liu’s partnership with Kajioka began at Vintage Cave, her first restaurant commission. She took an imaginative approach there too, designing a dish after the lush curves of O‘ahu’s Ko‘olau mountain range. The successful collaboration convinced her to pursue a career in functional ceramics.

“Tableware should serve as more than just a blank canvas for the art of food,” says Liu. “The pieces I create are not merely utilitarian plates or bowls. They are intricate objects that invoke a sense of luxury, to be admired and brought onto the dining table only for extraordinary meals.” And, as anyone who has sampled Kajioka’s cooking can attest, extraordinary is no overstatement.

“He’s always been so supportive of my art,” says Liu of Kajioka. “I never feel like a piece that I’ve created is fully complete until I see his food plated on it.”

A similar collaboration recently took place in Waikapu, Maui, where potters Miri Sunkel and Karina Subijana of Altar Ceramics worked day and night to finish a custom order for the Mill House restaurant. Executive chef Jeff Scheer wanted special plateware for his first annual Maui Chefs Invitational. The women of Altar Ceramics were thrilled to get the job. They fired up a kiln within walking distance of the restaurant and got to work hand-throwing 600 clay dishes.

Subijana began working with clay after having a child two years ago. It grounded her and gave her a creative outlet. But, she says, “It turns out I’m a production potter. I naturally think in terms of collections or groups.” Before long, her “hobby” had taken over every ledge in her house. So she invited her friend and fellow ceramicist, Sunkel, to partner in a business. 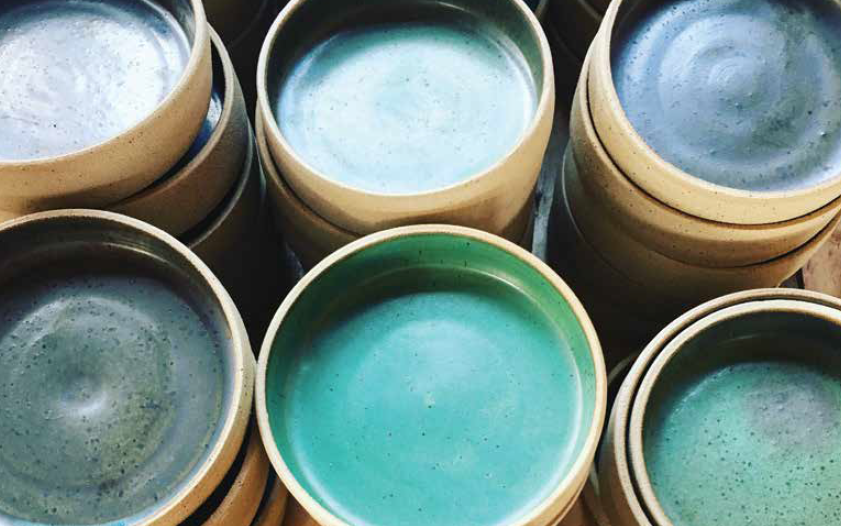 The pair brings a spiritual sensibility to their studio work. “The thing about ceramics,” says Subijana, “is that you have to cultivate a sense of trust and surrender.” She and Sunkel laugh over the plates they’ve lost through trial and error. Their goal with Altar Ceramics is to rekindle a sense of ritual, and bring intentionality to everyday meals. They aim to create aesthetically pleasing pieces that also radiate a sense of wellbeing. “Ceramics is silica, a crystal,” says Subijana. “It’s going to take on the vibration of the person who makes it.” If that sounds too far out, she says, “Think of a well-loved mug, the energy it holds. You can sense that.”

For the Mill House, she and Sunkel produced pewter and aquamarine dishes, creamy yellow bowls, and triangular dessert plates. They used clay laced with iron to create an attractive speckled saucer.

Scheer is delighted with the results. He helped design the pieces to his specifications, so that they’d best fit his portion sizes and sit nicely on the table. He wanted shallow bowls that could hold broth or rich sauces while allowing the other ingredients to remain crisp. “I could put the exact same ingredients on a regular dish and it wouldn’t taste as good,” he says. “I love bowls. They force you to eat everything together. I have components that are extremely salty or acidic and if you taste them separately, you’re not going to understand the dish.”

Handmade tableware perfectly complements Scheer’s farm-totable philosophy. Much of the restaurant’s organic produce grows onsite. The wood for the tables was sourced from nearby trees. It makes sense that Scheer would search out local ceramicists. Subijana and Sunkel are just two of several he’s worked with. Ideally, he’d like to see a full-time ceramics studio and shop on the property. “It’s just cool,” he says. “It’s what this whole project is about: making things from scratch.” 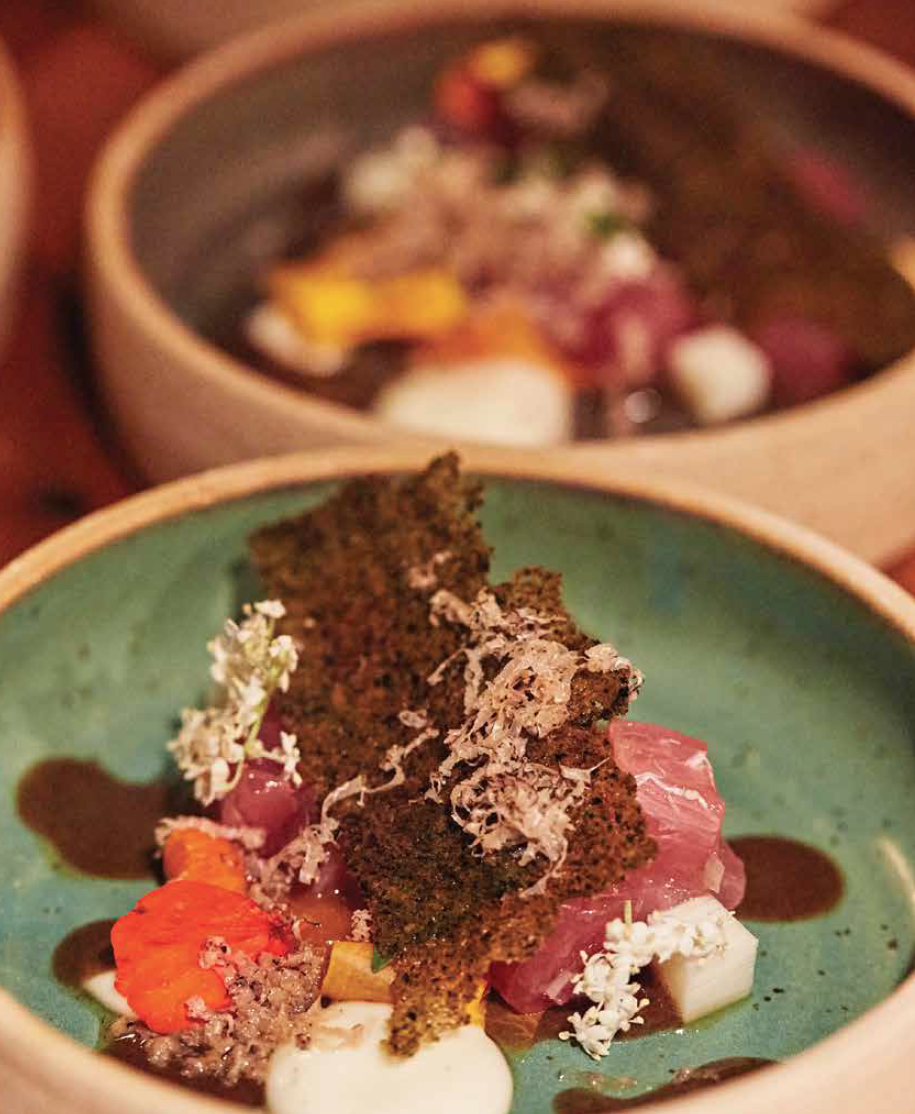 Upscale restaurants aren’t the only ones supporting the clay arts. On the casual end of the dining spectrum, Café Ono has an earthy, eclectic atmosphere. Set amidst the Volcano Garden Arts Gallery on the Big Island, the café is a serene spot to grab a vegetarian lunch. Owner Ira Ono’s commitment to handcrafted plates and bowls elevates the experience.

A prolific artist himself, Ono came to Hawai‘i in 1968. “I left a fabulous avant garde life in NYC,” he says. He did his best to recreate it on Maui, founding the Maui Crafts Guild, the Hui No‘eau’s ceramics program, and the annual Art of Trash exhibit before moving to the Big Island. Fourteen years ago, he purchased a 1908 cabin in Volcano and lovingly transformed it into an art gallery and restaurant. At Volcano Garden Arts, he says, “the goal is everywhere you look, you’ll see beauty.”

He serves Kona coffee in hefty, hand-thrown mugs stamped with the café’s insignia. Local ceramicist Ron Hatani supplies the kitchen with handcrafted plates, bowls, and tea sets. Hatani lives tucked away down a dirt road nearby, and splits his time between Volcano and Japan. His main exposure as an artist is during the town’s annual ceramics sale and here at the café. His color palette recalls a sandy tropical beach in the rain, speckled taupe and streaks of grey melt into muted turquoise. The collection provides an elegant backdrop for Ono’s homespun food. The mushroom barley soup with flecks of hijiki seaweed looks especially inviting cradled in one of Hatani’s bowls.

“Ceramics is an expensive hobby here in Hawai‘i,” says Ono. “Our utilities are the highest in the nation and artists have to pay shipping for clay. When you see a teacup or bowl for $20, they’re not making any money. That’s a labor of love.” But like Scheer and Kajioka, he thinks the extra cost for custom pottery pays off. “Everything tastes better in handmade pieces.”