The poet moves through light and shadow between spires of green. He steps gingerly on a steep, muddy path over fallen fronds and leaves. He has come to fetch a small potted palm from a protected shelf which he carries back to his house hidden in a palm forest on Maui’s north shore.

It’s been raining hard leaving the narrow path dangerously slick. Even in hiking shoes I have to steady my own step, following behind the poet four decades my senior. “Be careful,” I caution, watching him advance along the path, somewhat overdressed for the tropical climate in a grey flannel long sleeved shirt, navy blue turtleneck, drab olive vest and denim jeans. “Oh, I’ve been on these trails a few times,” the poet answers buoyantly, pushing against a walking stick still holding the potted plant.

The air is cool but humid after a band of early winter rain has doused the coast leaving the poet’s forest resplendent in green pinnate fronds, orange crown shafts, clusters of yellow and red seeds. As we walk toward the house, without turning back, the poet says in a strong, clear voice, “They ask me, ‘Why do you love palms?’” He pauses briefly, then asks no one in particular, “Why do you love your girlfriend?”

A poet rewrites a valley’s history

The house appears from nowhere out of a dense pocket of green, with only the corner of the tiled roof visible, looking like a Japanese country home. We are joined by the poet’s guardian and companion, a stocky legged ruddy orange chow with a pink and black muzzle who woofs protectively at the approaching stranger.

The poet is W.S. Merwin, one of America’s most celebrated 20th century writers. Author of more than 60 works of poetry, prose and translations,as well as U.S. poet laureate (2010), Merwin has been creating this palm forest with his wife Paula since the late 1970s. This is not only their personal retreat and a world-class palm collection, but now in partnership with the Hawaiian Islands Land Trust (HILT), it’s a protected conservation resource that will endure in perpetuity. 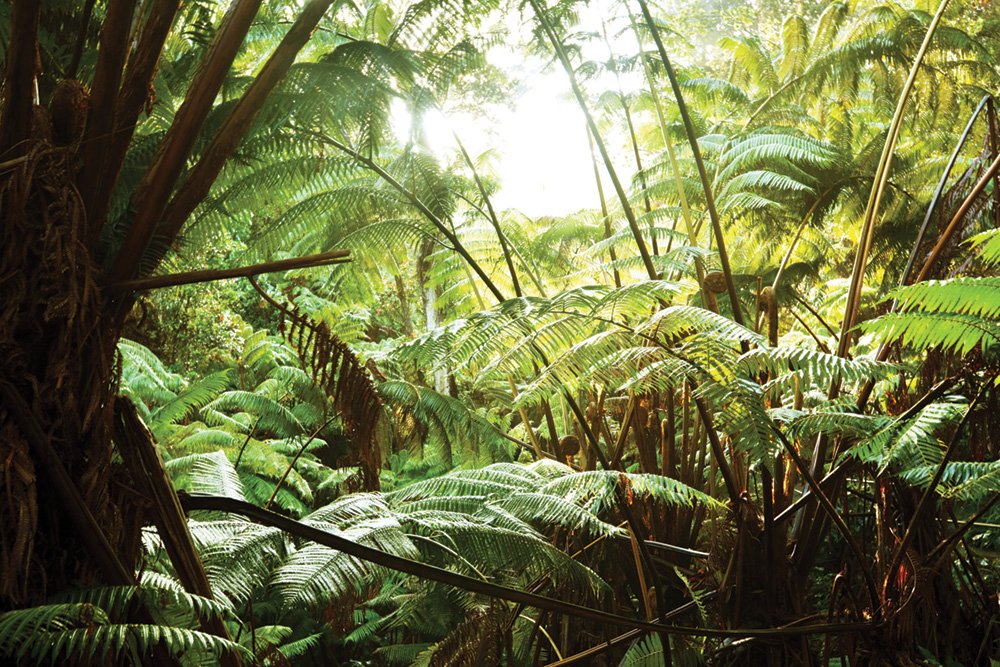 Merwin, who came to Hawai‘i in 1976, began his palm collection the following year. Soon after arriving he found a sloping hillside degraded from years of destructive pineapple farming. Although the soil was in no shape to grow much of anything, Merwin started planting Casuarina (ironwood) trees the day he bought the property. Those trees reinvigorated the battered earth and 30 years later, when the trees had to be removed due to termite infestation, Merwin found they left behind 18 inches of rich, black topsoil.

“The thing is, if you give it life in some particular place, the life wants to be there and it wants to grow. Now the life is all the way down the slopes,” Merwin says, looking out from his lanai on the jungle he grew.

Before coming to Hawai‘i, Merwin lived in the south of France where he first read about soil restoration. At the time he never expected to own land but told himself, “if I do, I’d like to have ruined land and see if I can restore it.”

Together Merwin and Paula have turned the once barren hardpan into a vibrant mosaic and canopy of life humming with bird songs and rustling fronds.

“The one thing that survived if I gave it a little bit of seaweed, manure and compost to begin with,” Merwin recalls, “was the Hawaiian palms – the Pritchardia.” Merwin gathered seeds from collectors in Hawai‘i and gradually built up his collection with palms from around the world. Many of his trees, like the red lemur palm (Lemurophoenix halleuxii) are rare and endangered in the wild.

For nearly three decades Merwin and Paula nurtured their collection alone. Paula says, “For all these years we didn’t have any help at all in the garden…We just had our heads down…working, weeding, planting, collecting. Then about five or six years ago we both looked up and saw what had happened — we were thrilled. We still are — it’s kind of miraculous.”

Today, the forest of over 2,700 palms (over 800 horticultural varieties, 407 species, 128 genera), gets help from a small, dedicated groundskeeping crew, but the Merwins are out amongst their trees daily, pruning and planting, mixing in organic fertilizer or scattering half-rotted woodchip mulch around the trees.

In 2010 the collection was institutionalized as The Merwin Conservancy, a non-profit organization dedicated to advancing and preserving forever “the literary legacy, the palm tree collection and the home of W.S. Merwin.” Besides caring for the forest itself, the Conservancy says it was established, in part, to perpetuate Merwin’s works and values in a public forum through research, education and outreach.

Three years later Merwin’s palms were mapped, identified and tagged in partnership with the Kaua‘i-based National Tropical Botanical Garden and Dr. John Dransfield, one of the world’s leading palm authorities.

Explaining the collection’s scientific and conservation value Dransfield says, “This wonderful garden represents one of the richest collections of palms amassed by a private individual. What is so unusual and valuable is the extraordinarily natural appearance of many of the palms, which are growing in rain forest conditions of mixed shade very much as they would in their place of origin.” 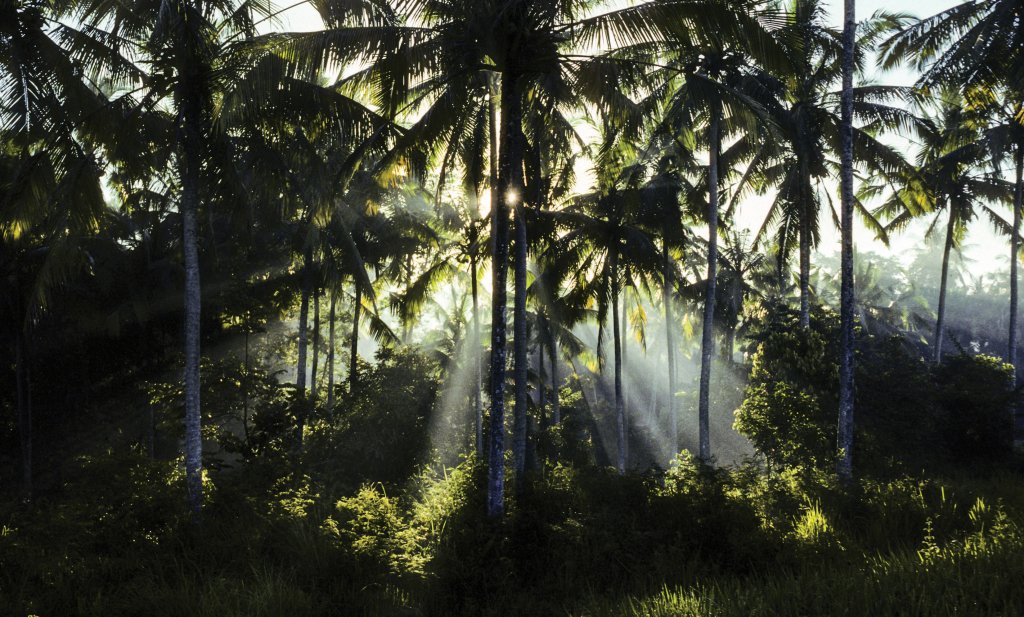 Last October The Conservancy established a perpetual conservation easement with HILT, which will monitor and partner with The Conservancy to help with long-term protection and management of the property.

Jason Denhart, executive director of The Merwin Conservancy, says the partnership with HILT will ensure that what he called “Maui’s version of Walden Pond” will never be threatened by future development.

Ted Clement, HILT’s executive director, points out the large concentration of biological diversity on the 19-acre site, saying that “the fact that one of the great environmental poets of our time really walks the walk and puts a real perpetual conservation easement on his palm forest, that’s significant for the national land conservation movement. It shows how significant it is when great minds realize the importance of land conservation and do it on their own land.”

Reciting Merwin’s oft-cited quote “On the last day of the world I would want to plant a tree,” Clement says Merwin embodies the true spirit of a strong conservation ethic. “That quote for me…was always about at the end of the day, no matter how tough things are, even if your world is coming to an end, you always fight for life. You always take actions that promote life… even in the face of incredible odds you just keep fighting for life, you plant another tree even in the face of the final days.”

For Merwin and Paula, each day spent at home among the trees they’ve grown and the soil they’ve restored, is a treasure no matter the weather. No matter how hot, how rainy, or how muddy the path, every day is a good day.

In reflection Merwin says, “This is it. This is the once… I feel so lucky to be here with Paula and this garden.”

In January the Hawaiian Islands Land Trust presented W.S. Merwin with its 2015 Champion of the Land Conservation Award in recognition of his exceptional commitment to land conservation.

What is a Garden?

“What is a Garden?” from THE RIVER SOUND: POEMS by W.S. Merwin, copyright © 1999 by
W.S. Merwin. Used by permission of Alfred A. Knopf, an imprint of the Knopf Doubleday Publishing Group, a division of Penguin Random House LLC. All rights reserved.