Rooted in Culture, Guided by the Stars

Surrounded by more than 14,000 acres of protected land in East Molokai, stretching from cloud-draped mountain- tops to the shorelines of the blue Pacific, Pu`u O Hoku Ranch is emblematic of resilience and connection between past and present, with a clear vision to the future.

The area has been a cattle ranch for more than 100 years, but the place name, Pu`u O Hoku, or Hill of the Stars pre-dates that.

Legend has it, as told by Harriet Ne in “Tales of Moloka`i, that centuries ago a man named Nakoa from Maui was directed by a vivid dream and celestial signs to paddle his canoe across the Pailolo Channel, seeking relief from the persecution of an angry chief. Upon landing, he climbed a series of hills until, exhausted, he lay down and gazed at the stars, which appeared so vividly that he felt they were close enough to touch. 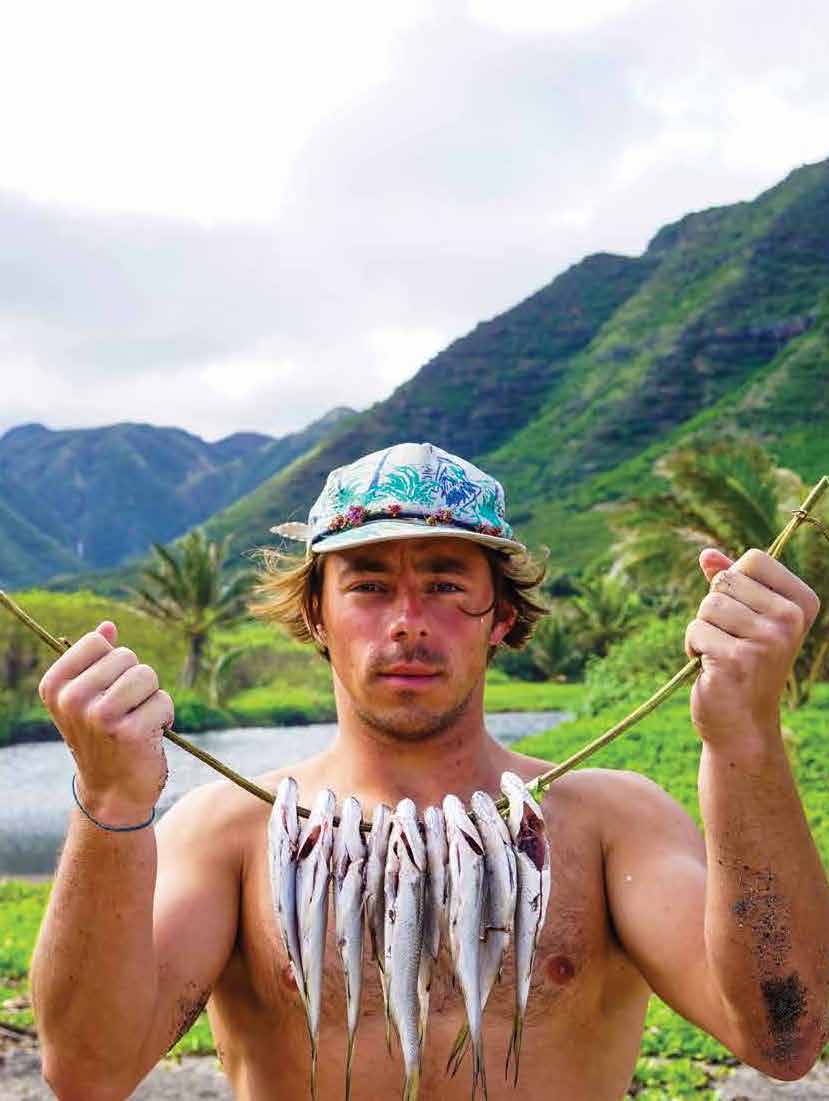 The next day he awoke and met an esteemed elder, Lanikaula, who tended the sacred kukui grove. Lanikaula told Nakoa that he could take refuge and it was the will of the Gods that he would always be safe at Pu`u O Hoku.

Fast forward to modern day, where the fast pace of urban life elsewhere is the polar opposite to that of East Moloka`i. Pu`u O Hoku Ranch still tends some cattle, with dedicated efforts focusing on niche and value-added products, including organic honey, dried apple bananas, awa—one of many Polynesian-introduced “canoe plants,” and a Lodge and retreat center featuring farm to table meals from their pastures, orchards and vegetable gardens.

Family owned for the past 30 years, film-maker and conservationist Lavinia Currier has overseen the evolution of the vast, verdant lands while raising her children. Currier first became aware of the ranch in the mid-1980s while working with The Nature Conservancy (TNC). She implored TNC to acquire Pu`u O Hoku after learning that then-owner George Murphy was courting Japanese developers interested in developing golf courses. When TNC declined, Currier stepped in and made the purchase herself, more intent on the purpose of conservation than operating a working ranch.

Currier’s son Galen McCleary is sort of an “`ohana leader” to the ranch. After local schooling at Kilohana Elementary and Punahou, he studied at Stanford before returning to Hawaii to launch a business with three Punahou classmates. BananBowls took Oahu by storm, based upon a dairy-free frozen confection made from local bananas. Now a thriving Oahu favorite, Banan has a food truck, three brick and mortar stores, and will be launching a pop-up store in Japan this summer. McCleary says Banan is now the largest consumer of local bananas, surpassing Safeway, at 3,000 pounds weekly.

McCleary is currently based in San Francisco and oversees Food Sourcing for Patagonia Provisions. He recently spoke at the Re- Gen18 conference, sharing his perspective on creating regenerative supply chains in agriculture and fishing. He expects to return home to Pu`u O Hoku in time, where he appreciates the slower pace of life. “There is an inherent beauty of being there,” he muses, “like a throwback to older Hawaii.” 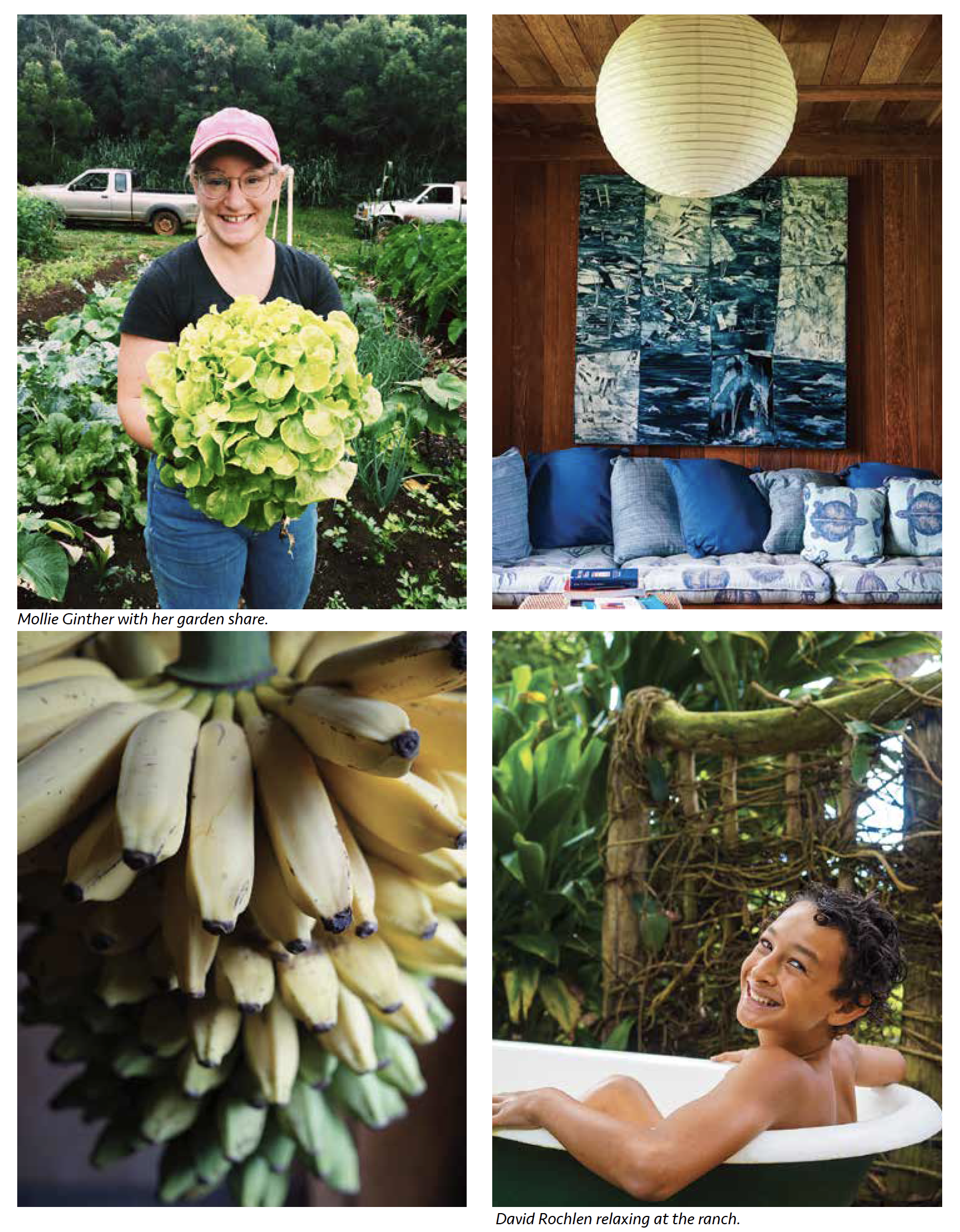 Bananas also emerged as one of the trademark products from the ranch. An hour by car from Kaunakakai town and harbor, getting food to market or shipping is a significant challenge. Thus, mangoes and papayas, while abundant and raised organically and bio-dynamically, did not prove to be economically viable. But a ranch favorite, super-sweet apple bananas, sliced lengthwise and dried to create a chewy, nutritious confection, premiered at the 2017 Made in Maui County Festival and completely sold out.

Yet, the geographic isolation of East Molokai is also a unique advantage, as apparent from a recent, rare USDA organic certification for Pu`u O Hoku honey. Given the proliferation of agricultural pesticides, less than a dozen such US operations have been similarly certified.

Mark House, with 20 years of organic farming experience in upstate New York and California manages the vegetable gardens and 50 bee hives. He views the bees as a unifying part of the ranch, which he views as a pollinator’s sanctuary.

House recounted that Molokai was historically renowned for honey production, setting a record with a half million pounds produced in the 1920s, mainly from abundant kiawe tree blossoms. It is illegal to import bees to Molokai, says House, and thus there is a natural biodiversity in the bees found few other places.

He developed techniques for capturing wild swarms and bringing the colonies to strategic areas in their gardens and pastures. Beyond producing honey, “the bees provide invaluable services to the gardens and ranch overall,” says House. “They are also an indicator of the overall health of the area,” he noted, adding that Molokai is free from varroa mites and other pests and diseases that attack apiary operations elsewhere. 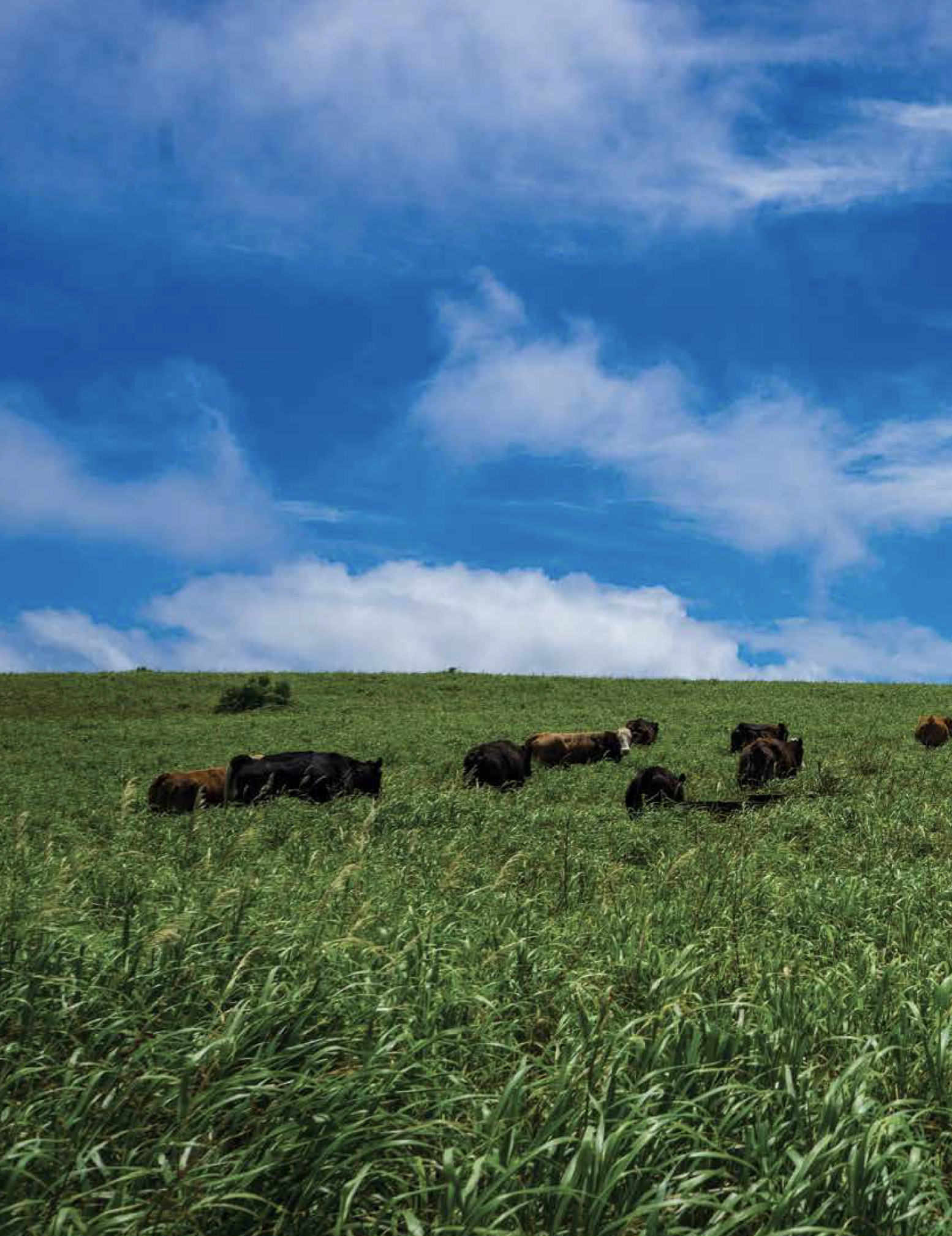 With an understanding that many people are seeking uncontaminated, high quality foods, Pu`u O Hoku honey was tested and found to be among the purest anywhere, free from any of 150 chemical contaminants found in other honeys, as attested by FDA surveys. The light, delicate flavor of the honey has helped it become a favorite in Maui health food stores where it is sold.

The top cash crop on the ranch, surprisingly, is one of the original “canoe plants” brought by original Polynesian voyagers who arrived in Hawaii. `Awa (known as kava or kava-kava in the South Pacific islands) has a long cultural history of medicinal and ceremonial use, as a soothing, somewhat bitter beverage. It is enjoying a bit of a return to mainstream usage, with `awa bars surfacing throughout the islands.

Keoki Coelho worked on the ranch for two summers while in high school, as part of the Alu Like program. After a stint in the Navy, he returned, and was part of a chipping crew clearing areas for cultivation and making mulch. Former ranch manager Jack Spruance hired him to take charge of the `awa operation. 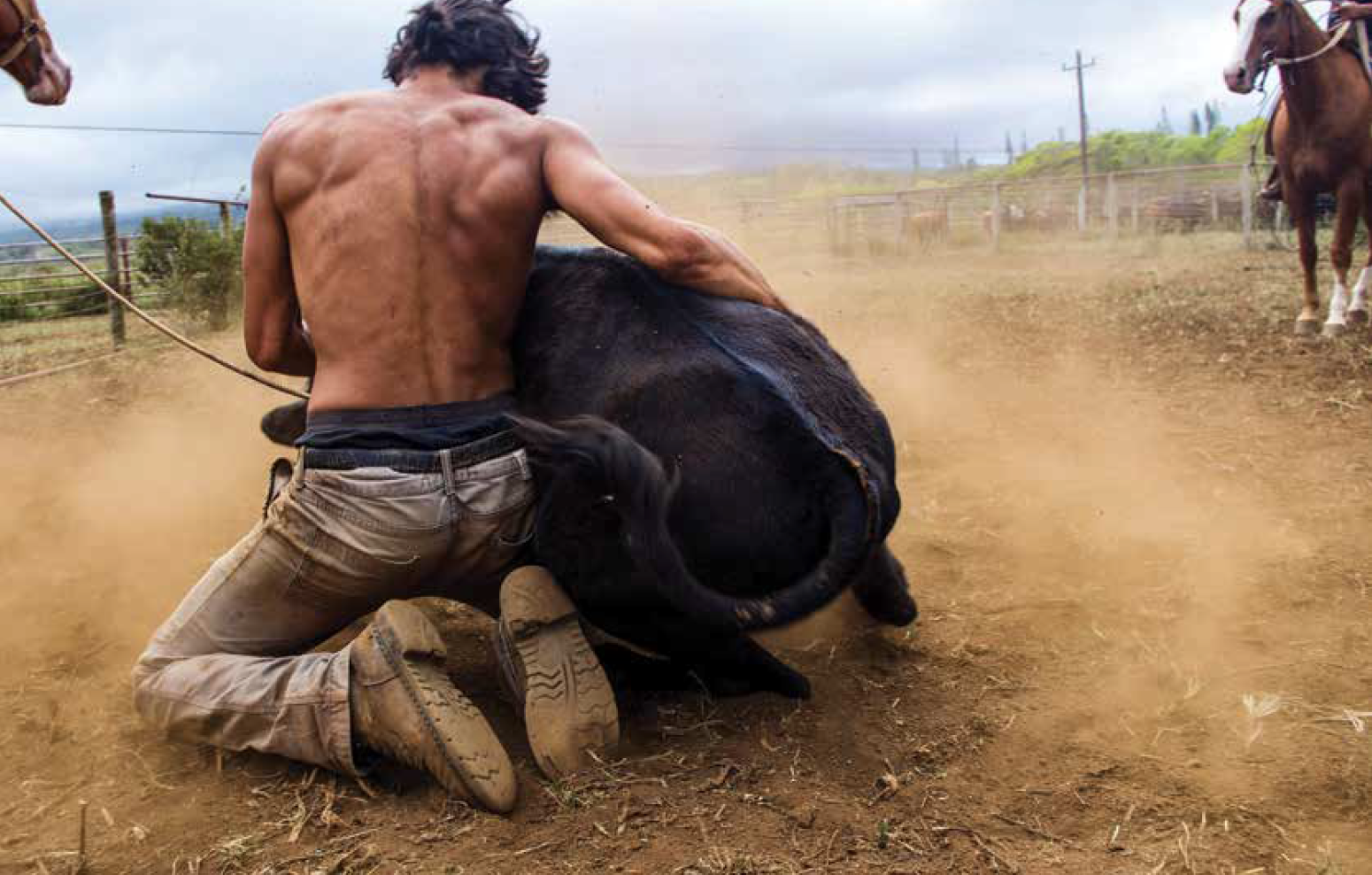 “We have about 15 strains, and most are native to Hawaii,” says Coelho. “I learned from Ed Johnson and Uncle Jerry Konanui, and I’m still learning, sometimes through trial and error.”

The plant can take four years to mature, growing to twelve feet or taller. Coelho uses a backhoe to unearth the roots and corm, cutting off roots with a machete. The root is pressure washed, run through a grinder, then frozen for two days before being blended in a Hobart mixer in the ranch’s certified kitchen. Coelho weighs the product and mixes in just enough of the `awa stump to add flavor. The final product is frozen and shipped overnight by FedEx.

“We have 1,000 plants in the ground right now,” the Molokai native shares, “and many more cuttings in the nursery waiting to plant around December,” to take advantage of the rainy season. He harvests and markets 150 pounds or more weekly, which finds its way to Diamond Head Health Collective, WaiWai Collective and Banan on Oahu, and even to the West Coast. The majority of customers buy for personal or ceremonial use, not commercial.

“I feel really blessed to be working here, doing something that is not just making money but fits into the culture,” he says. “I love my job.”

Seeking to respect the cultural and ecological connection to the land, Currier consulted Auntie Harriet Ne about the sacred Kanikaula kukui grove, that of legend. “The site was degraded by years of drought and cattle damage,” she said. “I asked Auntie Harriet about what some called the Curse of Kanikaula,” that no endeavors on the land would work out favorably.

“She told me it’s not a curse, but a responsibility. She said, ‘you must do the right thing.’” 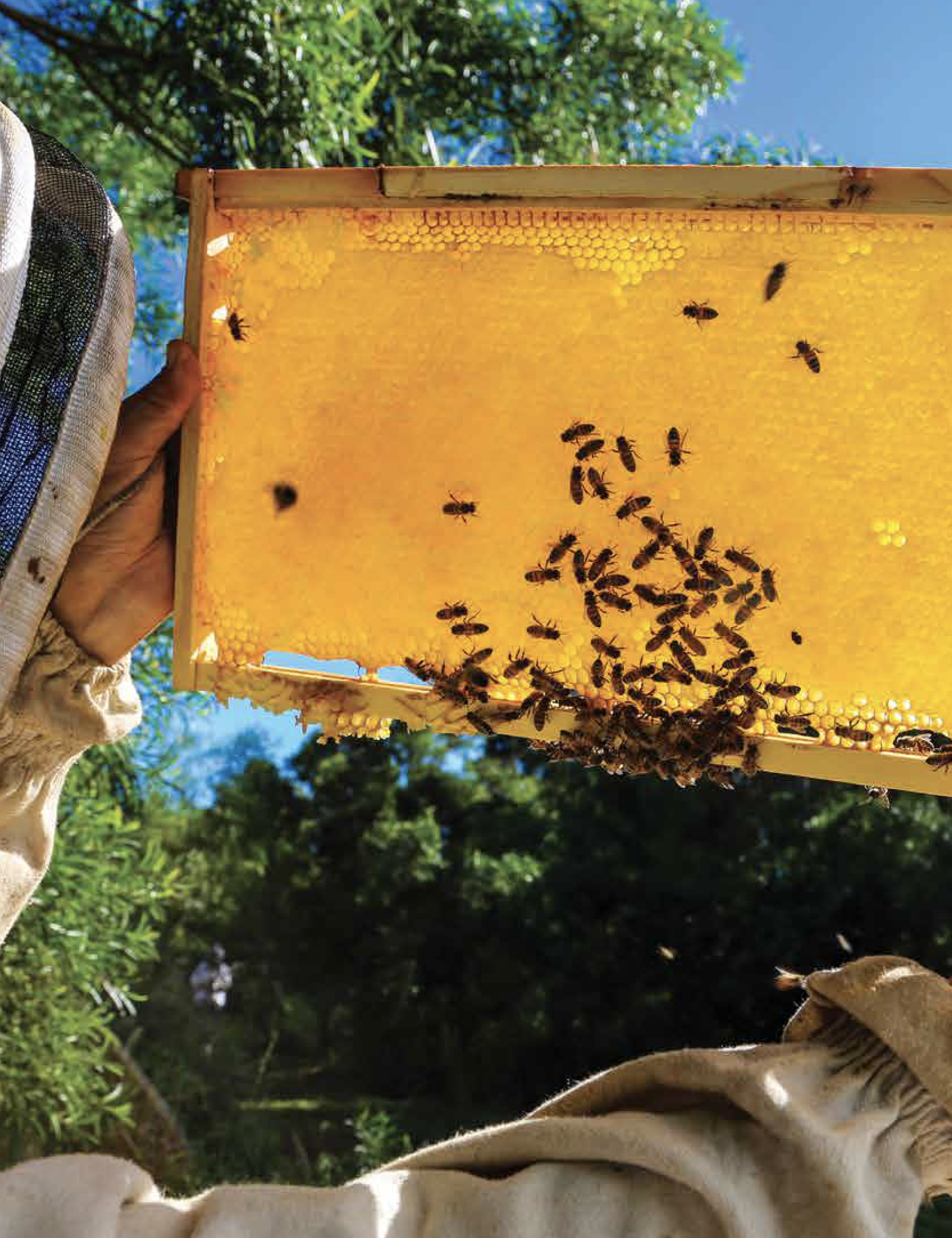 Currier continued to work with la`au lapa`au herbalists Auntie Marie Place, and more recently Bobbie Akane, to restore the site. In recent years the site has hosted the Ka Hula Piko festival, celebrating the indigenous Hawaiian dance form and the elemental roots from which it was born.

Currier has continued to honor the integrity of the land, natural resources and culture, planting endemics to foster biodiversity, and creating a safe haven for the Hawaiian Nene goose. In 2008 she quietly dedicated a 2,800-acre conservation easement to the Maui Coastal Land Trust, including more than 3 miles of coastline.

Kanaloa’s Garden hosts school groups to teach about canoe plants, and hosts many unique varieties, such as the manini, or variegated banana. He noted that restaurateur Ed Kenney approached him after he spoke of the high nutritional value of Hawaiian bananas at a Hawaiian Conservation Congress presentation a few years ago. Kenney offered to buy all he had and continues to feature them at his Oahu eateries.

“We must adapt,” Currier states, “including to influences such as climate change. We must be regenerative to the land.” She notes that Molokai has always been sensitive to food security, and that the ranch can play a significant role in addressing it.

“We envision a regenerative, bountiful land economy,” says McCleary. “Education will be a core value, including using the ranch as an outdoor classroom.”

With such foundational values as guiding principles, the future of Pu`u O Hoku appears as bright as the stars sparkling down upon it. 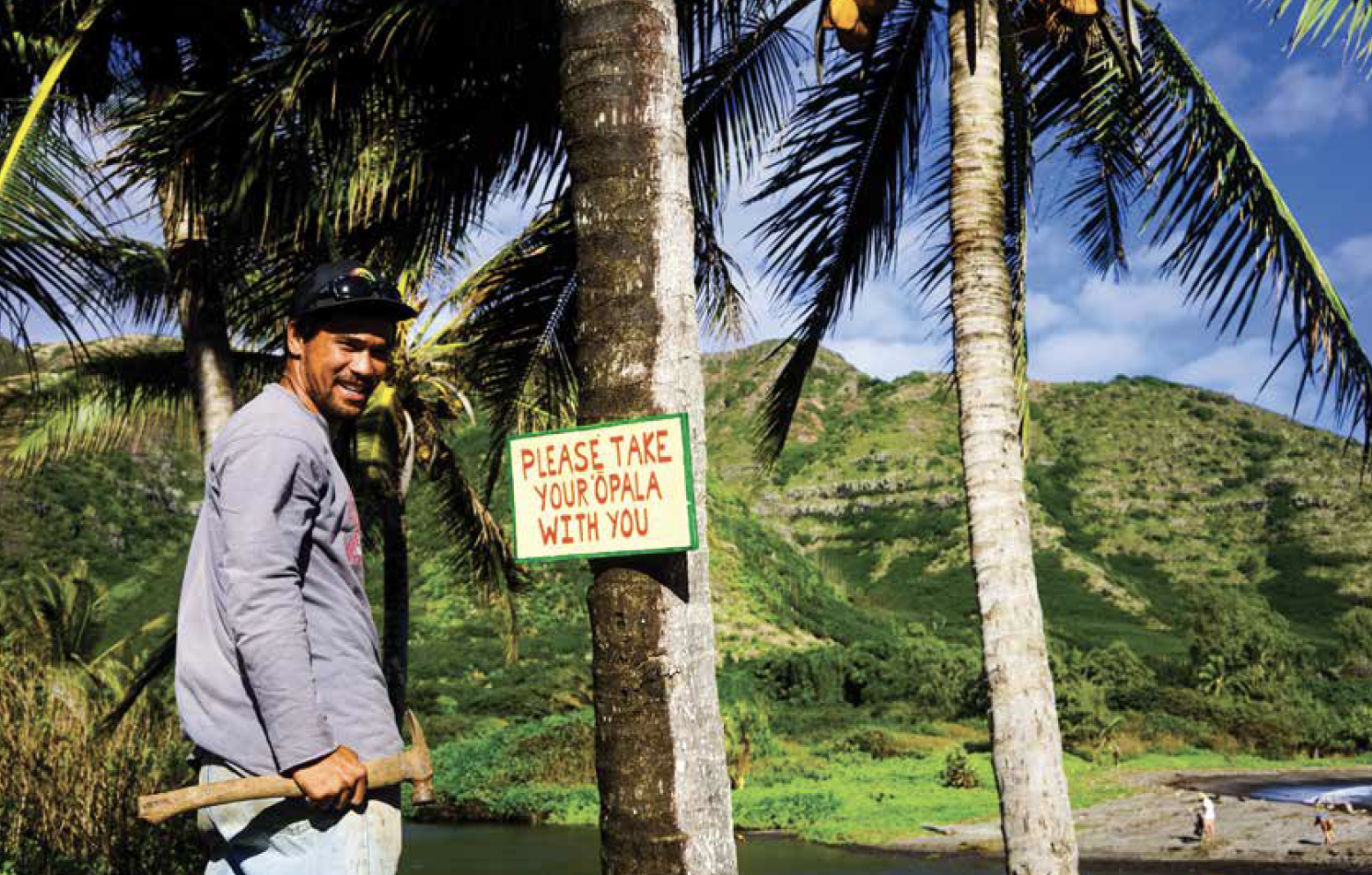