Bobby Pahia wraps his clay brown hands around the base of a kalo plant and wrests it from the soil. Velvet green leaves bow from the thick stalk, which culminates in a bright pink petiole and hefty round root. This is a special kalo variety, he says. Mana ‘ulu. Its starchy flesh turns yellow-orange when cooked. “People don’t grow this one,” says Pahia. “But they want it. It’s different—sweet and ‘ūlika (sticky).

In fact, every variety of kalo is special. For over one thousand years this nutrient-rich carbohydrate fed a thriving nation. Ancient Hawaiians were expert agriculturalists, and cultivated over 300 unique types of kalo—some sweet and sticky, others bearing tender and tasty leaves, and still others good for feeding babies or treating lung conditions. Heart-shaped kalo leaves flourished in nearly every valley across the archipelago. But as sugar plantations drained the streams and Western ways supplanted the Hawaiian subsistence lifestyle, the science and art of kalo cultivation languished. Only a handful of family farms carried on the tradition.

Fast forward to the twenty-first century. In 2010, one of Maui’s most progressive restaurant companies decided to try its hand at kalo farming. Hoaloha Na Ekolu—the parent company of Old Lahaina Lū‘au, Aloha Mixed Plate, Star Noodle, and Leoda’s Kitchen & Pie Shop—feeds over 2,000 people a day. Chefs at these various restaurants steam kalo root and pound it into poi, blend it with coconut to make pudding-like kulolo, fry thin slices into crispy chips, and wrap the edible leaves around meat and fish for laulau. Given the company’s heavy demand for this traditional food, the Hoaloha Na Ekolu owners wondered if they could grow it themselves. They partnered with Pahia on an experimental one-acre patch in Wailuku. 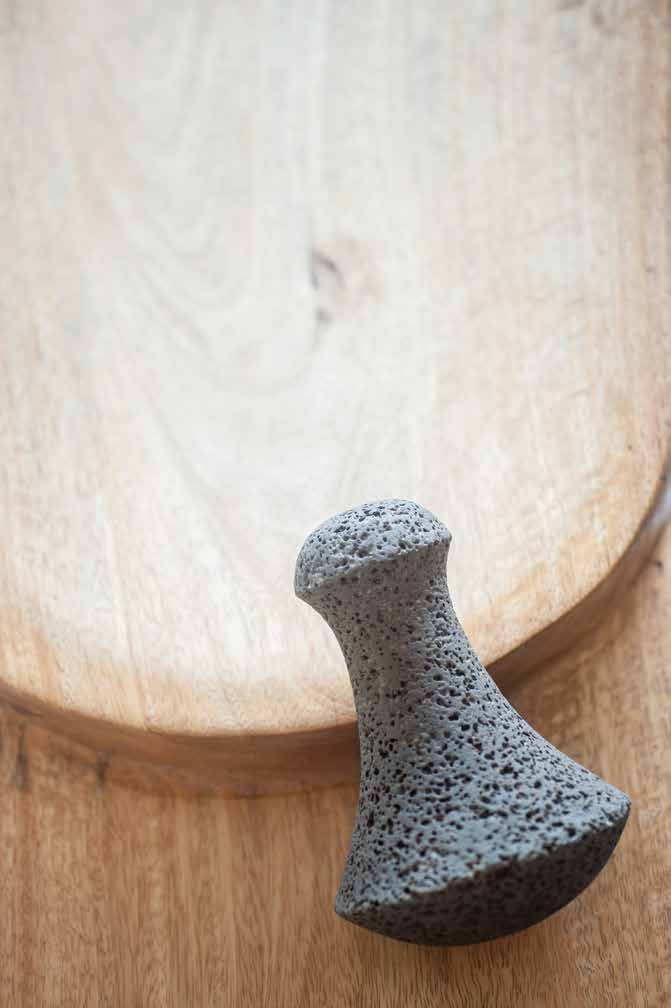 Pahia was the perfect choice. Raised in rural O‘ahu, the greenthumbed Hawaiian moved to Maui in the 1980s to work for the University of Hawai‘i’s College of Tropical Agriculture and Human Resources. There he researched and refined kalo varieties—just as his ancestors had before him. He helped produce the type that’s most widely grown in Hawai‘i today. But more than professional know-how, Pahia has heart.

“When I was growing up, there was poi on every uncle and auntie’s table,” says Pahia, his hazel eyes shining. “It’s become a luxury commodity.” He brushes clumps of dirt from the kalo in his hand and picks off its huluhulu (hair-like roots). “My burn is to put poi back on people’s tables.”

With help from his wife Juanita and daughter Kiani, Pahia planted Hoaloha Farms’ first crop of kalo. One acre quickly turned to three. Before long, customers at Leoda’s could buy bags of fresh Hoaloha poi. Kupuna (elders) got a discount: two pounds for six dollars.

In 2012, the operation took a big step and leased sixty-one acres from the Maui Tropical Plantation in Waikapū. Against the chiseled green wall of the West Maui Mountains, Hoaloha Farms is as idyllic as it gets. Rainbows flirt at the edge of tidy rows of leafy stalks. Native Hawaiian geese honk overhead. While most kalo grows submerged in muddy lo‘i (paddies), the dryland varieties that Pahia propagates thrive in regular dirt. In the past, Hawaiians planted these hardy cultivars in arid regions such as Kaupō, Kona, and Kohala, which otherwise might have been uninhabitable. Hoaloha Farms—now the state’s largest dryland taro producer—is reviving this near-forgotten practice.

“It’s way easier than wet farming,” says Pahia. Still, it’s taken him five years to figure out the basics. “There’s no kupuna to tell us how to do conventional farming on this scale.”

Because Hoaloha Farms was created to augment the restaurants’ supply, it isn’t required to turn a profit. This gives Pahia the freedom to test various techniques. He plants some rows extra wide, the distance between them acting as a barrier halting the spread of diseases and pests. He borders narrower rows with black plastic to keep weeds down. Soil enthusiast Vincent Mina adopted one small row to demonstrate the effects of “natural farming.” This method relies on farm-made fertilizers, cover crops, and mulch— nothing imported. It’s 100 percent sustainable. “That’s my goal,” says Pahia.

He’s up against stiff challenges. The land was previously planted with pineapples—which means it was soaked in potent pesticides. Before planting anything edible here, Pahia sowed a nitrogen-fixing legume, sunn hemp, to remediate the soil. He doesn’t use synthetic chemicals and hopes to achieve organic certification soon. He now grows two-dozen heirloom kalo varieties, including mana ‘ulu, the popular Maui lehua, and the rare ele‘ele naioea—a blackstemmed cultivar with a lilac-purple root that produces coveted red poi. Each night at the Old Lahaina Lū‘au, servers pass out the “poi du jour” with a little card describing which variety it is. 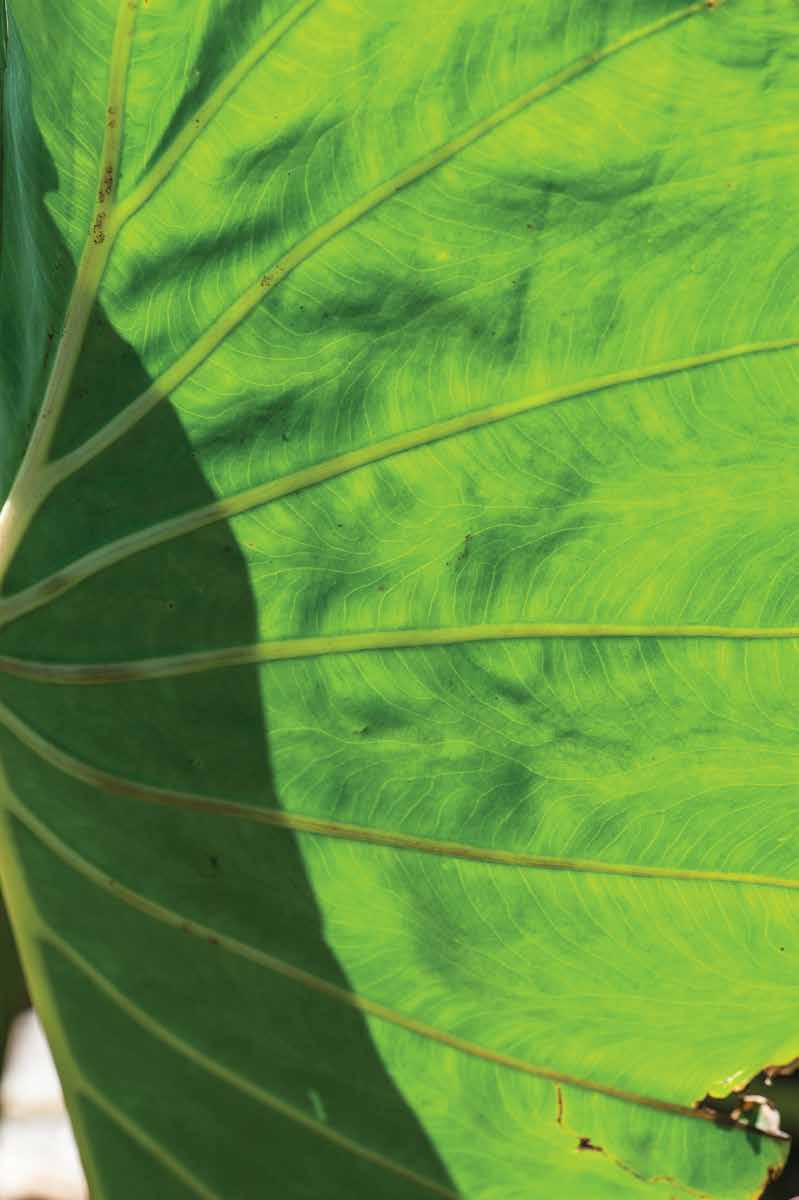 Moore marvels at the changes he’s seen in the restaurant industry— changes his company has actively engaged and, in some cases, inspired. “When we started our business thirty years ago, you could not buy locally grown food,” he says. “For all of the woes of development, there are good things. We’re growing more of our own food than ever.”

Growing our own food sounds simple enough, but it’s a profound act. Native Hawaiians once supported a population close to one million without barge deliveries. Today, Hawai‘i imports a whopping 80 percent or more of its food. Pahia’s eyes well up when he describes meeting people who want to farm but don’t have the resources to do so. Land and water are scarce commodities on isolated islands dominated by tourism. His deepest desire is to get people back onto the ‘aina, the land, growing food for their families. “A lot of good things can evolve out of that. It’s not economic. It’s spiritual.”

For Hawaiians, kalo is more than just a food plant. It is their elder brother, Haloa. It’s also a physical manifestation of Kāne, the god of procreation. When harvesting kalo, the farmer cuts off the top of the plant. This huli is replanted and becomes the makua, or parent of the next generation.

“We’re more than just a farm,” says Pahia. “We actively promote agriculture and perpetuate the Hawaiian culture.” He partners with other farmers, distributes healthy kalo starts, and educates prospective growers, student groups, and all of the Hoaloha Na Ekolu staff about Hawaiian practices and values. “We give a lot away,” he says. Here’s just one example: When a woman at a plant sale asked him what type of kalo would grow best in her neighborhood, he didn’t just offer a recommendation; he brought a crew to her house to help start her garden.

“I am so lucky,” says Pahia, gazing across his field of bowing plants and reflecting on his relationship with Hoaloha Na Ekolu. “I can not say enough about these people. They put their money where their mouth is.”

It’s true in more ways than one. Every year, Hoaloha Na Ekolu shuts down its sold-out lū‘au for the night to host a lucrative benefit for the Hawaiian Islands Land Trust. Exemplary employees receive tens of thousands of dollars to donate to charities of their choice, in their own name. And this year the company celebrated its thirtieth anniversary in business quietly by growing community, kalo and sustaining the future generations.

“A farmer understands that what he sows is what he reaps,” says Pahia. “If he sows education and generosity, that’s what he gets.” At Hoaloha Farms, Pahia follows the example of both his ancestors and his bosses. He plants love, one huli at a time. 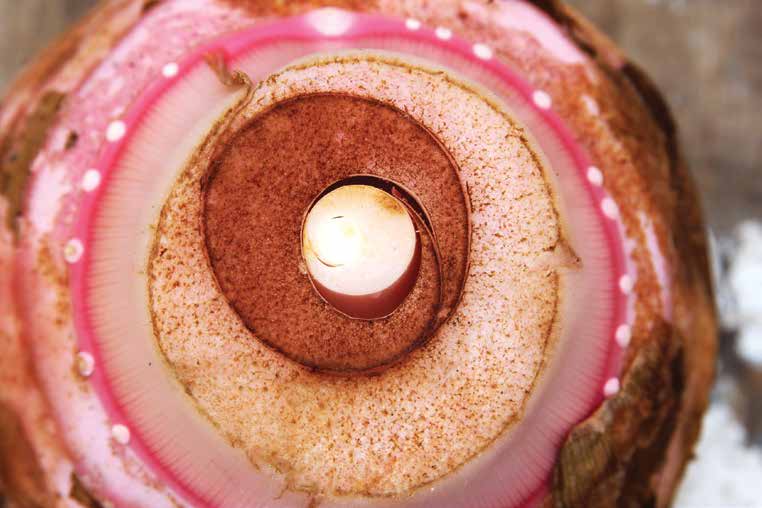 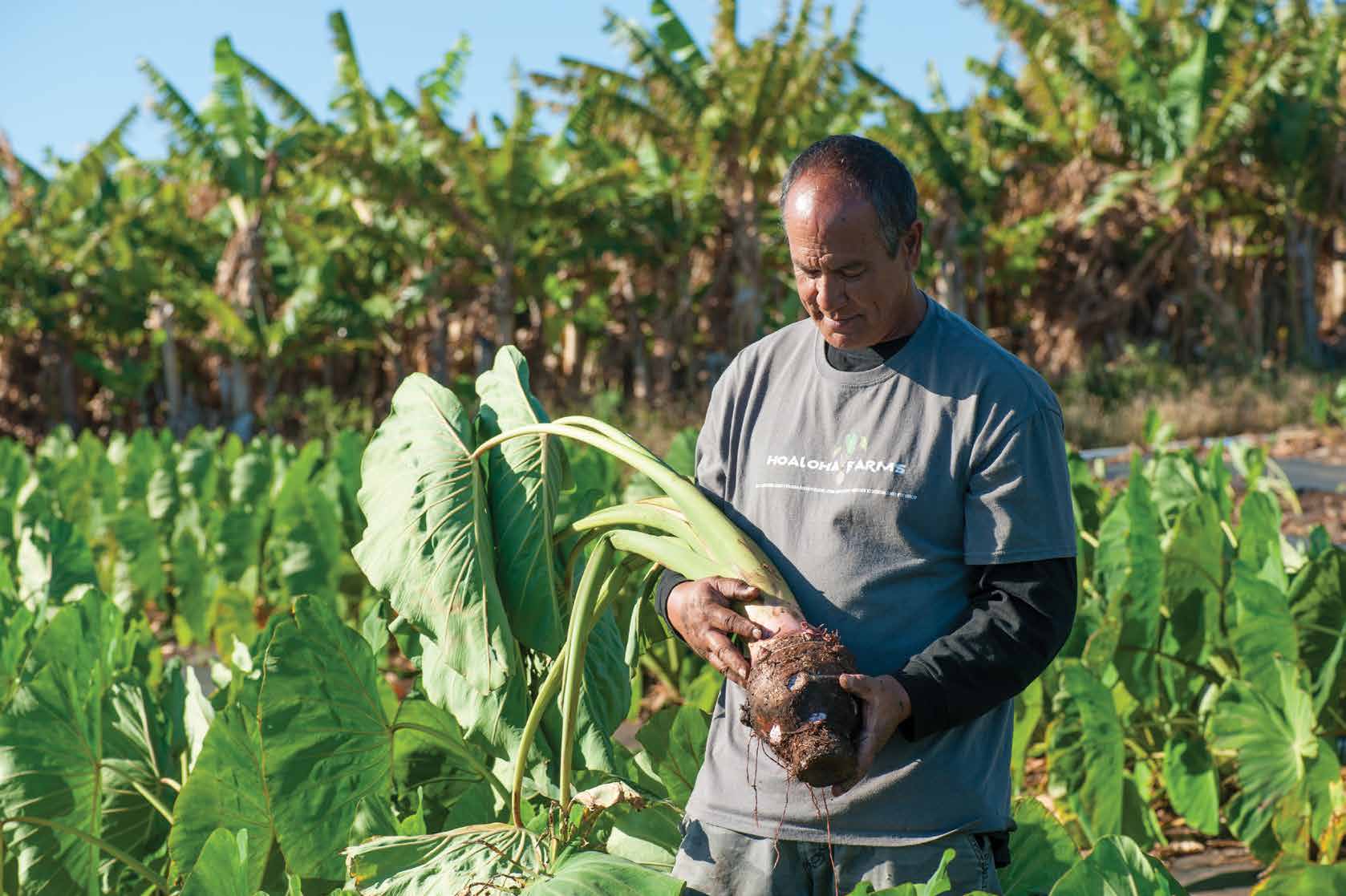