“Few people realize that Hawaii is the most isolated land area in the world- far more isolated than the Galapagos Islands. The importance of protecting endangered species is unsurpassed and it all begins with watersheds. It is crucial that our green mountain tops continue to survive and thrive because they capture and store the water for all of our streams, but most importantly feed all the species that live in Hawaii. Hawaii has over 400 endangered species and all of them would perish without a watershed.”
— Peter Merriman, Chef and Restaurateur

Maui’s Pu’u Kukui Watershed is a heartbeat of the Pacific Ocean- one of the most precious sources of water in the world. Receiving upwards of 365 inches of rain per year, Pu‘u Kukui is one of the wettest spots on earth and home to many native and endangered plant and animal species that exist nowhere else in the world. Translated to ‘hill of enlightenment’, Pu‘u Kukui is the highest peak of Mauna Kahālāwai. Encompassing more than 9,000 acres of the West Maui mountainside, the Pu‘u Kukui Watershed Preserve was created in 1992 and is one of the largest privately- owned nature preserves in the state.

August 19, 2017 saw a special day for both Pu‘u Kukui and Hawaii at large. Home from its momentous three-year global circumnavigation, having visited more than 150 ports in 27 nations, Maui welcomed Hōkūleʻa, the great voyaging canoe, and its crew to Honolua Bay, an auspicious occasion also commemorating the original departure site of its maiden voyage over forty years ago in 1976. Over 1200 keiki welcomed the ship at the shore, and 700 community members honored this momentous event by gathering together for a tree planting ceremony on the watershed above. At one time, koa trees were used to make voyaging canoes, but today there are few of these native trees remaining which are large enough to do so. This celebratory tree planting was aimed at sowing seeds for the future, in the most literal way. 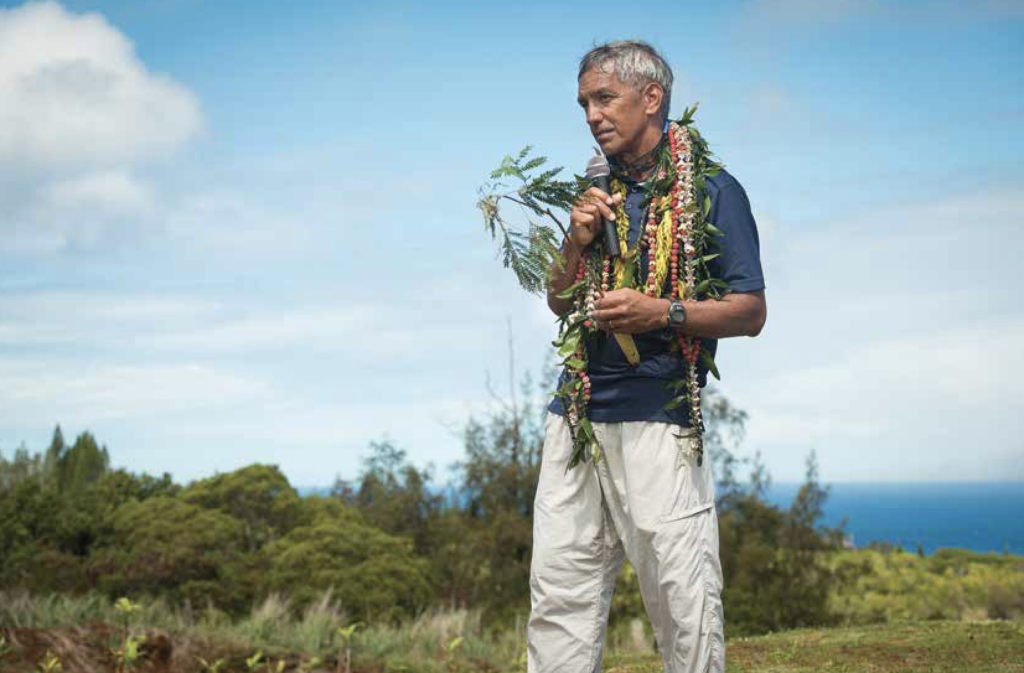 “Today we’re gonna plant canoes…This idea of restoring a canoe forest has brought everyone together, which I think is the ingredient of the real movement of paying respect to our place, our ancestors, and really preparing a role for our children. When we plant trees we plant values of our ancestors. When we put a koa in the ground it means this land must remain sacred. This is a movement – it’s all people, no separations. Today we aren’t just planting trees, we are planting canoes, today we are planting the seeds for a whole new forest, to protect the soil that protects the reefs.”
—Nainoa Thompson, President of the Polynesian Voyaging Society

In total, 4,000 trees took root that day in the Pu’u Kukui Watershed Preserve ma kai conservation area – 1000 koa trees and thousands of other native plants. The idea to plant 4000 trees is a big idea, and ideas like that take not just a vision, but a powerful support team to help them come to fruition. The angel for this dream ended up being Peter Merriman, a pioneer of the Hawaii Regional Cuisine movement that houses his signature restaurant just below the pristine watershed that forms the backdrop to Kapalua Resort. The intact native ecosystem at Pu’u Kukui is exactly the way it was hundreds of years ago and water from this mountain supplies residents and guests alike from Honokohau to Wailea.

It was by chance, as the most kismet partnerships often times are, that Peter Merriman struck up a conversation with a fellow passenger on a flight to Kona two years ago in December of 2016. The passenger happened to be Pōmaikaʻi Kaniaupio-Crozier, the conservation manager for the Pu’u Kukui Watershed Preserve. During that flight Pōmaikaʻi expressed simply the importance of native plant restoration and maintaining the health of the forests at Pu‘u Kukui. 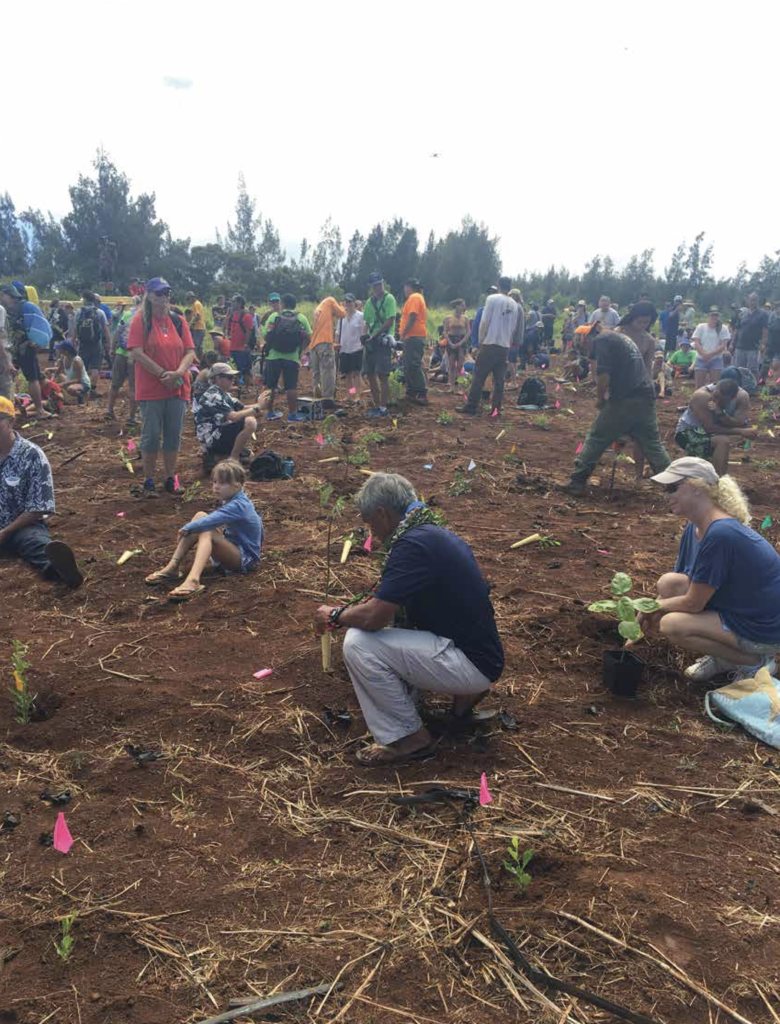 As Peter tells the story, it was the natural decision to support the pristine watershed that shines down on his property. By the time the plane touched down on the runway, the partnership was developed. And no better partnership could have been aligned. Three-time James Beard Award finalist for “Best Chef,” Pacific Northwest and Hawaii, Chef Peter Merriman is credited with beginning the farm-to-table movement in Hawaii over 25 years ago. Merriman showcases his farm to table style at his restaurants throughout the islands with the ever-present mantra to “Do The Right Thing!” for the land, community, and their guests.

Since that fortuitous discussion on the plane in December of 2016, Peter and his staff have put their passion and support into being pono, doing the right thing. Through the “Adopt a Tree & Preserve Our ‘ ina” membership program, diners are given the opportunity to purchase a native tree to be planted in the rainforest, participating in the preservation of one of the most beautiful and sacred places in all of Hawai‘i. The 3-tiered program offers the option between the A’ali’I native shrub ($50), Koa Tree ($100), or the Ohi’a Tree ($200) which are all vital to the island’s watershed. 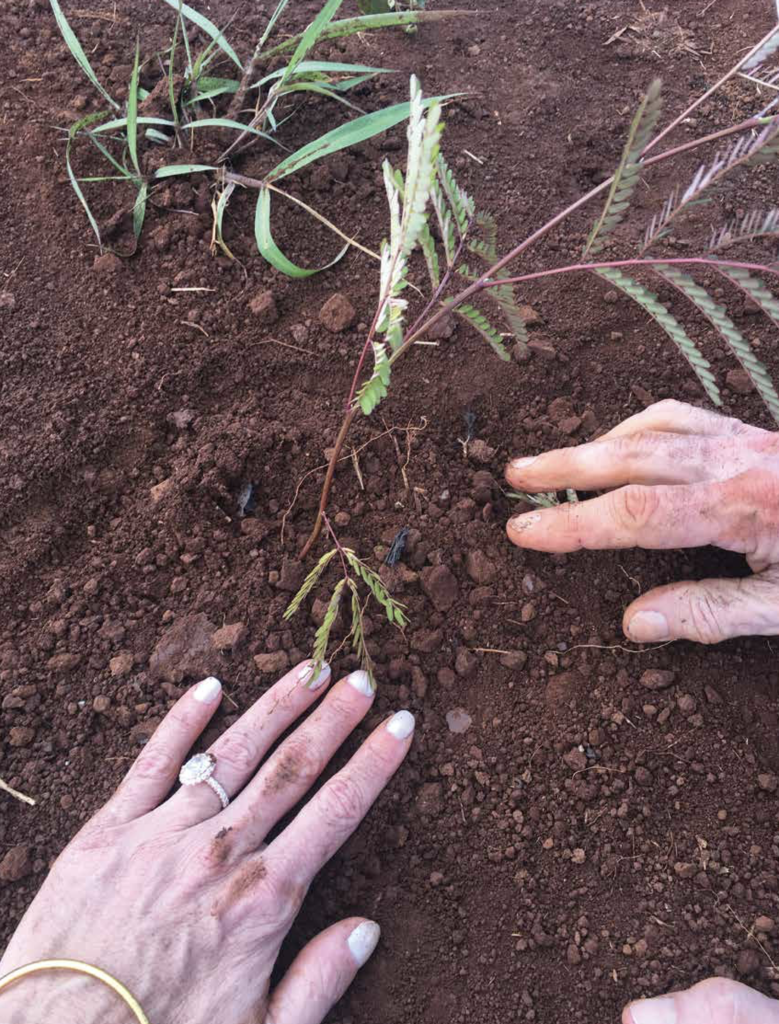 Through Merriman’s commitment to donating $1 from each Caesar Salad sold in perpetuity (forever), this donation goes beyond supporting Friends of Pu’u Kukui, the non-profit organization dedicated to the conservation and maintenance of the Pu’u Kukui Watershed Preserve. It is a model for the community that demonstrates a dedicated and longstanding commitment that Merriman’s will uphold their responsibility. Merriman’s brought to light that water from Pu’u Kukui is everyone’s resource and thus everyone’s responsibility.

Upon the return of Hōkūleʻa to Honolua Maui, Merriman’s Kapalua hosted an intimate meet and greet event celebrating the Hōkūleʻa crewmembers and Maui Island. With attendees from Hōkūleʻa, Pu’u Kukui, Save Honolua Coalition, and Maui Native Nursery among others, the public event raised a total of $3,045, which was donated to Pu’u Kukui Watershed Preserve to help defray the cost of the tree planting event.

In total, Merriman’s provided more than $12,000 in monetary support to Pu’u Kukui in 2017. Outside funding from Merriman’s assisted in the planting of a 5-acre native mesic forest (with koa trees, lama trees, ‘a’ali’I shrubs and native grasses) and reducing the pressure of invasive weeds to the upper reaches. Also thanks to Merriman’s support, nearly 2,000 community members engaged to participate in marine awareness, erosion control, native planting, and mesic forest restoration. 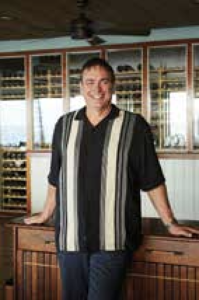 “It’s important that we continue our commitment to Hawaii Regional Cuisine and our philosophy of giving back to Hawaii’s community – culturally, economically and ethically. We have always operated with the goal to leave the world a better place. Our donation program with Pu’u Kukui is very special and one that is important for the sustainability of Maui’s water supply and natural resources. Helping to conserve the Pu’u Kukui Watershed Preserve aligns with our on-going efforts to protect the ‘āina for future generations to come. The promotions we offer at the restaurant encourage giving back.”
—Peter Merriman, Chef and Restaurateur

The 1,000 koa trees in the native forest were a planting of canoes for future generations- providing natural resources as well as reminding the world of the Hawaiian commitment to Mālama Honua, to care for the land- from the summit of Pu’u Kukui, to the shores of Honolua Bay, to around the globe. The koas planted in this year one infant stage will soon be a seed source supplying future planting efforts. Over time, as trees become mature, future generations will have the opportunity to carve koa canoes as Hawaiians have in the past. Not all trees will be mature at the same time or even ideal shape or size, but those trees will always be seed sources and part of the fabric of native forest habitat supporting water recharge. 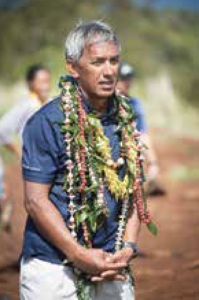 “I was worried about my children living in the urban setting and having no access to getting connected to the earth. When I watched them yesterday, on their own, quietly and softly, protecting the koa seedling, putting it in the ground gently. They said, “Dad can you bring me back, I want to see my tree?” The real seeds that are being planted into the hearts and minds of children, they are the leadership of the future. Every time there is an act of kindness like you see today, act of love and aloha, we aren’t doing it for ourselves, we’re not doing it for just Honolua, yes, it’s for Hawaii but really it’s for the earth. So what we had today was this community that came together to be part of the greatest movement ever. It’s a race, right, it’s a race about what we destroy compared to what we renew. So, today we win.”
—Nainoa Thompson, President of the Polynesian Voyaging Society, August 19, 2017, Pu’u Kukui Watershed Preserve