When Dave Fitch wakes up at 5:30 each morning, his two-year-old daughter clamors to help him with the chores. Dad lifts her onto the ATV loaded with buckets of fruit and grain. Together they make the rounds at what may be the prettiest pig farm in America.

Mālama Farm sits on a knoll in rural Haiku, with a view of Maui’s dramatic north shore. The light breeze carries the scent of passion fruit and Puakenikeni flowers—not the rank smells typically associated with pig farms. That’s because the pigs living here aren’t confined to pens, belly-deep in their own slop. Mālama Farm is one of the nation’s few pasture-raised piggeries and the first in Hawai‘i to offer 100 percent Berkshire pork. 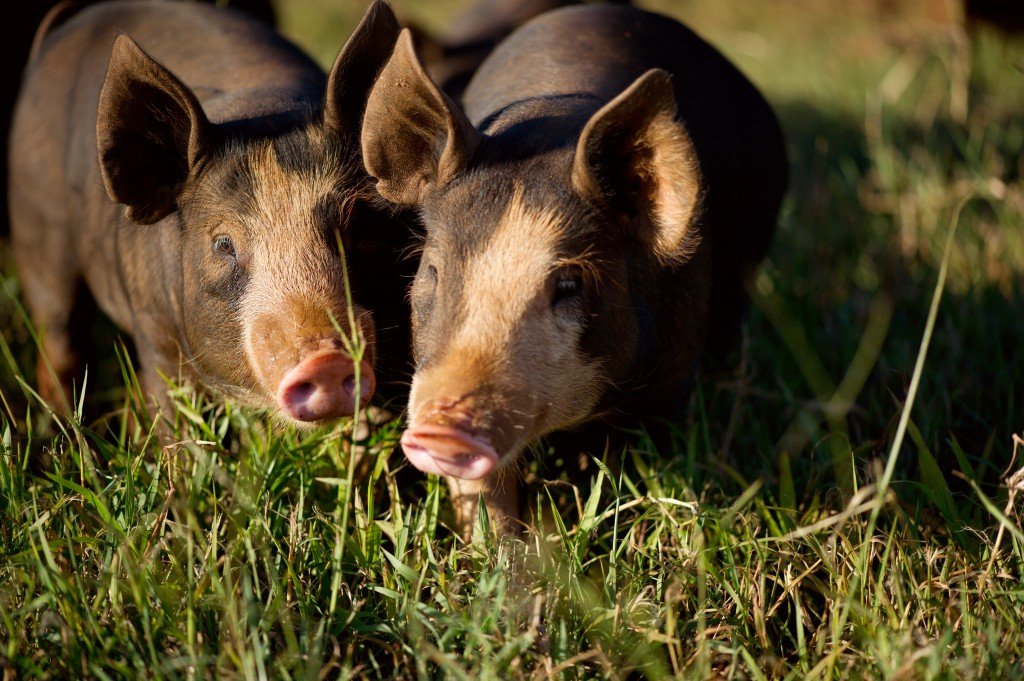 Dave and Lehua Fitch’s farming adventure started with the kind of naïve back-to-the-land impulse that doesn’t often translate into long-term success. Inspired by “Omnivore’s Dilemma,” “Food Inc.,” and their travels through rural New Zealand, they decided to tackle small-scale agriculture to prove that it’s still possible in the United States. Neither had farming experience: he’s a furniture maker and she’s a software executive. So the young entrepreneurs started with a blank slate, balancing each decision against what would be best for the animals, the land, the community and their family. And in less than two years, they brought their first litter of top-quality hogs to market. In their own small way, the Fitches are transforming the meat industry—one piglet at a time.

To understand what’s special about Mālama Farm, it helps to understand what’s not special at most commercial pig farms. The majority of piggeries in the U.S. are large warehouses where animals are confined for life to individual stalls, pumped full of antibiotics and growth hormones, and deprived any opportunity to exhibit natural pig behavior. In the worst scenarios, they can’t sit or turn in their pens. Many go berserk and injure themselves. At these cheap meat factories, sewage is a constant problem; overflowing refuse ponds can poison the groundwater.

“How pigs are raised is an unspoken tragedy,” says Lehua. “It’s really horrifying when you know how sweet, gentle and smart they are.”

Confronted with dirty details of industrial farming, the Fitches decided to put their money where their mouth is. They bought property on Maui and researched livestock they could raise themselves. They chose pigs because of the animals’ intelligence and importance to Hawaiian culture. Next they opted for a heritage breed with a ready market: Berkshire, or Kurobuta as it’s known in Japan. Chefs covet Berkshires for their clean flavor and well-marbled fat. The slow-growing hogs have dark hides that protect them from Hawai‘i’s tropical sun. Plus, they have good personalities, says Dave. “We wanted animals we’d enjoy working with.”

Lehua and Dave’s light-hearted approach to husbandry is evident in their pigs’ names. The boar is Hef, after Hugh Hefner. The sows in his harem: Candi, Trixie, Lola and Bubbles. 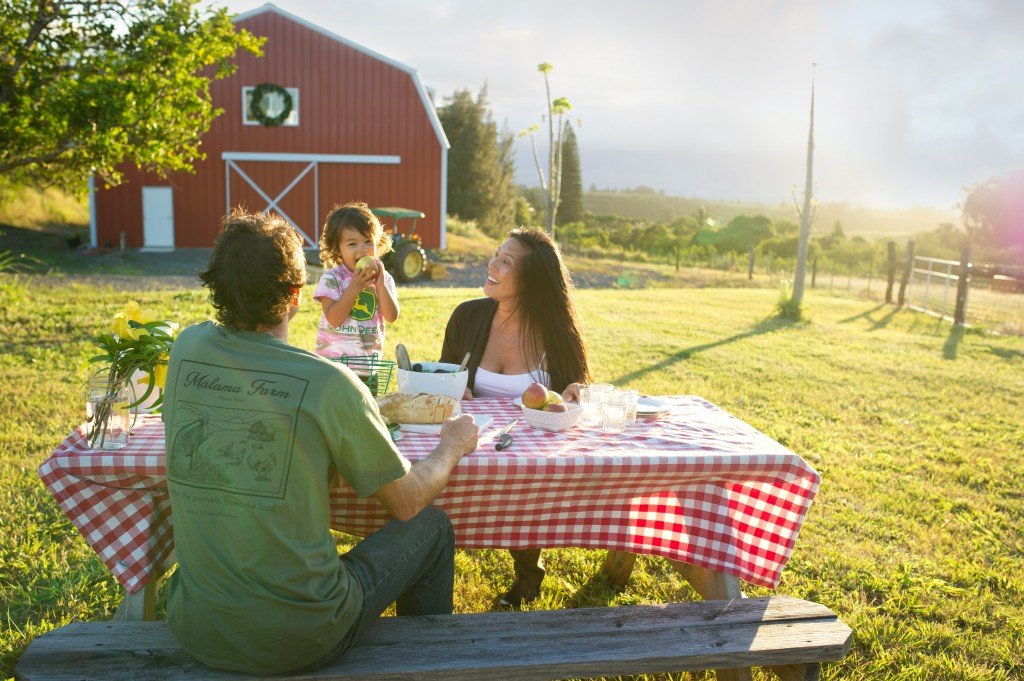 The Fitches prepared for their pigs’ arrival in 2010 by planting nutrient-rich grasses across their five-acre farm. “People told us pigs don’t eat grass,” says Lehua incredulously. “They do!” She and Dave also planted ‘ulu (breadfruit), macadamia nut, banana, papaya, avocado and citrus tree to supplement the pigs’ (and their own) diet. Each dawn, the Fitchs’ daughter pitches these treats out to the ranging herd. Chocolate brown piglets kick up dust as they scamper through the grass like warthogs on the Serengeti. They snuffle and grunt for their share of breakfast, snouts down, corkscrew tails in the air.

On special occasions, the spoiled swine enjoy a beer or two. Dave is negotiating with Maui Brewing Company to get brewer’s grain, a by-product of the beer-making process that pigs find extra tasty. He and Lehua aren’t above scrambling eggs for their herd, either. “You can make a pig do amazing things with scrambled eggs,” laughs Dave.

Each week, Dave rotates Hef and the ladies to a new 50 x 50 grazing area, by shifting the electric fence line and sliding the mobile shade huts he built onto fresh ground. 300-gallon horse troughs serve as ready-made wallows: portable pig spas where hot swine can cool down. Once the herd vacates an area, Dave turns his cleanup crew of chickens loose to peck away any fly larvae. Pig manure is no problem here; it serves its natural function as fertilizer. 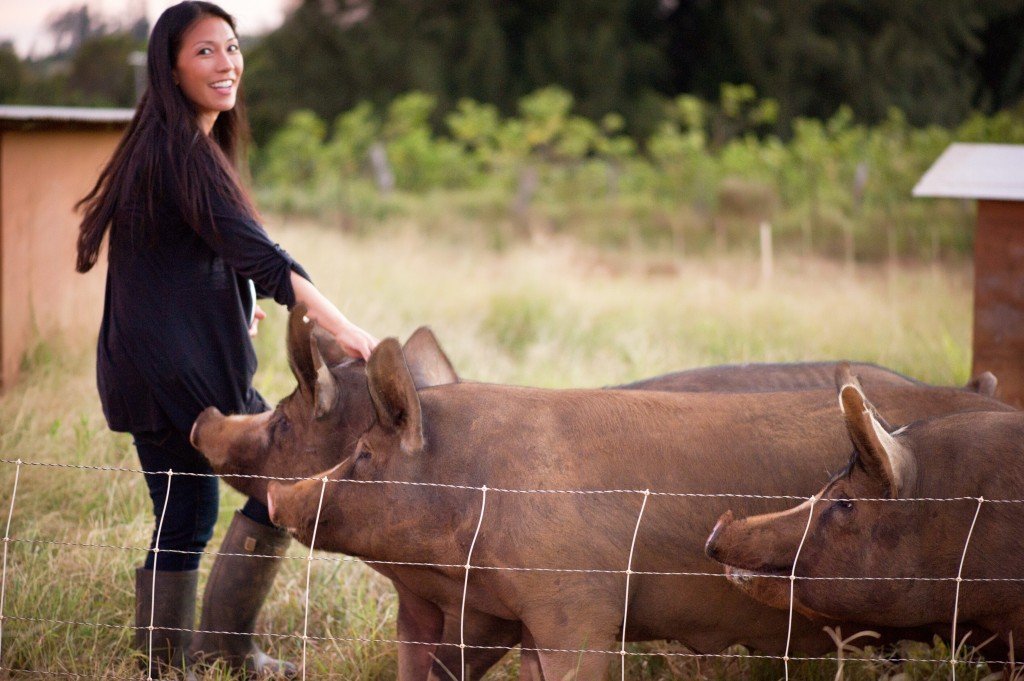 Sows are bred only once or twice a year, compared to industrial farms where they’re continually impregnated. Mālama Farm’s large, healthy litters have drawn the admiration of other Berkshire breeders. Dave fashioned farrowing huts—where the sows can go to birth and nurse piglets—with the animals’ comfort and safety in mind. Mama pigs are so massive they can accidentally crush their babies. Dave’s A-frame design allows piglets a little wiggle room; they can safely retreat into corners too tight for mom. Littermates stay together for their entire lives, which prevents anxiety.

The Fitches castrate males, but that’s about the extent of their veterinary needs. Because of the pigs’ clean food and living environment, vaccinations and antibiotics aren’t necessary. When it’s time for the trip to the slaughterhouse, the pigs climb into a trailer that Dave designed to mimic their shade huts—same wood floor, same color walls—so the animals don’t experience any trauma during transport. This contributes to the quality of the final product: less adrenaline in the meat.

The unrelenting nature of farming is not for everyone, but it’s so rewarding, Lehua says. Now pregnant with a second girl, she hopes the new baby will take to farm life as keenly as big sister has. 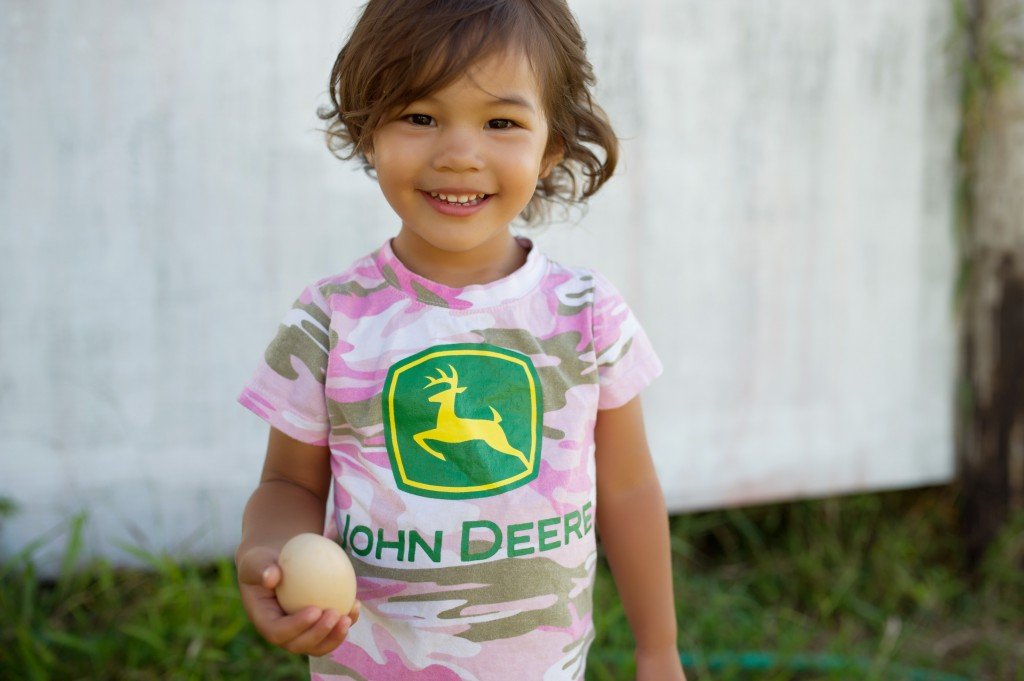 Proof Is In The, er, Pudding

The true proof of success came with the Fitches’ first harvest. They were nervous. How would they feel sending their pigs to market? How would the pork taste? Would the chefs like it? They slaughtered the first pig themselves, under their avocado tree. “It was profound for us,” says Lehua. “We cried while we ate it, we respected the whole process.”

They weren’t the only ones. Ed Kenney of Town restaurant in Honolulu and Neil Murphy of Merriman’s were quick to place orders for Mālama Farm pigs—and now the waiting list is long. Gerard Reversade of Gerard’s in Lahaina was especially happy to get his hands on a whole hog. His uncle was a charcutier in France’s Loire Valley; his family has a long tradition of snout-to-tail cooking. The classically trained French chef cherishes every part of the animal, transforming the head, feet and blood into confit, pate and black pudding. He seasons his rillettes—succulent mounds of shredded pork—with just a pinch of salt and pepper. “The pork retains its full taste,” says Reversade. “It’s really delicious.” When he shared some of his family recipes with the Fitches, their daughter sampled her first headcheese.

Chris Kulis of Capische in Wailea says Mālama Farm pork is pricey, but worth it. “The superior feed that the pigs eat comes through in the moisture and the quality of the fat; it blows mainland competitors away,” he says. “I use less aromatics [with Mālama Farm pork], I don’t have to do as much to make it taste good.” Thanks to Mālama Farm, he’s served mouthwatering local sausages, pancetta, bacon and soppressata at his restaurant, and is eagerly anticipating his first prosciutto, which takes a full year to cure.

The practices Dave and Lehua employ at Mālama Farm benefit everyone involved. “We make sure we give the pigs the best life possible,” says Lehua. “We know they are going out to nourish people.” 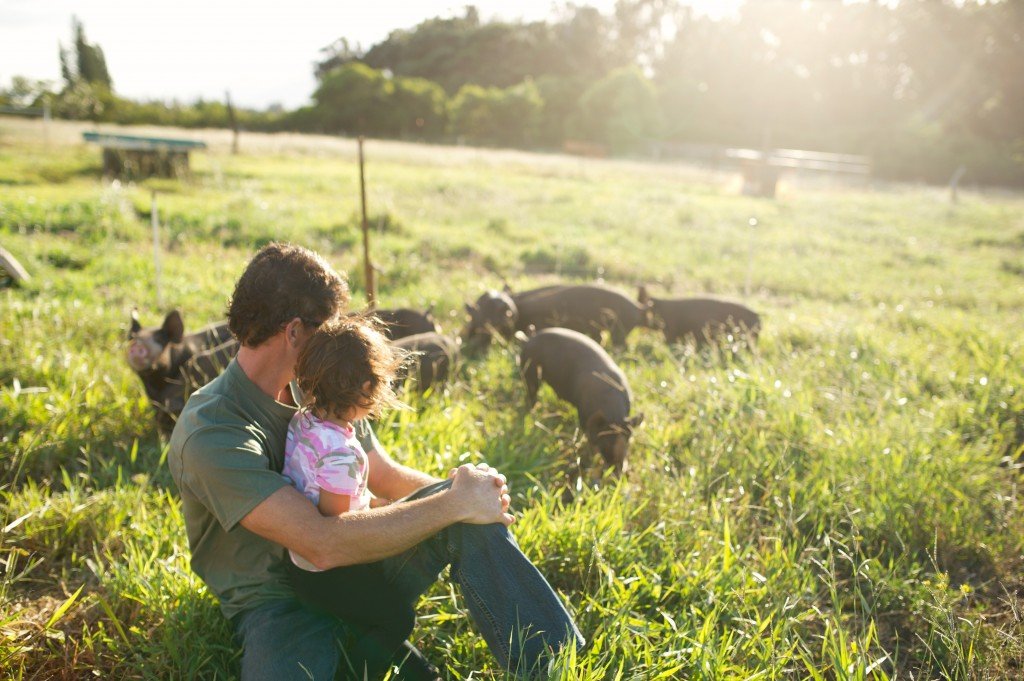