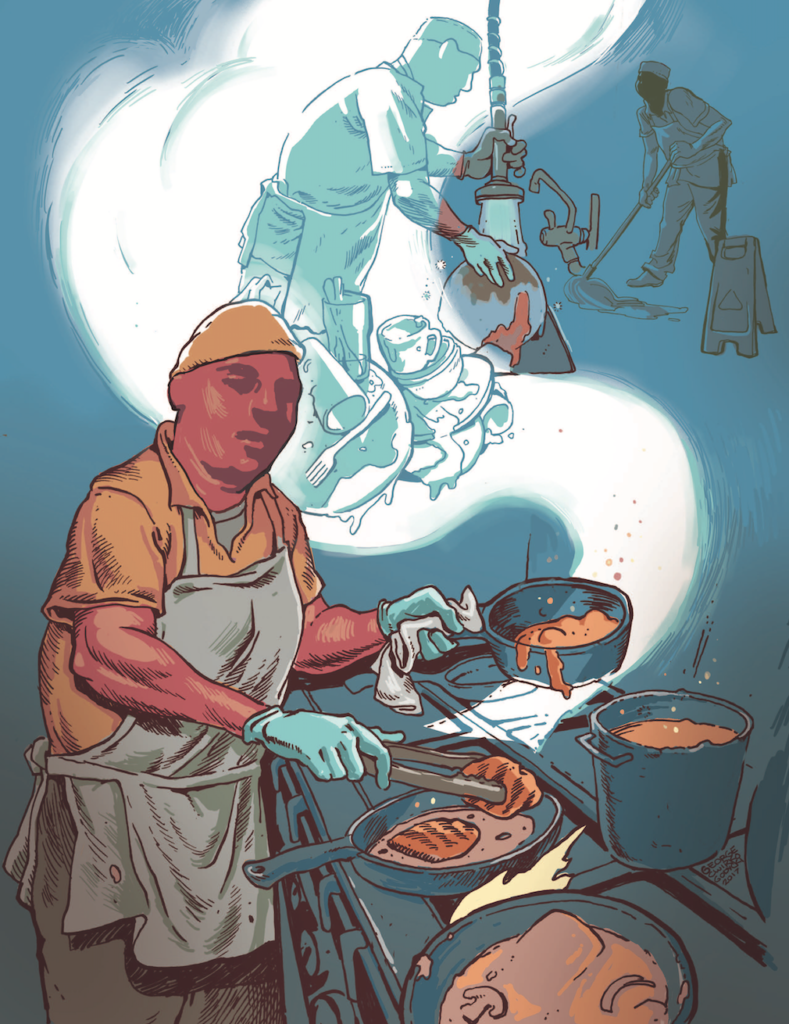 Carl first walked into the kitchen six weeks ago, a tidy knife roll tucked beneath the starched sleeve of an immaculate chef coat. He was bright eyed and exuberant, eager that this second job would enable him to get ahead on his school loans and car payment.

If you saw Carl today, you wouldn’t recognize him—there are dark bags beneath his eyes, his jacket is wrinkled and his shoulders sag. He lethargically nurses a massive cup of coffee while staring blankly at the morning prep list. Casting his eyes toward the floor, he addresses the chef, “I’m sorry, I didn’t get home until midnight. I don’t know how much longer I can do this.”

“I can’t keep working until midnight and then getting here at 8am. It’s killing me.” That was it. A few days later Carl packed his bag and went his way. Six weeks of working double shifts in the kitchen had wrecked him. They shook hands on his way out the door. Just as Carl stepped away, the chef whispered something just loud enough for the two of them to hear, “At least now you know how it feels to be a real line cook.” It was harsh but true.

Someone outside the industry could never imagine the physical and psychological endurance required of professional cooks. I’m not talking about the recent culinary school graduates or kids making a living while pursuing school. I’m talking about the lifers, the cooks who have spent more time in the kitchen than anywhere else on earth. There is something super-human about career line cooks that often keeps them going from before dawn until past midnight. What drives these men and women to give their lives to such a demanding profession?

In the case of another cook, Tomás, it was growing up in the tiny village of Santa Inés Yatzeche, in the southern corner of Oaxaca. He lived in a single room with his parents and four siblings. By his own account, he grew up with nothing. When I asked what that meant, he described it this way: “When the rains come, it will be a good year. When there is drought, there will be nothing to eat. We were too poor to have a cow or other livestock—we depended on the seeds we planted, and that was all we had.”

Tomás set out to the United States shortly before his 16th birth-day. He knew only vaguely that he was headed to Seaside, Calif., where he would meet a distant uncle. He did not leave home in search of a better life; he left because he had no choice and because, as the eldest sibling, his family depended on him.

Tomás did make it to Seaside, but finding a job proved difficult. The largest hurdle was that he didn’t speak English, making it almost impossible to communicate with anyone. Even today, almost 90% of Santa Inés Yatzeche residents speak exclusively Zapotec, Tomás’ first language. Eventually, despite the language barrier, Tomás was able to get a job washing dishes at a private school, where a group of Tutus (older women) who worked there slowly taught him to speak English.

It wasn’t long before Tomás was working two jobs and making enough money to pay his monthly expenses and send a little money back to his family in Oaxaca. Each week he would travel to Salinas where he could transfer funds and occasionally get a package of food from home; Oaxacan goodies like tlayuda, chiles de agua and chapulines.

Tomás arrived in Seaside in 1988 and has been working two jobs ever since. His first job paid $4.95 per hour for washing dishes. Over the years he steadily moved up through the kitchen and was paid increasingly more. He spent nearly 25 years working at a cel-ebrated local restaurant where he moved up through the ranks from dishwasher to lead line cook. At the height of his career he made more than $20 per hour, but when the restaurant sold a few years ago, he was offered a demotion and lower pay. He elected to leave, taking a dishwashing job at a busy restaurant in Carmel, where he would have less stress and responsibility.

Today he rolls out of bed at 5am. He jumps in the shower, brews a cup of coffee and quietly slips out the front door, trying not to wake his kids or wife. By 6am he is parked in downtown Carmel and headed toward his first job as lead cook at a busy breakfast restaurant. During the height of the season the restaurant can serve more than 600 guests a day. Steaming pots of poaching water for eggs, dozens of omelet pans and large griddles are all pushed to their capacity as the cooks burn through close to 1,000 eggs per shift.

The tempo is non-stop; from the time the restaurant opens its doors at 7:30am, there is a constant stream of activity, a perpet-ual line of hungry tourists eager to be fed and go about their day. It’s all the cooks can do to keep up with the ever-growing stack of order tickets, as they relentlessly spew from the printer to the counter below.

At 3pm the restaurant finally closes its doors. The adrenaline begins to fade, and Tomás can feel the stinging welts left by grease spattered across his hands and the burning red lines across his forearms from bumping the oven door. The kitchen is a mess. A wayward egg has been smashed into the floor mat, and grease from the griddle is overflowing its trap and down into a meander-ing stream across the floor. Piles of kitchen towels crusted with golden egg yolk, strawberry jam and black soot lie in a greasy pile in the corner.

As the servers count their tips, Tomás takes a deep breath and begins pulling kitchen mats—heavy with grease and food scraps—out of the kitchen and up to the loading dock to be hosed down. He wipes and polishes the counters, then sweeps and mops the floors before returning the cleaned mats to their positions and turning out the kitchen lights.

It’s already 4:15pm, and he was supposed to be at his next job 15 minutes ago. Tomás hurries out the back door and jogs a few blocks to an already bustling restaurant. The morning dishwasher has already left, and the dish station is stacked with dirty plates and pots. The line cooks from the morning shift, also rushing to get to their next jobs, have left a mountainous stack of half-emp-tied containers and pots and spoons caked with dried sauces. Drink straws and lemon wedges intermingle with chunks of dis-carded chicken, shrimp shells and a mosaic of greasy sludge cov-ering the stainless dish pit.

By 5pm, despite a deluge of dirty dishes continuing to arrive from the dining room, Tomás has caught up with the mess and has been able to clean the pit in preparation for dinner. The line cooks had put up a plate of tacos for the staff, and he is just in time to snag a couple and store them on top of the dishwashing machine to keep warm for later. His hands are prune-like and swollen from the hot dishwater, but that doesn’t stop him from taking a few quick bites before the dinner rush.

Dinner service pumps out dishes relentlessly from around 6pm until well after 10pm. By the time the last plate is washed and the floors are cleaned, it is just past 11pm. Tomás walks through the empty streets of Carmel back to his car parked six blocks away. At 11:45pm he quietly slips through his front door, trying not to wake his children or wife.

This is Tomás’ life, a relentless grind from well before sunrise until almost midnight—five, sometimes six, days a week. Yet despite the constant throbbing that comes with standing 18 hours a day, he is always smiling, radiating warm optimism and a level of grace that defies explanation.

After 28 years of working as a cook, this schedule has somehow become a normal part of life. No matter how difficult the work or how long the days, he sleeps well knowing that he has made an incredible difference in the lives of his parents and children. Today, four out of his five siblings live and work in Seaside. They spend holidays together, often with more than 30 family members gathering to celebrate the occasion. His eldest daughter is now studying law at UC Santa Cruz on a full scholarship while his middle son applies for computer engineering programs.

Meanwhile, with the help of their kids, Tomás’ parents in Mexico have been able to build a larger house and create a more sustain-able farm with chickens and cattle. They are no longer entirely dependent on the summer rains and have been able to use the money their children sent home over the years to create a life they would have never dreamed possible.

When you look at what Tomás has been able to achieve over the last 30 years, it is truly a testament to how much he loves and respects his family. It is a reminder that, for many, the true Amer-ican dream is far from easy to attain—it is a road that is long and grueling, one that both makes lives and takes them away.

It is easy for us to talk about a “living wage” or whether restau-rants should abandon the traditional gratuity models in exchange for a higher inclusive menu price and consistent pay for both cooks and servers. It is easy to speculate about how higher hourly pay rates will destroy the service industry. It is much harder to talk about the facts, the raw reality of the way many people in the restaurant industry live. The hard numbers can be seen on the Massachusetts Institute of Technology’s living wage calculator, link shown below. And remember, the figures don’t include movie tickets and dinners out on the town. They also don’t include vacations to San Francisco or fl ights back home. They only cover the bare necessities required to live a basic life.

The former executive chef at Post Ranch Inn’s Sierra Mar, John Cox is now pursuing a number of projects, including serving as a partner and consulting chef at Cultura – comida y bebida in Carmel and chef-partner at The Bear and Star at the Fess Parker Ranch in Los Olivos. John also spent several years as executive chef in Hawaii For more, go to www.chefj ohncox.com. This story fi rst ap-peared in edible Monterey Bay.

AUTHOR’S NOTE: If this article was about the success of local chefs or sommeliers, their names would be prominently featured and they would bask in the limelight. But at their request, we have changed the names of the cooks in this story. Sadly, there are thousands of people in California who share Tomás’ story and accomplishments—people who will never make it into a magazine or be publicly celebrated. There is no magic utopian formula that will end inequality or enable a “living wage,” but at the very least we owe these cooks our respect and admiration. I wrote this story to put a spotlight on thousands of faceless restaurant workers who deserve recognition.