Lemons are just beginning to get the respect they deserve and in Hawai`i we’re fortunate enough to have a large number of varieties to grow, market and use for a massive number of culinary creations. There are almost 14 million tons grown worldwide, with India and Mexico the largest producers. In Hawai`i we grow and sell less than 100,000 pounds and still import almost 4 million pounds. Pretty shameful considering how lemons go to waste in the state.

Most who study horticulture think the lemon originated in northern India as a naturally occurring hybrid between sour orange and a citron. Lemon made its way to Italy in 200 AD then Iraq and Egypt by 700 AD. By the end of the 12th century it had spread all around the Mediterranean. In 1493, Columbus brought it to Hispaniola and from there it went with the Spanish to California in 1751. Don Francisco de Paula Marin first brought lemon to Hawai`i in 1813 with other varieties coming in 1823 with traders.

Early territorial reports from 1904 to 1906, including a USDA Citrus in Hawai`i publication, listed Eureka and Lisbon varieties. These and other publications mention Villa Franca and Sicily, which I’ve yet to be able to identify in Hawai`i. The rough Jambiri came as a rootstock in the 1920s and started to produce prolifically by 1934 when the grafts died off. Ponderosa and its seedling American Wonder and a sweet lemon were all mentioned by 1934.

The Rangpur lime came to Hawai`i as a rootstock but those grafts also died off. Over the next 175 years the trees evolved so that Rangpur has a puffy orange skin and very thorny branches. Its offshoot that is now called Kona lime has a tight skin and very few thorns.

There is also a primitive subgenus of citrus called Papedas, some of which also came to Hawai`i as rootstocks and now produce here. Ichang papeda is often mistakenly called or sold as Japanese Yuzu. Yuzu, however, also fits into this subgenus as does Suidachi, Yuko, Kabosu, Khasi, Melanesian, Kalpi and the popular Kaffir lime.

Kalpi is arguably one of the most common lemons in Hawai`i. A natural hybrid found in the Philippines, one could only presume that it came here with the immigrants. The name comes from the Bicol region of southern Luzon. These trees are found all over the state and very prolific. They are often confused with small Italian lemons that are very recent imports and the larger rough-skinned Jambiri lemon. Kalpi is sometimes called Malayan lemon.

Here are some popular varieties:

The lemon was first found on a fruit-hunting trip by Frank N. Meyer, who was sent to China by the USDA’s David Fairchild. Of the more than 2,500 species Meyer introduced to the United States, this is the only one that bears his name. The Meyer lemon has dramatically increased in popularity over the past 20 years in part due to Alice Waters and Martha Stewart featuring them. They do very well in warmer climates like Hawai`i where other lemons may struggle with the heat.

The improved Meyer lemon is a selection found in the 1950s that is resistant to tristeza virus. It was released in 1975 as an improved version. Ever-increasing in popularity, it is sometimes referred to as the Sweetheart citrus.

Called sweet lemons and, to a lesser extent, limes, this fruit found in some areas of Hawai`i. “Sweet” is somewhat of a misnomer as the fruit is generally insipid with only a very slight taste. A number of varieties were introduced from India and later Brazil and Mexico but they have never achieved any commercial value. The fruit is not without fans and there are a few named cultivars.

This rough-skinned lemon, originally from northeast India, was commonly used as a rootstock for citrus coming to Hawaii. Those grafts died off and the tree became a popular backyard tree. Recent studies, using molecular markers, show that it is a cross between mandarin and citron. The tree is somewhat resistant to a host of pathogens and extremely resistant to leaf spot although sensitive to Phytopthora and waterlogged roots. It is tolerant of both cold and Hawaii’s hotter than average, for citrus, climate. Its unclear if the fruit arrived in Hawaii with Marin in the early 1800s or later with the first Portuguese immigrants. The Spaniards are credited with bringing the fruit to Florida and the new World. There are a number of named cultivars; Estes, Milam, McKillop, Nelspruit 15 and Lockyer although it’s not known if these are in Hawaii. About 98% of the seeds planted are true to form and the tree is fast growing and early maturing. Some texts list the Volkamer or volckameriana lemon as being a type of Jambiri. Rangpur and Kona lime is also given the Jambiri name at times.

Ponderosa and its protégé American Wonder are among the most popular lemons grown in Hawai`i. Elsewhere it’s considered an ornamental because of thick foliage and very large “showy” fruit. It came from a seedling grown in 1887 by George Bowman in Hagerstown, Maryland. It appeared in many nursery catalogs in the early 1900s. Sometimes classed as a citron hybrid, ponderosa fruit is extremely large. It has been confused with pummelo at some of Hawai`i’s farmers’ markets, although one taste makes it is obvious that it’s a lemon. There are some commercial plantings and the tree is often used as a rootstock for other lemons.

The first Eureka originated from seed in 1858 in Los Angeles and was propagated in 1877 by Thomas Garey, who called it Garey’s Eureka. Its popularity rapidly increased, in part due to the tree being virtually thornless. The University of California lists 14 types of Eureka lemons. Depending on the source, Hawai`i seems to have a few of these: Old Line, Frost Nucellar, Allen-Newman and the Variegated Pink-Fleshed Eureka. The pink came from a shoot from a regular Eureka prior to 1931 when budwood was distributed. Pink Lemonade Eureka has become very popular in Hawai`i over the past 20 years.

Perhaps the most popular commercial lemon next to Eureka, its relationship to Hawai`i has always been marginal as it produces much better in cooler areas. The trees are more cold tolerant. The tree is most productive in California. Thick foliage better protects fruit from the sun. The thorns are considerable. The yield is about 25% greater than Eureka.

There is some disagreement as to the origin of Lisbon. What is known was that seeds were sent Portugal to Australia in 1924. The name Lisbon is not used for the lemon in Portugal. It was listed in nursery catalogs as early as 1843. It was introduced to California in 1849 and again from Australia in 1874 and 1875. Although continuously imported to Hawai`i, Eureka seems to be more popular. The University of California lists 12 types of Lisbons.

There are hundreds of other lemons around the world, which have not made their way to Hawai`i. With citrus greening disease (HLB) in many locations around the world, it’s doubtful many of these will ever come to Hawai`i. Lemons and lemon hybrids like Sicily, Femminello, Genova, Monachello, Perrine, Marrakech, Pear, Galgal, Karna, Sanbokan and Snow should be found in HLB-free areas or tissue cultured and given a chance to thrive in Hawai`i’s microclimates. Each of these unusual varieties represents a potential for niche marketing as fresh fruit or in value-added products for Hawai`i’s agriculture entrepreneurs. 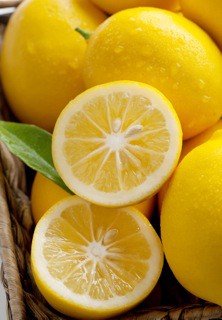