Amidst the well-assembled sprawl of eco-friendly goods at Whole Foods Market, Maui, we caught a glimpse of the amusing banter between Amanda Corby and her two-year-old, Elee. Freshly arrived from Oahu, Corby and her family are en route to a cultural retreat in Hana to plan for a culinary festival slated for next year. The weekend has much in store for the family—hunting, fishing, and catching river prawns.

But at the moment, Elee is picking her fruits and weighing in on milk and snack options in her adorable two-year-old vernacular while busily munching through the grocery aisles. And Corby is thoughtfully engaged, navigating between our interview and shaping Elee’s budding preferences—encouraging her to pick the local strawberries over the imported ones, counting exactly how many clementines are needed for the weekend and leisurely sampling the cheeses by the deli (for Elee, goat cheese rules and the stinkier, the better!). In the end, both of them agree on what ends up in the cart.

“Family first is always our motto” 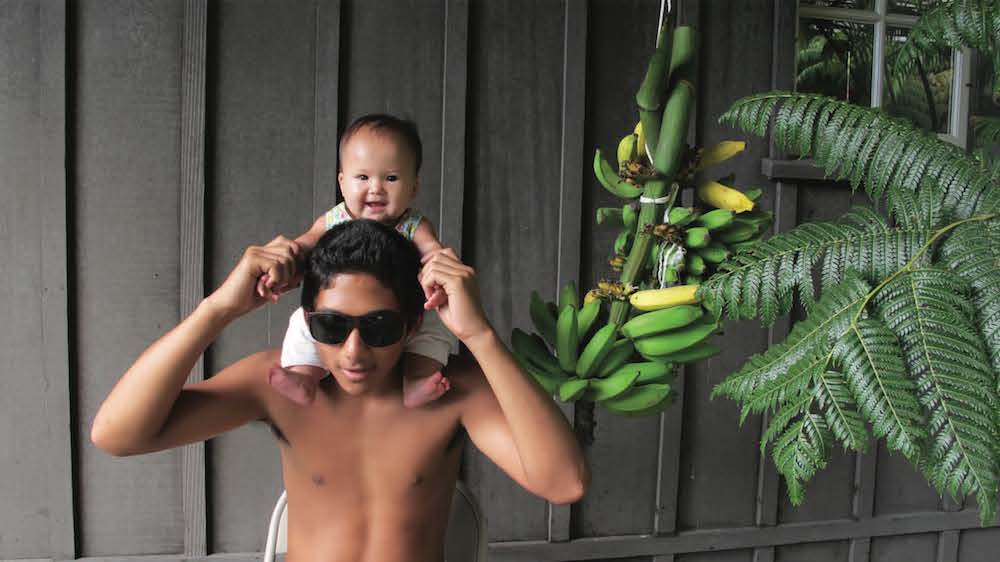 Corby is no ordinary individual. She is a communications guru, a community and local food advocate, and, more recently, a wife and mother of two beautiful girls. In 2009, she launched Under My Umbrella, a public relations, marketing and events firm. She is also a founding member of Hawaii Food Policy Council, an advocacy group committed to affecting positive changes in our local food system through education and legislation. The Pili Group, a catering company that highlights Hawaiian culinary traditions and responsible, place-based sourcing, is a fairly new endeavor with her husband and celebrated chef, Mark “Gooch” Noguchi. “That was Mark’s and my first baby,” said Corby. Since starting The Pili Group, they’ve also launched LunchBox, which provides locally sourced and healthful meals for Hawaiian Airlines employees, and opened the doors to their Mission Social Hall and Café at Hawaii Mission Houses Historic Site and Archives in Honolulu.

These milestones are not meant to be a measure of what “having it all” looks like, but it wonderfully captures how Corby thrives, how life organically evolved as her ohana, tribe and passion projects expanded. “Our life is going to be full of adventure and they might as well get used to being part of the adventure,” said Corby.

“Family fi rst is always our motto but making them be a part of our work is the best way for us to do that. We get to spend quality time with them. When it’s an event, and I can strap them on and run around with them, everything turns into a game. Whether it’s making food or setting up for a 700-person event, there is always something they can do to help.”

Motherhood awakened in her a sense of simplicity. “I was joking with another mother that (the time) in the hospital after I had my children felt like almost a vacation because it was the most quiet and calm that life had been,” said Corby. “We are used to being on the go and I found birth to be the most quieting ever. No one is expecting anything of you. You just gave birth and that is enough.”

Born and raised in Springfi eld, Missouri, she drafted her fi rst business plan for her parents on why it was more fi nancially feasible for her to move to Hawaii for college because she would support herself by working a restaurant versus staying home and asking for their help. Her parents were convinced and that’s exactly what happened, which sparked her passion for food and hospitality.

With much to juggle on the daily, she gives a world of credit to her business partner and best friend, The Pili Group’s Mariah Gergen, for being an honorary parent to her daughters. “First, I have an amazing husband,” said Corby. “But I also have a wife, Mariah, my best friend for 20 years. It’s the fi rst trip she hasn’t been with us because she is running a 300-person wedding. Our parenting is in thirds. I’m very much like, ‘I can do this’ and I’m very stubborn. And, again, after having a baby, I learned to put down my ego and say, ‘I need help in doing this.’ All of us learned together.”

Shortly after The Pili Group was founded, Corby was pregnant while they were launching TASTE in Kaka’ako, a pop-up restaurant model, which closed in 2013. “We spent a lot of time in the kitchen, whether it was talking about menu planning or marketing,” she said. “Once she was out of the womb, if she was fussy, we would bring her to the kitchen—anyone’s kitchen—and the humming, buzzing and clinking of pans would calm her down.”

Like daughter, like mother—working in the kitchen at home is also calming for Corby at the end of the day. “Being a new mom, loving cooking, and having our two businesses and a new baby, cooking is my stress reliever, my meditation,” she said.

As soon as Elee was able to sit on a Bumbo (a soft, contoured chair that provides support for babies), she would watch Corby make dinner. So at the tender age of two, the miniature chef has plenty of kitchen experience and even uses a pan scraper to help cut sweet potatoes, kalo, ‘ulu or bananas to make her sister’s food. At her preschool, Elee loves to help with snack time, lunch and gardening, like a true Corby-Noguchi.

“She loved watching me slice the vegetables and I would hand her things,” shared Corby. I continued doing that with her until she was old enough to stand. And now, she has this stool that she’ll stand on and say, ‘don’t help me.’ Her favorite thing that she makes is eggs.”

She adds, “I try to incorporate them into everything I do because then they’re engaged and entertained and not getting into trouble. I can’t imagine cooking and trying to watch them in the living room at the same time. It was just what I was doing by default to try to survive. And now, with the second baby, it’s such a lifesaver. And Elee loves to make food for her sister and she knows where food comes from.”

There is a joke at the preschool that Elee does this funny thing where, if she eats anything with meat, she makes the sound of the animal she is eating. “And I’m thinking, what’s funny about that?” said Corby. “She’s identifying. I don’t want to be the parent of the kid who is seven years old and realizes that bacon comes from a pig and turns into a vegetarian. I don’t care, I was a vegetarian for 20 years, but I want it to be a choice not because she’s freaked out by what it is.”

Her conscious practice to allow the little ones to experience much of their work life has proved to be emotionally fulfi lling. “It allows Mark and I to live the life we want,” said Corby. “We feel that we don’t have to sacrifi ce the way we live. Sure, we don’t get to go to three-hour dinners and drink bottles of wine, but we can still make dinner at home and it might be simpler and move a little faster so they can get to bed on time. But for the most part, we still do the same things, but just as a family.”

Pili means to connect or be intertwined. Just like words are woven together to create beautiful poetry, Corby’s family, work, and passion are all intertwined to create a beautiful mosaic of motherhood that is joyfully driven to nurture loved ones, uplift the community and share a thoughtful, elevated and delicious experience with friends along the way.