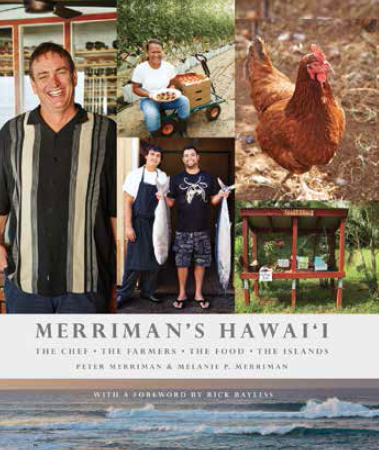 The first time I met Peter Merriman was in 1993 during my first trip to Hawai’i, a place I’d never had on my radar. To my then unschooled mind, Hawai’i was just one big Cancun, and I’d never much enjoyed going to Cancun. But I’d been invited to an important chefs’ summit on the Big Island. So I packed my bags. I should of packed tremendous expectations too, because I landed in Kona’s tiny airport and stepped into a magical land that, to this day, holds a place of exotic wonder in my memory.

Perhaps I said hello to Peter at the conference-I know he was the muse behind so many of the thrilling experiences and tastes I encountered over the next few days I was there -but I honestly don’t recall. I was too infatuated with the fishing expeditions, the cooking demos and the luau hosted by the taro farmers in Waipio Valley.

No, it wasn’t until I drove from the Kona coast where our summit had taken place, up the road to Waimea to Merriman’s restaurant that I felt I really met Peter. I really met him as I tasted plates of stunning local opah and ono gilded with freshness of island herbs and tomatoes and greens–ingredients that all the hotel chefs had said had to be brought from the mainland. I basked in Peter’s effervescent enthusiasm for the beef and lamb from a nearby farm and the engagingly ripe fruit that had been delivered by an old hippy homesteader he’d met somewhere along the way.

Long before anyone had coined the phrase “farm-to-table,” Peter saw the true possibilities in Hawai’i’s land and in the people that surrounded him. All these years later, those nascent possibilities have blossomed into everyday pleasure for so many, and Merriman’s in Waimea has begotten seven more opportunities for folks to enjoy delicious food that celebrates the bounty of Hawai’i’s islands and those who so beautifully craft that food.

As I leaf through the inspiring pages of Merriman’s Hawai’i, my only regret is that all this vivid deliciousness remains a half-day plane ride from Chicago, where my home fire burns.