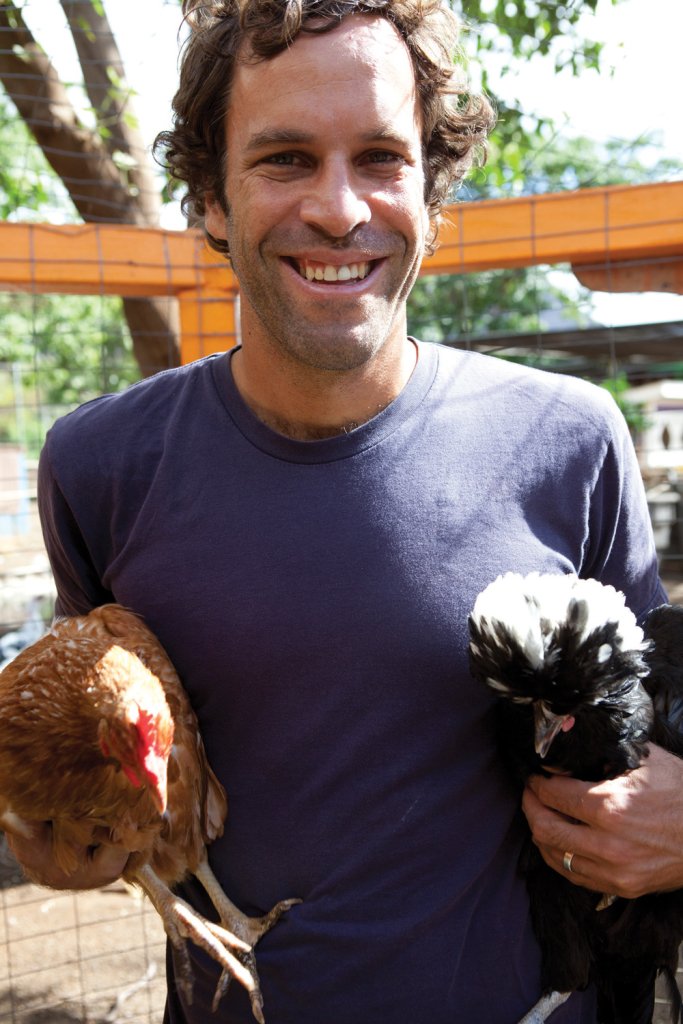 With two hands in his backyard garden, trimmings in a pile and happy as a clam, Jack Johnson begins his two-month hiatus from touring the globe as a musician (a promise he made to his wife, Kim), doing exactly what he plans to do: cultivating edibles while spending some QT at home with his family.

In every sense of the word, Jack Johnson is cool. Born and raised on the North Shore of O‘ahu to modern surf legend Jeff Johnson, he became the youngest invitee to make the surfing finals at the Pipeline Masters at 17. Within a week of the contest, he was recovering from a near fatal accident in the water and swiftly developed a passion for guitar. He and his then-girlfriend, Kim, wrote songs in his UC Santa Barbara college dorm room as he earned a degree in film and she, in education. Jack credits Kim with nearly every achievement, from managing tours and selling more than 15 million albums worldwide to topping the national U.S. Billboard charts three times to co-founding and running the couple’s nonprofit Kōkua Hawai‘i Foundation – which aims to help protect the environment and educate the next generation of stewards of their island home, Hawai‘i.

Where did the passion stem from to create Kōkua Hawai‘i Foundation? Why does it matter?

If I go back, everything I do has stemmed from a partnership with my wife Kim since we were 18 and met in college. We were always together at that point, and anything one of us was working on, whether it be homework or trying to write a song, the other was giving input. A couple of years into the music career, when Kim had taken over as my tour manager, we saw that we had the potential to draw a lot of people together to raise money and awareness about an important cause. Inspired by friends like Neil Young doing the Bridge School benefit concerts, we thought “what else can we do to help?” We combined our background and interests – she as a teacher and me as a former camp counselor – and created the foundation with our friends. We support farmers markets, give healthy snacks in the schools that are locally grown, run farm visits and teach kids that by eating food that is sourced nearby that is so fresh and so good, you can do something good for yourself and do something good for the environment. It really just came from being inspired to help Hawai‘i. You look at the statistics and think that if you can start at a really young age and help them learn about what’s good for them – and make it fun – they will grow up seeing this as a positive experience. 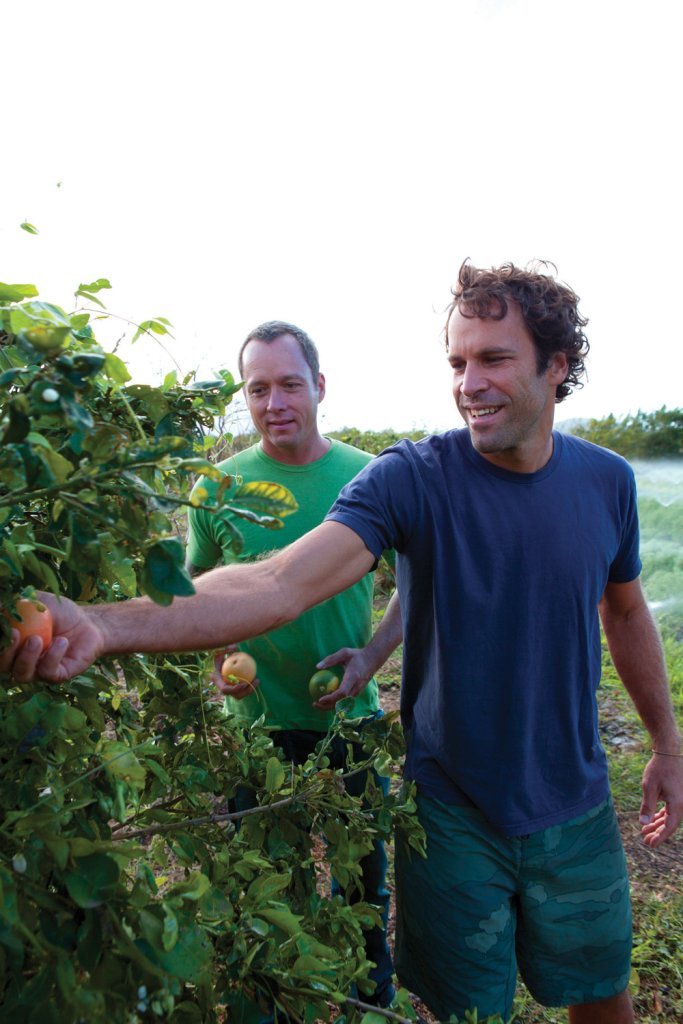 Tell me about a memorable moment for you while building this program. How do you know when it’s working?

Yesterday I was teaching a garden lesson – “the scientific garden” at my kid’s school. The class was separated into four groups, each with their own gardening plot and soil composition (e.g. regular soil, mulch, precast), all planted with green beans. It was the last day of the lesson and we were comparing and contrasting results and the kids were just having so much fun, laughing as they were discovering the differences. These days, the negative about the future of our planet is poured on – we really want to take a positive, fun approach- then as they grow older it’s something they want to return to.

As soon as they have fun you know they’ll start learning. I remember one of the first times in the schools when we were developing a curriculum for nutrition and garden-based learning, using native and canoe plants. When we first started doing the lessons, the kids were digging for bugs. One kid found a huge centipede, which threw the whole direction off but then gave me a great chance to improvise, because now I’m talking about worms, centipedes, decomposers and how they all work together in the garden. Everyone’s squealing “ewwwww!” – but they’re having fun. These are the great, real learning experiences.

What is the future of food sustainability in Hawai‘i? How do we compare with some your worldwide tour communities?

We used to bring one person along with us on tour as the head of our catering, while most bands bring out a full staff with pre-planned meals. Our person would be in charge of the local catering. Everything would have to be sourced within a certain distance of where the venue was, so they would find the local farmers market and create a menu. We don’t have to do that anymore because every town we go to has a great group already doing this work; caterers sourcing locally from farmers markets. Awareness of local farmers has really grown over the years.

The tricky part for Hawai‘i (in terms of the future of food sustainability) is tourism. It is a powerful industry. So many people want to visit and a lot of land that should have food grown on it is under pressure to be rezoned and developed. Something I always try to say when I’m asked by local tourist magazines about how visitors can be more environmentally friendly is to support local farmers! If you are stocking up your fridge, store up at farmers markets. A lot of tourists just don’t realize that we import everything. Let’s reframe the tourist industry: if you really want to experience Hawai‘i, taste Hawai‘i. 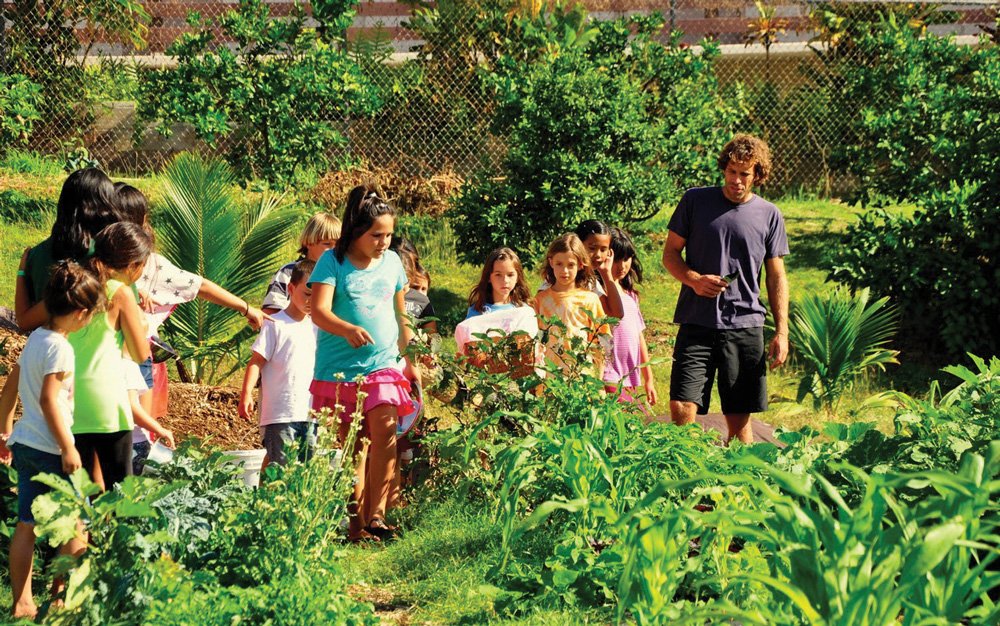 If we separated processed foods from fresh, locally grown foods – do you think we would still consume 85 percent imported?

No, I don’t think so; I see such a growing number of people interested in supporting farmers markets, and I see those farmers markets popping up more and more.

Best case scenario: more people are growing food on their own property – and it doesn’t even have to be about the number of plants or acres, just that it’s happening in more households; that more people are opening their minds to the fact that it can be here. More farmers markets, direct to consumer. More food being grown.

How can the Kōkua Hawai‘i Foundation help make that happen?

As the kids in our school programs get into high school, they start to take action – the greatest action you can take- by making environmentally conscious decisions about their food choices. Our friend Ed Kenney, who is on our board, brought the idea to our attention to work together with kids at different stages of their development. He works with MA‘O (an acronym for “Mala ‘Ai ‘Opio,” which means “the youth garden”), using the produce in dishes at his restaurant (Town) and supporting their fundraisers. Together, we’re getting more locally grown food in Hawai‘i, impacting health, economy and environment, and getting more farmers on land that might otherwise be lost to development. 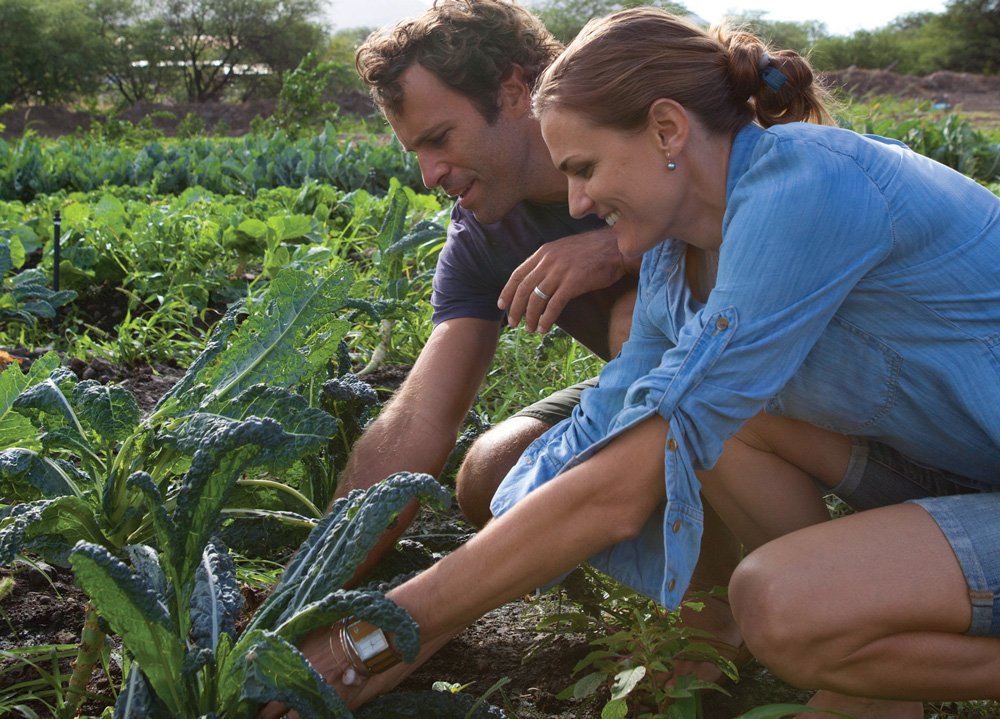 And as for you, where do you take the family to eat on a night out?

Last night we ate matzah ball soup – some Jewish friends had us over and we learned about Hanukkah. On special occasions we love to eat at Town or at Kalapawai Caf. & Deli in Kailua, for my sister. There is so much good food there, risotto, desserts, root dishes, beets; everything is locally grown. We love taking the kids to Luibuenos for Mexican food. For a long time I had my kids convinced that the picture of Elvis on the wall was Luibueno and he was going to come out and sing songs about his burritos.

How do you plan to spend your first break in two years?

Except for a board meeting that I have in a few minutes, I’ll just be surfing, spending time with the family and catching up on gardening. Because of the last 15 years of my music career, my garden always goes to weeds while I’m away and I just want to focus on my garden. I want to see this thing come to fruition.