DORA IS STRINGING YELLOW ‘ILIMA with a long lei needle, one she says she was born with in her hand. She sits behind a fold-up table at a lei stand beneath a sign bearing her name outside the Honolulu Airport. Along a strand of similarly christened lei stands identical to Dora’s is Sophia’s, Arthur’s, Martha’s, Irene’s and about a dozen more, all with their full rainbow of aromatic goods on display.

The original Dora is her grandmother, ninety-six years old and still making lei. She began the business at age fourteen, selling from Aloha Tower and later moving to Keehi Lagoon Park. Then came another Dora, Dora’s daughter, or Dora’s mother, depending on which you’re talking about. That Dora had fourteen children and supported them all with lei making. One of those children is coincidentally the Dora that currently runs the lei stand, who herself has been stringing lei for sixty years, and who has taught all of her children, and now grandchildren, how to make lei.

The history of lei making is the history of humankind. Neck chains of shell and bone have been discovered in the most ancient of human graves, suggesting that the primitive man may too have felt compelled to adorn himself with attractive elements of the natural world. If this is true, lei traditions have been around for 17,000 years.

It is perhaps because the people of Hawaii have for so long perpetuated the practice of making, wearing, and giving lei and with such ardent spirit that it has become the epicenter of modern lei culture. Lei can be used for any occasion that involves flowers; weddings, graduations, funerals, a gift for the hostess or for a date to the prom. It’s entirely acceptable to buy a lei for oneself or to wear one for no occasion at all. Men wear lei as casually as women, always draped over the shoulders, never hanging directly down from the neck. One should not refuse a lei, nor present a closed lei to a pregnant woman due to the taboo that it is bad luck for the unborn child.

Lei can be made out of much more than flowers. The Hawaiians of old would make a lei out of anything; cloth, shells, boar’s husk, nuts, seeds or feathers, also fresh materials like berries, fruit, or vegetables. The grandest, most chiefly lei was made of human hair and ivory.

In caring for a lei, most will do well in the coolness of a refrigerator or wrapped in damp newspaper or paper towel and placed where it is shaded and breezy. To properly dispose of a lei, simply return it to nature, being mindful to remove the natural material from the string; not all lei stringing is decomposable. 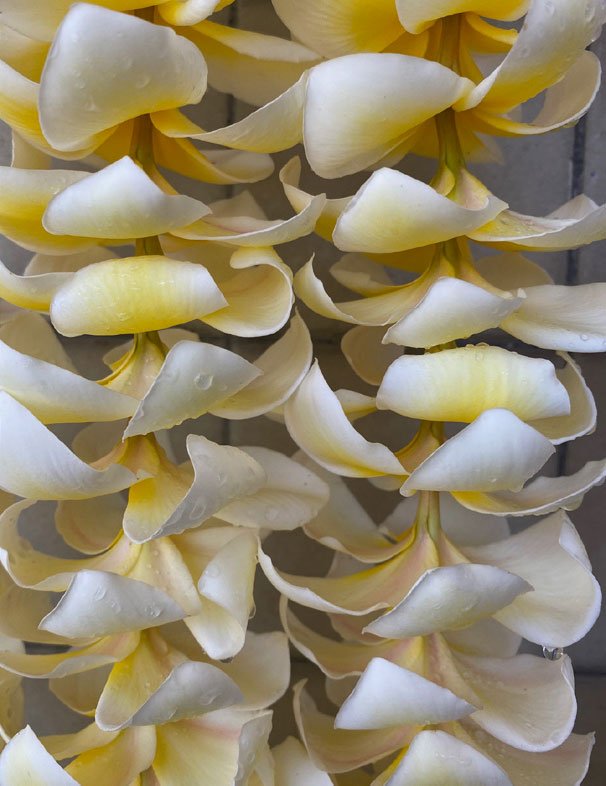 While in old Hawai‘i, materials were gathered entirely from the immediate environment, and in more recent times, flowers were grown in backyard gardens and harvested to string and sell, the business of lei making is changing. Purple orchids from Thailand are imported to Hawai‘i en masse; they’re cheap and wilt slower, a huge bonus when working with such delicate, perishable goods for such little profit to begin with. Also, new generations are finding that it’s easier and better paying work to find a job doing almost anything other than growing and selling backyard flowers to lei makers.

“I like making double carnation, no one makes that anymore,” says Dora, “Vanda leis should be treasured now. Gardenia are so hard to find, most people now don’t even know how to string them.”

Dora gets most of her flowers from vendors that come to the lei stands at the airport once a day, but there are still people like “Mama” who approaches her with plastic bags strung along both her arms. She is probably closer to the age of Dora’s grandmother than to the age of Dora herself and she catches the bus from Wahiawa everyday, transferring two times, to sell bags of flowers grown in her backyard and in the backyards of her neighbors to the lei makers of the airport. Dora greets her warmly, buys one bag for $15, and “Mama” moves down the line of stands.

Dora is optimistic: “I don’t think there will ever be a time when all the flowers will come from elsewhere, people plant their own to keep costs down,” she says, “I take my little grandkids and gather when I can, it’s part of the culture.” When asked where she goes to pick her flowers, Dora smiles and points ambiguously, “The mountains,” she says.

And yet, there is now constantly a great shortage of many of the flowers traditionally seen on Hawaiian lei. Flower availability depends on the season and who’s growing what locally. The phone inside the stand rings and Dora answers it, asks, “How much do you need?” then laughs hard and says with sincerity, “Good luck!”

Though I am not an invited guest, and I’ve offered her nothing, before I go, Dora pulls a gardenia lei from inside the stand and ties off the ‘ilima lei she’s been stringing all this time and says, “Here, I have something to share with you,” and gives me both. And in that one gesture, she explains to me the enduring lei culture of Hawaii. [ eHI ] 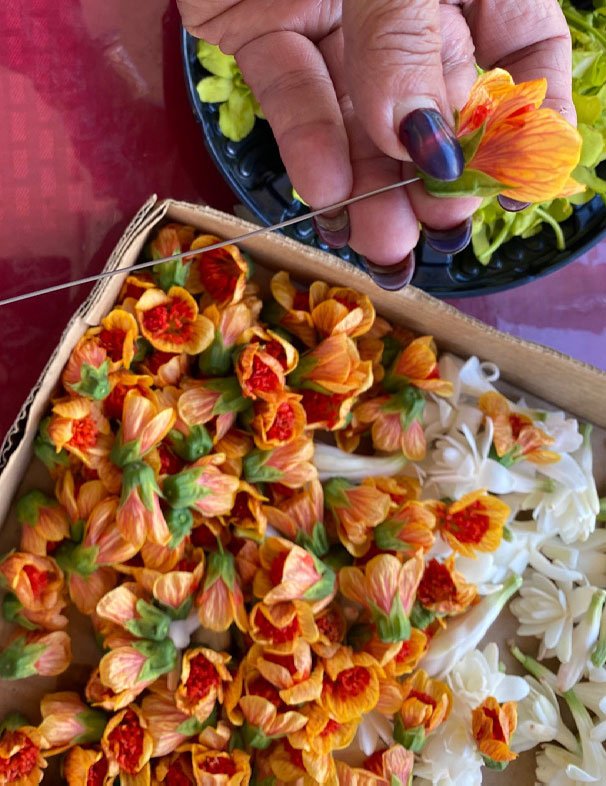 Each of the eight main Hawaiian Islands is associated with a different lei based on the prevalence of materials naturally found there. The colors of these distinct lei have also become symbols for the islands, used in such ways as the gowns of the island princesses on Lei Day.