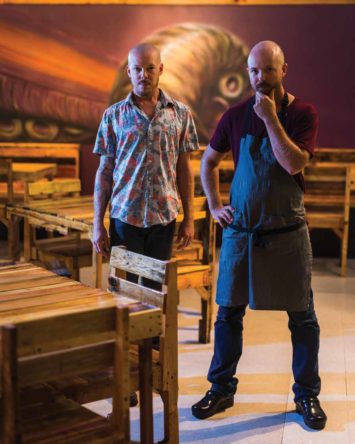 Kapaʽa was said to have lost a piece of its history when it closed its doors to the century-old Kojima Store; after five generations of family operations. A Kauaʽi landmark, the Kojima Store began as a family business first in Wailua, then moved to Waipouli and finally settled in its current location on Kuhio Highway in Kapa’a. The store back then was a 1-stop-shop selling clothes, hardware, feed and even grave monuments. Known for it’s convenient location, family focus, affordable prices and local food such as, grass fed beef and it’s famous Korean style short ribs the store endured until it shuttered in June 2014.

Since the June hiatus, Glenn Kojima, son of Henry Kojima, one of seven children of the original owners, Eiji and Okono Kojima was introduced to a new business named Hanai which would continue a business in this building that supported the local community and families but with a renewed focus was a generational gift. Hanai has had previous success across Kauai in the  community highlighting locally sourced food and drink with their ever-popular events.

Hanai is a natural fit for bringing a pulse back into the lifeless building.  The foundation was in place for new owners, Chef Adam Watten and Creation Director Collin Darrell, to continue what was the heartbeat of a small community but with new offerings. Hanai, which in Hawaiian means to adopt, take in, nourish, sustain and to be close. Their intent is to feed and educate the community through a farmers’ market, cooking classes and prepare food in a restaurant that is focused on locally foraged, delicious food.

Originally from the Shenandoah Valley in Virginia and formally trained at The New England Culinary Institute, chef Adam Watten continued training at some of the country’s top restaurants in Washington D.C. and Portland Oregon before arriving on Kauai in 2009 to open Red Salt at Poipu’s Koa Kea Hotel. “What the Hanai space previously meant to the people and to the generations before needs to be kept in this community,” remarks the chef, “with both the restaurant and the weekly farmers’ markets we have planned for the spot, the concept plans to give farmers and producers another venue for their goods selling directly, becoming a part of the menu and having the opportunity to rent kitchen space.”

With a vision to create a place of integrity extending through ingredients, education and support of the community, the Hanai menu is sourced 100% from Hawaiʽi with a focus on Kauaʽi. Execution is inspired by mentors, experiences and a palatable sense of the “present.”

“I love to nourish people,” responds chef Watten when asked why he does what he does, “I like to make people happy with my hands and to be playful; it’s a great creative outlet, and it’s a lot of fun. My style has evolved throughout the years, coming from a traditional, formal cooking background that was very regimented to eventually wanting to just showcase each individual ingredient and the best possible way to enjoy it. A lot of my technique has become about ‘how to make it work.’ I like to cook simply, yet properly.

“As in the old days, from land and sea, (chef) gathers what is fresh and available, and with a devotion to excellence, plans the daily menu of edible masterpieces!” says Glenn Kojima, “He sources local farmers and fishermen and oftentimes does his own gathering. Traditional and time tested  techniques, (curing, smoking and fermenting)  are also used to create, flavor and preserve ingredients.”

“The ability to produce here is unmatched,” says Watten, in comparison to his culinary training grounds, “growing season is all year. The variety and abundance of crops, fish, cattle operations- it’s all here. The potential to develop a cuisine inherently of this place is something I feel really strongly about. The beef dish below emphasizes reestablishment of a local source (with Wailua ranchers Sanchez family farms) and a market concept; exemplifying how we base our menu off of what is available right now, creating different lines of value added product, eliminating waste and speaking to the very traditional attitude of this community.”

With this approach, Hanai aims to inherently become different, and therefore more attractive to their present day consumer. Menus are healthy, made from scratch (no flour, no cooking oil, fats rendered from animal or vegetable or extracted coconut or avocado oil), local (with no flour or wheat in the state, expect plenty experimenting with alternatives like kiawe flour) and speaks to the island the ‘way it is right now.’