At the heart of Maui’s breadbasket, the local hardware store serves as the rural area’s modern-day hitching post. While propane tanks are filled, advice flows freely and stories are swapped by folks wearing boots, denim and the occasional cowboy hat.

This is Kula, where the postal clerk knows your box number the moment you walk through the door. It’s a place where neighbors usually know each other; a hometown where just-picked lettuce, corn or even watermelons might mysteriously show up on your doorstep during harvest time.

Hundreds of acres of fields grace the gently sloping flanks of Haleakala, ranging from cooler temperatures at slightly higher elevations to scorching hot tracts in lower Kula where cows cluster to rest under the shade of scraggly kiawe trees.

Kula farmers, many of whom have worked the same parcels of land for generations, produce bountiful crops synonymous with Kula’s fame: netted bags of sweet onions, pallets of cabbages, fields of fragrant tuberose and boxes of field-packed zucchini.

They diligently push forward with their agricultural pursuits despite a myriad of challenges both natural and man-made, including rainstorms, drought, deer invasions, whiteflies, thefts of equipment and tools, even the overnight theft of an entire field of zucchini waiting to be picked the next morning. Ironically, the vectors that made the headlines recently – slugs and snails – are not on the list.

“We are constantly scouting for issues in the fields,” says Justin Teixeira, co-owner of J. Tex Farms. “We keep the soil clear of debris, and take preventive measures so there are no shady areas where pests would gather.”

Justin adds that Federal food safety standards already require numerous controls, so their careful monitoring of the fields is an extension of that surveillance. Justin and his wife Jeanna, who are raising four children while managing nine full-time employees and nearly 100 acres of zucchini, tuberose, plumeria, cilantro, onions and other crops, know every inch of the land they farm. Maintaining water lines requires them to make a daily check on the entire perimeter of the fields, since axis deer and feral pigs can turn even the smallest leak into a refreshing oasis by biting into the line.

At the farm’s 1,400 foot elevation everything needs to be watered, and water bills for ag-rate water easily top $6,000 a month. Yet despite all the obstacles, they have poured their heart and soul –and earnings– into expanding their farmlands for one main reason: Pride. 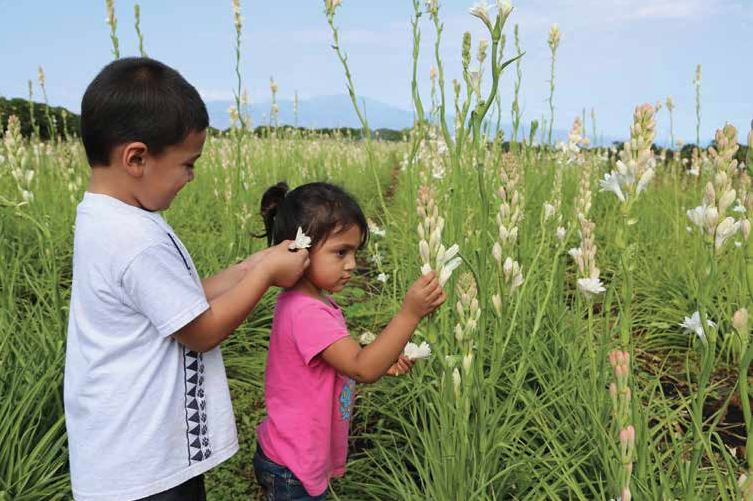 “Every time we walk into a grocery store and see our products on the shelf, even way out in Hana or on the neighbor islands, there’s a strong sense of pride,” Justin says. “It feels good to know we’re replacing the imports when we see our zucchini for sale. It’s worth all the challenges.”

The reality is that labor and other costs have risen — even the price of the cardboard boxes used to pack the zucchini has gone up — while retail prices have remained relatively flat. Still, Justin and Jeanna are quick to point out that they manage to increase yields by employing more efficient farming techniques. Technology, coupled with their tenacity and the support of family and friends, has played a major role in their ability to grow their business. “It seems like just yesterday that we had literally nothing, just a large garden in Ha‘iku,” Jeanna says emphatically, while corralling a lively puppy and her preschooler with muddy pink sneakers in the back seat of their pickup truck. “I’m so proud of how far (Justin) has taken this, and we’re still expanding. He truly loves what he does.”

After leaving the military at age 24, Justin used his Air Force money to buy a tractor to start farming cucumber and daikon on the weekends. Today, his first-grader son Levi helps him load a few boxes into the walk-in chiller to keep the zucchini crisp while awaiting transport. Next stop is the digital weather station they installed, with real-time updates on rain, wind, humidity and other factors that provide critical feedback for their crops and those of nearby farmers with whom Justin has shared the login and password… a high-tech version of being a good neighbor.

Commercial farmers in Kula have had a long history of looking out for one another, and in recent months, that support system has become even more vital as news reports about recent cases of rat lungworm disease* (RLWD) created a backlash against locally farmed produce.

Stemming from very serious health impacts suffered by a relatively small number of patients who likely contracted the illness in wetter areas of Hawai‘i Island and Maui, and fanned by the flames of social media, fears of contracting the illness ballooned into full-blown hysteria. Orders for local produce plummeted, and farmers and processors were left wondering how they would pay for their water bills and loans for new equipment. Distributors were caught in the crossfire, trying to fill orders with mainland produce that was often in short supply, and sometimes afflicted by its own food safety issues.

“Mainland produce is by no means any safer than locally-grown, and it is certainly not as fresh,” says Warren Watanabe, Executive Director of the Maui County Farm Bureau. “There are any number of possible food safety issues no matter where the food is sourced, and while farmers, processors, distributors, retailers and restaurants all take precautions, we still need to be washing all of our raw fruits and veggies – regardless of where they came from.”

The agencies that gathered in response to the RLWD panic shared the Farm Bureau’s sentiment, including the Department of Health, the University of Hawaii, the Mayor’s Office and the Maui Invasive Species Committee (MISC), which has posted a slug reporting form online to gather data.

“Years ago I was doing outreach and talking about the issue of food safety at schools, with community associations and other groups, but few people had heard of RLWD,” says Abe Vandenberg, an Invasive Species Field Coordinator for MISC. “People were like ‘Really?! How have I not heard of this before?’ even though cases had been reported on the Big Island. It can be a fine line between awareness and fear, and it’s interesting how news cycles affect an issue when one explodes into viral mode. It’s like the perfect storm of events and information, and if the message is not the right one, fear can be the result.”

While the parasitic nematode that causes RLWD has likely been in the islands for many decades, if not a few centuries, recent cases have received widespread attention in the media. Besides serving to educate the public on how to avoid ingesting the parasite, factual information will also be the key to managing this agricultural crisis that threatens the survival of local farms. For those whose primary concern has always been food safety– Maui County’s commercial farmers and ranchers– steering consumers toward facts and away from fear remains a daunting and time-sensitive task.

“By indirect association, our farmers were implicated during the recent RLWD incidents, despite the fact that they already had slug and rodent control measures in place on their properties,” reports Mae Nakahata, Maui County Farm Bureau Director. “Food safety does not end at the farm; it is needed through the entire chain of transportation, storage and finally the consumer. It’s important that everyone understands their role in food safety, even when using products from their own backyard.”

The University of Hawaii’s College of Tropical Agriculture and Human Resources (CTAHR) has been holding numerous workshops and informational sessions for backyard growers, as well as for commercial farmers and members of the public. Other efforts to provide education on the importance of food safety have been undertaken by the Department of Health’s Maui District Health Office, which is also working in partnership with Bishop Museum to conduct testing of snails and slugs sampled from various locations throughout Maui County.

Collection, testing and data analysis are ongoing, and officials say reports are being assembled for release soon. In the meantime, Maui’s District Health Officer Dr. Lorrin Pang encourages everyone to be vigilant, especially if they may have traveled overseas or to higher-risk areas in East Hawai‘i Island or East Maui.

“Take note of any practices, whether intentional or unintentional, where raw slugs, snails, freshwater prawns, frogs or crabs might have been consumed directly or indirectly,” Dr. Pang says. “The public and physicians should watch for the following clinical symptoms: mild to severe headache, stiffness of the neck, tingling or painful feelings in the skin or arms and legs, low-grade fever, nausea, with or without vomiting; sometimes light sensitivity or a temporary paralysis of the face.”

What’s perplexing about RLWD is the fact that while some patients suffer from severe symptoms, others experience mild symptoms or even no symptoms at all. While the illness must not be taken lightly, the bottom line is that consumers, grocery buyers and chefs must fight paranoia with simple precautions like washing produce, while local commercial growers continue doing what they have always done, attending to crop safety to maximize production of nutritious, farm-fresh fruits and vegetables.

Up at Waipoli Greens, co-owner Geoff Haines is measuring and marking lines on freshly covered ground where new hydroponic beds will soon be installed. With 16 full-time employees, crops produce 10-12 growing cycles per year with harvests every 4-6 weeks. It’s a nonstop, 24/7 operation that comes with its own set of variables that affect production, including birds, deer and hungry wild pigs. Yet Geoff laughs as he describes how the company has survived the past ten years, due to his business partnership with agronomist Dr. Paul Singleton.

“It’s been a combination of his brains and my persistence,” Geoff says with a broad smile, dusting off his hands on his jeans. “Paul has excellent business acumen and knows plants on a molecular level, and I have a lot of practical experience in farming operations. But the main requirement of farming is having extreme patience!”

Their patience has indeed paid off, illustrated by brilliant rainbows of lettuce and vibrant green strands of watercress thriving in raised rain-gutter beds. The scent of a nearby Eucalyptus forest fills the air, and the tranquil sound of trickling water creates a spa-like atmosphere that is punctuated only by the honking of a startled pheasant taking cover nearby.

Here, as in many other commercial farming operations, every aspect of cultivation is documented. Crop damage caused by birds or bad weather is tracked and dated, and slug baits are distributed at the base of the raised beds’ support frames as an additional precaution. Lettuce is picked and packed so quickly that the leaves are still adorned with the morning’s dewdrops. Heads with even minimal signs of damaged leaves are tossed into the compost bin instead of being sent to market, yet another safeguard and a hallmark of the farm’s dedication to science, safety and quality.

Crop Production Manager Bryan Davis speaks with satisfaction about how their hard work fills a need in the local food supply.

“It’s really gratifying to be able to provide for the community,” he says quietly, his demeanor offering a glimpse at his crew’s dedication.

Bryan’s outdoor “office” features a panoramic view of Central and South Maui, perhaps another reason employees seem to enjoy coming to work. The patchwork quilt of Kula’s fields and pastures are framed by the narrow and often steep roadways that carry the farm-fresh bounty to town.

Yet the future of this pastoral view, and of our islands’ sustainable food supply in general, will rely on each consumer’s commitment to being well-informed and taking a common-sense approach to controlling pest populations and washing produce properly. As local farmers care diligently for their crops, so must each one of us care for our food.

Writer and photographer Lois Leinani Whitney spent her childhood in the pastures and farmlands of Kula. Her father, Dr. A. Sheldon Whitney, was a research scientist with the University of Hawai‘i who studied nitrogen fixation to help developing countries grow self-fertilizing crops; he also helped launch the NiFTaL project at Hamakuapoko.