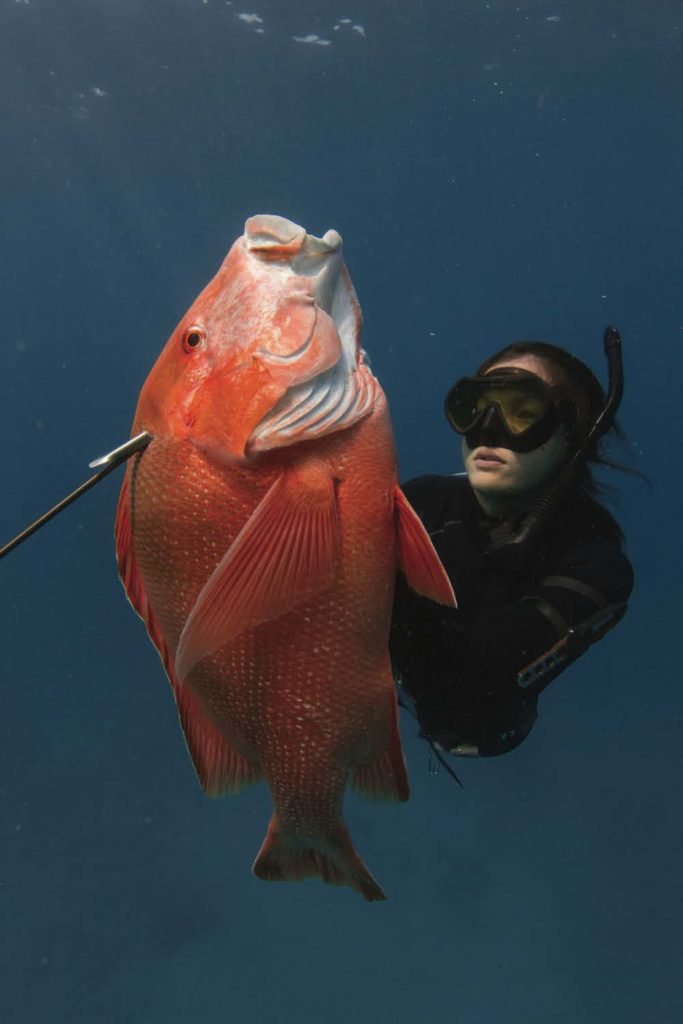 To know Kimi Werner is to know her relationship with food, nourished from childhood with the mantra “Gather, hunt and share” to support herself and those around her. It is this practice that has led her time and time again to the deep blue abundance of the ocean and continues to frame the life of this woman, chef, artist, inspirational speaker, international spearfishing championship winner, and so much more (also known as the girl who swam with the great white shark!).

Kimi believes a healthy relationship with food is about awareness and responsibility- a commitment to understanding what it took to get that food to your plate. “A hundred years ago, when eating a meal, there was a basic understanding of where the food came from, whether you helped in the harvest or knew the source,” Kimi explains. “In the modern world, we are so caught up with convenience, easy and fast, that people are disconnected from where the food came from and the process that it went through to get to your plate. Having knowledge of where your food came from elicits a connection to that source. Without that, you are depriving yourself of a beautiful satisfaction.”

Take a dive with us into how this inspiring woman leads by example and reaps the rewards, both above and below the sea.

As a young child, Kimi remembers growing up on the remote north shore of Maui, knowing little other than family and nature. She helped out by gathering food from her surrounding environment; she collected chicken eggs and picked plants, but her favorite form of foraging was going into the ocean with her father. When she turned five, she was deemed old enough to accompany him on his adventures.

Kimi’s passion for food grew from the hard work, satisfaction and love of harvesting. “Understanding the true source of a meal is rewarding. From my earliest memories, I had connection to the food we ate because I helped with the process of gathering it. This process is interesting, educating and rewarding.” But it wasn’t until much later in life that she learned how to harvest fish from the sea with her own hands.

At the age of seven, Kimi’s life dramatically changed as her family transitioned from the remote countryside to the suburbs. With her parents making more money they could now afford to provide a “civilized” upbringing in a developed neighborhood, following the blueprints of a new way of life. Although it was considered progress, there was an inherent sense of loss as she felt separated from the mana (power). Years later, when she graduated from college with a degree in culinary arts and proceeded to get culinary positions with some of the top restaurants in Waikiki, she expected to feel complete. She didn’t. The last set of blueprints was done, but there was still a longing.

Working with food every day, but having no connection to it she thought back to the early days when there were no blueprints or prescribed paths. What would it take to return to that freedom? Living in a modern city, she thought the lifestyle she dreamt about was a thing of the past. It had gone extinct. Or had it? 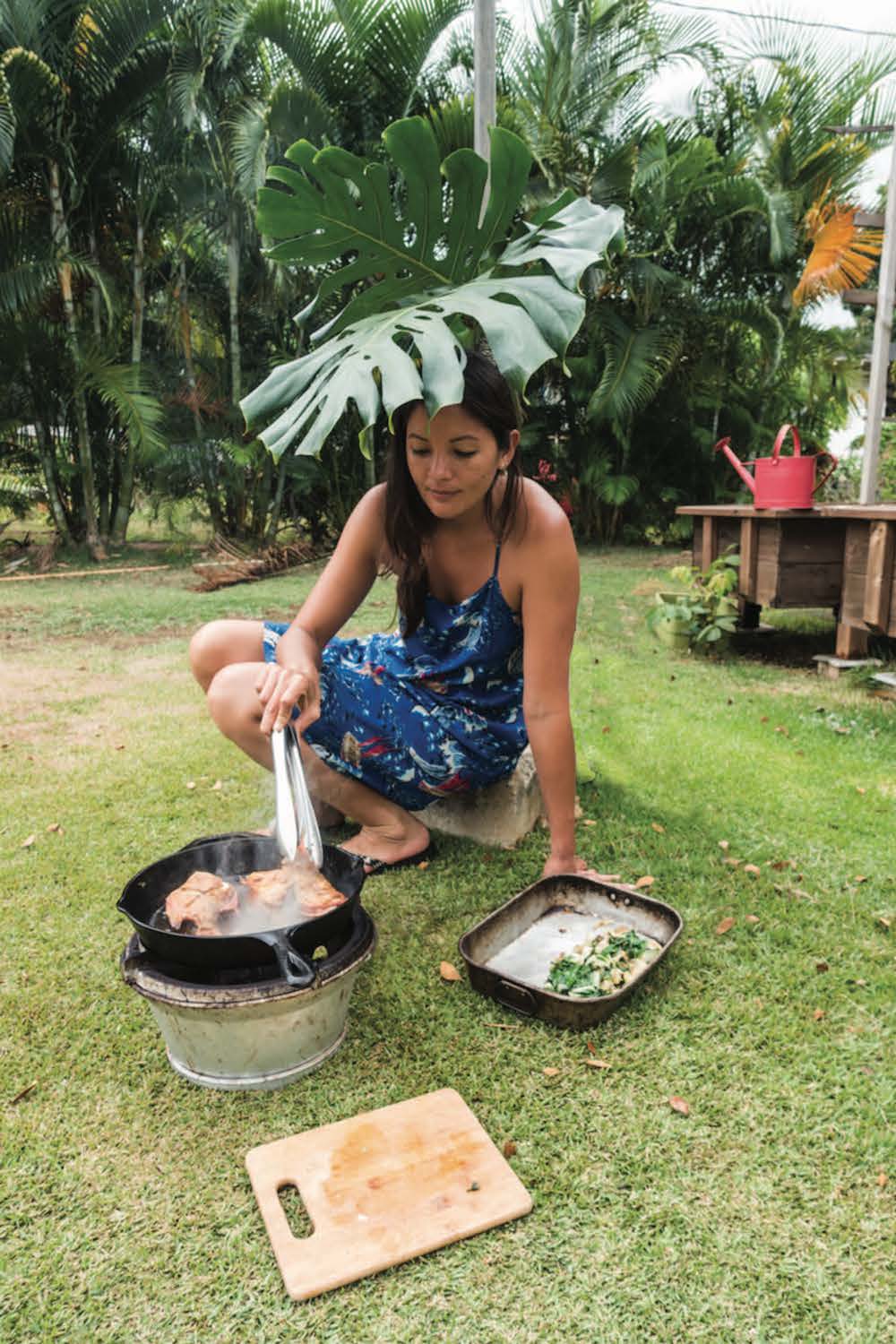 After a paddling session one afternoon, some of Kimi’s friends emerged from the ocean carrying fish they had just caught with spear guns, bound for the BBQ. An “aha!” moment followed; she came to recognize the primal possibilities of the ocean that surrounded her, and was inspired to learn to hunt and provide for herself. The boys promised to call her and teach her to hunt, but the calls never came. So this headstrong wahine (woman) went and bought a spear of her own, an inexpensive and simple three prong with rubber slingshot launch.

Kimi describes her first spearfishing experience as akin to falling in love. “I caught four little fry fish, and emerged from the ocean with a spear in one hand and dinner in the other. I felt like a woman, like the lioness who stayed up all night to feed her cubs, able to come home and nourish her family,” she gushes. “It’s like that love that you kept daydreaming about, but always doubted that it would actually happen. I found that love I was looking for, and it was something that no one could ever take away from me. I held onto it with all my might.”

And like true love, going into the ocean to hunt for her food made her so happy that everything else in her life was also elevated. She pursued it to greater depths and eventually connected with national competitors – talented and selective divers – who took her under their wing. In the true fashion of “catch only what you can eat,” their challenge was to go deeper and choose the one specific fish they wanted for that day. One breath of air, one shot, one fish. “Once the spear goes flying, it’s a very primitive style of hunting.”

And this primitive style of hunting is a bold choice, a choice to be accountable, to be honest, and to get a first hand experience of what proceeds the eating of an animal. “A respectful hunter really puts their heart into honoring their prey and being accountable for the action of killing it- it’s not just a piece of flesh.”

Kimi holds a reverence for her prey, for the life that was taken out of the sea and the hard work and hours it took to do it. Not wanting to waste a single bite of the fish in its prime freshness, after catching a big fish she would even drive halfway across the island to deliver it to other people who would appreciate it. She soon realized that catching and sharing one big fish could provide her nourishment for a week; her ocean bounty could be traded for kale, collard greens, mango, chicken eggs, avocados, coconuts, and so much more.

Kimi now forages and trades for about 75% of her food. “When I learned to spearfish, I felt self sufficient. But soon after, I realized it wasn’t just about self, it’s about community.” Fishermen, gardeners, chicken farmers, fruit tree harvesters- a community was formed. “The food that I’m now eating daily is a combination of things that I have foraged mixed with an abundance of food that has been shared from the hands of people that I know. Thanks to the fish that I caught, I get to enjoy a beautiful piece of venison that my friend on Molokai shot, and kale that my friend watered every day with love. It feels like you are a part of something bigger than yourself.”

In Kimi’s world, ideal meals are whole and well-rounded experiences into which everyone contributes. They generally contain a hearty serving of vegetables and greens, some fresh fish, and something pickled and preserved (a great way to make the most out of your harvest and save for times when the weather is not cooperating). She loves to use a lot of flavor and seasoning; her favorite is Hawaiian sea salt gathered off the lava rocks, flavored with local lemon juice from a neighborhood tree. Her cooking is infused with respect for every ingredient, using each addition as resourcefully as possible.

“I don’t like to preach, but I do like to set an example and share what I’m doing, not in a self righteous way but in an effort of service, encouraging people to find their happiness in our hectic world. I want to share the gems in my life that make me feel the happiest and my body the best. I hope that if it resonates with people, it will inspire them to do something that they care about in the same way…explore whatever it is that makes them feel connected and pono (righteous). Grow your own vegetables or know your farmer, we all have ways to contribute with our own two hands. If it’s the right thing it will make your fingers tingle.” 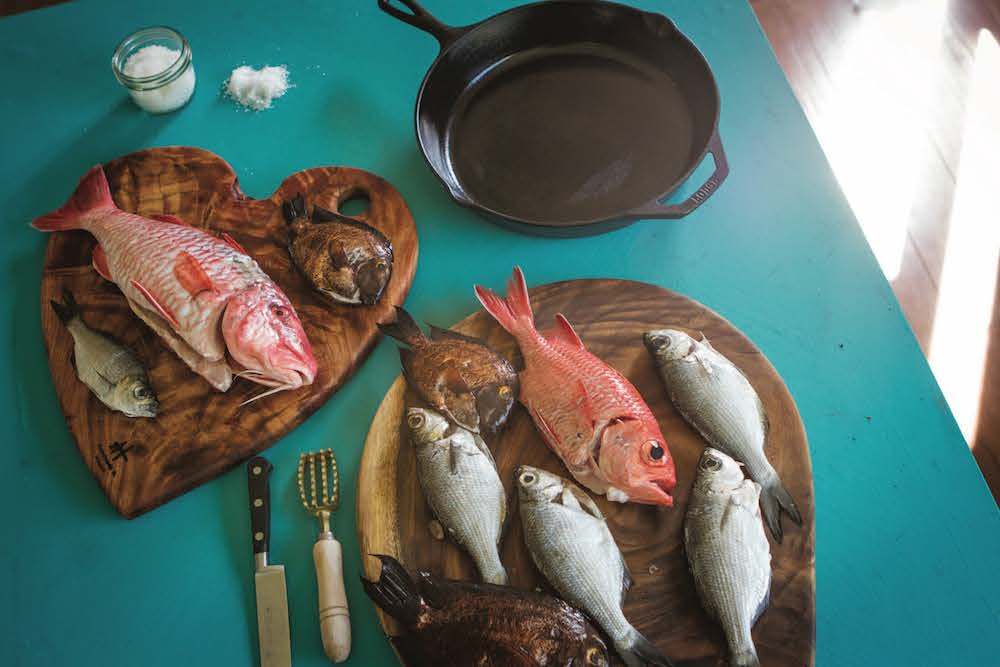 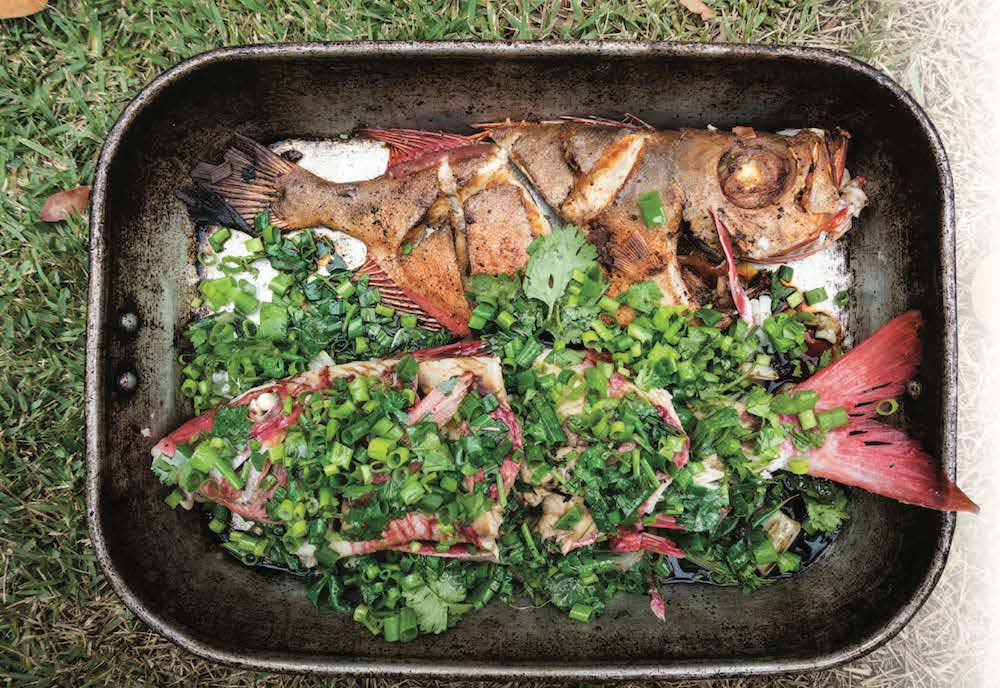 Remove gills and guts of fish. Leave skin and scales on (aweoweo or nabeta only, all other fish, please scale). Score skin and meat on both sides. Season generously with Hawaiian salt, garlic salt and coarse black pepper. I like to slightly bend the fish as I season so that salt and pepper goes into the cuts and flavors the meat. Heat a thin layer of olive oil in a pan over medium high flame. If fish is too big for pan, chop in half. Place fish in hot oil. Cook until fish skin is crispy and golden brown. I also like to smash a clove of garlic and add it to hot oil for the last couple minutes of frying. Serve hot with chili pepper water.

Scale fish, remove gills and guts. Score skin and meat on both sides of fish. Steam fish. This can be done in a steamer with water, wrapped in foil on a BBQ, baked covered, covered in the microwave, etc; as long as it’s covered while cooking, it will steam. For this particular fish, I added an inch water to a big pot then put a plate in the pot. I cut the fish in half so that it would fit on the plate and covered and cooked on high. It only took a few minutes, but cooking time will always depend on the method of steaming and the size of the fish. Chopping the fish in half always makes it cool much faster.

In a separate pan I sauté greens (bok Choi/kale/ choi sum/etc) in olive oil and garlic. Plate cooked greens as a bed for kumu. Place kumu (putting both halves back together to form whole fish) on the bed of cooked greens. Pour shoyu over the fish letting it run through the fish meat and greens. Top with chopped green onions and cilantro. Heat small amount (around 1/4 cup for 2 lb kumu) of peanut oil until smoking. Carefully (stand back and better to do outside if possible) pour smoking oil over fish, allowing it to infuse the herbs into the fish meat and add a silky texture to the sauce. When eating, spoon this soy/herbal/peanut oil over your fish meat and greens.