Created in 1974 by the Hawai`i State Legislature as a visionary experiment in generating sustainable energy, the National Energy Laboratory of Hawai`i Authority (NELHA) continues that original mission today, while also generating excitement as a leader in commercial aquaculture and mariculture enterprises. With nearly 40 years of research, experimentation and production, this state agency is now recognized as the world’s premier ocean science and technology park, growing sustainable industries by using sunshine, seawater and ingenuity.

It’s a lofty reputation evolving from what now seems a modest plan: to pull cold water from the ocean depths and warm water from the shore, using the temperature difference to turn a turbine and generate electricity.

According to officials at NELHA, its goal is “to attract tenants who can use the unique complement of natural and logistical resources to engage in successful, productive research, education and commercial activities that support sustainable industry development in Hawai`i.”

Today, NELHA is “landlord” to nearly 30 thriving enterprises that generate about $30–$40 million per year in total economic impact, including tax revenues, and provide more than 200 jobs. 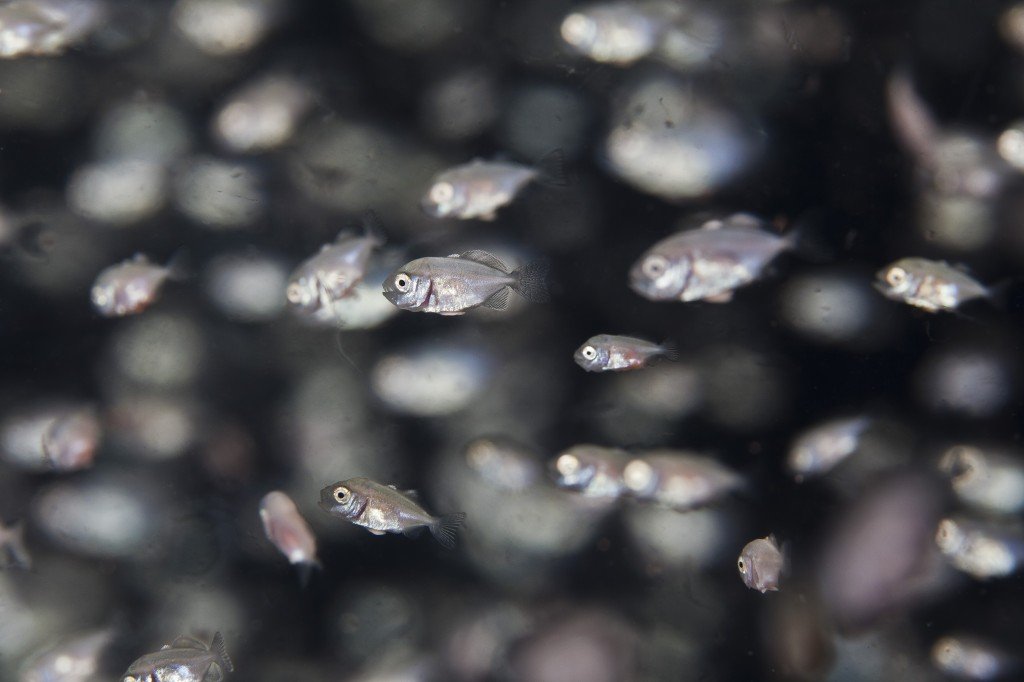 One of its most recent tenants, Blue Ocean Mariculture, is currently making waves by successfully cultivating what some have dubbed “The Wonder Fish”: Hawaiian Kampachi. Using cutting-edge mariculture—open ocean/marine aquaculture—techniques and equipment, they implement innovations in sustainable marine-farming methods, minimizing harm to the planet while helping to feed the Earth’s population!

Together with its sister company OceanSpar, Blue Ocean is defining the most advanced technology for successful, sustainable open ocean mariculture in the United States, according to Sylvia Dow, aka Queen Kampachi, head of sales and marketing for the company. She says, “We’re proud to be the exclusive producer of Hawaiian Kampachi, managing all aspects of the fish life cycle, ensuring the highest-quality fish and the least environmental impact.”

“We began harvesting our first premium, sashimi-grade Hawaiian Kampachi just about a year ago [June 2012] and the response has been tremendous. This year we anticipate 3,000 tons of our fish will be shipped to top chefs and fine restaurants throughout the Hawaiian Islands and the mainland U.S.,” Dow says.

She credits NELHA’s unique location for creating the perfect environment for the cultivation of stellar-quality kampachi.

“Our offshore facility is sheltered from the Pacific Ocean trade winds by several volcanoes, including Mauna Kea and Hualalai. The consistent water temperature, mild weather and strong ocean currents make it perfect location for open-ocean mariculture and NELHA provides us access to high-quality surface and deep ocean seawater for our hatchery facility.”

While sustainability is a major issue, there is another need for farming this species using mariculture techniques. According to experts, wild kampachi is prone to internal parasites and ciguatera toxicity, while high-quality diets and innovative culture methods used in kampachi cultivation result in one of the tastiest, most versatile, and healthiest fish available.

Kampachi’s high fat content (around 30%) not only makes for delicious sushi, but also makes the fish an excellent source of heart-healthy omega-3 fatty acids. The fact that are raised in some of the cleanest water on Earth, Hawai`i-grown kampachi are free of detectable levels of mercury and PCBs, and are completely free of internal parasites.

Blue Ocean’s Hawaiian Kampachi is produced from locally caught wild Seriola rivoliana brood fish known as kahala and are maintained on a natural diet (similar to that found in their ocean home) at the company’s on-shore facility at NELHA. Fertilized eggs, available year-round, are incubated overnight, stocked into tanks at the larval rearing facility and hatch out over a 24-hour period. They remain in the rearing facility for about two months before transfer into the land-based outdoor nursery tanks. The tanks operate with local seawater, preparing fingerlings for open ocean temperature and salinity conditions, according to Dow, during which time (another 75–90 days) they are vaccinated against bacterial infections before being transferred to the sophisticated open water offshore farm site, where they spend 10–12 months to reach harvest maturity (four to six pounds).

Once on shore, the fish are immediately chilled in high- quality brine ice to ensure freshness and are then transferred to Kona Cold Lobster, where they are processed and packed just hours after harvesting, Dow says.

Joe Wilson, co-owner of Kona Cold Lobster with his brother Dale, says the extraordinary quality and quantity of Hawaiian Kampachi cultivated by Blue Ocean continues to climb with demand from consumers and chefs across the country as awareness of its unique flavor and texture profile, as well as its health benefits, spread worldwide. The sashimi-grade fish is not genetically engineered; it’s simply well bred and is higher in omega-3 oils than just about any other fish, according to Dow.

In addition to processing and packaging Blue Ocean Hawaiian Kampachi, Kona Cold Lobster specializes in distributing live Maine Lobsters and Dungeness Crabs along with oysters, clams and mussels to consumers and restaurants throughout the island. It’s been operating in its current location for 28 years and is the only retail outlet for all the products it handles in the islands. It’s been joined by numerous aquaculture enterprises at NELHA, including Big Island Abalone and Royal Hawaiian Seafarm, King Ocean Farm, Kona Coast Shellfish, Troutlodge Marine Farms and the world’s first commercial seahorse farm, Ocean Rider, among others. 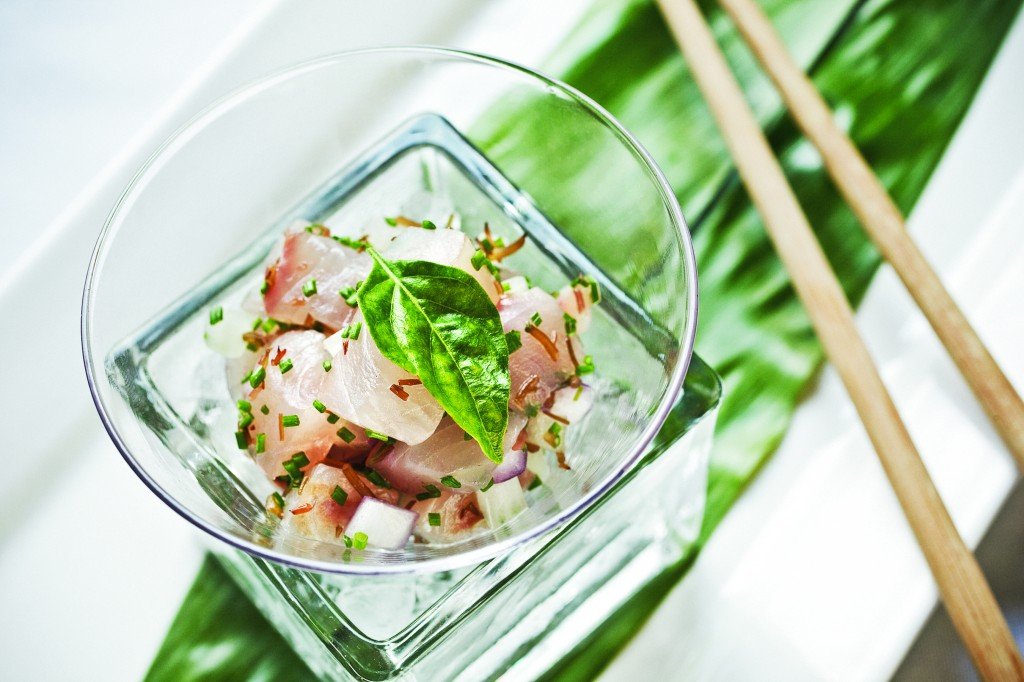 In the meantime, corporate chef Ken Schloss of Huggo’s and On the Rocks in Kailua-Kona an d Lava Lava Beach Club in Waikoloa Beach Resort – all three restaurants on Hawaii Island—says Hawaiian Kampachi is absolutely his favorite fish, personally and professionally.

“Hawaiian Kampachi is a uniquely flavored fish with a slightly nutty and a distinctly fresh, clean taste. While it’s wonderfully silky in texture, it’s also firm enough to prepare on the grill—one of my favorite cooked preparations,” Schloss says.

It’s an incredibly versatile fish, he continues, perhaps best served raw—simple sashimi or poke—but delicious sautéed, pan-seared, steamed or poached as well. One of his signature dishes at Huggo’s is the Kampachi Poke Tower.

Another favorite preparation, frequently offered as an evening special at Huggo’s, Schloss says is the Whole Roasted Kampachi. “Ahi may always remain the go-to favorite of visitors to Hawai`i, but kampachi is growing quickly in awareness and popularity by both locals and visitors alike,” Schloss says.   For more information visit www.NELHA.org or www.BOFish.com. 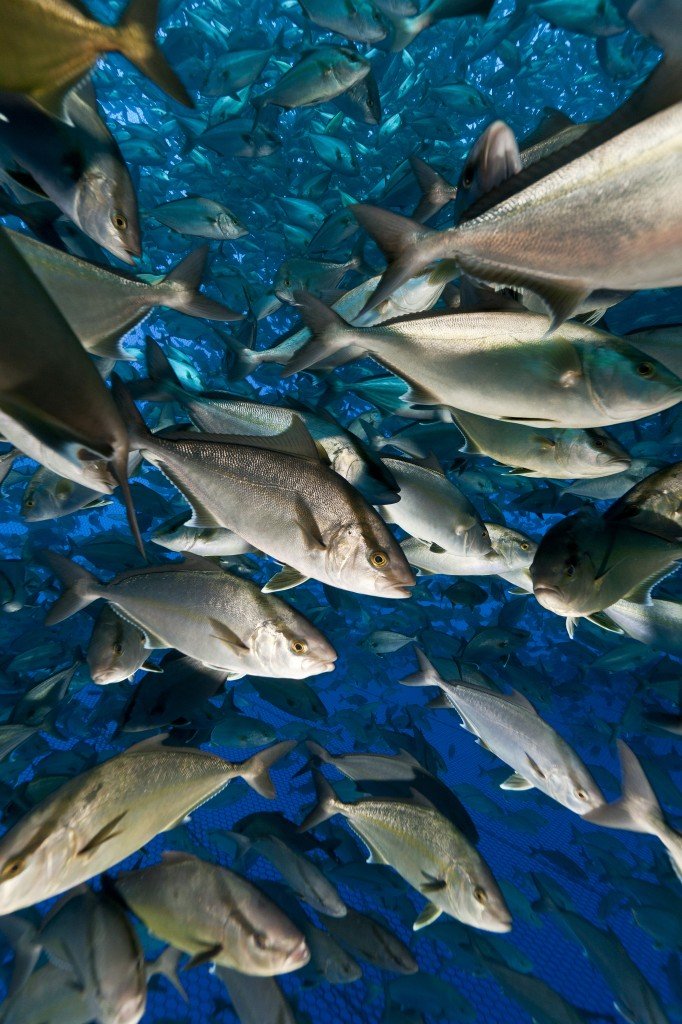