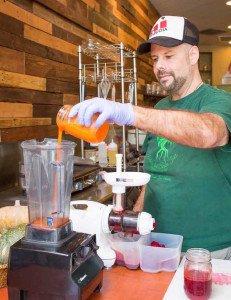 Chef Stephen Rouelle talks the talk and walks the walk in the kitchen. The chef demonstrates his personal values and nutritional knowledge—learned through personal experience—via menu selections and best practices at two Hawai‘i Island eateries. They are Under the Bodhi Tree at The Shops at Mauna Lani on the Kohala Coast and Making the Cut Café inside Pacific Island Fitness in Kailua-Kona.

“I spent 20 years working at various hotels and feel like I had success,” shares Stephen. “However, I wasn’t personally eating healthy and I was living my life in silos.”

Elaborating on what that means, chef explains his personal values and relationships with food were contained separately—“they didn’t meet.” He says choice of menu items and diet didn’t always “line up” to his beliefs about the environment and the humane treatment of animals.

”I feel my life and work are now one and I have more synergy.”

The need to lose weight prompted Stephen to change his eating habits. He started on a vegetable-based diet of lean protein and eventually converted to a “primarily raw vegan diet” after finding nutrient-rich, raw food is generally low in calories and contains beneficial living enzymes.

Chef says he’s now living his beliefs regarding food. Under The Bodhi Tree offers vegetarian, vegan (zero animal products) and raw food. Choice of ingredients is also driven by local availability and the restaurant is the state’s only eatery awarded a Hawai‘ i Dept. of Agriculture Seal of Quality, designating it uses genuine, Hawai‘i-grown or -made premium products.

The challenge in marketing Bodhi’s specialized food is making it approachable to all prospective patrons, according to Rouelle, so menu items use names people relate to. For example, Reuben’s Garden Sandwich is “corned” tofu—prepared using a salt brine and pickling spice—melted swiss cheese, house-made sauerkraut, mushrooms and kale served on seeded rye. The Garden in a Grinder Gazpacho aptly describes the makings of this tasty cold soup. It has a healthy “slow glycemic load”—meaning the digestion of fiber slows down the body’s absorption of sugar.

At the newly opened Making the Cut, chef prepares “fitness food,” offering items lower in carbs and fat and higher in protein. “We cater to gym-goers and those on a paleo diet,” says Stephen.

Summing up his journey on fusing food and career with personal values, chef concludes, “I feel my life and work are now one and I have more synergy.”