You wouldn’t expect lettuce growing on a tennis court.

But that’s exactly what you’d find at the Grand Hyatt Kaua‘i Resort & Spa in Po‘ipu–.

The hotel converted one of its 4,000-square-foot tennis courts into a greenhouse, growing several varieties of lettuce such as green and red oak leaf and Lollo Rossa that will be used by the restaurants on-site. It expects to produce 100 pounds of greens a week, with plans to grow different crops, including tomatoes and herbs, by the end of the year.

And while many hotels boast flourishing gardens, even edible ones, this one is different: everything here is grown hydroponically, without soil and using nutrients added to the water to grow the plants. This method, when done right, is more efficient in terms of water and land use while minimizing the need for pesticides. 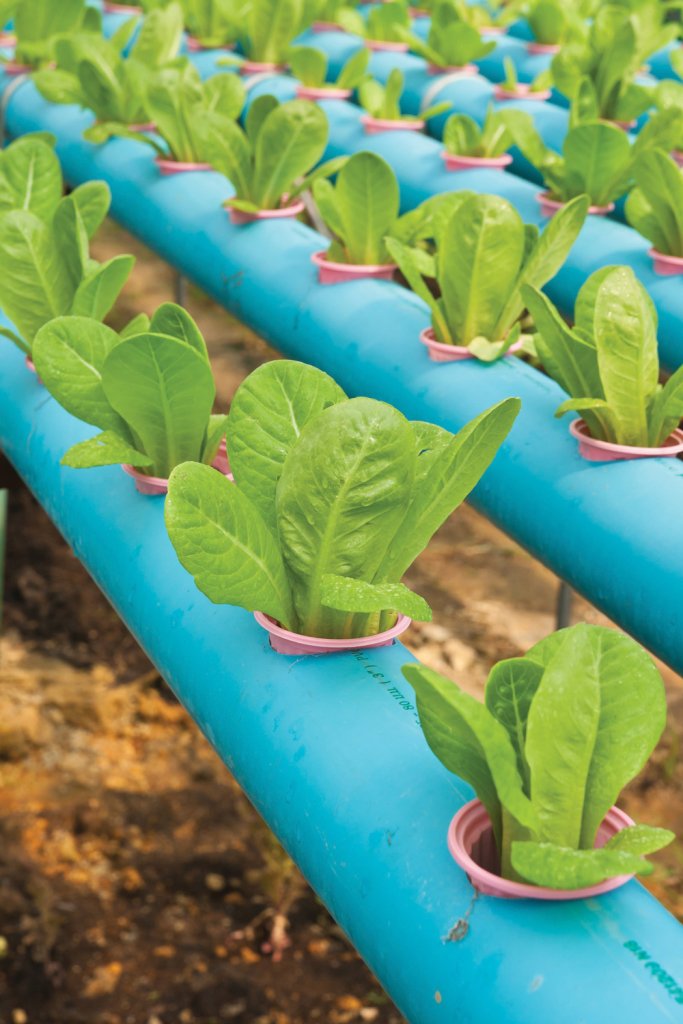 The restaurants here benefit, too, with fresh produce grown steps away from their kitchens.

“Sustainability is important on many levels and for many different reasons,” says Matt Smith, executive chef at the Grand Hyatt Kaua‘i Resort & Spa. “Most often overlooked is the idea of being sustainable from a financial standpoint. For obvious reasons, growing our own lettuces supports a healthier (profit and loss) statement … And when looking at the hydroponic farm from an environmental perspective, it’s easy to see how much it can help us lower our impact on the environment. I often like to refer to the way our grandparents ate and produced food. They only ate what was in season and typically within a 100-mile radius. This had a tremendous amount of benefit on the local economy, the environment and the health of the people in the community.”

Hydroponics and aquaponics — a combination of aquaculture and hydroponics, where fish effluent water is used to grow the vegetables — are both soil-less systems. Despite the actual technology being thousands of years old, these systems are quickly gaining in popularity with both backyard and commercial farmers. Growers can grow more plants in these systems, getting higher yields per square foot. This is an attractive benefit for  farmers without much land or growing in areas with poor soil quality. Placing these systems in controlled environments, you can grow crops all year long.

“The cleanliness, ease of operation, consistency of product and current demand from consumers for high-quality produce are reasons why these two methods are so popular,” says Jensen Uyeda, a junior extension agent for the University of Hawai‘i’s College of Tropical Agriculture and Human Resources, who helped build the hydroponic greenhouse at the Grand Hyatt Kaua‘i Resort & Spa.

“I think there is a larger push from the college and industry to educate the public about these growing systems,” Uyeda adds. “The education provides potential growers the ability to make informed decisions as to what type of systems to construct and how to operate them.”

It especially makes sense in Hawai‘i, experts say. The islands are geographically isolated and dependent on imports. (The state imports about 85 percent of its food.) Natural resources are limited. Cost to do business here is high.

So it’s no surprise that farms here are trying hydroponic and aquaponic systems — some exclusively — to grow their vegetables.

Waipoli Hydroponic Greens in Upcountry Maui grows about 180,000 plants year-round in hydroponic greenhouses, producing up to 15,000 pounds of specialty lettuces a week. Kawamata Farms in Waimea on the Big Island churns out more than 20,000 high-quality, hydroponically grown tomatoes every week.

Today, the farm produces about 5,000 pounds of lettuce a week, growing three different head lettuce varieties and 10 salad types. Its healthy leafy greens are being fed the nutrient-rich effluent  from thousands of tilapia growing in nearby tanks in a farming method that’s both sustainable and responsible. The plan is to add more grow beds and ramp up production in the next few years.

To Jason Brand, of Kunia Country Farms it’s important to run a financially successful farm in a sustainable way. Meaning, generate revenue without taxing the environment. He feels that aquaponics is the way to go.

The farm uses far less water than traditional soil-based farms and no fertilizers, as the fish waste provides the adequate nutrients for the plants. And soon, it will install solar panels to sustainably meet its electricity needs. 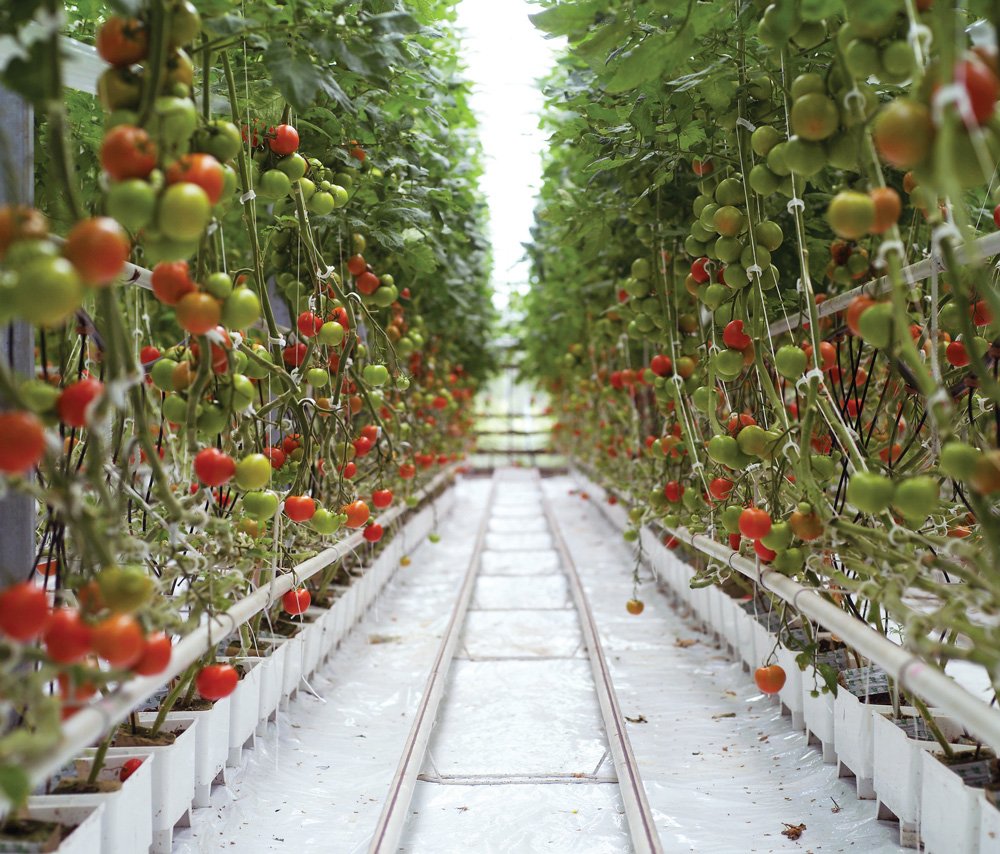 “Our goal was to reduce the cost of food and solve our food dependence,” says Brand, who started the farm with Cary Takenaka and Scott Wo. “That’s how we got into aquaponics … It’s a sustainable way to help reduce Hawai‘i’s food dependence on the Mainland and imports. And the farm helps to grow employment in rural O‘ahu.”

She liked the fact that she could recycle the water, ditch the fertilizers and pesticides, and grow her own vegetables and protein in aquaponics.

“I’m about utilizing everything more than once and not wasting,” says the 37-year-old mother of two. “Wasting is a huge thing for me. We should be giving back to the earth more than we take.”

Lee Bryant of Mays Wonder Gardens in Hale‘iwa says he uses, on average, 90 percent less water than traditional dirt farming on his 30-acre hydroponic farm, one of the largest in the state. And since his farm is located about 1,000 feet above the North Shore, he says he has very little issues with pests. In fact, he’s gone three months without spraying anything. And when he does use pesticide, he uses only lightweight, certified organic sprays.

“If I had to spray with restricted-use pesticides,” he says, “I wouldn’t continue the business. I’d go and do something else.”

But these systems are not without their own challenges.

According to Uyeda, there are water and electrical costs associated with both hydroponics and aquaponics. Nutrients aren’t cheap and fish require protein-rich feed that can be pricey, too. Commercial farmers have the typical challenges of land costs,competition with cheaper imports and production consistency.

But that shouldn’t — and likely won’t — stop farmers from exploring soil-less options.

“These systems should be used as another contributor to Hawai‘i’s food security, but we still need to maintain our large conventional and organic farming systems, which currently provide the bulk of our food supply,” Uyeda says. “In terms of lettuce production and leafy green production, (soil-less farming) may be the best system. I think that there may be more producers in the future that will utilize suboptimal lands for food production with these systems as the land costs are usually lower than prime ag lands.”

Bryant says the initial startup cost for a hydroponic farm the size of his — he harvests up to 10,000 heads of lettuce a day, five days a week on 10 acres of land — is very high compared  to a traditional soil-based farm. And since he has no power at his farm, he has to run five 15,000-watt generators around the  clock.

But alternative energy has eased that cost. He’s already installed solar and wind on the farm, which has dropped his energy consumption by 35 percent.

For Dan Ching, who runs Ili‘ili Farms on two acres of land in Lualualei Valley in Wai‘anae on O‘ahu, the benefits of growing his vegetables in aquaponic systems far outweigh the challenges.

A few years ago, Ching started his farm with his wife, Mei, to stay healthy and keep busy after retirement. Today, the farm produces Mānoa lettuce, Shaghai bok choy, watercress, green onions and cilantro sold at Whole Foods, Foodland and Down To Earth. Solar panels keep his electrical costs to a minimum. And since he’s using fish effluent to grow his plants, he’s able to get his produce USDA organic-certified. (Hydroponic produce can’t get that designation because you have to add chemical nutrients to the water.)

And though he touts the benefits of aquaponics, Ching doesn’t see this method as entirely replacing soil-based farming.

“I think aquaponics is best kept small, on an acre or more, and spread throughout communities,” he says. “Backyard and community aquaponics are good. Commercial aquaponic (operations) need a lot of capital to startup. It’s not for everyone.”

Fred Lau, owner of the 18-acre Mari’s Gardens in Mililani on O‘ahu, one of the largest hydroponic and aquaponic farms in the state, took on the challenge of running a large-scale commercial operation. He sees these soil-less methods as the future of farming in Hawai‘i and around the world. 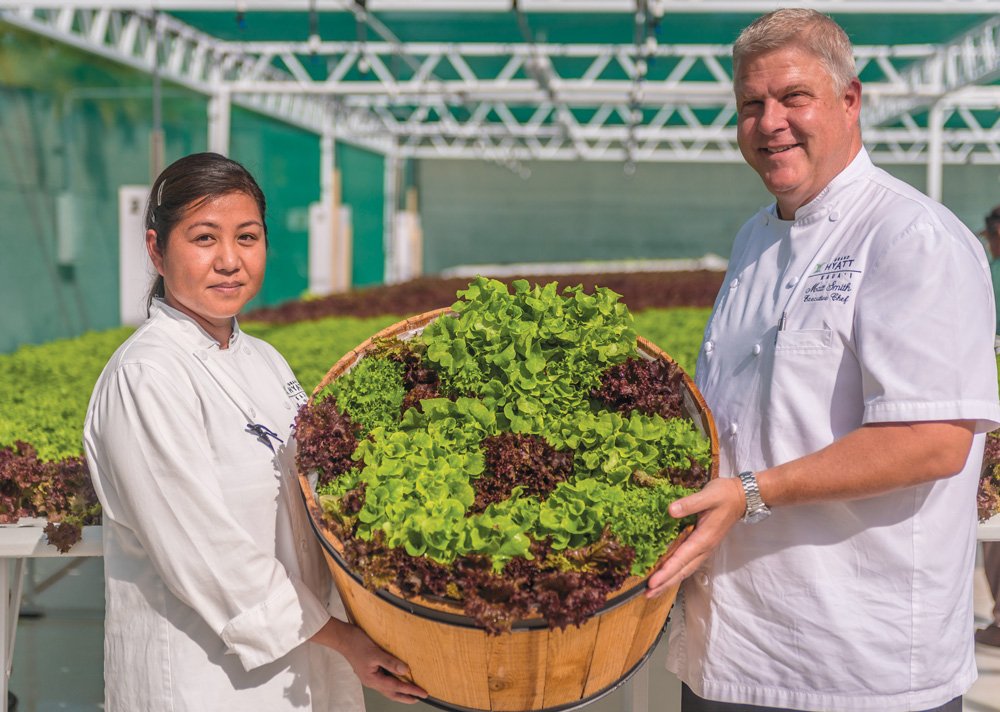 “Traditional farming can’t stay the same,” he says. “We’re way more intensive than what (traditional farmers) can do because of these systems. There’s no weeds, no need for tilling, no need for fertilizer, and there’s no downtime in growing. We actually get substantially more cycles than a dirt farmer.”

Across a few acres in Mililani, Lau grows dozens of rows of Mānoa lettuce, flourishing in grow beds of black cinder. Nearby are tanks and troughs of thousands of tilapia and Chinese catfish.

He also grows other varieties of lettuce, heirloom carrots, kale, beets, radishes, green onions, watercress, ong choy, arugula and Okinawan spinach. And in greenhouses are cherry tomatoes and Japanese cucumbers. His produce is sold at Whole Foods, Down To Earth, Kokua Market, various farmer’s markets and in CSA boxes. They can also be found on the menus of Poke Stop, Honolulu Burger Co., and at the restaurants at the Halekulani Hotel.

What Lau is doing at Mari’s Gardens has inspired other farmers — including Ching — to consider soil-less methods of growing food.

David Morgan, director of agricultural operations at Kualoa Ranch in windward O‘ahu, visited the Mililani farm recently and is toying with ideas to set up an aquaponics system at the ranch. Right now, Kualoa has an aquaculture program, growing tilapia, oysters and shrimp. Growing vegetables using the effluent water makes sense to him.

“I think now people are starting to figure out how to control things a little better so you can optimize growth on both ends of that production cycle,” he says. “My interest in aquaponics has definitely been rising lately.”

Aquaponics is a food production system that combines aquaculture and hydroponics in a symbiotic environment. The waste from the aquatic animals — fish, crayfish, prawns — are used to provide nutrients to the plants. The byproducts are broken down by nitrogen- fixing bacteria into nitrates and nitrites, which are utilized by the plants as nutrients. The water is then re-circulated back to the aquaculture system.