There’s something intriguing brewing in the hip, urban neighborhood of Kaka‘ako near Waikiki, where a growing number of craft-beer breweries have emerged over the last several years including Honolulu Beerworks, Aloha Beer Company, and Home of the Brave Brewing Company. By this fall, Waikiki Brewing Company will have opened a new loca-tion on Queen Street, further bolstering the neighborhood’s newfound status as the “brew district” of the state.

Hawai‘i is now home to more than a dozen breweries across the island chain, with some new arrivals slated to open by the end of this year. Whether Kaua‘i Island Brewing Co. in Port Allen; Big Island Brewhaus in Kamuela; or the venerable Maui Brewing Co. in Lahaina and Kihei, craft breweries attract visitors and residents alike who appreciate creative, quality brews fresh off the tap—and who want to raise their glass to the craft-beer culture with fellow hops aficionados.

Brewmasters experiment with a range of recipes, creating lagers, ales, stouts and IPAs suitable for both the beach and fine-dining restaurants. Signature libations—like Honolulu Beerworks’ Cocoweizen brewed with hand-toasted coconut—reflect the tropical “terroir” featuring local ingredients such as pineapple, citrus and cacao. Increasingly, more local breweries are canning their flagship beers for distribution in-state and on the mainland. Maui Brewing Co.’s Bikini Blonde Lager is one example. Mehana’s Mauna Kea Pale Ale from Hilo is another.

“When we first opened in 2015 near Ala Moana, we were only the third operating brewery on O‘ahu, after Gordon Biersch, which was the first,” he said. “This will be our second brewery in town, which will allow us to increase production and also have the freedom to experiment with new and fun styles.”

Waikiki Brewing Company offers nine handcrafted beers, one of which is the Hana Hou Hefe fashioned in the style of an American pale wheat beer. The upcoming opening of the brewery’s second location will make it possible to expand distribution to the outer islands. Joe says that the craft-brew community in Hawai‘i is filled with camaraderie and possibilities.

“The scene on the mainland had already taken off years prior, and it took a little while for the craft beer movement to fully migrate to Hawai‘i,” said Joe. “It’s a friendly camaraderie here among the brewers. A rising tide lifts all boats.”

A brief and recent history of craft beer in Hawai‘i begins with the opening of Kona Brewing Co. in Kailua-Kona in 1995. (The very first brewery in Hawai‘i, however, was Honolulu Brewing & Malting Co., founded in 1898 and maker of the legendary Primo.) Although most all of Kona Brewing Co.’s product is now brewed on the mainland, the company set the bar high in achieving widespread name recognition.

Founded in 2005 in Lahaina, Maui Brewing Co. brews all its beer in Hawai‘i, officially making it the largest craft brewery in the state. The company employs more than 400 people statewide, says Marsha Hansen, marketing manager for Maui Brewing Co.

“Our cans are manufactured on O‘ahu, and we brew and package everything here on-island. Right now, we are at the 50,000-barrel mark, and our tasting room offers 28 to 30 of our beers at any given time. We are in 23 states and 10 countries including Japan, South Korea, Chile and Canada.”

Owner of Maui Brewing Co., Garrett Marrero came to the Islands from San Diego, the country’s undisputed craft beer utopia. In 2005, he bought a restaurant/brewery called Fish and Game Rotisserie, located near Lahaina, where he began to brew local craft beer. Distribution took off in 2008.

Veteran brewmaster Tom Kerns, originally from Portland, Oregon, was instrumental to founding Maui Brewing Co., having helped establish the original brewery in 1997 at the former Fish and Game Rotisserie. Fast forward to today. At his brewery in upcountry Kamuela on the Big Island, Tom continues to dedicate himself to the fine art of handcrafted beer at Big Island Brewhaus, opened in 2011. His focus is on barrel aging beers.

“Our Golden Sabbath is aged in American Oak Chardonnay barrels, which really does enhance the beer,” he said. “It’s a strong Belgian golden ale brewed with Hawaiian honey, and is one of our bestselling beers. Our Overboard IPA is our most popular beer. It won the World Beer Cup and the Great American Beer Festival. We just did a collaboration beer with Jolly Pumpkin Brewery in Michigan. They are friends who come here to visit. We used jaboticaba in the recipes.”

At Big Island Brewhaus, there are 18 to 20 choices on tap most days. His beer is available all across the state, and new recipes are always on the horizon.

“My philosophy as a brewer is that I like to take traditional things and imagine new flavors,” said Tom. “Here in Hawai‘i, there are interesting options when using local ingredients. We’ll use honey, coffee, cacao and a wide variety of fruits and spices in different recipes.”

“There are a lot of factors that challenge small brewers here,” said Dave Curry, co-owner and brewer of Kaua‘i Island Brewing Co., and a guild member. “To manufacture draft beer, we pay .54 cents a gallon in state excise taxes. For cans and bottles, it’s .93 cents a gallon. Compare that to California, which is .20 cents a gallon. The guild is also trying to help our members obtain better rates on shipping in grains. The barley and hops, for example, have to be shipped to us on a barge. Infrastructure costs can be prohibitive as well.”

Veteran brewers like Dave and Tom support up-and-coming brewers. The community is close-knit. Some brewers join ranks and order their shipments together.

At Honolulu Beerworks, bar manager Nick Riley says their hops originate from the Pacific Northwest, New Zealand and Australia, allowing brewmaster Geoff Seideman to take advantage of alternate growing seasons throughout the year. Additionally, some brewers on Maui and Hawai‘i Island are now attempting to grow hops, he said.

“We have 14 styles of beer on tap here at Honolulu Beerworks, and we like to use local ingredients,” said Nick. “We use citrus when it’s in season from a North Shore farm. I like our Sheltered Bay IPA, which is a very hop-forward, bitter beer style originated from England. It has a deep, amber color and balances out the malt sweetness with the bitterness of hops. It’s an easy-drinking beer.”

While good beer and good food go hand in hand, there’s also opportunity to incorporate beer as a culinary ingredient. Honolulu Beerworks blends one of its IPAs into a delicious, house-made Caesar salad dressing. The Beer-Made Mac & Cheese is baked with Point Panic Pale Ale cheese sauce, while the Bavarian Soft Pretzels are served with South Shore Stout mustard.

Opened in 2012, Kaua‘i Island Brewery is one of two breweries on the island, the other being Kaua‘i Beer Company in Lihue. Kaua‘i Island Brewery features 13 beers on tap, with a focus on lagers. Three different types of yeast are used to create a variety of styles. One of its most popular beers, the Captain Cook IPA is close to 6.3 percent alcohol, says veteran brewmaster Dave Curry.

“I’ve been fine-tuning the recipe for 18 years and it’s just how I like it. I have two other IPAs that I experiment with using different varieties of new, exciting ingredients that weren’t available ten years ago. We are about to double the size of our manufacturing facility to a 10-barrel brewhouse. In the scheme of things, it’s not that big, but it’s growth for us and that’s great!”

Brewers across the Islands want to see each other succeed. A stalwart of the industry, Maui Brewing Co. provides much inspiration. The Maui-based company recently opened a restaurant this year at Holiday Inn Resort Waikiki Beachcomber. Additionally, the company’s Kihei brewing site will unveil a restaurant by January 2018.

“We are currently working hard to get fully off the grid,” said Marsha Hansen of Maui Brewing Co. “Our facility on Maui is covered with photovoltaic panels, and soon we will be fully off grid. We also work with local farmers by giving them our spent grain to use for animal feed.”

For growing brewhouses like Honolulu Beerworks, the fact that Hawai‘i could become comparable to meccas like Seattle, Portland, San Diego and Denver bodes well for the future of the state’s craft-beer industry.

“There is an interest and taste for craft beer among locals and tourists,” said Nick, who assists in the creation of brews at Honolulu Beerworks. “We have a great mix of visitors, residents and Japanese tourists, and a solid pau hana rush with the local crowd in the evenings. The distributors have seen that there is a big market for craft beer. It’s been a long time coming for beer enthusiasts. I wouldn’t be surprised to see the trend continue.” 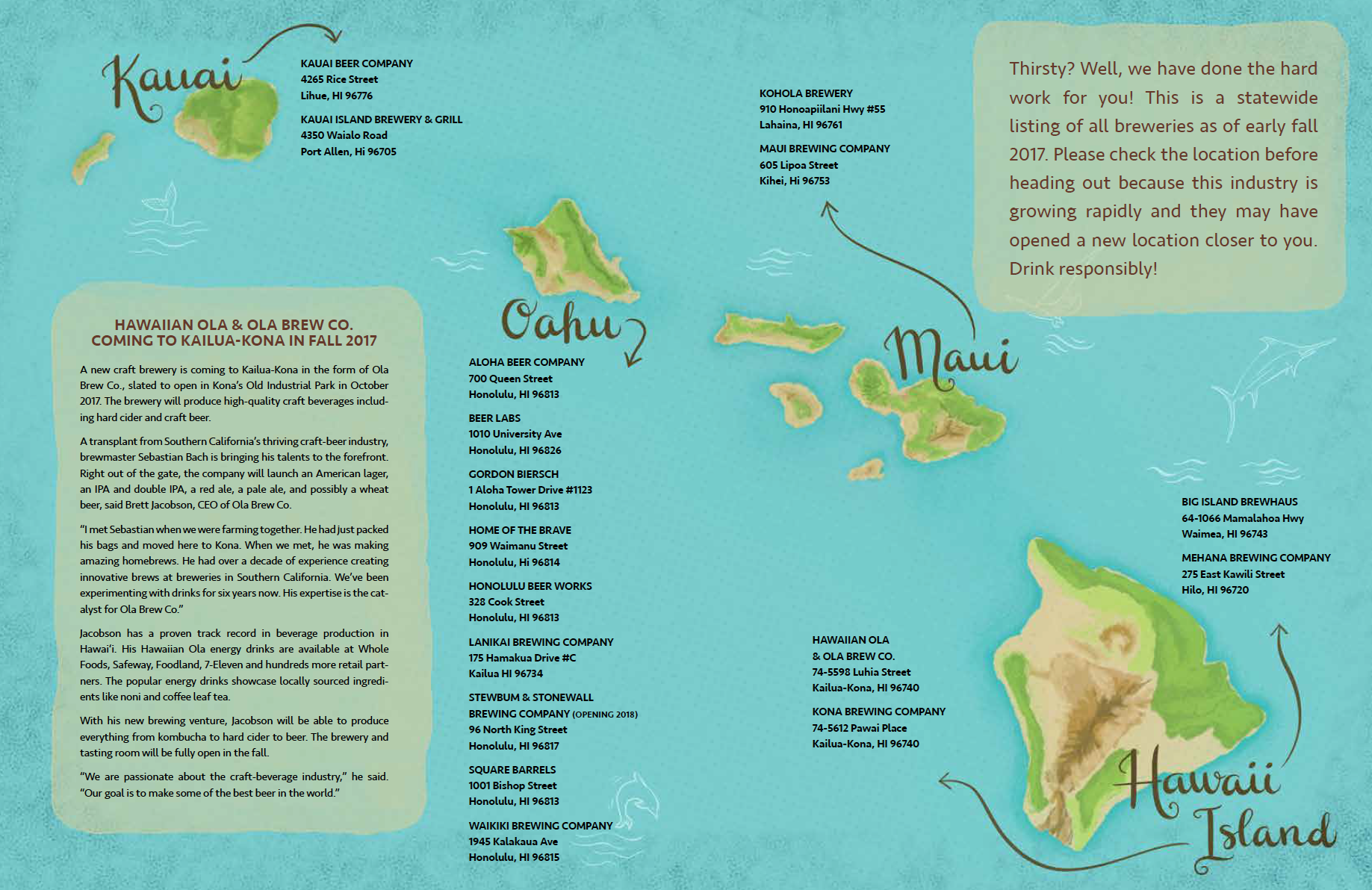