How a Maui group set out to grow future farmers one salad at a time, and wound up inspiring a “localicious” movement across the State.

It all started with a salad. And the potential impact of a humble dollar. Literally.

In the fall of 2011, members of Maui County Farm Bureau’s “Grown on Maui” committee were pondering the fact that a typical principal farm operator in Hawai‘i is around 60 years old. “We realized we needed to do something to foster up-and-coming farmers,” says committee member Charlene Ka‘uhane. “Maui County’s Office of Economic Development is a strong supporter of our programs, but we’d maxed out on our existing funding, and realized we needed to explore other avenues.” 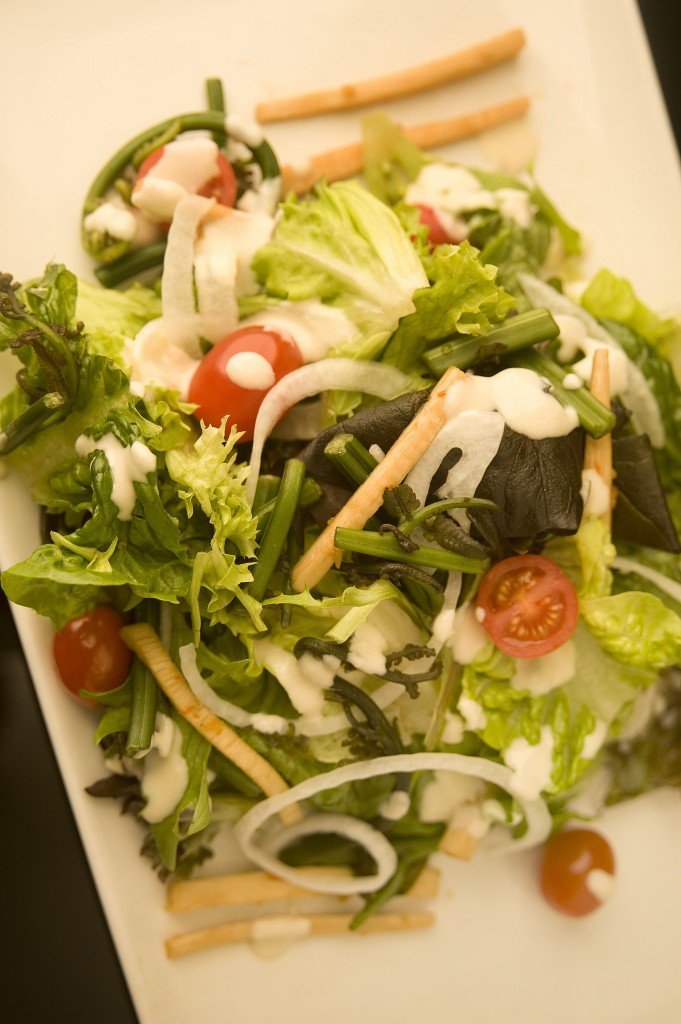 From this conversation, the Farm Bureau’s “Localicious, Dine Out Maui” promotion was born. Participating restaurants create a salad made with locally grown ingredients and designate these items with the Grown on Maui logo. For every salad sold, a dollar is donated to the Bureau’s Growing Future Farmers fund, administered by the Hawai‘i Agricultural Foundation. Since its inception, the campaign has raised an impressive $13,000. “That’s a lot of salads,” Charlene chuckles.

Proceeds from Localicious, Dine Out Maui are distributed in the form of grants and scholarships for new farmers and ranchers to start or enhance agricultural businesses in Maui County. “Scholarship recipients are graduates of the University of Hawai‘i Maui College’s agricultural program who wish to complete four-year studies at UH Hilo or Oregon State University,” Charlene reports.

Existing farmers may apply for grants to expand their businesses. “Smaller farmers need just a little help, not a huge amount of money,” says committee member Chef Chris Schobel, formerly of Hula Grill. “Who knows, a scholarship or grant recipient could be the person who comes up with something really significant, all because we’re selling salads.”

But growing future farmers isn’t just about raising money. The Grown on Maui Committee has hosted several meetings with chefs and farmers so each can understand the other’s needs. “When we first began our meetings, we really didn’t know each other,” says committee member Eric Faivre, executive chef at the Grand Wailea. “They didn’t know what we needed, and we didn’t know what they grew. So we made lists of ten items we always use, like Romaine lettuce, and ten specialty items we’d like to have, like baby carrots and artichokes.” 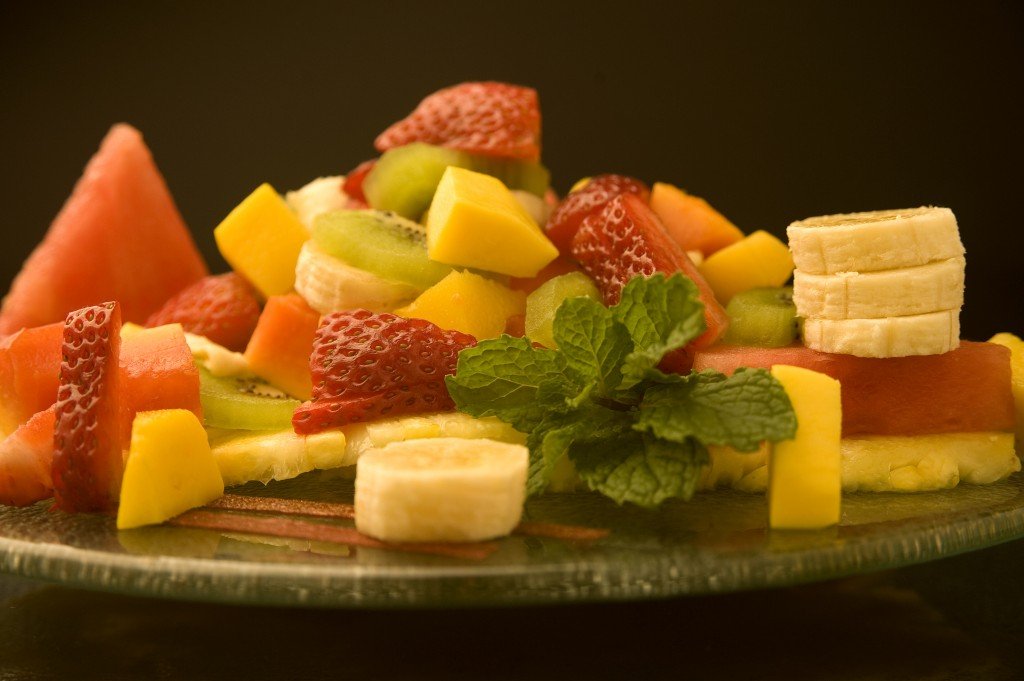 “Sourcing ingredients is harder than it looks,” says Tylun Pang, committee member and executive chef at the Fairmont Kea Lani’s Ko Restaurant. “This program has opened up some amazing doors. It’s given me a greater respect for what our farmers deal with every day. We now have a relationship, and it’s no longer about buying veggies in a box.”

Committee chairman Darren Strand, president of Maui Gold Pineapple Company, also applauds the collaboration. “The farmers said, ‘I wish I could sell more,’ and the chefs said, ‘I wish I could buy more.’ This program helps farmers sell more products, identifies restaurants willing to support ag, and creates a funding source to educate the next generation of farmers.”

Chef Schobel adds another campaign benefit, the opportunity for restaurant servers and guests to interact about the importance of the island’s ag industry: “Guests feel positive about eating something delicious that’s grown on Maui and making a donation for a worthy cause.”

Committee member Scott McGill, executive chef of TS Restaurants group, which owns Hula Grill and Duke’s Beach House, specifically trains his staff members on the program. “We take them on farm visits, and we’ve had Dave Horsman from Ho‘opono Farms come into our restaurants to meet everyone,” he says. “I’m excited about the program, which makes our staff excited, which makes our guests excited.” 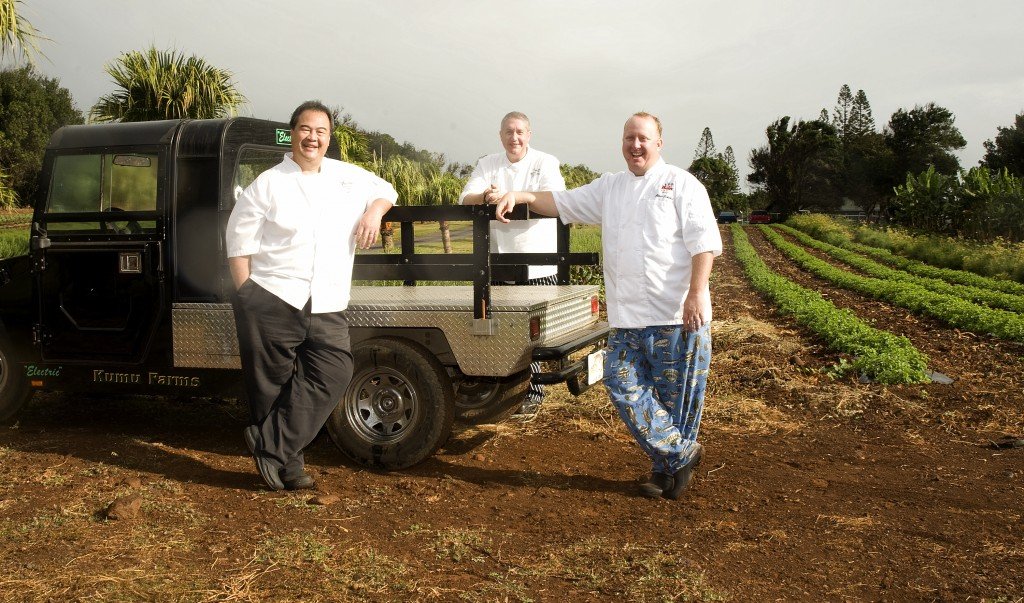 During the month of March, the Localicious campaign expands to encompass all Hawaiian Islands, not just Maui. “When we discovered how successful the Maui County Farm Bureau’s Localicious program has been, we saw an opportunity to create a statewide initiative,” says Denise Hayashi Yamaguchi, executive director of the Hawai‘i Ag Foundation.

Restaurants participating in Localicious Hawai‘i have designated an item on their menu (not necessarily a salad) that’s made with locally grown, caught or raised products, and a portion of the proceeds goes towards statewide ag education. Localicious Hawai‘i is chaired by renowned chef Alan Wong, who has restaurants on both O‘ahu and Maui.

“Restaurants raising at least $500 during the month of March can adopt a local school where the Foundation’s Ag in the Classroom program will be implemented,” says Denise. “The Foundation will partner with public school teachers to introduce an innovative national agricultural program in the classroom beginning in fall 2014. Our goal for this year’s Localicious Hawai‘i campaign is 60 participating restaurants generating $50,000 in donations, and we plan to make it an annual event.”

And it all began with a simple salad 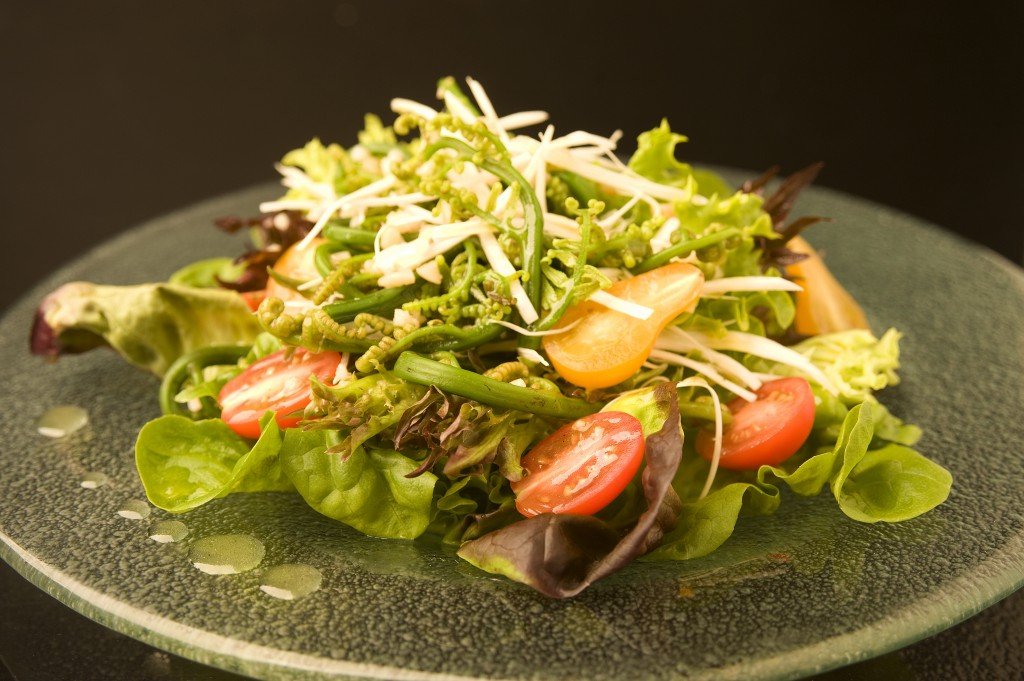 “Growing future farmers is critical to the perpetuation of Hawai‘i’s agricultural industry,” says Charlene Ka‘uhane, “and ag education is fundamental to ensuring its continued viability. We want our keiki to know where their food comes from, understand ag’s importance in our communities, and see farming as a genuine career opportunity.”

“Localicious is a perfect example of how giving now pays off in the future,” says Chef Schobel.

To find out which Hawai‘i restaurants are participating in the Localicious Hawai‘i campaign during the month of March, visit www.localicioushawaii.com.