If there was an easy-to-grow crop that was drought-tolerant, could be harvested three times a year, and had countless uses from clothing, cosmetics and construction to fiber, food and fuel, would you grow it? And if you knew it could turn abandoned fields green, provide good jobs, and reduce Hawai‘i’s dependence on imported goods, would you support it?

Such a plant exists. It’s the lanky, lean member of the hops family Cannabis sativa. Called industrial hemp to distinguish it from marijuana, hemp is related to, but very different from pot. You could puff hemp all day long but you wouldn’t get even a little high. Industrial hemp’s THC content is less than 0.3 percent compared to marijuana’s 20 percent or higher.

Advocates have wanted to grow hemp in Hawai‘i for decades but have had to wage an endless battle against misinformation and fear. Now it appears they’ve reached a point where those voices can no longer be dismissed or delayed.

One of the most authoritative proponents of hemp in Hawai‘i is the only man in the state authorized to grow it: Dr. Harry Ako. Retired chair of the Department of Molecular Biosciences and Bioengineering at the University of Hawai‘i (UH), Ako is currently conducting a two-year research project for Hawai‘i’s Department of Agriculture.

Under a provision of the 2014 Federal Farm Bill and Hawai‘i’s own Act 56, hemp can be grown for research by a university or state ag department. Ako oversees the study at the UH College of Tropical Agriculture and Human Resources (CTHAR) research station in Waimanalo where a quarter acre test plot is divided into onesquare yard sections to see how subtropical hemp performs in Hawai‘ i.

In his findings, Ako says hemp exceeded his most optimistic expectations with “unbelievable potential” for Hawai‘i. Unlike marijuana plants which are spaced far apart to produce large buds, industrial hemp is grown in tight formation which discourages weeds. Ako’s plants also required no fertilizer or insecticide and only half an inch of water per week.

Struck by the plant’s rapid growth and productivity Ako said, “I couldn’t believe it when we crunched the numbers. You can do three crops per year with one acre yielding about 30 tons of fiber for construction, 30 tons of leaf for animal forage and 5 tons of seeds [for food].” According to Ako one acre of seed hemp could produce 40,000 candy bars -translating to $20,000 for farmers.

He also found growing hemp to be effective for phytoremediation — decontaminating soil with plants. He says water used to grow hemp encouraged bacterial growth which neutralized contaminants in the soil like atrazine — which he reports was reduced by 50 percent in two weeks.

Once his project is complete Ako says any future funding for hemp should support individual farmers so they can test how hemp could contribute to diversified ag in Hawai‘i.

Despite being labeled as a Schedule 1 controlled substance, this once commonly farmed crop played an important historical role in early American agriculture before the 1937 Marihuana Tax Act. Even as Americans debate legalizing hemp production, it’s widely grown in more than 30 countries including China and Canada which export hemp to the U.S. You may already have eaten, used or currently own food, lotions, or clothing made of imported hemp.

One of hemp’s most useful products comes from mixing stalks with a lime binding agent and water to create a building material called hempcrete. Durable, breathable, fire retardant and resistant to termites, hempcrete makes “homegrown homes” possible with just a few acres of land.

If it was legal, Kelly King, vice president of Pacific Biodiesel on Maui, says she’d be growing her next house right now on her fiveacre property. Calling it the “building material of the future,” King says Hawai‘i should be producing its own hempcrete, not importing it from Canada. Dr. Ako agrees, saying one acre of hemp could produce enough material for five or six houses a year.

For Don and Joy Nelson of Kihei, hempcrete was the building material of choice. Together with their architect George Rixey they designed and built a 702 square foot ‘ohana unit (cottage) — using hemp for insulation and the walls — Hawai‘i’s first hemp house.

Today the Nelson’s daughter and son-in-law live in the ‘ohana unit and the Nelsons have started building another larger home that will use hempcrete and hemp flooring. They’ve imported hempcrete from Canada which they mixed and poured on site then covered with stucco. Joy Nelson says hempcrete was an attractive choice because it’s environmentally friendly but she wishes Hawaiian- grown hemp was available.

Beyond the products it offers, hemp can also help the ‘āina — the land. On the North Shore of the Big Island Clarence Baber, owner of Island Herbs Hawai‘i, says research has shown hemp can help rejuvenate the land by stabilizing and cleaning polluted soil. This is consistent with Dr. Ako’s findings and other studies that have examined hemp’s tolerance for contaminated soil, suggesting it may be beneficial to grow in heavily polluted places like Chernobyl and Fukushima.

“This is a wonderful crop…It should be one our ‘canoe plants’,” Baber says, likening hemp to other important introduced plants. But he fears Hawai‘i may miss the boat as hemp makes greater inroads through ambitious projects in Colorado, North Dakota, Kentucky and Tennessee to name a few.

Rather than more baby steps and tiny test plots, Baber wants to see hemp turned over to farmers. “If you actually put a grower in charge, instead of people that study growing, you would get different results,” Baber says. “It’s a wonderful crop…why our state is still scared, I don’t know.”

With so much support for hemp, what’s blocking progress? The law mostly, and that frustrates long-time hemp proponent Hawai‘ i State House Representative Cynthia Thielen.

“When I go door to door in my district, the question I’m most asked is “how’s the hemp project going?” says Thielen. The public by in large gets it, she says but “there are a couple of people at the legislature afraid of a crop that won’t get you high,” laments Thielen with a sigh.

Calling hemp an “entrepreneur’s dream,” Thielen says Hawai‘i needs to seize its “key advantage” over other states: the tropical climate. In an attempt to advance legislation that would expand hemp agriculture, Thielen is partnering with Rep. Kaniela Ing who says developing a hemp industry offers a chance to “come together with new unity and craft an agriculture future we can all be proud of and keep Hawai‘i green.”

Thielen encourages Hawai‘i voters to make sure their state and federal representatives know that they support hemp adding, “It’s essential to get legislation through in 2016.”

But not everyone is so enthusiastic. Rep. Clift Tsuji, chair of the House Committee on Agriculture is more cautious, asking, “What is the economic return? I don’t think we’ve…come to that point about economic return.” Tsuji is calling for more input from CTAHR and the Department of Business and Economic Development and Tourism.

Asked if he would like to see research in Hawai‘i continue Tsuji said, “I think research, whether we like it or not, will continue.” He said he does not discourage it but warns, “You must take prudent avenues and be results-driven. What are you trying to accomplish?”

Meanwhile, in Hawai‘i’s state senate, Chair of Water, Land and Agriculture Committee Senator Mike Gabbard calls hemp’s potential “awesome” but warns Hawai‘i is losing out as $620 million in annual hemp sales come from outside the United States. Gabbard envisions a thriving cottage industry that could use the Hawai‘i brand to promote hemp products to the world. He also wants to establish a pilot program to allow the cultivation of hemp for agriculture and academic research, which would include the commercial sale of hemp as marketing and industry development. 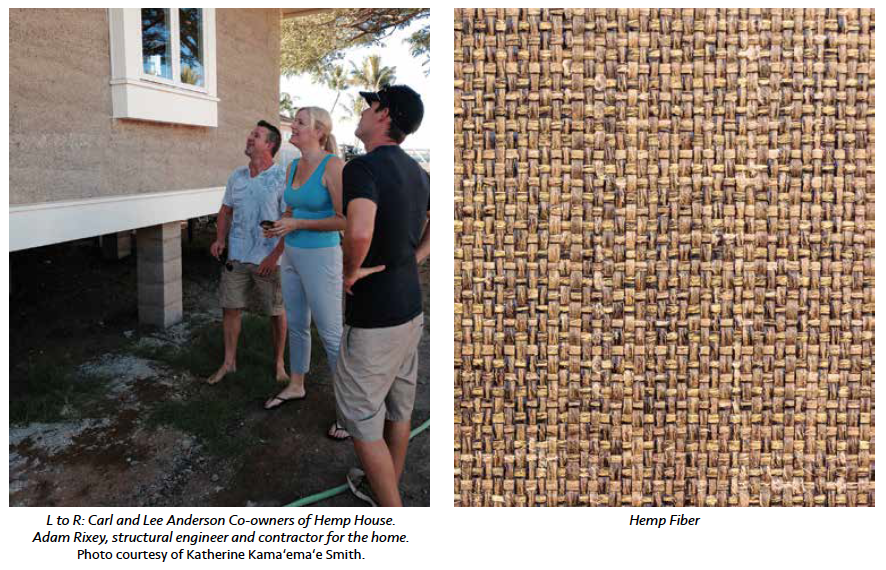 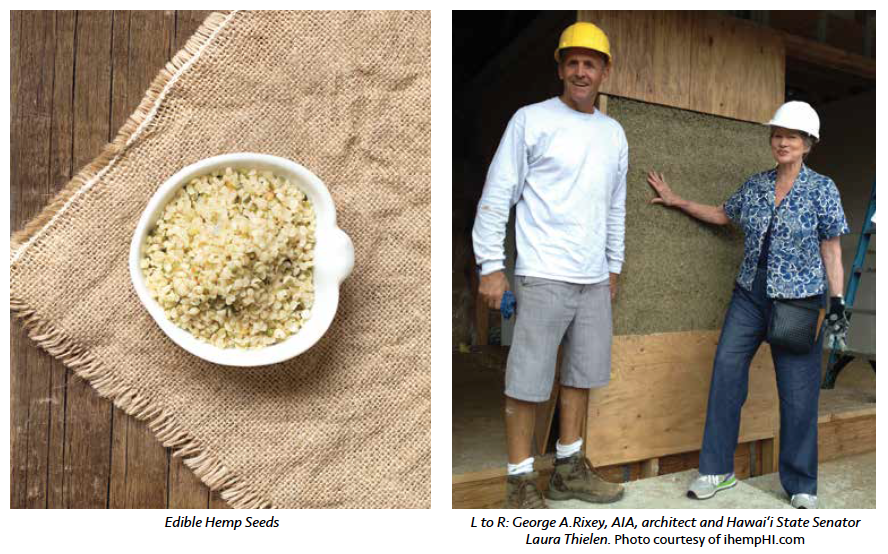 Between 1999 and 2015 nineteen bills and thirteen hemp related resolutions were introduced in Hawai‘i’s legislature including bills sponsored by Gabbard but he’s frustrated that hemp in Hawai‘i “remains needlessly bound by outdated state and federal restrictions.”

He points out that his daughter, Congresswoman Tulsi Gabbard, also supports boosting research and growing hemp in Hawai‘i. Rep. Gabbard, who co-sponsored the Industrial Hemp Farming Act of 2015, said in a written statement “…Now is the time to move forward in expanding hemp research and creating this domestic industrial hemp sector in our economy.”

But while researchers in Hawai‘i like Dr. Ako are forced to wait eleven months to receive a handful of seeds to plant on a tiny patch of land, the Kentucky Department of Agriculture is working with over 170 participants plus 15 university projects that include around 4,600 acres of hemp production and 30 processors researching product development and marketing.

Back in Honolulu Sen. Gabbard says new hemp legislation is one of his top priorities. “This is the place, this is the time,” he says, adding that if Hawai‘i lawmakers are successful this year, “I’m hopeful farmers in our state will be growing hemp soon.”