The trio behind Three’s Bar & Grill and Fork & Salad in Maui grew their passion project into a booming enterprise against all odds. Through it all, they’ve learned that cultivating a business founded in friendship means never giving up.

After their lives intersected in the kitchen of Longhi’s Wailea, a popular Italian seafood restaurant in Kihei, Maui, Travis Morrin, Cody Christopher and Jaron Blosser became thick-as-thieves surf buddies with another serious hobby in common — a deep-seated love of cooking. During “board meetings” in the water, they often daydreamed about what a future fixated on food might look like. They itched to create something that would let them surf and cook as much as they wanted, and in 2009, the friends decided to go all in on building their dream business with a commitment to not only make great food, but also to do right by their customers and collaborators.

A SHORT TRIP FROM CATERERS TO RESTAURATEURS

Before they could talk themselves out of it, the foodie friends powered forward with Three’s Catering — the name, a nod to the idea that each partner brings unique strengths to the table that perfectly complement the whole. Three’s offered Maui clients an eclectic combination of cooking styles — Hawaiian, Southwestern and Pacific Rim — and service was just as essential as fresh ingredients and inventive dishes. Their new venture garnered such positive response that after just a few months of catering events, in 2010 the budding entrepreneurs were able to rent a brick-and-mortar space at Kalama Village in Kihei for their first restaurant, Three’s Bar & Grill.

THE LUCKY BREAK THAT LED TO A BIG BOOM

In 2013, Travis, Cody and Jaron’s little catering experiment hit a big break when they won the bid to cater all of the Pacific Whale Foundation’s snorkel charters, a gig that would help keep them afloat through all the challenges that lie ahead. Then the friends took a gamble and introduced one of the first-ever food trucks on Maui — before it became a hot trend — and were stoked to see how much people loved casual, cost-effective food truck weddings. With some stability, the guys felt confident enough to move forward with a fun new concept they’d been tossing around — a farm-to-table, fast-casual restaurant they called Fork & Salad that would make eating healthy and eating local convenient and affordable. In July of 2016, Fork & Salad debuted in Kihei touting over 50 local ingredients and won the “Friend of Agriculture” award given by the Maui County Farm Bureau. Shortly after, Three’s Bar & Grill was featured in an episode of Food Network’s hit show “Diners, Drive-ins and Dives.” In June of 2018, they opened a second Fork & Salad location in Kahului, Maui.

In all likelihood, the eager chefs’ headfirst dive into restaurant ownership should have been nothing more than a flash in the pan, especially since none of the three had any real business experience. (Deciding to break into the food industry during the worst part of the recession didn’t help, either.) But something about their formula worked. Building three successful local eateries from the ground up and growing a handful of staff to a team of over 100 wasn’t easy, but the co-owners put everything they had into the business with no shortage of elbow grease and grit.

“Being naive was the best thing we had on our side,” says 39-year-old Cody. “If we’d started out with smart business sense and looked at all the numbers, that would have talked us out of it quicker than anything. We necessarily didn’t care; we just wanted to open a restaurant with our best friends.”

Growing up in Beaumont, Texas, Cody’s family was big into barbecue, and he was constantly immersed in the Cajun and Creole styles of cooking. He recalls the particular night his infatuation with the world of food began, around age 10:

“My Uncle Chip was getting married and the reception was held at this fine-dining French restaurant in Houston. It was a 15-course meal and the chef came out and introduced himself, then brought me back into the kitchen and let me ask questions. Those swinging doors, the yelling, the fast pace of it all, and the smells

of all the different spices — I knew right then I wanted to be a part of it.”

After graduating from the culinary program at the Art Institute of Houston, Cody worked at a two Michelin Star restaurant in Oslo, Norway, then spent time in California surfing and learning from experienced culinary experts to become what he calls “a well-rounded chef” — as adept at baking as he is at grilling.

The first three years of running a restaurant were an uphill battle, Cody says, but he and his cohorts were able to weather the obstacles largely because they were all willing to do whatever needed to be done. “You’ve got to wear a lot of hats, and the cooking is the easy part…” he says. “If it meant washing dishes, if it meant climbing under our building and fixing a busted pipe because we couldn’t afford a plumber, we just did it.” With help from countless YouTube videos, Cody’s been able handle a lot of building, carpentry and welding for their spaces.

In year two of being open, Three’s Bar & Grill succumbed to a kitchen fire that forced them to shut down for 41 days. “At 6 am that day I got a call from the chef and I knew the whole kitchen must be on fire. There was no time to panic; it was step one — the Pacific Whale boats are going out this morning we need to make sure that those are stocked, and step two — we need a place to cook tomorrow morning. So I’m making calls to use our neighbor’s kitchen, Jaron’s talking to the general contractor about the rebuild, and Travis is making sure the catering keeps rolling.” When a crooked accountant made off with $30,000 of their hard-earned profits later that year, no one would have blamed them for throwing in the towel. But the partners used the adversity as fuel to hustle even harder. “If anything, the fire and the theft were wake up calls that it was time to stop ‘winging it’ and get serious,” says Cody. “From then on we were focused on knowing our business inside and out.”

A native of Maui, 31-year-old Travis Morrin was always around the hospitality industry, since his dad held the general manager position at a local hotel. He has fond memories of watching a French cooking show with his mom almost every afternoon and remembers how therapeutic it felt to watch people work with their hands as they transformed ingredients from one state to another. “It’s really an art form in a sense; you have to balance a lot of elements: texture, flavor, appearance, the whole nine yards,” he says.

At 20 years old, Travis attended the culinary arts program at the University of Hawaii Maui College, and he was still in school when the opportunity came to open up Three’s Bar & Grill. “I actually don’t remember a lot of it because it was so difficult,” he says. “We were making like $300 every two weeks and a lot of people thought we were crazy.”

Their scheme worked, Travis believes, because of how well each partner complements the other two. “It’s easy to knock down one person, but it’s a little harder to knock down three,” he says. “Jaron is very good with numbers and he brings us down to earth in terms of what we can actually do and how we can be smart about it. I’m the creative, entrepreneurial guy and Cody is an incredible chef and a tremendous builder.” Always one to pitch new concepts for expansion, Travis says they’ve always stuck to the law of “majority rules” when deciding what direction to move in next, making sure to put the partnership first.

Once a week, Travis holds meetings with the upper management teams, providing an open floor to discuss ideas and issues and check in on the numbers. “The regular face-to-face interaction really helped turn our business around because we were finally setting some short-term goals to pair with our long-term vision,” he says. “They continually inch us forward and keep us growing in a healthy, sustainable direction.”

Growing up in Durango, Colorado, Jaron Blosser’s family sushi outings every Friday night were his first taste of how food could command an audience. “I would order a simple roll — just rice, nori and crab — and I would be hooked because of the flavors and presentation. We would go to Benihana and I remember wanting to be one of those chefs doing all the tricks.”

Right out of high school, Jaron attended Scottsdale Culinary Institute, then earned his chops as a cook under accomplished chefs in Durango, Seattle, and Olympia, Washington, in the niches of Japanese, Pacific Rim and French cuisine. As far as what makes a great meal, he answers: “You need good ingredients and a balance of flavors, textures and temperatures, but what truly makes a difference is passion in the process and in the details. Some of my favorite dishes had very few ingredients, but it was the character of who prepared it, or the way it was served, that made it meaningful for me.” 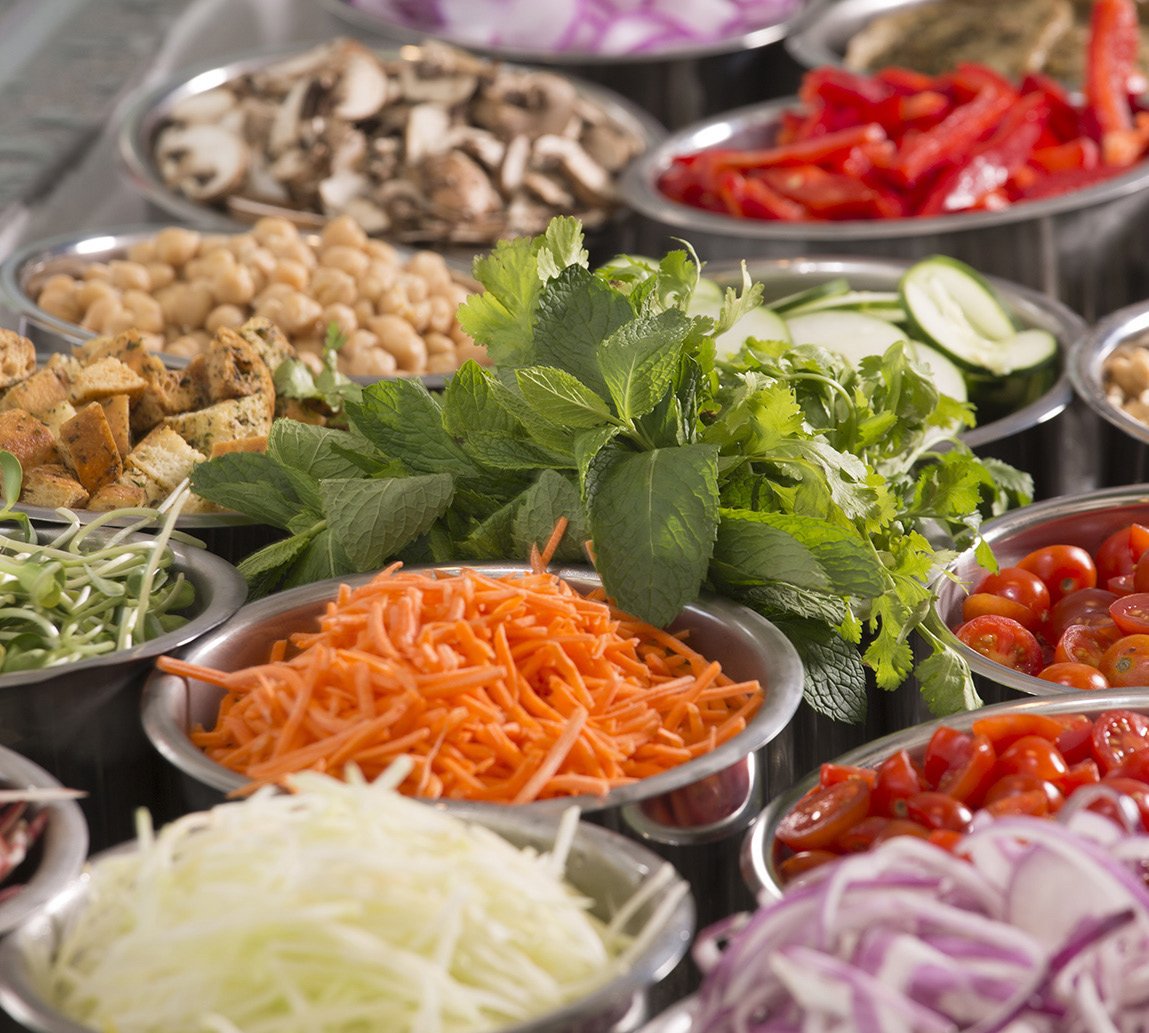 “YOU’VE GOT TO WEAR A LOT OF HATS, AND THE COOKING IS THE EASY PART… IF IT MEANT WASHING DISHES, IF IT MEANT CLIMBING UNDER OUR BUILDING AND FIXING A BUSTED PIPE BECAUSE WE COULDN’T AFFORD A PLUMBER, WE JUST DID IT.” – THREE’S CO-OWNER CODY CHRISTOPHER

Ever the pragmatist, Jaron says the most stressful part of running a restaurant is the less glamorous stuff — like negotiating the lease with the landlord, talking job scope with the contractor and collaborating with the architect. “The entire future of the restaurant depends on the proper execution of these things, and if we make a mistake, there’s no going back,” he says.

These days, 37-year-old Jaron supervises much of the business’s financial aspects and building projects, or as he sees it, “I mainly solve problems all day as needed!” His biggest takeaway from years of putting out a steady stream of fires? “Just because something appears to be bad, it might end up being a really valuable lesson,” he says.

SPREADING THE NICHE OF ALOHA

Now that they’ve made a big splash in the Maui market, the brain trust behind Three’s is expanding to the mainland to show people “the niche of aloha” with a third Fork & Salad opening in Orange County, California, this spring. The guys have also partnered with FranSmart, a powerhouse in franchise development, to expand their brand even farther across the country and even the world. At the end of the day, their biggest motivator for continued growth is not money, or even love of food, but rather a sense of duty to their extended ohana:

“I’m sure that there are better restaurants out there, but this is our little slice of what we’ve carved out in this world,” says Cody. “We have the responsibility to make sure that our people have a place to come and work so they can take care of their own families. And as long as we do the right thing by our team and our customers and give back to the community, we’ll keep moving forward.” 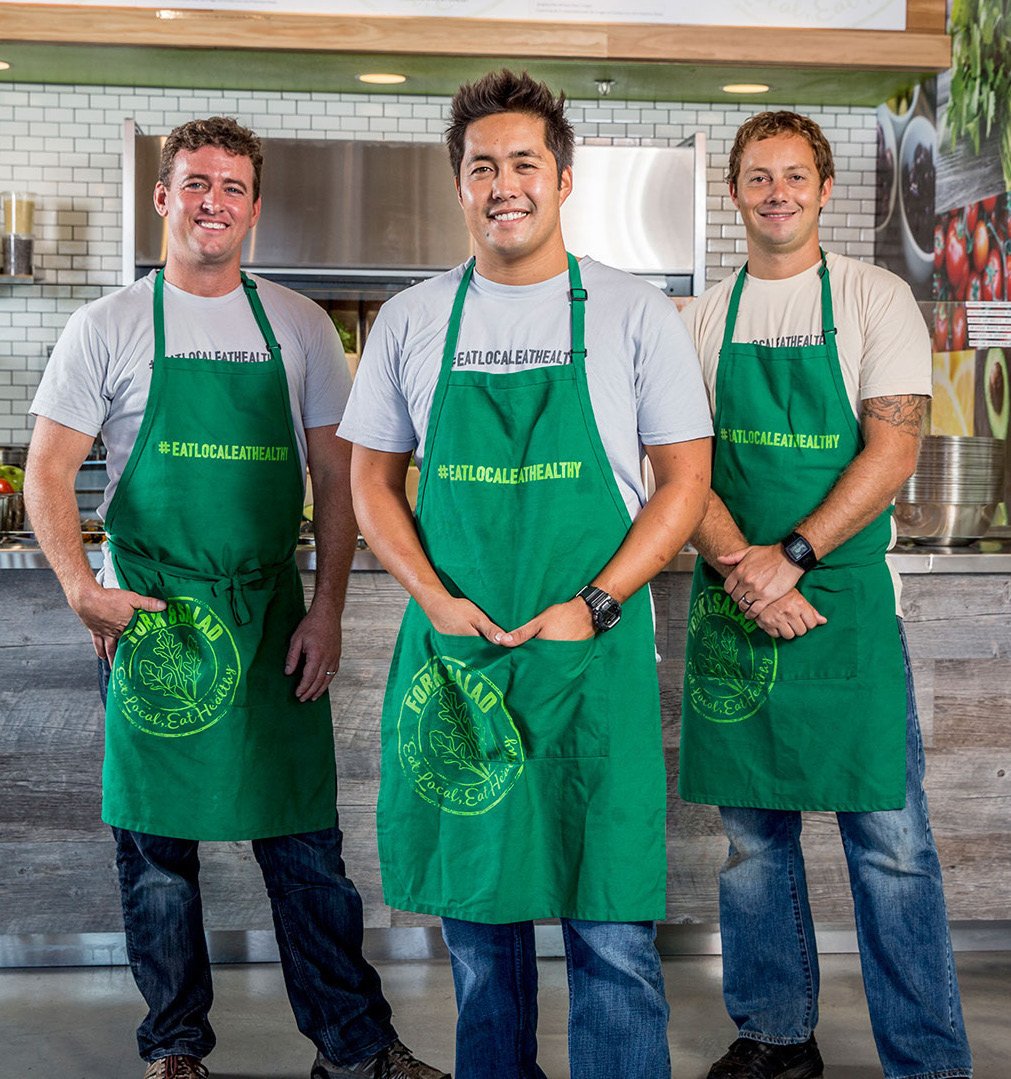