From ice cream bananas and strawberry guavas to sugarloaf pineapples and cashews, Hawaii is prime real estate for diverse tropical fruits. But, hang on—what was that about cashews?

It turns out that lovely little nut you find in trail mixes, curries, and vegan cheese is actually just the seed of a cashew fruit. The seed is encased by a green, kidney bean–shaped drupe that sprouts from the bottom of a cashew apple. The cashew apple has been described as having a sweet mango flavor, with notes of tannin and green pepper. And if you find yourself on Kauai, you might be able to try one—or at least score some of its juice.

A crop native to Brazil, Portuguese missionaries carried the cashew tree to East Africa and India during the late 16th century—regions that are still two of the cashew’s largest producers today. (Cashew trees are believed to have been brought to Hawaii by the Portuguese as well.) The trees flourished in the coastal, low-altitude areas of these countries and had myriad purposes that go well beyond our contemporary consumption. Boats and crates were crafted from the lumber, oils from the fruit kept bugs at bay, and cashew tree bark was used as a digestive aid. The seed, commonly know as a nut, is widely consumed, but the rest of the fruit and tree are often seen as agricultural byproducts.

We’ve all heard of the food waste phenomenon, and combative movements have been cropping up to try and find a solution. There has been a paradigm shift in recent decades: With an increased desire to disconnect from a world run by technology, the islands have seen an influx of those who desire a more down-to-earth way of life. With its microclimates, sun kissed soils, and a farm-to-fork doctrine, there is plenty of growth potential here. People are jumping at the opportunity to live more sustainable lifestyles—and food waste doesn’t fit within the concept of sustainability. Case in point: The couple behind Neu Mana Hui Farm on Kauai.

It’s 2001, and New Mexico natives Linda and Scott Neuman had just bought property on the Garden Island. With the vision of growing heirloom produce under organic and sustainable philosophies, the couple wanted to reap what they sowed, build coops for egg-laying hens, and experiment with anything to fuel Linda’s culinary passions. “We dream big, but we started small,” says Linda. Their organic egg operation quickly took off, which allowed them to dip their toes elsewhere over the years—for example, in vanilla and loquats. But had you told the Neumans that they’d pioneer Hawaii’s cashew industry, they likely wouldn’t have believed you.

On a trip to Costa Rica years ago, Linda and Scott came across a cashew orchard and were intrigued by the exotic apple and the peculiar way the cashew grew from the bottom of it. (Really, though, who knew?) Once they were back on Kauai, they spotted a single, familiar looking tree near their property. “We truly took it as a sign. That tree had clearly been there for years; it had stood up to hurricanes and whatever else had come its way,” recalls Linda. So they dug a little deeper to make sure their land was suitable for cashews trees—and it was.

Fast-forward 15 years, and almost 200 trees later, Neu Mana Hui Farm is the only commercial producer of cashews on the islands—and in the United States. It took their first saplings about five years to start yielding nuts, and the duo has steadily, but slowly, built their orchard mainly by propagating the originals. Plus, they have been able to put Hawaiian-grown cashews on the market. (We love you macadamias, but let’s let cashews have a moment.)

Come harvest time, the cashews and cashew apples are hand picked and individually inspected. Post-pick, the cashews are squirreled away to dry for a season and most of the apples go through a press commonly used by winemakers. The Neumans bring the resulting juice to market, and any leftover apples are used in Linda’s test kitchen or as a daily nosh for their hens—who love them. “Maybe that’s why my eggs are so good,” Linda suggests with a smile.

The process to get sellable nuts is a lengthy one that requires precautions. Cashews have an interesting lineage—they are closely related to mangos, poison ivy, and pistachios. The hard, outer green shell contains urushiol oil, a toxic substance and skin irritant. For this reason, cashews are shelled, peeled, and heated at a temperature to burn off the remaining toxins before consumption.

For years, the Neumans manually and meticulously cracked each nut, in addition to picking, peeling and sorting by hand. But with both the trees and their business venture becoming increasingly more fruitful, the couple recently stepped up their game and purchased shell-cracking machinery, which greatly reduces their exposure to the urushiol oil.

So, do the benefits really outweigh the potential risks in production? The Neumans say yes.

ALL THEY’RE CRACKED UP TO BE?

While they may not pack as much punch in the fiber department as others, cashew nuts are full of good stuff. Think vitamins E, K, and B6, along with minerals like copper, iron, magnesium, phosphorus, and zinc—all vital to keeping your body up and running. Cashews are also lower in fat content than most nuts. Compounds like anacardic acids, which have antibacterial, antifungal, anti-inflammatory, and potential anticancer properties, are found in cashews, too.

Along with the internal benefits, cashews do your outer body good. The cosmetics industry has also taken note of the nut—specifically, of its nourishing and defensive properties. Clarins lists cashew oil as an ingredient in their Renew-Plus Body Serum, while organic cosmetics superstar Lush uses cashew butter in their popular hand lotion. 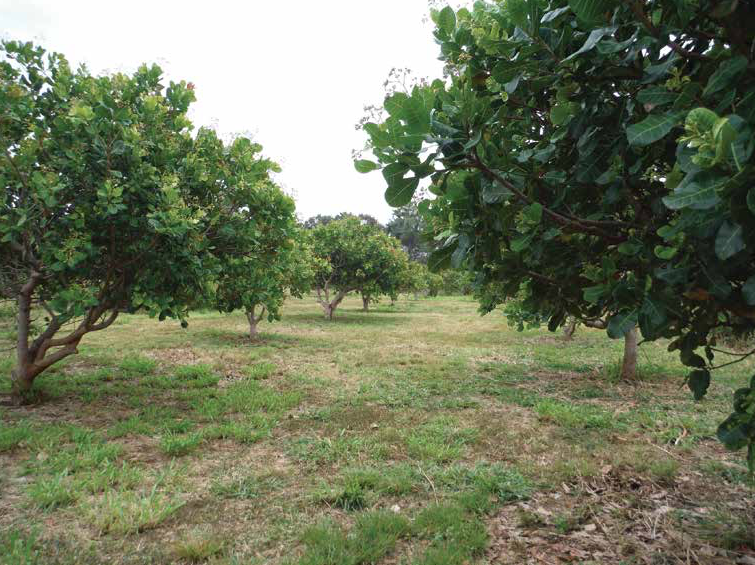 BUT, HOW ‘BOUT THEM APPLES?

The highly nutritious cashew apple also has antibacterial properties, is proven effective in treating digestive tract disorders, and its juice is ultra rich in vitamin C. (It contains five times more than an orange!). The juice can be served straight up, in popsicles during the summer, or as a base for tropical cocktails.

Those who live in close proximity to cashew orchards can simply bite right in to reap the apple’s rewards. However, due to quick fermentation rates and fragility, fresh cashew apples and juice are not readily available. But, if you aren’t near an orchard, you’re not totally out of luck.

If you find yourself in Thailand or Brazil, you may happen upon cashew juice (but watch out for the preservatives used to prolong its shelf life). Or head to Goa, India to imbibe on a local liqueur called feni. Unique to the state of Goa, cashew feni is a double- or triple- distilled spirit made from the juice. In addition to experimenting with candied cashew apples and chutneys, Linda has her sights set on fermenting the fruit for a similar drink, instead of simply discarding what isn’t processed or sold. 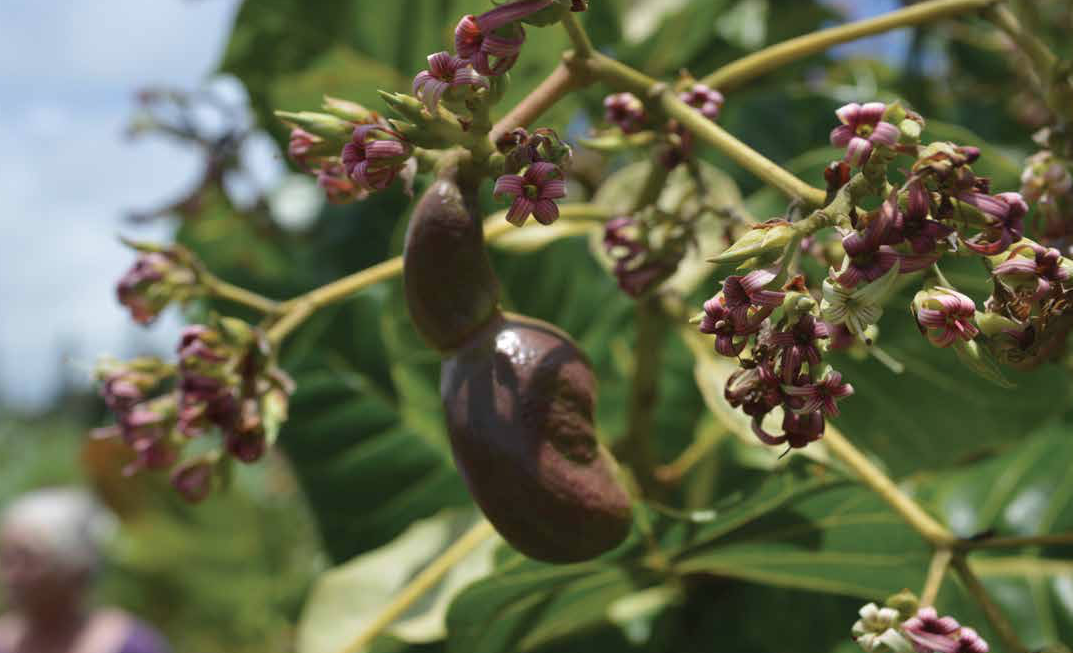 WASTE NOT, WANT NOT.

The lion’s share of cashew production happens in developing countries, where the priority naturally lies in profit. Economics 101 teaches us the law of supply and demand—and there is simply a much larger global market for cashew nuts. Since the apple is often seen as a byproduct of the nut industry, and with a shelf life of only three days, it is often left behind.

According to the Food and Agriculture Organization of the United Nations, upwards of 40% of food loss occurs during postharvest and processing in developing countries. Food waste is a global epidemic, and it’s one that people are starting to pay attention to. Dedicated organizations are working to connect the opposing puzzle pieces of food waste and world hunger, and smaller movements are gaining traction on farms, at restaurants and grocery stores, and in homes.

At Neu Mana Hui Farm, the apple is not seen as a byproduct, but a highly marketable one. By consuming, processing, and selling cashew apples and juice, the Neumans are able to reinforce sustainability and leave little behind. Linda notes that this venture has been “a unique opportunity to connect to both the local and tourism communities of Kauai.” “Plus, our grandkids will think we were cool,” adds Scott.

A glass of cashew apple fruit juice sells for $5 a pop. It can be found at the Waipia Farmers Market, along with Neu Mana Hui’s cashew nuts, vanilla extract, and more.