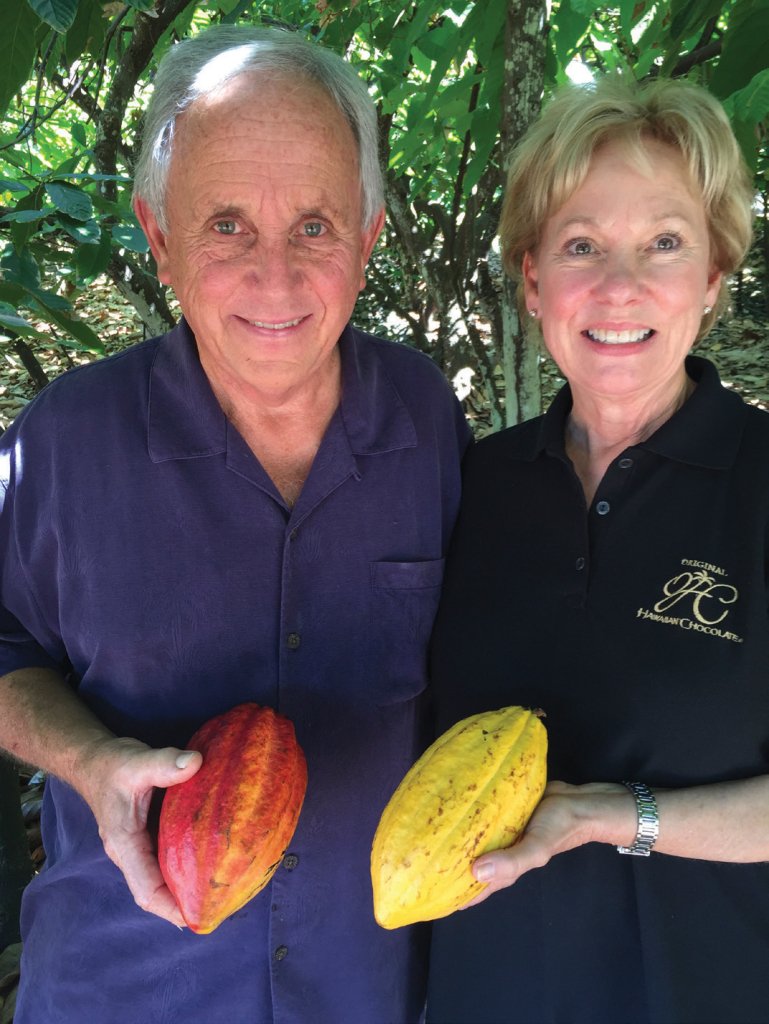 For thousands of years people have cherished the fruit of the cacao tree: the source of chocolate. Ancient Mesoamericans believed that cacao possessed divine properties and incorporated it into their sacred rituals, feasts, medicines and monetary systems. The species’ Latin name, Theobroma cacao, means “food of the gods.” Who can argue with that? Today, lovers worldwide exchange chocolate as edible tokens of their passion. And in Hawai‘i, farmers sow cacao seeds in hopes of reaping lucrative rewards.

The first cacao trees arrived here in 1850, courtesy of botanist William Hillebrand, but it wasn’t until the 1990s that local growers began capitalizing on this promising crop. A small but increasing number of cacao farmers now cultivates around 100 acres across Hawai‘i. Their harvest is still too slim for the National Agricultural Statistics Service to track, but that’s likely to change. University of Hawai‘i researchers estimate that cacao could ultimately cover up to 3,000 acres statewide, generating $34 million annually. That would rank it among Hawai‘i’s top crops alongside sugar, seeds, macadamias and coffee. That’s just where it belongs, according to some island farmers.

“We’re the pioneers,” says Pamela Cooper. Eighteen years ago, she and her husband Bob left North Carolina for Hawai‘i Island. When the Coopers surveyed the mature, productive cacao trees on their new six-acre orchard in Keauhou, they knew they’d struck gold. Pamela laughs, “The chocolate had plans for us.” Their retirement morphed into a second career: launching their business, Original Hawaiian Chocolate, and with it, a new industry. 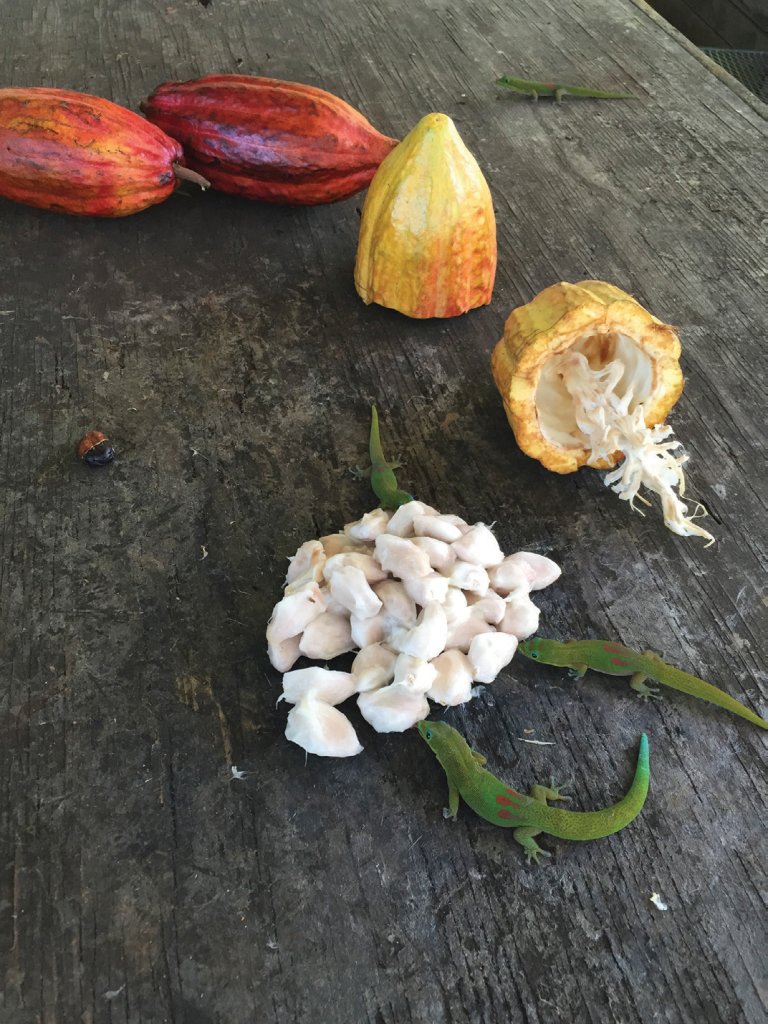 The Coopers invested $1 million turning a farm shed into a chocolate processing factory. Then they set about building a market for their product. “It was our vision to see the Islands become the Napa Valley of chocolate in the United States,” says Pamela. “Bob travelled to all of the islands encouraging people to grow cacao. To our delight, they are!”

Hawai‘i is the sole place in the U.S. where cacao can grow, as the heat-loving tree thrives in the tropical belt. At 21 degrees north of the equator, Hawai‘i is nicknamed “the North Pole of cacao.” While it may be a little chilly, the Islands’ northerly location confers certain benefits. Beans grown here tend to have higher  cocoa butter content. Plus, major cacao diseases haven’t made it to Hawaiian shores.

Slender, droopy-leafed cacao trees produce yellow or scarlet pods that emerge straight from the trunk. Crack one open to find wet, feathery pulp surrounding clusters of beans. The pulp is sweet, but the beans are bitter. To create the confection everyone knows and loves, chocolatiers must ferment, dry and roast the beans, winnow away the husks, and grind the resulting nibs into a liquid—and that’s just the beginning. Chocolate making is truly both science and art. 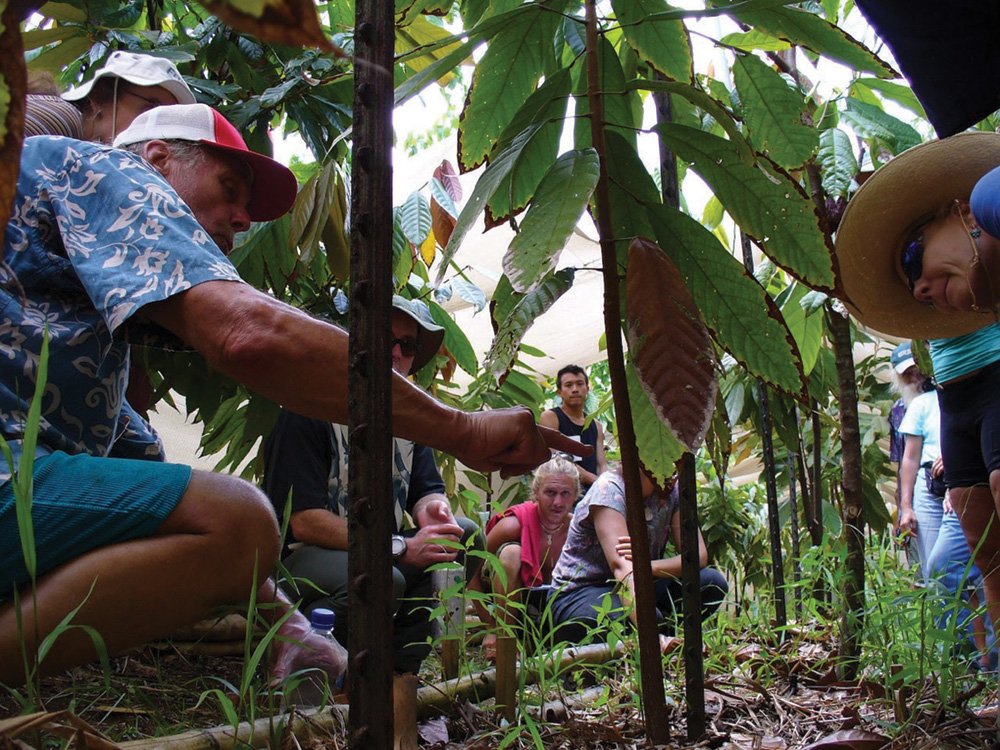 From the start, the Coopers supplied cacao seedlings to anyone willing to grow, with an agreement to buy back the beans. They now source beans from 27 neighboring orchards, in addition to their own. At the Original Hawaiian Chocolate farm, the Coopers make chocolate from bud to bar. They ferment cacao beans in slatted mahogany boxes, dry them in the sun for 30 days, and store them for two years before further processing. They discovered the last step by accident; their initial crop had to wait while they constructed their factory. “That was an ‘A-ha!’ moment,” says Pamela. “Like wine, cacao beans continue to develop their flavor in storage.” The end result is 100-percent Hawaii chocolate, available as hand-poured bars or blossom-shaped bites.

On the opposite end of the archipelago, Tony Lydgate produces small batches of single-origin chocolate at Steelgrass, an eight acre family farm above Kapa‘a on Kaua‘i. Lydgate has published scientific research on cacao and participates in University of Hawaii field trials to determine which varietals grow best. “We be lieve cacao offers tremendous promise for the island of Kaua‘i,” he says. Unlike the Coopers, Lydgate doesn’t own a factory. Instead, he’s investing in more trees. He’s planning on increasing his orchard tenfold, from 300 to 3,000. His five-year plan is to  establish a cooperatively owned chocolate processing plant on Kaua‘i.

Each island yields cacao with slightly different characteristics. Terroir, the wine industry term that describes how landscape affects a grape’s flavor, applies equally to chocolate. The state’s largest cacao grower, Waialua Estate Chocolate (a subsidiary of Dole Food Company) manages 20 acres on O‘ahu’s north shore. The 13,000 cacao trees planted along the loamy banks of Kaukonahua Stream produce beans with hints of dark cherry, berry and raisin. They’re sent to San Francisco for processing by one of the best chocolate makers in the business: Guittard. The finished product finds its way onto the menus of top restaurants.

Chocolatier – Someone who makes chocolates, such as those dipped, nutty, or cream-filled confections.

Confectioner – Professional that makes confections, which are food items that are rich in sugar and carbohydrates. This can include sweet pastries, sugar candies and chocolates.

Chocolate Maker – Someone, or a company, that buys and roasts cocoa beans and grinds them into chocolate. 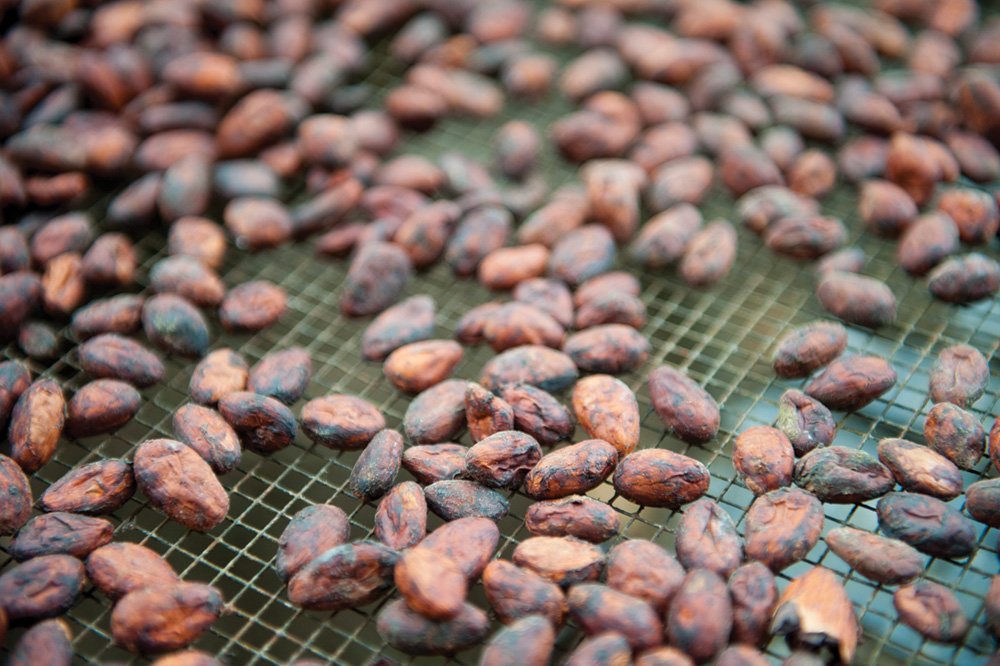 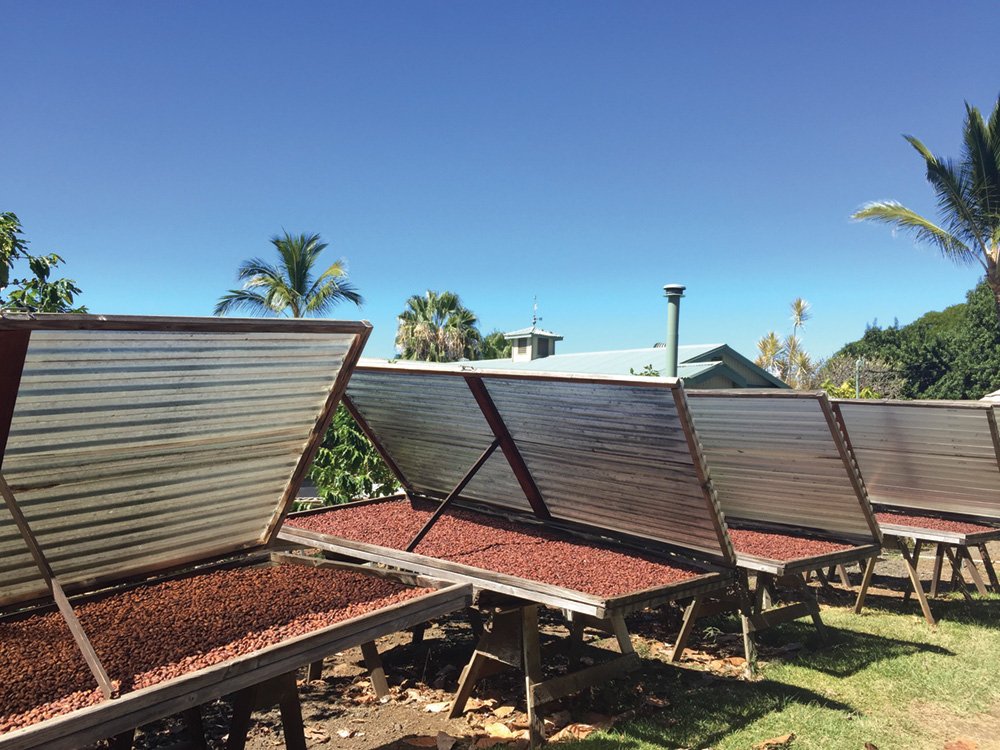 Of all the Hawaiian chocolates, Melanie Boudar’s are the most beautiful. Hand-painted with cocoa butter, they’re irresistible, edible jewels—literally. One of her specialties is sprinkled with 24-karat gold: the “Fruit of the Cocoa” truffle, made with 70 percent dark Waialua chocolate and filled with ganache and cacao pulp. Sweet Paradise Chocolatier, her posh boutique in Wailea, Maui, is Willy Wonka’s Chocolate Factory hit with a haute couture wand. The glass case gleams with dark squares topped with slivers of starfruit, shiny red hearts bursting with liliko‘i, and green swirly marbles infused with Tahitian lime. Boudar is no amateur; she attended both the Culinary Institute of America in Hyde Park, and Ecole Chocolat in Vancouver. In addition to producing superior chocolate, Boudar takes an active role in sustainable cacao production around the world. 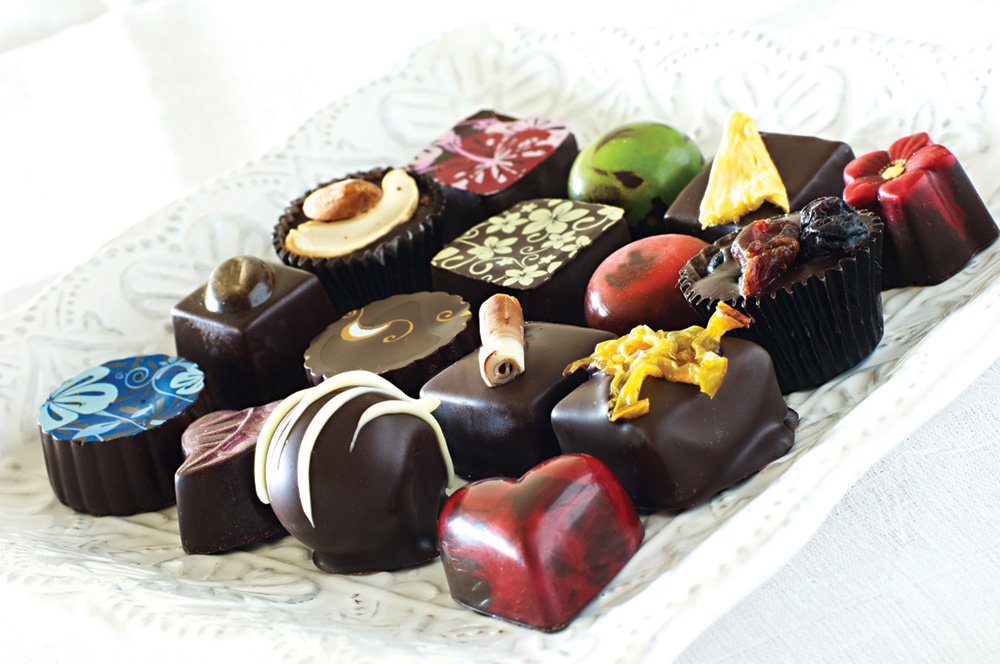 Meanwhile, on the other end of Maui, a relative newcomer to the Hawai‘i cacao scene has big ambitions. “My intent is to make the best chocolate in the world,” says Gunars Valkirs. The retiree- turned-farmer sold off a medical diagnostics business and bought ten acres in Lahaina, Maui. At Maui Ku‘ia Estate, 1,400 cacao seedlings wait in a greenhouse for the windbreak and canopy trees that Valkirs planted to mature. “I’m taking my time, building a forest,” he says. “I’m hoping that Lahaina can produce really great flavor. It has rich, agricultural soil.”

Terroir is important, but Valkirs thinks choosing the right cacao varietal is the key to exceptional chocolate. After he determines which genetics grow best in Lahaina, he’ll plant 30 acres and produce 60,000 pounds of chocolate a year. “I always thought I would be a winemaker. But I decided I didn’t want to live in [wine-growing] areas,” he says. “I love chocolate. I eat an ounce of chocolate every day. It’s more of an obsession with me.”