Edible flowers add texture and flavor to a recipe while packing a palette of color to brighten a dish. Blossoms bring a spark of celebration to dessert, a touch of freshness to a cheese tray and a bite of texture to chilled soup.

The concept of flowers as food might be “out of the ordinary” for some, but the usage is nothing new. The Bible mentions the use of dandelions as a “bitter herb” and the ancient civilizations of Greece and Rome thought flowers were flavorful herbs. The Romans incorporated mallow, violets and roses into meals. Monks supposedly renamed calendula “pot marigold,” as it was commonly plucked for the soup pot.

During the Victorian era, edible flowers were all the rage as people were enamored by the allure and romance of flower-encrusted sweets and salads. Candied flowers were particularly popular.

Throughout time, the blossoms and buds of plants appeared in more food and drink. Capers were sourced from capparis shrubs, saffron from crocuses, vanilla from orchids and beer from hops.

Those who think eating flowers is unusual are surprised to learn that cauliflower means “cabbage flower” as the white flower head, or inflorescence meristem, is consumed. And when munching on broccoli, be advised you’re eating the plant’s florets or flower buds.

A product request by Chef Sam Choy is what got Adaptations, Inc. of Hawai‘i Island into the edible flower business in 1989.

“Sam was our first champion and, at that time, involved with the founding of Hawai‘i Regional Cuisine,” recalls Adaptations co-owner Maureen Datta. Adaptations was invited to be the agricultural advisor to the group of original HRC chefs, providing information from the farmers’ perspective. That connection with the chefs was invaluable and Adaptations expanded their product offerings to meet demand. The company’s continued willingness to collaborate with local culinarians earned it the 1995 Associate of the Year Award from the ACF Kona Kohala Chefs Association.

Edible flowers are the “longest standing crop” the company grows, which also includes micro mix greens, herbs, spices like cinnamon and allspice, salad greens, avocados and medicinal plants. The company additionally acts as a distributor/marketer for over 100 small growers, selling to 65 outlets including restaurants, schools and food producers. Because of Adaptations’ support of small, local farmers, it was awarded the 2015 USDA Small Business Advocate for Financial Services Award for Hawai‘i County. 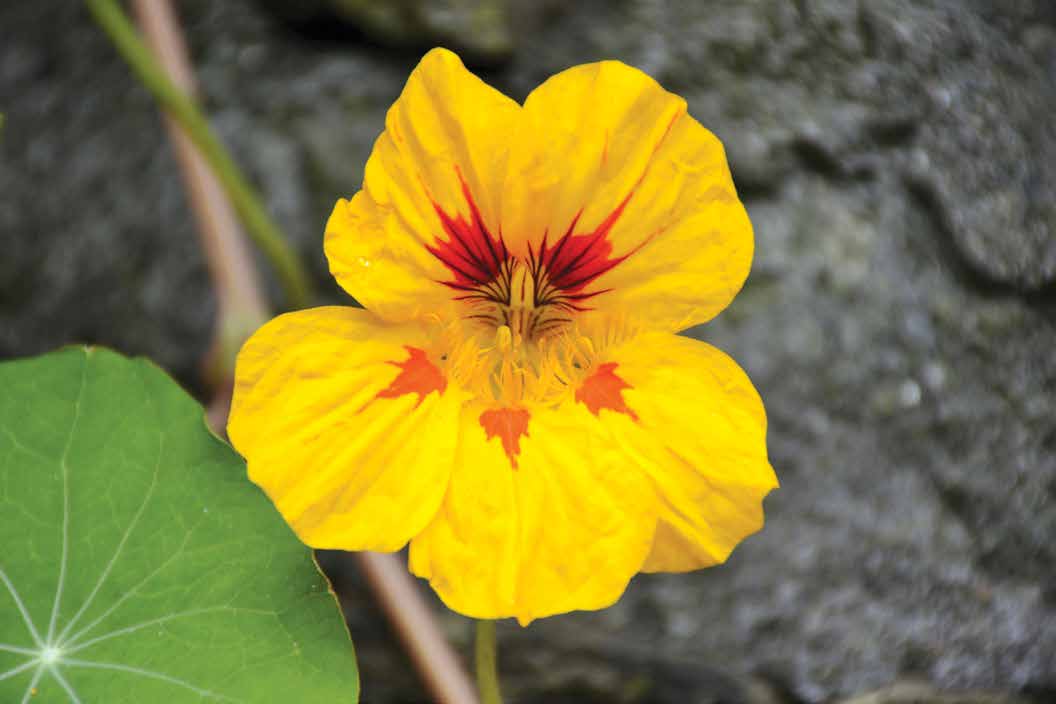 “Flower food” is grown inside and out of green houses on a halfacre at Tane and Maureen Datta’s 7.5-acre Honaunau farm. The blooming inventory provides chefs with a variety of fresh colors and flavors. The yellow Little Gem marigold offers a citrusy flavor. The purple/yellow Johnny Jump-Up viola provides a fresh taste of wintergreen. The red, orange and yellow nasturtiums (and their leaves) have a peppery flavor. And for cooks who prefer flowers for presentation, over flavor, Adaptations sells petite and elegant pink-toned Heirloom fuchsias and dianthus carnations. Also available are larger pansies and miniature roses.

The Dattas sell their flowers as a single variety or as a mix. Also available is a “bento box” of 50 nasturtium leaves as Maureen says chefs like to use the leaves as a “liner or garish.” Adaptations also sources culinary lavender and buys edible flowers from two other producers.

The couple’s solar-powered farm and home are both “off the grid.” Adaptations uses ecological, certified organic practices, such as Integrated Pest Management to control pests with beneficial insects. Waste is rapidly composted using the vermiculture technique of adding worm castings. Adaptations also is listed with World Wide Opportunities on Organic Farms (WWOOF) and has hosted volunteers to staff farm positions.

Employees are tasked with growing and packing the flowers, which are only sold fresh and in eight-ounce deli containers. Fuchsias are the most popular flower product, followed by nasturtium leaves and the edible mix. The main challenge in flower production is “bad weather” as heavy rain damages the blooms and too-little sunshine hampers blooming. Production increases with longer daylight hours.

Once picked, Maureen says flowers have a “four-to-six day shelf life” and Adaptations ships them overnight with a chill pack to off-island customers like Koko Head Café on O‘ahu, O‘ahu Country Club, Koa Kea Hotel and Resort on Kaua‘i and the Four Seasons Resort Lana‘i. The tasty blooms are especially popular at Big Island resorts including the Mauna Kea Beach Hotel, Four Seasons Resort Hualalai, The Fairmont Orchid, Hawai‘i, the Mauna Lani Bay Hotel, the Sheraton Keauhou Bay Resort and Spa and the Waikoloa Beach Marriott. They also grace cuisine at restaurants like Under the Bodhi Tree and Kenichi Pacific.

As Adaptations doesn’t sell edible flowers to retailers, Maureen encourages home gardeners to grow their own for kitchen use. In Hawai‘i, they tend to thrive as perennials and some will reseed. If plants are purchased commercially, she recommends discarding all flowers as they may have been sprayed with chemicals. “Once the plant re-blooms, keep picking the flowers to encourage more blossoms,” she shares.

To make sure a flower is edible, there are numerous online resources, like the Edible Flowers Chart found at whatscookingamerica. net. Seed sources for edible flowers include www.johnnyseeds. com and www.parkseed.com.

“I use edible flowers in salads and other cold dishes like soups, desserts and ice cream,” Maureen details. “I take off as much of the green as I can—the leaf and stem—to amplify color.”

Sharing that pansies are her favorite edible flower, Maureen describes their flavor as “bubblegum.” For a “stunning presentation and flavor with a surprise bite,” she likes to stuff nasturtium flowers with herbed goat cheese, guacamole or a favorite dip. “Then serve on slices of raw vegetables like Hakurei turnips, radish, jicama, kohlrabi or broccoli stems”.

“It’s really fun to put flowers in ice cubes as it livens up the mood for cocktails,” Maureen adds. Using easy-to-bend, plastic ice cube trays, Maureen recommends placing the flowers face down in each cube and filling with water half full to freeze. Once frozen, top off with water to fill the cube and freeze again. This technique centers flowers in each cube.

Flowers make the heart sing and, when used in cuisine, cry out “this is special.” Add pop to your party with some edible flowers!