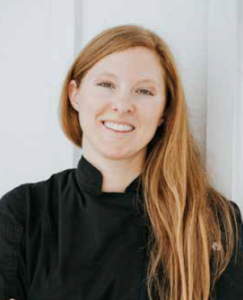 On vacation visiting a girlfriend on the Garden Island, Erin Keller got a taste of paradise and an introduction to her future husband. Love was the perfect excuse to return several times during the summer of 2015, and to apply for an executive chef position at a resort restaurant in Princeville. She got the job and became a Hawai‘i resident by October. A few months later, the couple decided to go all in and open a restaurant together. Today at The Local Kaua‘i, she runs the back of the house while her husband, Jose, handles business in the front.

Keller has two large branches of wheat inked on her left forearm that are tattooed in Realism style, known for its signature intricate detail.

Right before her official move to Kaua‘i, she walked into a Portland tattoo parlor with stalks of wheat in her hand. The artist photocopied the stalks and traced them on to her arm to duplicate the actual size and detail of the grain.

Cooking professionally since 2006, Keller spent most of her time crafting dishes for inspiring chefs in Portland, Oregon, before owning her own spot. “I found fresh wheat at the Farmers Market one day in a flower arrangement and it was the most beautiful thing I had ever seen,” she says. “I was slinging pizza out of my mobile wood-fired pizza oven and I was in full-on pizza-loving, wheat-loving, pro-gluten mode.” Before saying goodbye to the City of Roses, she scheduled a tandem tattoo appointment with her best friend, Amanda, the executive chef at Portland City Grill. “We both got tattooed on the last day that I lived in Portland before I moved to Hawai‘i,” she says. “Great memories all around.”

In our 2015 Winter “Skin” issue, edible Hawaiian Islands ran a story called “Culinary Ink,” featuring five incredible local personalities with food-related tattoos. It became one of our most popular issues to date, but we regretted the fact that we didn’t get a chance to highlight any inked women (though not for lack of trying!). This is the long overdue follow-up, where we showcase ladies from four islands who love food so much they’ve creatively stamped themselves with captivating foodie artwork.