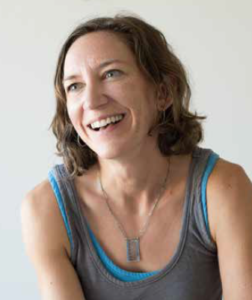 Dabney Gough spent her childhood on a Virginia farm that has been in her family for six generations and marks the spot where she first fell in love with food. “I was spoiled early on by the bounty of locally grown produce from our garden and nearby,” she says. “Perfectly ripe, sun-warmed tomatoes, amazingly sweet Halifax cantaloupes, and mulberries right off the tree.”

In San Francisco, she worked for Bi-Rite Market in the Mission District and co-authored two cookbooks. These days she rocks the role of marketing manager for Hawaiian Ola, a local company that uses responsibly grown ingredients to make healthy beverage products. “Food is so much more than fuel,” says Gough. “The choices we make about food tell us who we are, and what we care about.” 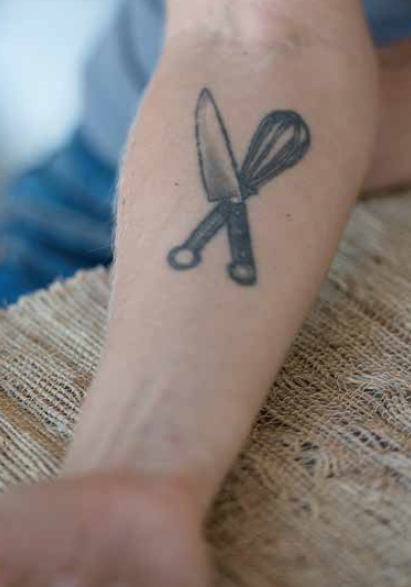 Gough designed her tattoo: a whisk and a chef’s knife crossed in an “X” shape, like a coat of arms. “I wanted something iconic and simple that spoke to the tools of my new trade,” she says. “There’s a kind of yinyang aspect to it too… the knife divides, whereas the whisk unites (it can fix a broken sauce, for instance).”

She got her one and only tattoo while training at the California Culinary Academy in San Francisco, at Black + Blue Tattoo, a woman-owned studio in the Mission District.

After quitting a “comfortable but uninspiring” corporate job to do the culinary program full-time, Gough wanted to commemorate taking a leap of faith to follow her passion. “I got the tattoo to remind myself that I could take measured risks like that and still be OK,” she says. “After I got it, my mom warned me that potential employers might not hire me as a result. I laughed and said I didn’t want to work at those kinds of places anyway!”

In our 2015 Winter “Skin” issue, edible Hawaiian Islands ran a story called “Culinary Ink,” featuring five incredible local personalities with food-related tattoos. It became one of our most popular issues to date, but we regretted the fact that we didn’t get a chance to highlight any inked women (though not for lack of trying!). This is the long overdue follow-up, where we showcase ladies from four islands who love food so much they’ve creatively stamped themselves with captivating foodie artwork.