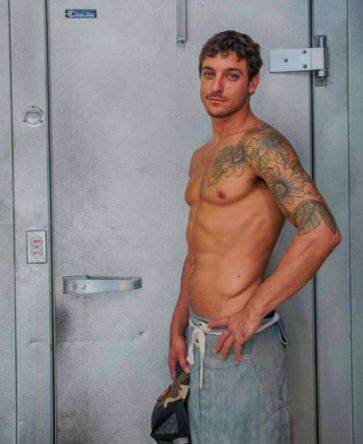 Jeff Scheer moved to Maui 10 years ago after seeing a video his cousin put together of his three years living on the island. “I watched it and said to myself, ‘That looks insane. I gotta check that out,’” he says. “So I got on a plane and was here. I didn’t know anybody, I didn’t know how long I was going to stay, I just came and never left.” A couple of years after moving, Scheer, 33, started Maui Executive Catering, utilizing the fresh ingredients grown on Maui.

He has an artichoke on his left forearm and a lilikoi vine right above it, snaking up his arm, across part of his chest, over his shoulder and down his back. 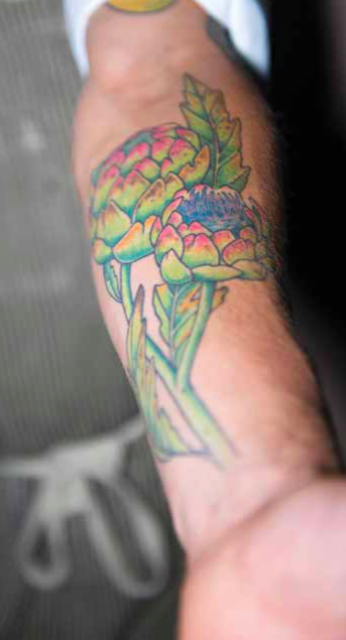 Scheer got the artichoke tattoo two years ago and the lilikoi vine six months ago, both done at Pāʻia Tattoo Parlor.

Growing up in Athens, Ohio, Scheer ate artichokes at every special occasion. His grandmother liked to serve it simply steamed with a homemade hollandaise sauce. “It reminds me of something we always had at the dinner table growing up,” he says. “It was always a race to get to the heart!” For his catering business, he works with two farms, both in upcountry Maui about 3,500 feet above sea level, which grow artichokes. “When you’re on the farm, surrounded by artichokes, it fills you with this sort of peacefulness and all your stress goes away,” he says. “There is no noise except for the bees buzzing, and the views are amazing.” He added the lilikoi vine six months ago because he loves its beauty and flavor. “The flavor is so unbelievably intense,” he says. “And when balanced with sweet and spicy things, the opportunities are endless.”